Mimics, An Unnecessary Work: A Needless Interview With Philip Reed

The dastardly Philip Reed is creating new tabletop RPG content. Again. This crime… er, time, he’s creating Mimics, An Unnecessary Work. This Kickstarter will fund foldable pocket maps “designed as a completely worthless collection of ideas that gamemasters may turn to when tossing a mimic into their next dungeon.” Starting with two pocket maps, the first is about mimics, the second is about gelatinous cubes, a group of oozes that never did anything digestive to anyone! Nevertheless, here we are with Philip printing his innermost thoughts about these wonders of dungeon ecology. Sigh. Anyways, I asked him about these and the stretch goals for the campaign and stuff. 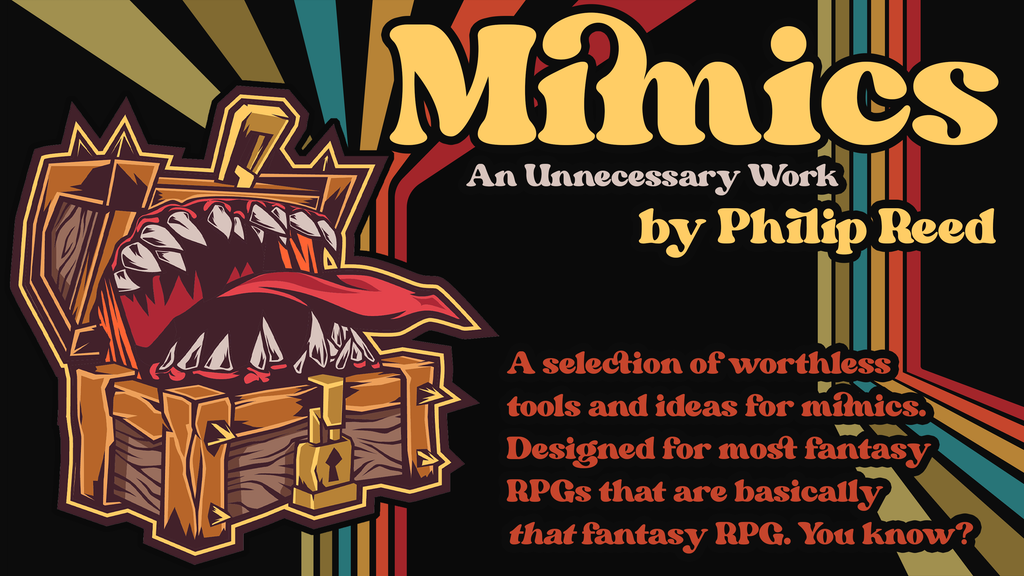 EGG EMBRY (EGG): Should we even discuss your new project on Kickstarter? Will it create things of value?
PHILIP REED (PHILIP): I suspect everyone would be a lot happier if we spent our time talking about the original Unearthed Arcana and how it features the strangest polearm fetish this side of the middle ages. As to creating value: I can honestly say I've never made anything of value in my entire life. What I can promise, though, is that my latest project is the most worthless endeavor of my career.

EGG: “Most worthless”?! As suspected! This project is creating two foldable pocket maps of content. All I can wonder is, TWO pocket maps?! One is all about mimics? That sounds… Well, at least it’s a not a pocket map of gelatinous cubes because that’d be ridiculous! Am I right? Oh, wait… Hmm… Well… So, uh, ignore that. Let me ask this, why write about mimics?
PHILIP: A mimic made me do it. True story! Mimics are silly, kinda dumb, and I felt that my inability to produce anything useful would be a perfect match for the mimic. After all, who better to waste the world's dwindling supply of paper on a goofy monster than me? Plus, I was basically finished writing everything before I even realized that I was writing about mimics. 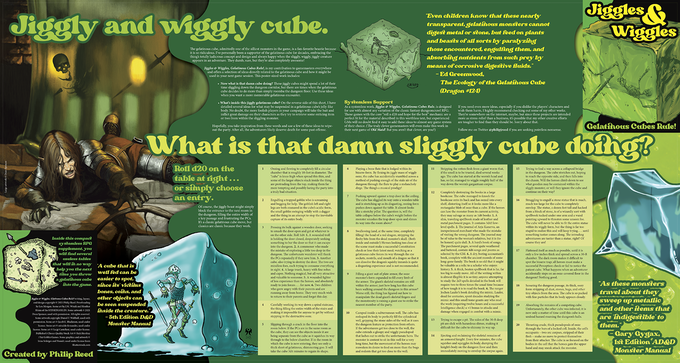 EGG: You’re designing some more content as stretch goals, correct? What new, unnecessary concoction have you dreamed up?
PHILIP: I have a bunch of useless arctic/winter encounters and far too many bad dungeon encounter ideas. Those are two separate pocket map designs, both of which are even worse than the mimics and gelatinous cube titles. (Which is why they are stretch goals. No one would ever want these, so I have to try to give them away.)

EGG: For those that don’t know, what is a pocket map format?
PHILIP: Take a sheet of paper (in this case, roughly 29" wide by 22" tall) and fold it up a bunch. Once folded, you've got an eight panel by three panel sheet. Then, glue two cardstock 'covers' to the paper. Everything folds down to about 4" x 6" in size. Oh, and there are things printed on both sides. (Though it would be more valuable to everyone if I left both sides completely blank.)

EGG: I backed your last Kickstarter, Tome of Skulls, and you gave me an advance review copy of the product at Origins Game Fair. Thank you, by the way, both copies were outstanding. Folded up, this product is the size of a Hallmark card, but opened up, it’s huge! You have to see it to know how much content it offers. What inspired you to experiment with this type of product?
PHILIP: Thanks for supporting my useless creative efforts!!! I love to experiment with formats (this year, I've released a vinyl record with an adventure, a large accordion book that opens to almost 4' wide, and even a greeting card-sized hexcrawl), and the pocket map is the latest odd format I've run across. When I looked at the website, I instantly thought about how much fun it would be to design a poster-sized something. Tome of Skulls, a collection of skeletal foes produced under the third-party Mörk Borg license, was even more fun than expected, which led directly to the latest campaign.

EGG: Because of the size that a pocket map expands out to, does that give you more room to detail impressive pieces of art?
PHILIP: Absolutely! With Mimics, An Unnecessary Work, I was trying to create something as attractive to look at as any RPG work out there. I failed, but I can say that the pocket map format gave me plenty of room to spotlight my failure. The graphic design is almost as worthless as the writing! I treated all four pocket maps' design (core titles and stretch goals) more like a magazine than a traditional RPG book. The large-format gave me more freedom than if I had gone with a traditional letter-sized page. 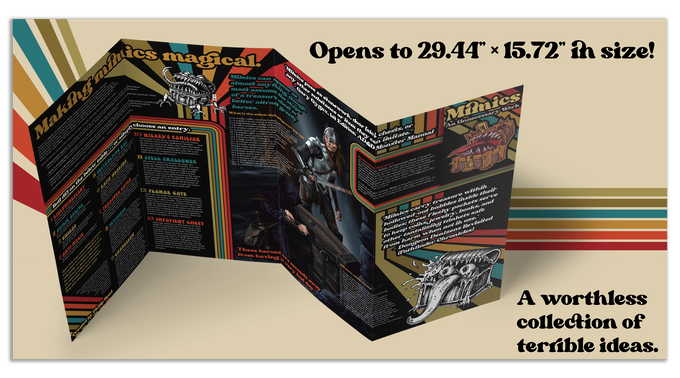 EGG: Beyond this Kickstarter, what else are you doing with your, clearly, overabundant free time?
PHILIP: Playing vinyl records (the new Dynatron record, Origins, landed recently and is spinning as I write this), working on upcoming projects, and being thankful that I don't have to spend hours in Austin traffic every single day. Plus, as a bit of extra fun, devoting too many hours to my day job where I pretend to know what I am doing.

EGG: Thanks for talking with me about this. Where can fans follow your work?
PHILIP: If you want to follow actually good work, then the Steve Jackson Games website is the best place to look. At least at the company, there are enough people between me and the world to block my worst ideas from escaping. (But then, there are times when awful things -- such as the Gelatinous dice game and Hack & Slash game -- find their way onto game tables, so no process is perfect.) To successfully avoid my personal projects, keep on not following me on Kickstarter or Twitter.

Mimics, An Unnecessary Work, for Use With Fantasy RPGs from Philip Reed Games
“This is completely worthless and should be avoided. You do not need a haphazard and random selection of mimic ideas, right?”

Supporter
Thank you, although I am worried that someone might see this and not realize that they should ignore the work. It's horrible!

How did you manage to do an entire interview with your tongue in your cheek the whole time? Must be sorcery.

Terry Herc said:
How did you manage to do an entire interview with your tongue in your cheek the whole time? Must be sorcery.
Click to expand...

Decades of practice as a complete and total fraud of a "creator" in the industry. Shhhhh. Please don't tell anyone.

One if by land, two if by sea, three if by air: An Interview with the Creators