On Monday, right in the middle of recording our latest podcast, a package from WotC arrived - which, incidentally, I opened live on-air in an audio-only medium, which is always the best way to show off a colouring book. The package contained a Dungeons & Dragons colouring book (illustrated by Todd James) called Adventures Outlined, which is apparently due for general release next week (it should be in some local game stores already). 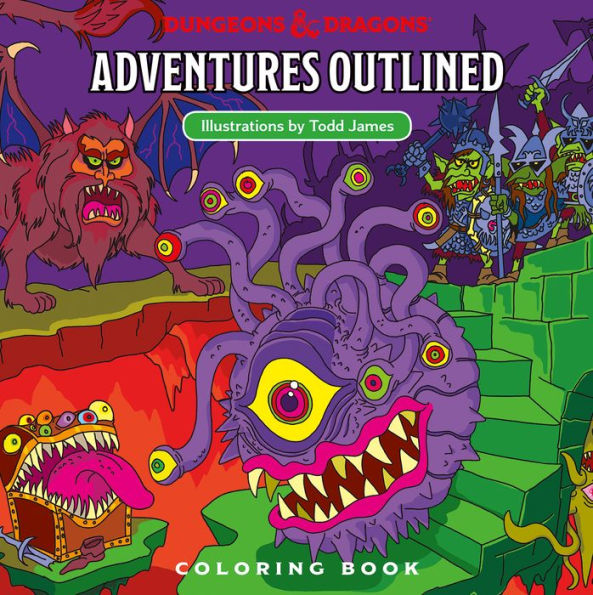 I'll be the first to admit that I'm probably not the target audience for a colouring book, but I do find this quite a fun little product. There are about 40 pieces to colour in, including a whole bunch of D&D monsters -- I see everything from yuan-ti to mind flayers to flumphs. Each is accompanied by a little ditty from Adam Lee, and these make me chuckle. Some are short descriptions:
"Only once in a thousand years does a tarrasque rise up from its slumber to wreak havoc on the world. Its scream can be heard form miles away as it smashes through stone walls, devours castles, and eats the people inside like wriggling popcorn."​
Others are tiny narratives:
"The most amazing thing about Kronor the Brave's victory over Slorp, the sahuagin warlord, was not that we won with his sword in his left hand, but that after the fight was over, Kronor's magnificent hair wasn't even wet."​
And even a little poem or two:
"Owlbears are fuzzy,
Owlbears are cute.​
They're as tall as three people,
In a fur suit.
Owlbears are floofy,
Sweet as can be,
No, wait! Is that owlbear
Gonna eat me?"​
If you have kids, or if you like colouring in, this little book costs $16.95. It's not exactly aimed at the hard-core grognard, but I'll bet that a bunch of people will have fun with this one. And who knows, it could be a child's gateway into a lifetime of tabletop gaming! 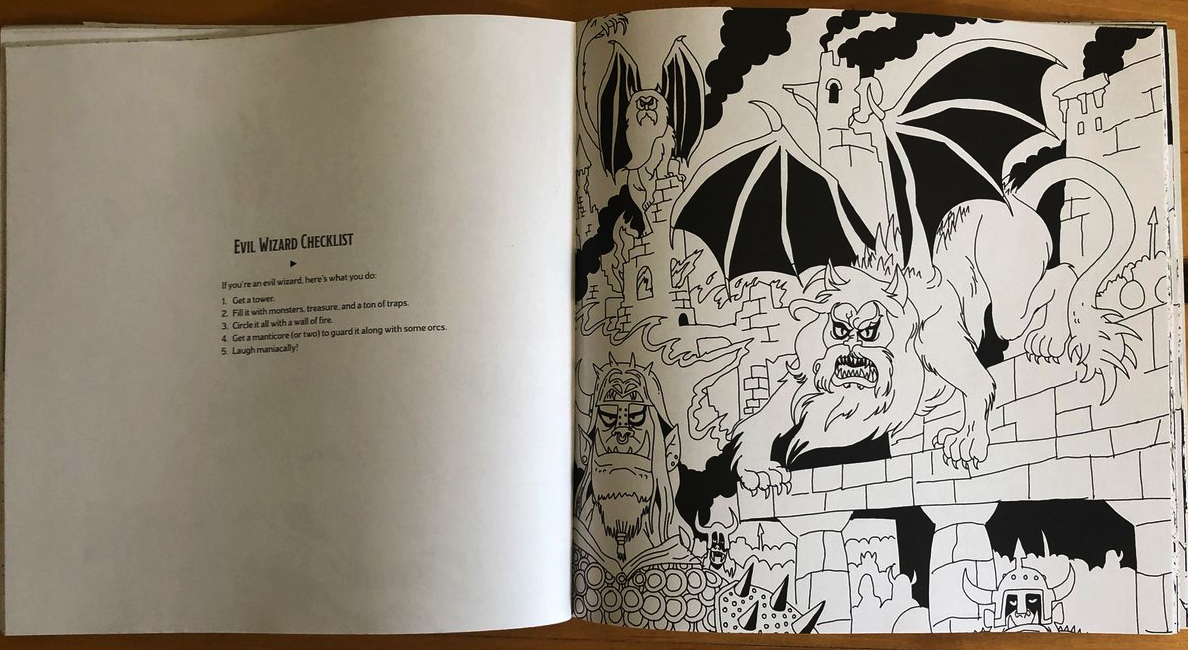 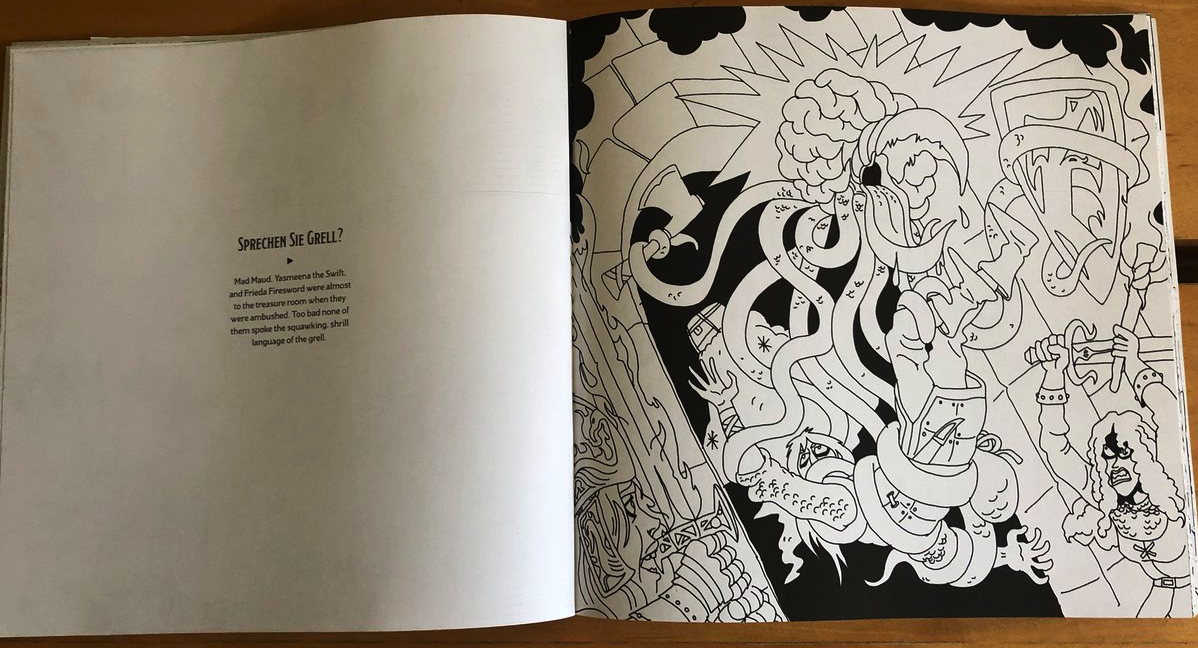 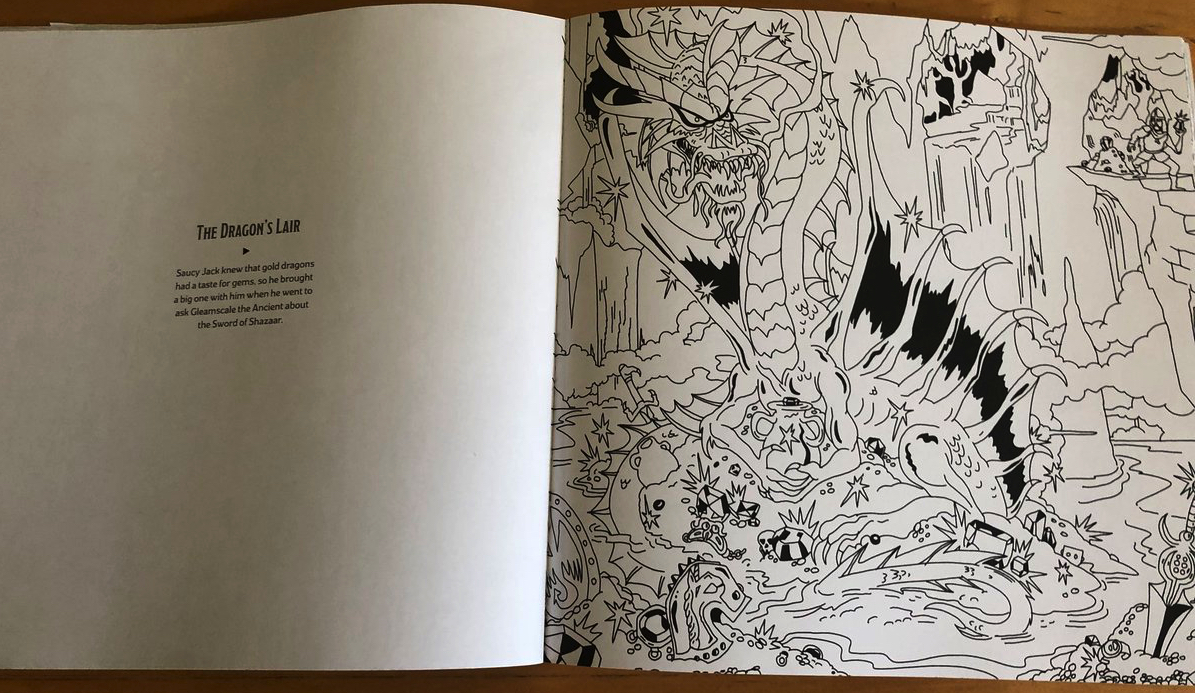 I like the idea. Not a fan of the art style, even by DnD standards.

Neat. I dig the sense of whimsy and humor.

Apparently Adam Lee used to work for Hallmark Greeting Cards, so I'm not surprised to see him credited with the captions.


I think it works for a colouring book. Lots of strong blocks of colour without as much need for shading.

ad_hoc said:
I think it works for a colouring book. Lots of strong blocks of colour without as much need for shading.
Click to expand...


Agreed. It's more cartoony than we're used to in D&D products, but I think it makes a lot of sense for a coloring book.

With the line art and all the purples and greens in the top illustration, it immediately reminded me of the cover of the Moldvay D&D box. (This one: https://rpggeek.com/image/504096/basic-dungeons-dragons.) Which I guess means that it has won my endorsement.

Yeah, it looks like a pretty typical art-style for a coloring book for around the pre-adolescent age range. Maybe a bit more cartoonish than usual, but not overly so. My daughter's too young for this now but I'll keep it in mind as I'm always interested in finding new ways to introduce fantasy to her. Right now she's currently got her heart set on dressing up as the Goblin King for Halloween.

I am glad for this news post, as it has saved me the money from buying this. While I admit that these are better than what I could produce, I am still not a fan of the visuals they went with. I prefer the old coloring book they had back in 1979, "The Official Advanced Dungeons & Dragons Coloring Album" made by Troubador Press. While the art looks very 1st Edition, I think it is better than this one. Maybe if I was 30 years younger than I am, I might like this one.

I hope it does well, though.

Ha ha, I used to color my old adventure modules, as well
It's actually the only reason I decided to keep them.

I never colored in my D&D books, but I was a fastidious kid. Heck, the chocolate milk stain on my original DMG still makes me unhappy, decades later.