Cyberpunk Slice: Near Futures & Hackable Selves for Modern AGE from Green Ronin Publishing is a toolkit to add the neon and dystopian futures like Blade Runner, Mirrorshades, Akira, Max Headroom, Ghost in the Shell, The Matrix, Altered Carbon, Cyberpunk 2020/2077/Red, and many other stories touching on the lowlife and high tech world of a failing future. Written, designed, and developed by Malcolm Sheppard and Steve Kenson, this takes the Modern AGE system in a new direction. I spoke to Malcolm and Troy Hewitt about this project, what the toolkit includes, how fans and creators can use it, and what’s next for Modern AGE. 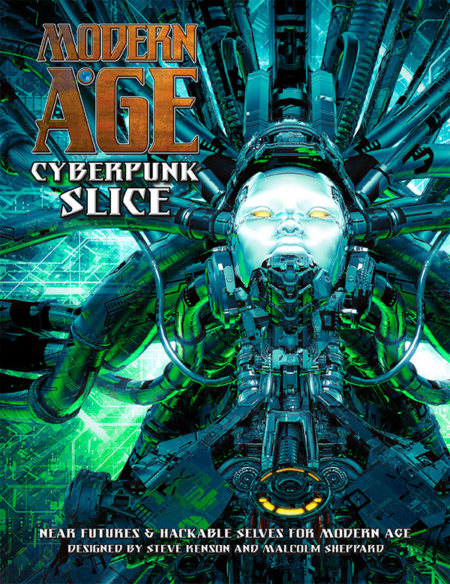 EGG EMBRY (EGG): Malcolm, thanks for doing this interview. Can you share the pitch for Cyberpunk Slice: Near Futures & Hackable Selves for Modern AGE from Green Ronin Publishing?
MALCOLM SHEPPARD (MALCOLM): It’s cyberpunk. For Modern AGE. Seriously though, cyberpunk is a diverse, relevant, and hugely popular genre, and has long been requested by Modern AGE gamers, so I wanted to help them scratch that itch while giving them a wider set of tools than usual. This is why, for example, when we discuss the difference between synthetic and biological characters (yes, you can use these rules to create and play androids, or someone who moves from body to body) we leave the exact divide up to the GM. This is a toolkit covering the necessities of the genre in a compact, 60-page form.

EGG: For those that are new to Modern AGE, can you share the core of the AGE design and how it works?
MALCOLM: Roll 3d6 + ability score (usually rated -2 to 5 or so) + focus (like a skill, usually +2 bonus) versus a target number. If any two dice have the same number on the face a third, visually distinct die, called the Stunt Die or Drama Die depending on the game, provided stunt points equal to the number on that die. These can be spent for various special effects and actions, such as forcing someone to tell the truth, blowing up a car’s fuel tank, shooting through a gap in your opponent’s armor, and so on. AGE games use levels, but Modern AGE doesn’t use classes–a level is a balanced way to select character improvements–but other games, such as Fantasy AGE, do. AGE is designed for ease of use and dramatic adventure.

EGG: This book is a toolkit instead of a full setting and rules, correct? What options can fans expect to find in its pages?
MALCOLM: Yeah, it’s a toolkit with no setting, and rules such as those for adopting new bodies, utilizing cyberspace, automation, branding, talents and specializations to cover anti-cyborg fighting styles and corporation-level crime syndicate affiliation, as well as suggested backgrounds and professions to work up a character within the genre, are all in there. Plus powered armor, drones, and more. Where practical, we’ve presented multiple explanations for things. For instance, the cyberspace rules present multiple levels of resolution and varying rules by interface, from text to being in a full alternate reality. That isn’t everything. It’s a dense little book. 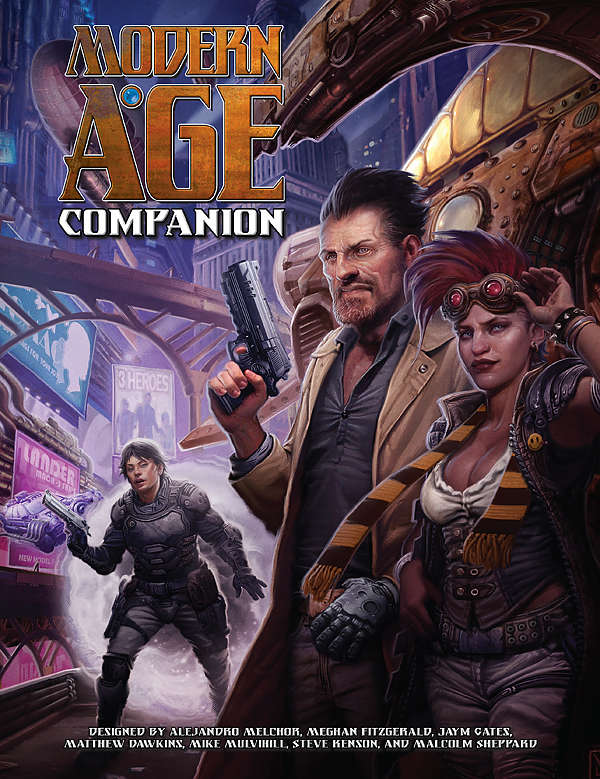 EGG: This isn’t the first time Modern AGE has brushed up against cyberpunk. There are some elements to be found in Modern AGE Companion and Threefold, correct? What does this book say about the genre that the others did not?
MALCOLM: Those books provided important inputs for this one, but neither of those books is really focused in the genre. The Modern AGE Companion has power rules and bits and bobs that form the mechanical basis for augmentations like cyberware, while Threefold has an organization, Aethon, which enhances its agents for operations controlling the level of Earth technology, exploring alternate universes, and dealing with the secret influence of extraplana…you should get Threefold, basically. Plus, don’t forget World of Lazarus, which combines cyberpunk, technothriller, and other elements in a neofeudal context. Cyberpunk Slice actually talks about the genre, however. I have kept high level discussion as compact as everything else–again, we really wanted this to provide a lot of stuff in a 60-page package–but we talk about cyberpunk as a literary genre and its evolution, and provide material inspired by that. This is why the equipment rules include branding, which is a descriptive tactic in the cyberpunk canon, with “Braun drones,” and so on. In many ways, this is a Modern AGE counterpart to the similarly focused Fantasy AGE Trojan War, in providing the necessities to work within a genre (Troy is a “setting,” but also really a genre because of centuries of retelling) without putting you on the rails of specific setting principles beyond those that really emphasize the genre itself.

EGG: Are there specific cyberpunk works that influenced this book?
MALCOLM: Everything you’ve heard of! I mean, a general treatment has to look to the most notable works, so certainly the Sprawl and Bridge trilogies, works from Bruce Sterling like Islands in the Net and my fave of his Schismatrix, Blade Runner, Altered Carbon, the Westworld series, and so on. But the goal was to think of common elements more than homage. My weakness is that I haven’t read much of Neal Stephenson. Really though, cyberpunk has penetrated into modern technology, esthetics, and social issues that more than ever it represents SF as a kind of exaggeration of the present instead of speculation. However, this is a short supplement that takes a pragmatic approach, so this is really represented in our choice of game elements to cover in a traditional roleplaying context, so don’t expect rules to, say, cover the tension between expertise as identity and a sense of alienation of purpose I think is a big part of Neuromancer. It ain’t that kind of ride, though funnily enough, some of the emergic options for Relationships in AGE design could do it….

EGG: There’s a history of cyberpunk included in the book, what does that section offer fans?
MALCOLM: Like I said, it’s compact, but talks about the genre’s roots in things like the Turkey City Writer’s Workshop and onward. Mainly, though, we talk about how the evolution of the genre can help you make a setting and plan your games.

EGG: Green Ronin has the AGE Creators Alliance at DriveThruRPG. Can you share what the Alliance is? Are you hoping to see fan-made cyberpunk options there?
MALCOLM: This is our community content program for the Adventure Game Engine. Troy manages this program and I think he can describe it better than I can. Troy?
TROY HEWITT (TROY): You bet, thanks Malcolm. The Age Creators alliance is a community content program we provide in partnership with DriveThruRPG. Essentially, it is a framework for individuals to create and sell original works as PDFs that are compatible Adventure Game Engine titles. The program focuses on our Fantasy AGE and Modern AGE lines right now, but other AGE titles just may find their way into the program at some point in the near future. We’ll keep you posted on that news. DriveThruRPG has templates for both Fantasy AGE and Modern AGE, as well as all the information, guidelines, and rules that aspiring publishers need to know. 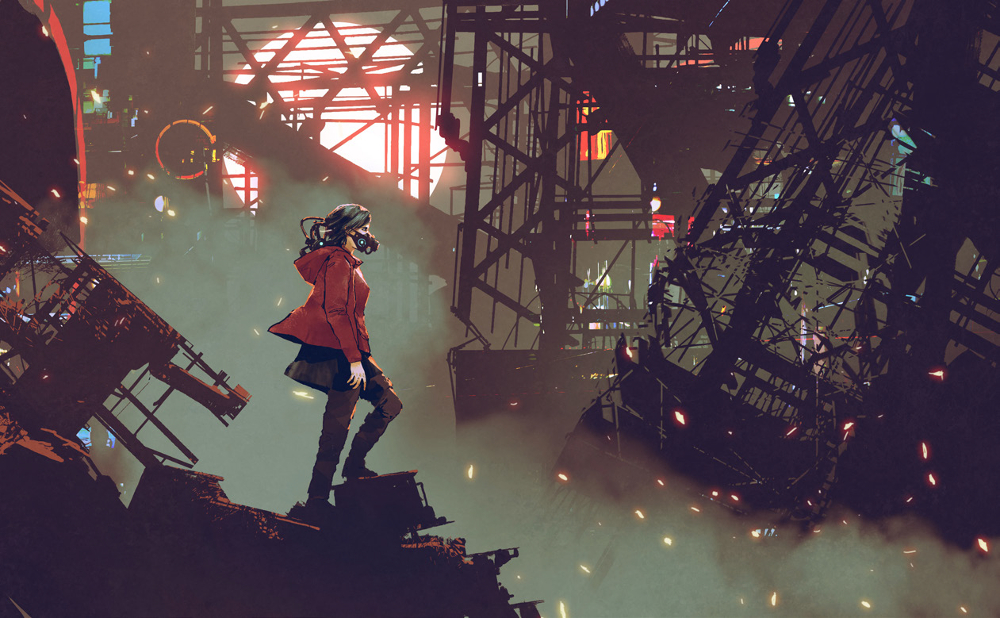 EGG: With the crowdfunding success of cyberpunk RPGs like TOKYO : OTHERSCAPE from Son of Oak Game Studio, Altered Carbon: The Role Playing Game from Hunters Books, and BLADE RUNNER – The Roleplaying Game from Free League Publishing, are there plans to dig deeper into this subgenre and make more Modern AGE cyberpunk?
MALCOLM: Well it’s 60 pages, and in them we say this isn’t necessarily our final word on the subject. I held off doing this supplement for a while because a standalone cyberpunk RPG is certainly viable. If people want that, they should tell us! I have some ideas.

EGG: Beyond Cyberpunk Slice, what else are you working on? Anything you can share about upcoming Modern AGE projects?
MALCOLM: Our GM and advanced player’s book, the Modern AGE Mastery Guide, was released earlier this year, and it, along with the Modern AGE Basic Rulebook, Modern AGE Companion, and Modern AGE Enemies & Allies, represent our backbone of core rules releases. This will eventually be added to further with Modern AGE Powers, where we do a more detailed treatment of magic, psychic powers, innate powers, ritually activated powers, and extraordinary items with magical, scientific, and other origins. The Modern AGE Missions adventure line continues to grow, and Five & Infinity, an adventure series and generators for Threefold, will be collected for print, with a new section on generating other planes of existence not found in previous releases. And beyond that? I have a few ideas. I have also been thinking about various new standalone AGE games.

EGG: Thanks for talking with me. Where can fans follow you, Green Ronin, and pick up this PDF?
MALCOLM: You can get the PDF at the Green Ronin Online Store or at DriveThruRPG. I don’t really have a public social media presence anymore. Otherwise, I’ll have Troy contribute here again, as he knows exactly where to point people.
TROY: Folks can find us on Twitter, at @GreenRoninPub, they can also find us on Facebook. But we’ve got a couple new places folks can find us as well- We’ve got a TikTok, a Pinterest Board, and tons of new video content from the entire team across all our titles over at our YouTube Channel. You can always find us at Link Tree as well, which will also give you updates on the latest releases and live streams that we’ve got planned.

The Cthulhu Awakens funded earlier this year too.

I can't wait to get this and kitbash this together with Dragon Age to make Dragon Age: Cyberpunk!