Three new items have popped up on Amazon: two decks of Monster Cards (CR 0-5, and CR 6-16), and one of Magic Items! They all have a release date of 5th February 2019, though they are already available in local game stores and from Gale Force 9. 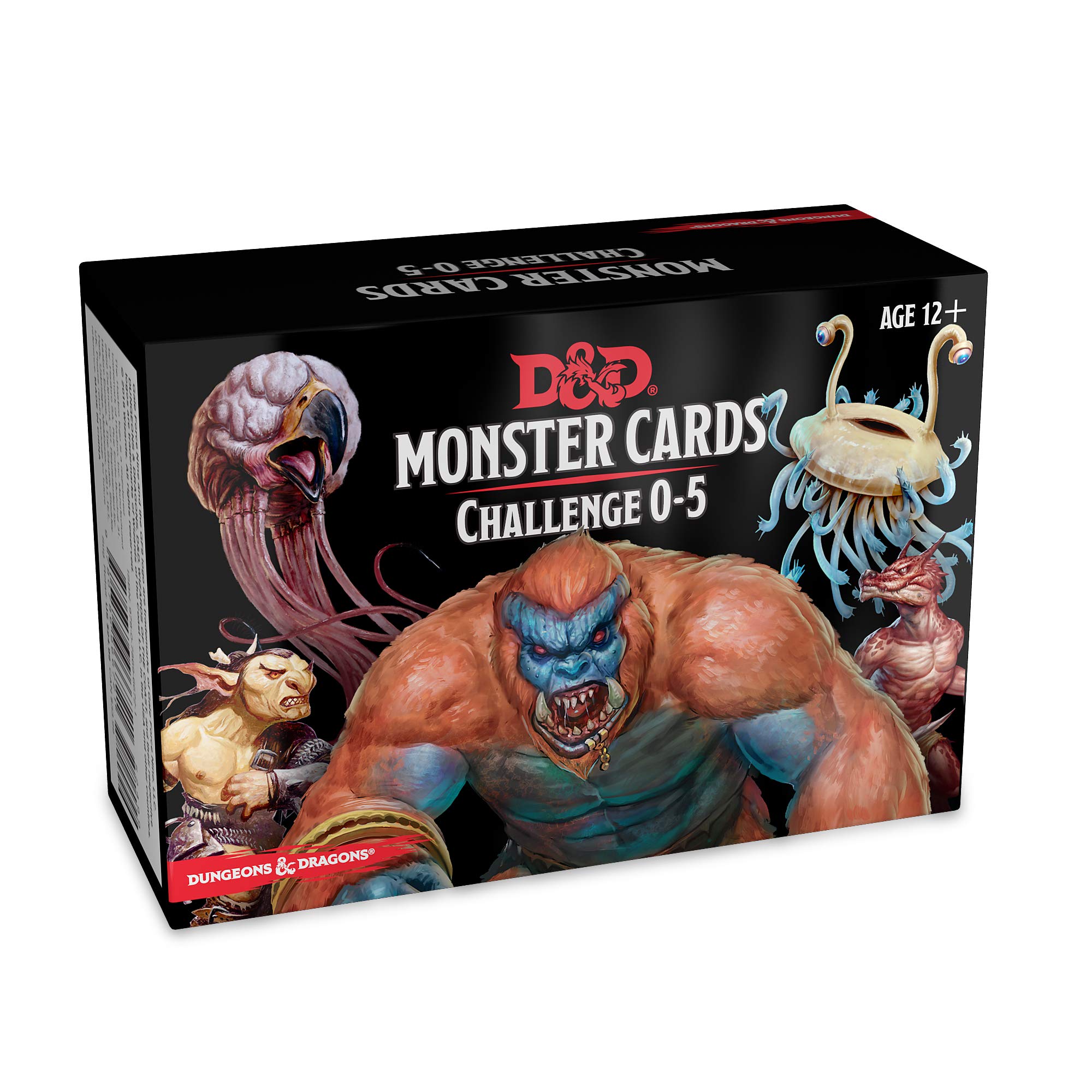 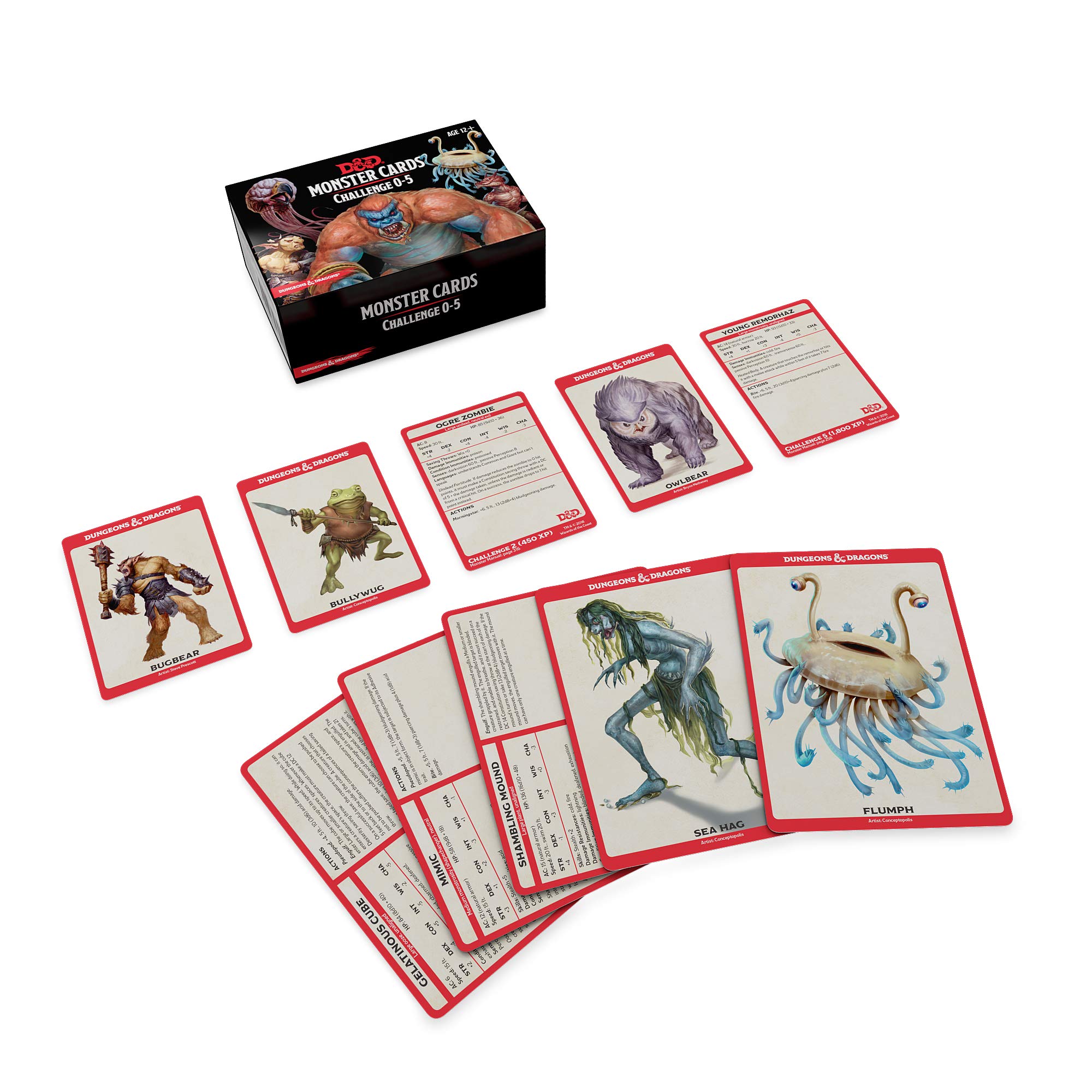 ​
"Monsters exist at the heart of every game of Dungeons & Dragons, and monster cards make accessing the information contained in the Monster Manual easier than ever.

Quickly organize the creatures your players might meet in your next game and avoid disruption during that critical encounter. Monster Cards are a fantastic way to keep the game moving, as well as to provide a challenge to adventurers both new and experienced.

- Contains 179 durable, laminated cards for a range of deadly monsters from the D&D Monster Manual with a challenge rating from 0 - 5.
- Up-to-date game statistics provided on one side, and evocative art of the item on the other.
- The perfect tool to help Dungeon Masters manage and reference their menagerie during play." 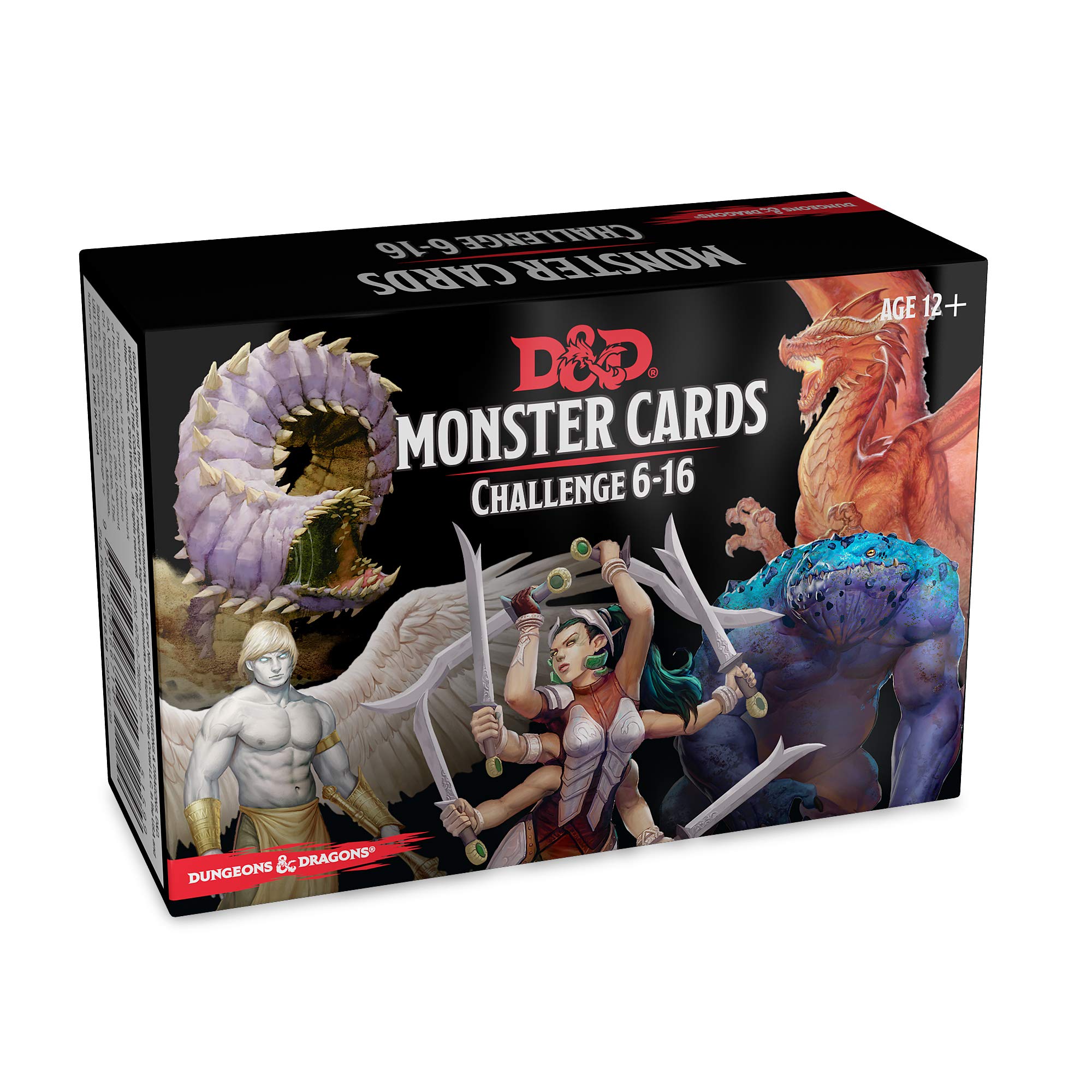 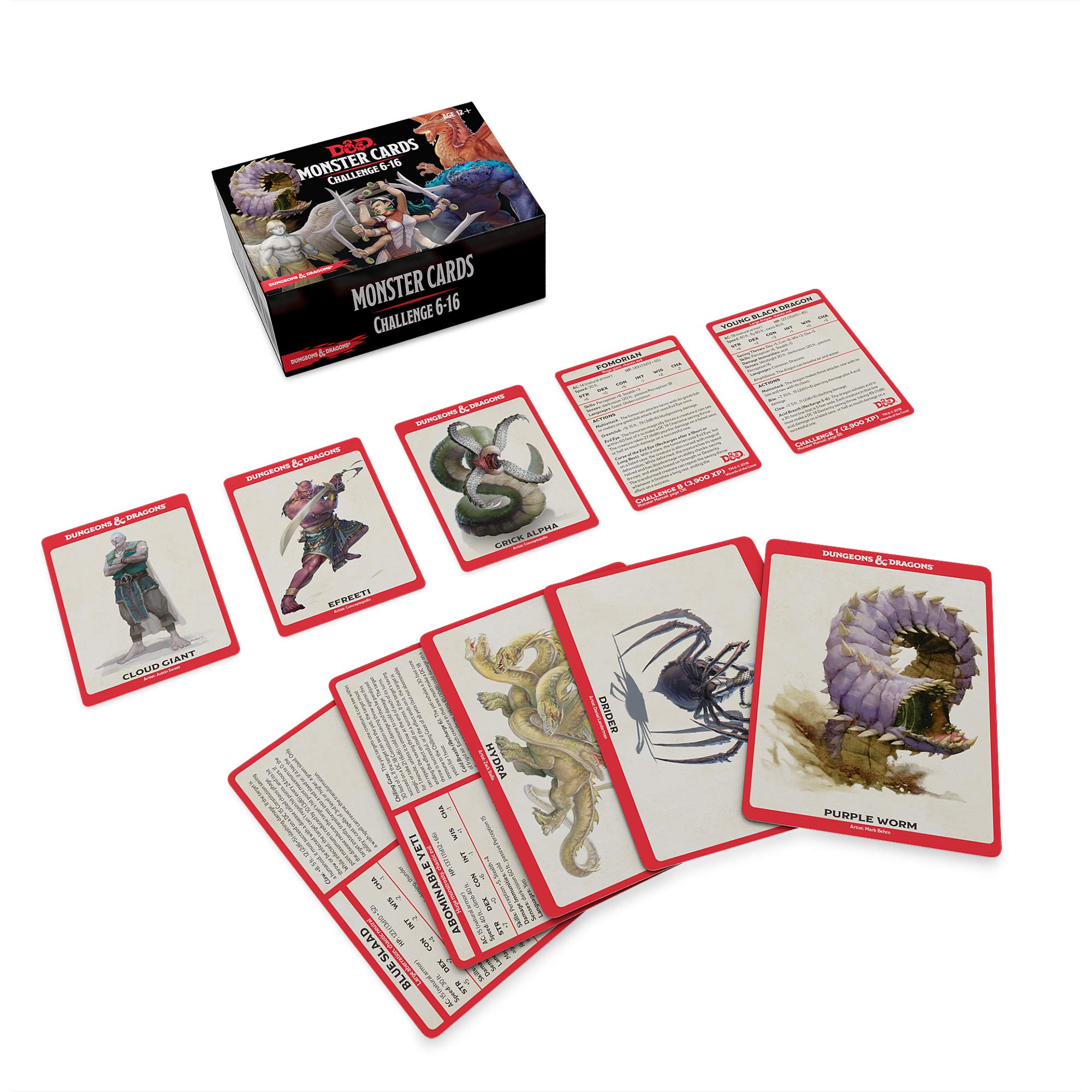 ​
"Monsters exist at the heart of every game of Dungeons & Dragons, and monster cards make accessing the information contained in the Monster Manual easier than ever.

Quickly organize the creatures your players might meet in your next game and avoid disruption during that critical encounter. Monster Cards are a fantastic way to keep the game moving, as well as to provide a challenge to adventurers both new and experienced.

- Contains 74 durable, laminated cards for a range of deadly monsters from the D&D Monster Manual with a challenge rating from 6 - 16.
- Official game statistics provided on one side, and evocative art of the item on the other.
- The perfect tool to help Dungeon Masters manage and reference their menagerie during play.
- Special double-sized cards featuring more powerful or complex creatures." 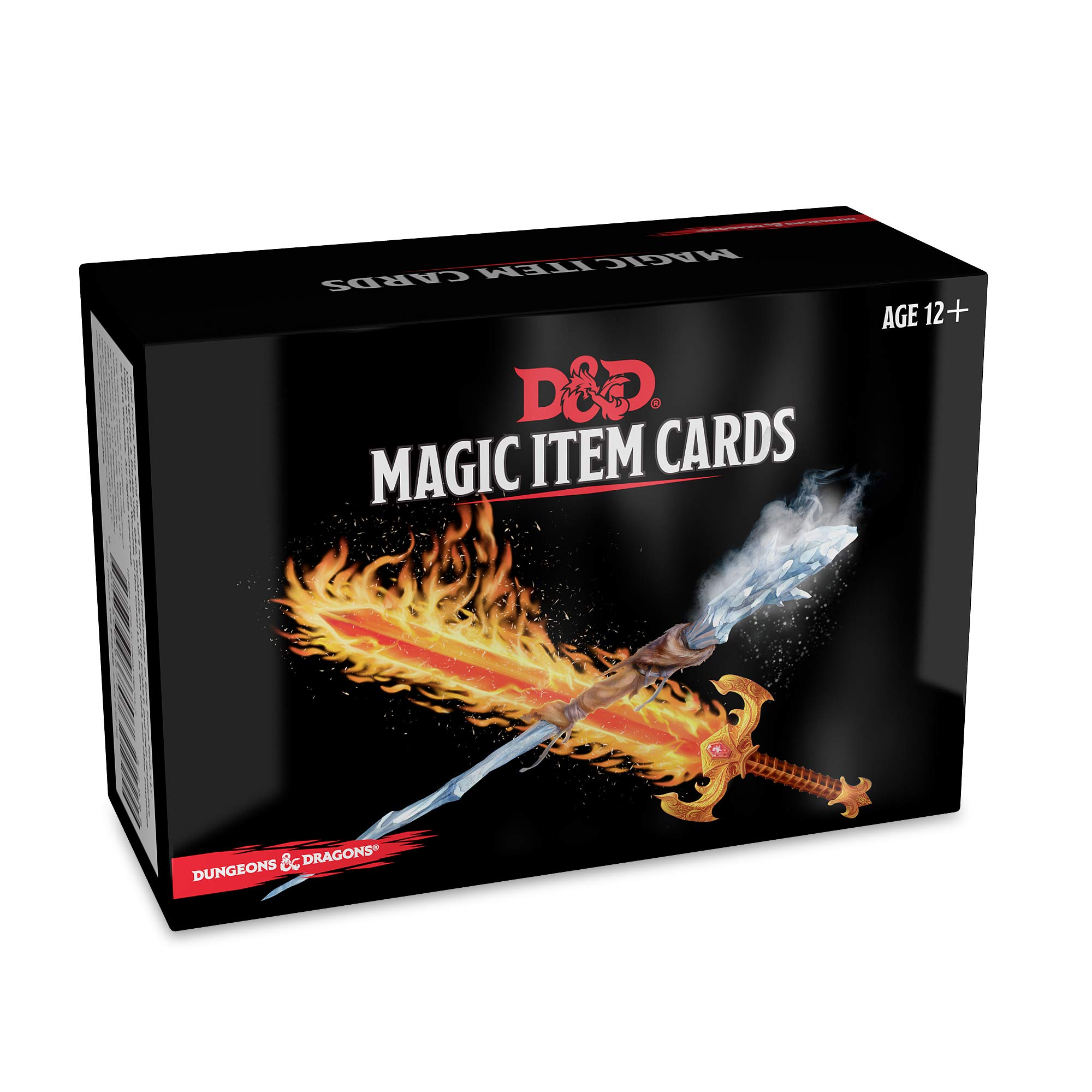 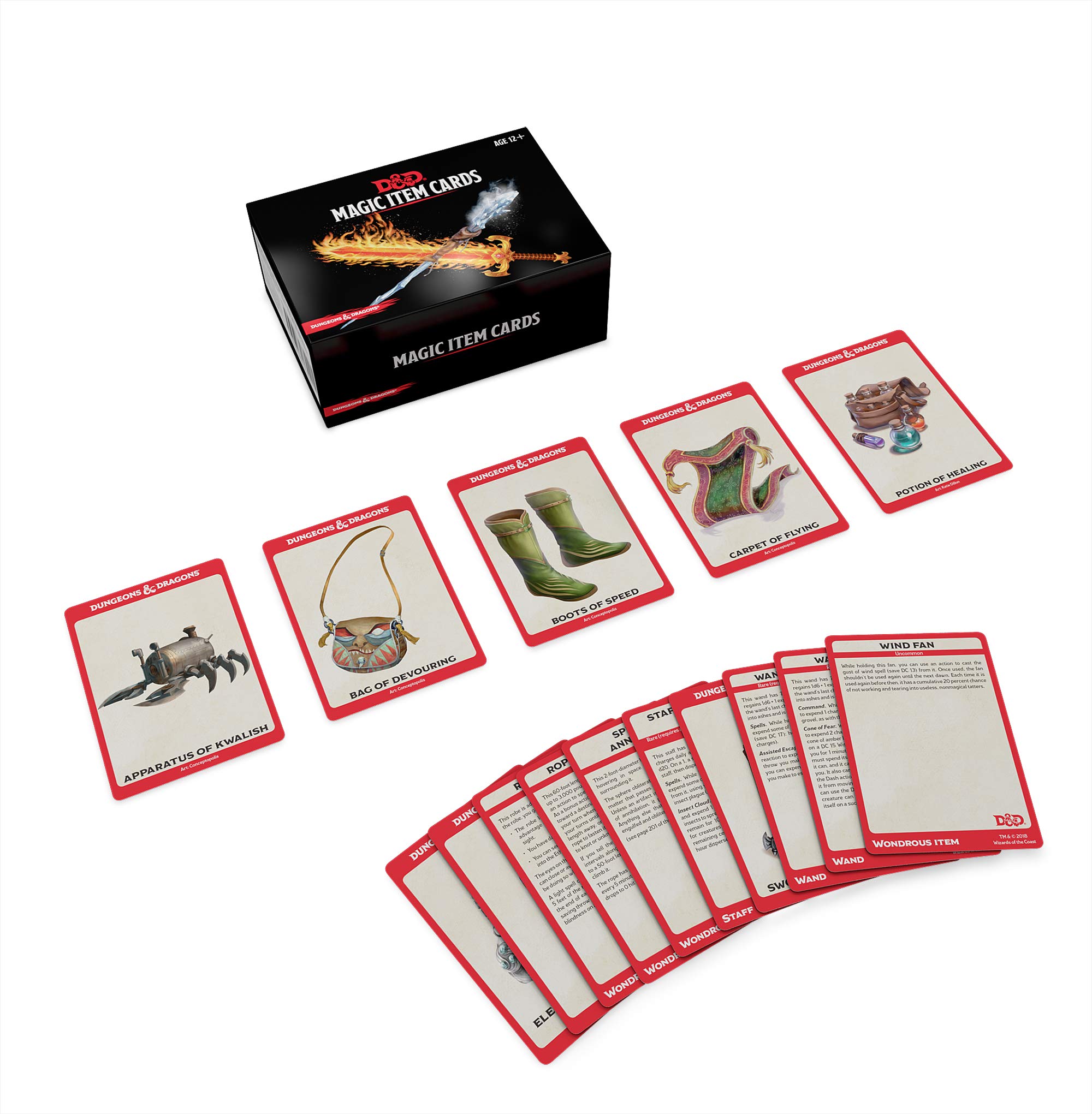 ​
"From adamantine armor to wings of flying, every magic item in the Dungeon Master's Guide is on a card of its own in this easy-to-use deck of cards.

Keep your game moving along when the adventurers find that crucial magical treasure, by providing your players with a card that is quick and easy to reference in and out of the game.
- Contains 294 durable, laminated cards for a hoard of magical weapons, armor, and other wondrous items from the D&D Dungeon Masters Guide.
- Official game statistics provided on one side, and evocative art of the item on the other.
- The perfect tool to help Dungeon Masters equip their villains or dole out rewards to their players' heroes."

Thanks to Oryzarius for the scoop!
Click to expand...

I greatly like the magic item cards idea, and I'll probably pick those up if only so I can scan and print copies to give to my players when they identify a found magic item.

The monster cards seem like a good idea, but only for really simple monsters. The stat blocks in the MM are already quite long for some monsters, especially the legendary ones with lair actions. I can only imagine the cards for those monsters (and even for NPC monsters like the Archmage) omitting substantial text to fit such monsters on the card. Some of the more spell or ability heavy monsters might end up having a lot of their abilities simply listed by name (with a recharge reference if relevant), and maybe with a book name and page number for reference, if we're lucky.

I have all of these. Just got the monster cards this week. They will be very handy, but do have some missing cards. For instance the human monsters like Thig and Veteran, and acolyte are not in the cards. Those are my most used villans.

The monsters with longer text and action are actually double sized cards. Image two of them put together side by side and thats the size.

I do really see it speeding up the game in the same manner the spell cards speed up the game.

If you watch us at Quests and Chaos I’ll be using all of these.

Staffan said:
There are some legendary creatures in there, e.g. the aboleth. I think the cutoff, other than CR, is stat block size. The beholder's stat block takes up about a page of the Monster Manual all on its own, so it would be impossible to put it on a card in any meaningful form that doesn't just say "See the MM".

What is more annoying is that they haven't included the common stuff - animals and NPCs. They are, after all, among the more common opponents. But perhaps that's for a later addition. Or perhaps they didn't have enough art of those.
Click to expand...


Huh. Stat-block size was my original thought as well, but then I checked a few Legendary monsters I knew and couldn't find any of them and assumed it was that. Guess I missed that some Legendaries are in there.

maceochaid said:
Did you get the higher level set? Because mind definitely had the Mind Flayer in it, used it in a session the other week.
Click to expand...

Thanks, I must have missed him when I was sifting through them. Pretty sure the Beholder wasn't there though, I specifically looked for that one.

I also got the cards, and I generally like them.

What annoys me is that some pictures are in portrait format and some in landscape, but the stats on the back are always portrait for the small cards and landscape for the large ones. So the format on front and back sometimes doesn’t match.

This is annoying because up to now I made my own monster cards and put them in a card holder so my players saw the picture (and the AC, btw) and I saw the stats. That doesn’t work with all of gf9’s cards, cause some stats will be tilted if the picture is upright and vice versa.

But I’m still happy with the cards, although my own are better

Publisher
We've got a deck of the beasts & it happens to be the deal of the day on DriveThruRPG.

We also have a deck of the core NPCs, plus about 30 we developed to make a full deck. And 3 other decks with the other core creatures broken up by type, 3 more decks of converted 3.5 creatures, and 3 large decks (~90 cards ea) of creatures from the Tome of Beasts.

Pros/Cons:
-Our cards aren't laminated, they have more of a MtG/trading card feel.
-We have every SRD creature in our 4 core decks. A couple span multiple cards, but not many. To fit the complete stats, when necessary we condense a trait/action to its core, but keep its meaning complete. Example: "Exhales fire in an 60' line that is 5' wide. Each creature in line takes 45 (13d6) fire, DC 18 Dex halves."
-As mentioned above, we have all the SRD creatures This includes the beasts, SRD creatures over CR 16, as well as adult and even ancient dragons missing from the official decks. We don't have non-SRD creatures such as beholders and mind flayers, but the official deck is missing some of those as well.
-We offer/include the PDFs so you can print more, or get them at a very low cost and print them yourself.
-The cost is comparable, and we don't print in China. (We use two US printers.)

Gift Ideas for the Game Master Who Has Everything