Following up from the D&D 5E hints included in recent Numenera shipments to customers, Monte Cook Games has just announced its new project coming to Kickstarter in March: a 5E-compatible sci-fantasy setting which allows you to play in settings like the Barrier Peaks or Numenera! 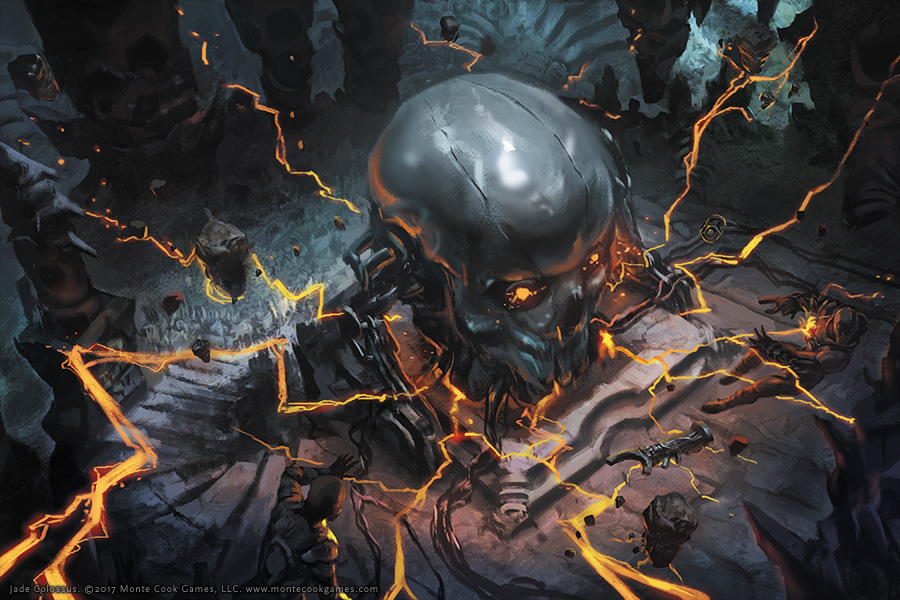 Since the very early days of tabletop RPGs, gamers have experimented with mixing a bit of science fiction into their fantasy. From Empire of the Petal Throne to Expedition to the Barrier Peaks, early adventurers into the realm of RPGs saw the amazing promise that mysterious and weird science-fantasy elements could add to their campaigns.

Nowadays, who knows science-fantasy better than Monte Cook Games?[h=2]Introducing Arcana of the Ancients[/h]Arcana of the Ancients will be your comprehensive guide to bringing science-fantasy into your 5th-edition campaign. This hefty, hardcover book will be filled with creatures, devices, character abilities, technologies, tips, advice, and adventure. All fully compatible with 5E.

Starting with a series of adventures that introduce the idea that there were previously unknown, incredibly ancient civilizations in the game world, the PCs themselves will discover first-hand the relics of a past so old that even the elves and the dragons know nothing of it. These ancient peoples wielded powers beyond comprehension, and the things they left behind harness those strange powers for the PCs to find and use—but they also present dangers and entirely new challenges. Once the secrets of the ancient past have been unlocked, weird new creatures and bizarre beings arise and only the greatest of present day champions will be able to defeat them—and only if they wield the arcana of the ancients.

What else might you do with Arcana of the Ancients? Advance (or create) your character with skills and abilities that take advantage of mysterious ancient technologies. Mystify your PCs with a one-off adventure that explores a crashed alien ship, an ancient high-tech outpost, or a portal to an amazingly advanced world. Convert the compelling Ninth World setting of Numenera to 5E and run adventures in a world replete with mysterious ancient works as powerful, unknowable, and weird as any magic. Build a new campaign world, or region within your setting, that includes ancient high technology as mysterious to your PCs as the magic they wield. Or simply use the many science-fantasy creatures, items, and abilities detailed in this book to give your campaign a new and interesting dimension.

Adventures, ways to integrate ancient civilizations into your campaign, new creatures, new items, new character abilities—Arcana of the Ancients will give you everything you need to integrate mysterious high-technology science fantasy into your game.

[h=2]The Ancient Worlds of Numenera[/h]Numenera is Monte Cook Game’s flagship tabletop roleplaying game. Set a billion years in Earth’s future, in Numenera the denizens of the Ninth World are surrounded by the ruins of prior civilizations whose technologies were so advanced they are indistinguishable from magic. It’s a game of exploration and discovery in a setting that combines science-fiction elements with a fantasy feel. Launched in 2013, with new revised Numenera Discovery and Numenera Destiny corebooks released in 2018, Numenera has sold over 80,000 corebooks (plus tens of thousands of additional corebooks in nine foreign languages), and spawned dozens of supplements chock full of amazing creatures, items, adventures, and setting elements. It is a top-selling RPG and the definitive modern science-fantasy tabletop roleplaying game.

The wonder and mystery of the Ninth World of Numenera is coming to your 5E game with Arcana of the Ancients. 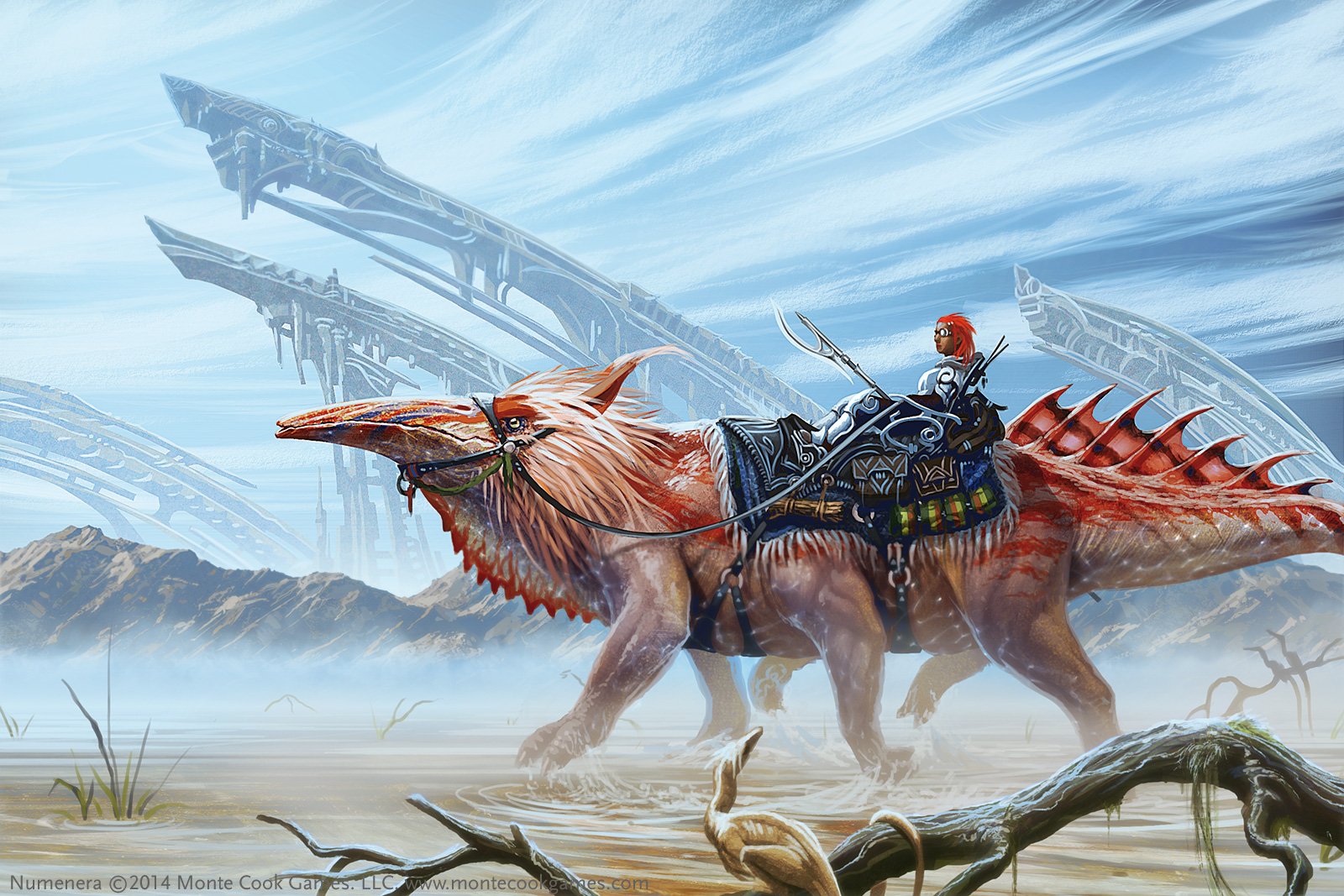 Awesome! I just recently discovered Numenera and it would be interesting how they convert that setting to 5th ed D&D. Also, just exploring science fantasy in D&D is nice.

Nice, I'm really looking forward to that. My own campaign world is very influenced by Wolfe, Moorcock, and others writing in that kind of "Dying Earth" genre. It would be great to have a sourcebook on this in 5E.

I've been thinking about making the shift from 5e to Numenera for a while now. This might be a good bridge for my players. Glad to hear about it!

To use Numenera with 5e, will it be enough to just own Arena of the Ancients or will the Numenera core book be required?

Kind of called it and I think its a savvy strategy.

Instead of making a full-on Numenera book, MCG is giving us a took kit so GMs can use it for whatever (just the concept of "unlocking" the tech is campaign fodder on its own).

Sounds like there might be some conversion notes to do Numenera "lite," but for a lot of D&D fans, that should be enough. But overall a win-win.

I like the concept, can't wait to find out more information about it.

I'm intrigued. I can see them doing a Numenera 5e setting book as a stretch goal.

Definitely worth snagging. I've been wondering for some time how to go about doing just this. They're gonna take a lot of the work out of it for me. Kudos to them for doing this.

I'll see what the reviews look like after the book comes out. There are a ton of concurrent kickstarters and game books that Monte Cook is putting out in the next year to two years, I'm concerned about fulfillment of later kickstarters.


Seeing as how many KS are late, MCG hasn't been too far off for the main KS project. Some stretch goals, though, have gone on for a while.

Let's see if I understand this. This isn't a Numenera d20, but a sourcebook to create your own d20 version of Numenera. Do we see a d20 version of monsters and creatures from Numenera? Al least homebred. And from other Monte Cook's titles (Predation or gods of the fall)?

It's great to see Monte Cook returning to the fold.

With all respect to his own games, writing for any other system than the 500 pound gorilla in the room feels kind of a waste...

I hope he makes a product next for the standard D&D fantasy, for those wishing 5E was more like d20 with a real uptime use for treasure (=a functional magic item economy)

This will be the book to get me back to running 5E, I think. I hope there is a Fantasy grounds or Roll20 version at launch or close to it.

Now that I think about it, this would be a great companion book to Eberron. With the tech side, you really know what's what with the ruins in Xen'drik and the monsters could be magical mutations in the Mourning.

SUPER excited for this.


This will fund, so it shouldn't be an issue picking up a copy later. But, MCG has a great track record with their kickstarters (and the quality of their products), so I'm all in once the campaign starts!

Monte Cook killing it like usual. The man is a genius.

D&D 5E [Legendary Games] One Last Call for 1.0a? The Mechanical Monsters 5E Quick-Starter is LIVE!