This is one of MCG's luxury products - at nearly 700 pages depicting a massive, detailed fantasy city, we're looking at $150 for the book, or $40 for the PDF, either for D&D 5E or Cypher System. 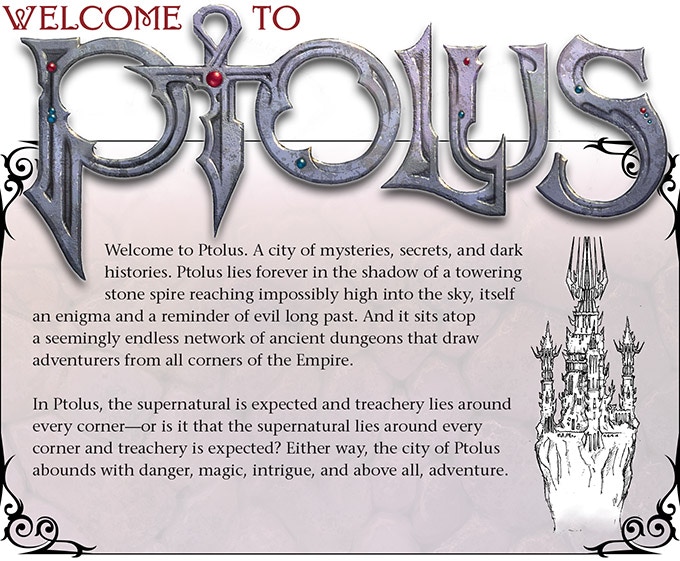 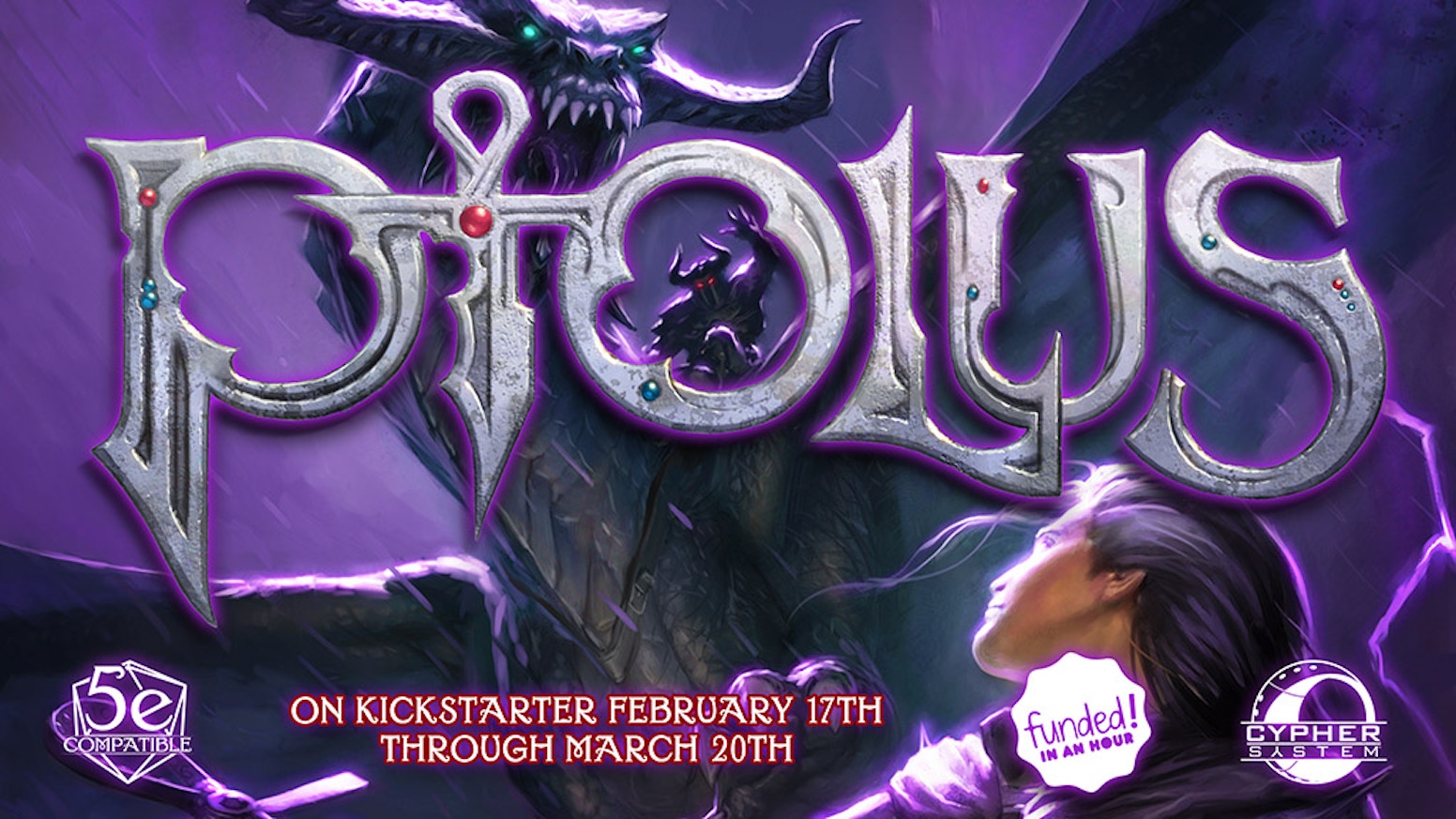 "Monte Cook’s legendary campaign setting, Ptolus, is being updated for both Fifth Edition and the Cypher System.

And that’s not all: Most backer levels include a massive library of every single existing Ptolus product. Get the original version of Ptolus plus 26 additional PDF titles—2100 pages of content worth over $250—so you can explore the city and plan for your adventures right away."

You can also download a free 32-page introductory Player's Guide.

For those looking for a physical copy of Ptolus for less than $150, I'm probably going to trade mine in at Noble Knight soon-ish and just using PDFs for the next year or so. I bet I'm not alone.

They're currently selling their copies for more than $200 a pop, but the Kickstarter will probably lead to a number of people putting their 3E editions on the market and upping supply while demand is simultaneously chipped away at by the 5E and Cypher versions coming.

GlassJaw said:
Wow you're right! I totally forgot about that.

I do recall there was some kind of special release. I know it was limited.

It was a pre-order +some extra printed. Understandable given it was over $100, so was breaking new RPG ground at the time, so there was a lot of uncertainty about how well it would sell.

If you've been on the fence about backing the Ptolus Kickstarter, FYI we ran some financial numbers and decided to add stretch goals to more backer levels. Charles explains the details in this update: Update 6: Grip of the Ebon Hand Unlocked! And Exciting Backer Level News! · Ptolus: Monte Cook's City by the Spire

Whizbang Dustyboots said:
The big vinyl map is part of the higher tiers and people are lobbying for it to be made an add on.
Click to expand...

MNblockhead said:
I've been cutting back on Kickstarter and RPG materials in general, but I've long been interested in this book. For someone who has already sunk a lot of money into FGG's various Lost Lands materials, I'm not sure I have a need or use for another massive city setting. For fans of Ptolus, what do you think sets it apart? Even if I don't rune games in it, is it a fun read?
Click to expand...

You could run 5 or so campaigns from 1st to 20 and not use the same material twice. Maybe more. It has so much room to run almost anything.

Yes. If nothing else it is a great read

We're in the last 2.5 hours of the Kickstarter campaign and we've unlocked some cool stuff (including a new adventure by Bruce Cordell and a new adventure by me). Definitely worth checking out, even if you just feel like backing for a dollar so you can decide later in BackerKit if you want it!

Carmen Sbordone said:
Yes. If nothing else it is a great read
Click to expand...


We're going to deliver the 2100 pages of existing content within a few weeks--so if you're housebound and looking for a great read, it's a fantastic deal. That includes the original 3e version, so you can really explore the setting and start planning your campaign!

Hi guys, this is just to let you know that the Ptolus campaign is coming to an end and I encourage you to check it out with all the stretch goals. They are putting the 5e adventures in print and the book is going to be amazing on top of all the bonus stuff from 3e

CharlesRyan said:
We're going to deliver the 2100 pages of existing content within a few weeks--so if you're housebound and looking for a great read, it's a fantastic deal. That includes the original 3e version, so you can really explore the setting and start planning your campaign!
Click to expand...

I own everything from the 3.5 release, including a pod of delvers guide that was released later on.

Take him up on the offer folks....worth it

Excitingly the PDFs are available to backers, and shipping is starting. I've downloaded and I'm starting to read, don't expect a report for a while, it's a 674 page monster! I'm lucky enough to have an original, one of my favourite settings, and I'm excited to see what's new in the the 5e version well over a decade on

My first impression of the pdf is that beside a very slight change to layout, it seems like the same book with the same text and same art.

I'm sure there are differences, but they are hard to spot.

Making it all hyper-linked is a big step up for me. I had gotten used to just using the search function, but in a book this size, that still meant going past a lot of references to get to what I want.

The 5E Ptolus races aren't subraces, not even the elves. Everyone has stats that, if not identical to the Tasha's method, are very similar. Playable lizardfolk are new, I think, as are centaurs. Each is different than the WotC version. The litorians are kind of ... basic, although keen scent is a solid ability. I'll probably use them as the default cat people race in my campaign, and just have Rakasta be a tribe of them. (If WotC can make 99% of the bird people one will encounter in a game be aaracokra, I can make most cat people be litorians.)

I'd have to compare my PDFs side by side (I told my 3E Ptolus book to Noble Knight a few months ago), but it looks like we've got some new spells.

Lots of new domains. The technology domain in particular looks great, although I had to laugh about the note about cannons -- someone tried to abuse the domain abilities during playtesting, I suspect.

Not sure I agree with the Inverted Pyramid membership giving out abilities instead of being a subclass, but that probably reflects that PC wizards will likely enter the class later on, and that warlocks and sorcerers might sneak in there, too.

I do like that warlocks were integrated in the setting, as they fit in well.

I disagree with the idea that there are no dragonborn on Praemal, especially since I've always read Ptolus as lying far to the east of the Lands of the Diamond Throne, which certainly can have them. (Once you start looking, there's a ton of things in the Ptolus book that match up with the lore of Arcana Unearthed, especially stuff about giants.)

Eminence_Grise said:
My first impression of the pdf is that beside a very slight change to layout, it seems like the same book with the same text and same art.

I'm sure there are differences, but they are hard to spot.
Click to expand...


We pulled the layout text from the 3e version of the book, stripped it down to plain text, re-styled all of it, made all of the running text system-neutral, moved rules-specific stuff to the callouts (the margin notes), had the text edited again, and then it was all laid out from scratch. You probably won't see significant changes in the first chapters (frex, the player's guide, world, and history chapters) because they were mostly system-neutral already; the later chapters (particularly magic, chaositech, and monsters) have a LOTTTT of updates compared to the original version.

It was not our intent to rewrite the book except as needed to make it work with 5e and the Cypher System. So you won't see changes to locations and events in Oldtown, but you will see that NPCs have their stats updated to the new systems.

There look to be a few other changes to the text, although I don't know how many there are. I don't remember the reference to non-binary dwarves on page 49, for instance.

@seankreynolds, since you're here: We get a note that says that mountain and hill dwarves don't exist in Praemal, but then we aren't told what to use for Grailwarden and Stonelost dwarves that I can see. In my own campaign, I've just mapped them to mountain and hill dwarves already, but is that's what's intended? Ditto what stats to use for shoal elves: Are they PHB wood elves? High elves? Do players get to choose? (I am in the "choose" camp as a DM.)

It's a weird quirk of how the game has changed a bit since 3e.

* Or dark elf, but those are pushed into the NPC-only category unless the GM allows them as PCs, with all the caveats at the top of 5e Ptolus page 60.

I did like the note about "evil" races. Timely update.

Downloaded my PDFs, but haven’t read much besides a quick look through. Shipping costs seemed reasonable too, which was nice.

Olaf the Stout said:
Downloaded my PDFs, but haven’t read much besides a quick look through. Shipping costs seemed reasonable too, which was nice.
Click to expand...

Whizbang Dustyboots said:
I disagree with the idea that there are no dragonborn on Praemal, especially since I've always read Ptolus as lying far to the east of the Lands of the Diamond Throne, which certainly can have them. (Once you start looking, there's a ton of things in the Ptolus book that match up with the lore of Arcana Unearthed, especially stuff about giants.)
Click to expand...

Well those are "dracha" and "mojh" for starters. I seem to recall that dracha also have wings that can be used for gliding (and later flying). So apart from both being "dragon humanoids," they seem different enough from dragonborn. And if dragonborn are in the far east on the giants' continent on Praemal, then wouldn't that also be as much of a breach of the ancient pact with the giants as the giants in the lands of the Diamond Throne?

Olaf the Stout said:
Downloaded my PDFs
Click to expand...

How did you get a pdf? Did you back the KS? I ordered $149 print version at the beginning of Feb from Monte Cooks website. I just realized I either didn't buy the pdf (unlikely) or just wasnt offered, ICR. I just checked my account on the website and theres no options to DL the pdf.