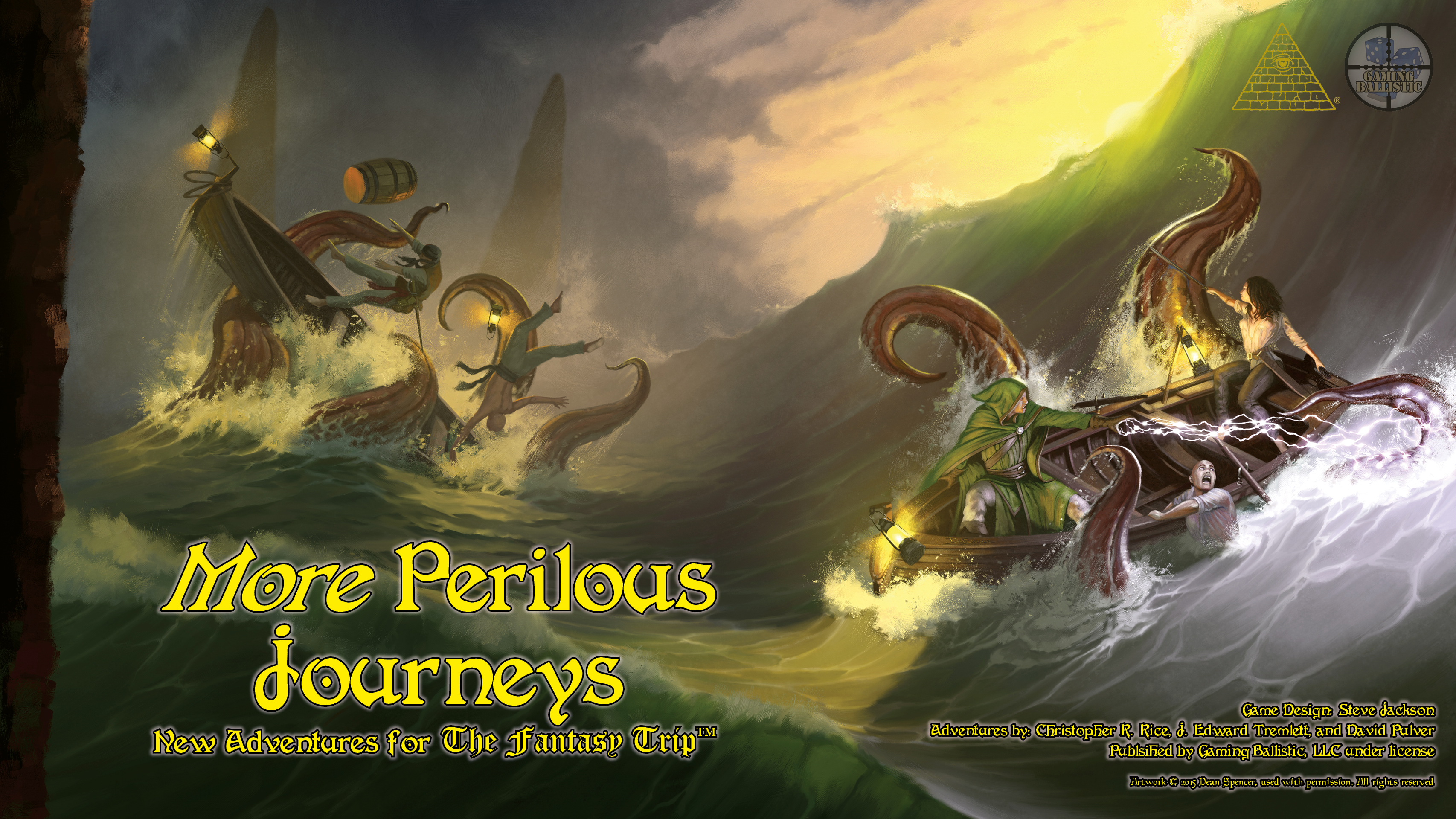 The campaign ends in seven days, on June 13, at 10pm Central Time.

The campaign funds publication of five new adventures for The Fantasy Trip. See your players battle dragons, fight to stop an evil overlord, and discover wonders and horrors as a shadowy patron leads you in pursuit of powerful magical artifacts. These exciting adventures are already written: The funds pay for editing, layout, art, maps, and a high-quality print run.

Each softcover adventure will sport a unique color cover, and contain black and white interiors on high-quality paper. The binding will be saddle-stitched (stapled).

There are three GM'd adventures designed to be played with a referee and a group of your friends. Two are programmed adventures (solos) that can be played with a small group with GM support . . . or played by yourself on the off chance you're asked to spend months alone with little social contact.

The Fantasy Trip is an “old school” RPG created by Steve Jackson. Its first element was released in 1977: the combat game Melee (available FREE from Steve Jackson Games!). That was followed by the magic game Wizard and a full roleplaying rulebook: In the Labyrinth.

The Fantasy Trip is more “cinematic” than “simulationist” — speed and ease of play are the goal, not an exact representation of every swing and every defense. The background is unabashedly swords and sorcery. Elves are noble, dragons are greedy, and gunpowder weapons exist but are very likely to blow up in your face!

TFT was off the market for more than 35 years, until 2017 when Steve Jackson regained the rights to his work and set about creating a new edition. The Legacy Edition came out in 2018 . . . and More Perilous Journeys supports that amazing deluxe edition.

The campaign features five new adventures. Three expect you to run with a GM at the helm; the other two are solo adventures.

Roc of Sages (Christopher R. Rice and J. Edward Tremlett). Beset by Collectors - assassins from the Indhyna League - the party must journey to the Isle of Greater Zosi to collect items for the semi-corporeal Jok Sevantes. Of course, there are several dangerous stops along the way. Roc of Sages is designed for 4-6 characters of 34-36 points.

Catacombs of Living Death (Christopher R. Rice and J. Edward Tremlett). Following the events of Roc of Sages, Jok Sevantes again calls the party to aid him. They must venture forth through a plague-stricken land, and enter the Catacombs of Eulogia to recover the Helm of Baat. Simple enough . . . but things are not always as they appear. Catacombs of Living Death is designed for 4-6 characters of 36-38 points.

The Sunken Library (Christopher R. Rice and J. Edward Tremlett). Set immediately following Catacombs, the players flee the plague-ridden landscape beset by numerous foes. Sevantes' plans reach their climax as his partners must bring all of the previously found artifacts beneath the depths of a lake in Meloria. There, a lost tome sits in the sunken Great Library of Meloria, and matters become treacherously clear. The Sunken Library is designed for 4-6 characters of 36-38 points.

Dragon Hunt! (David Pulver). Baron Gwalathar's armies marched off to war. Without its defenders, the dragons of the wild sensed weakness, ravaging the realm. The young Baroness Tanith Gwalathar calls for heroes: It’s time for a dragon hunt! This is a solo/programmed adventure for one 37-39 point character or two 35-36 point characters. It can optionally also be run with a GM.

Dark Lord's Doom (David Pulver). Another Dark Lord is on the march, threatening to bring death and destruction to all who oppose, and maybe a few who don't. This solo/programmed adventure features a squad of soldiers fighting in an all-out war to defeat the evil Lord Saethor and his allies before it's too late. Will the Dark Lord's doom fall upon the party, or on the villain himself? Dark Lord's Doom is designed for 4 characters of 33-36 points each.


Help push the campaign over the edge: More Perilous Journeys, now on Kickstarter.​

Some samples. Some from this campaign, some from "Five Perilous Journeys," the successful precursor campaign to this one.

This is the finished cover to the 40-page solo/programmed adventure, "Dragon Hunt!" by David Pulver. You can also see a WIP for the cover for Dark Lord's Doom in Update #9 on the KS page. 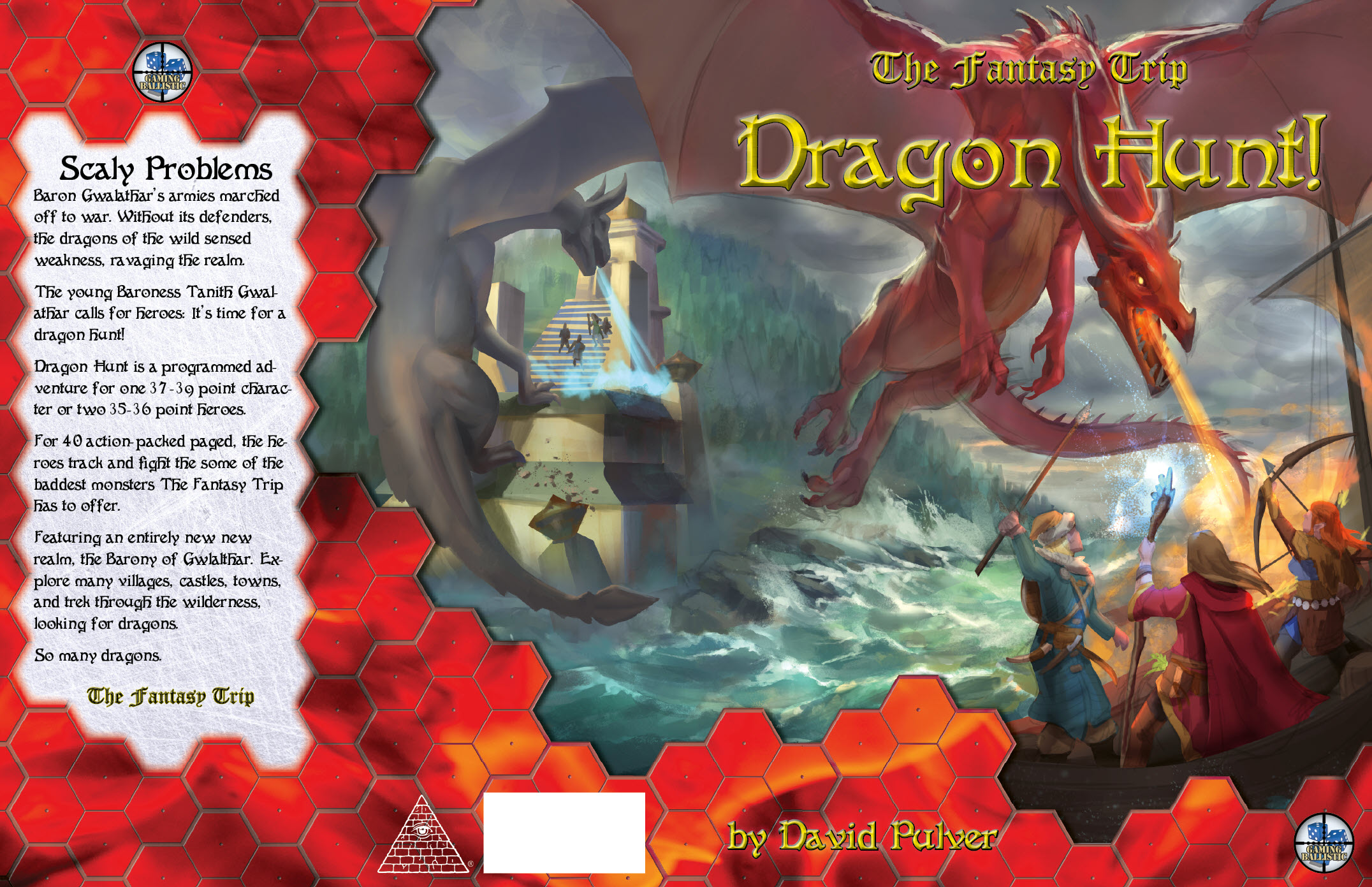 And a sample of the current WIP for the interior layout. Characters are provides so you can get right to playing . . . or you can make your own. 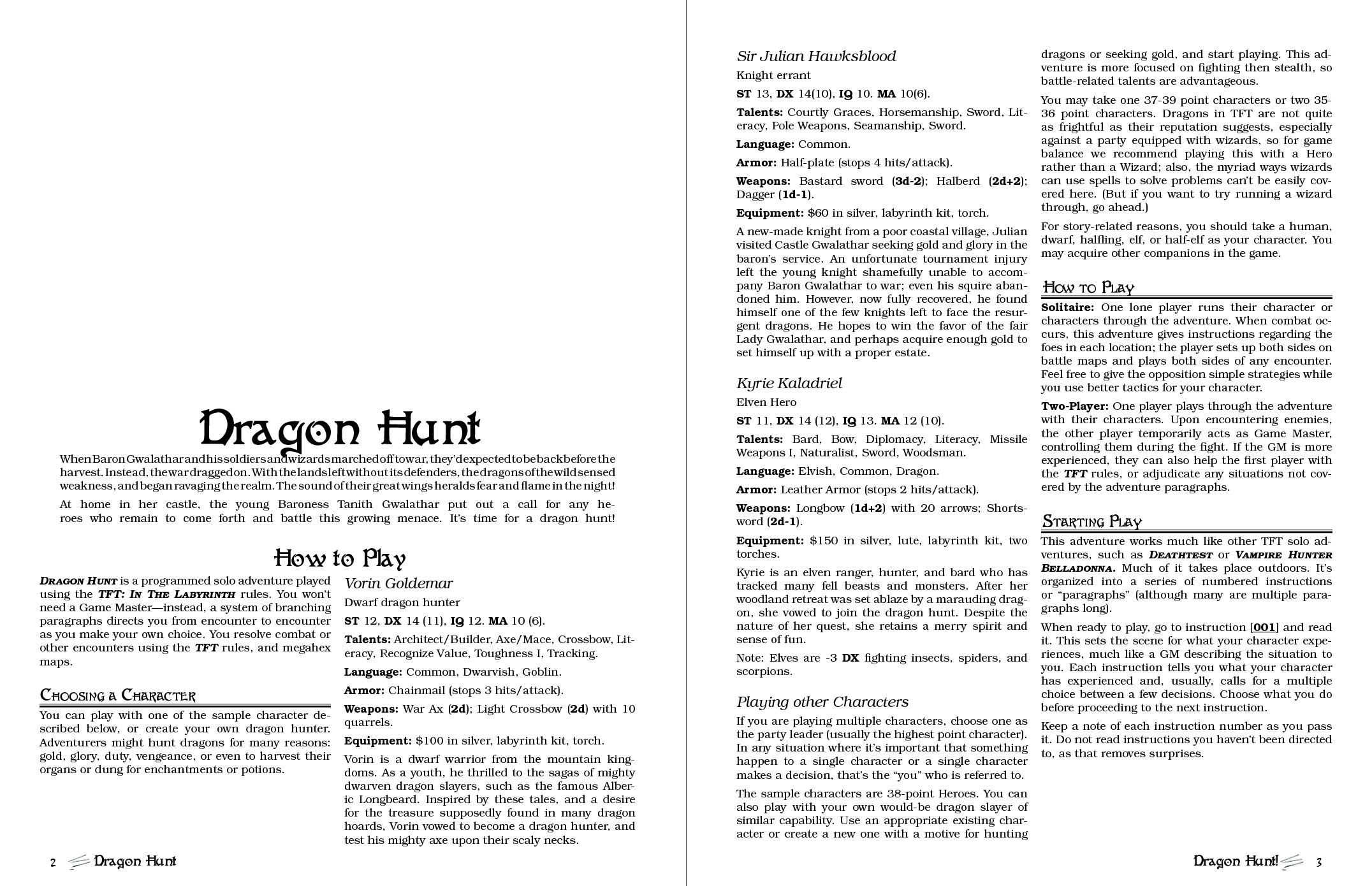 Again, preliminary WIP for the layout of one of the GM'd adventures, Roc of Sages. The map is just a place-holder. ENnie-Award winning cartographer Glynn Seal has agreed to do the maps for the final versions! 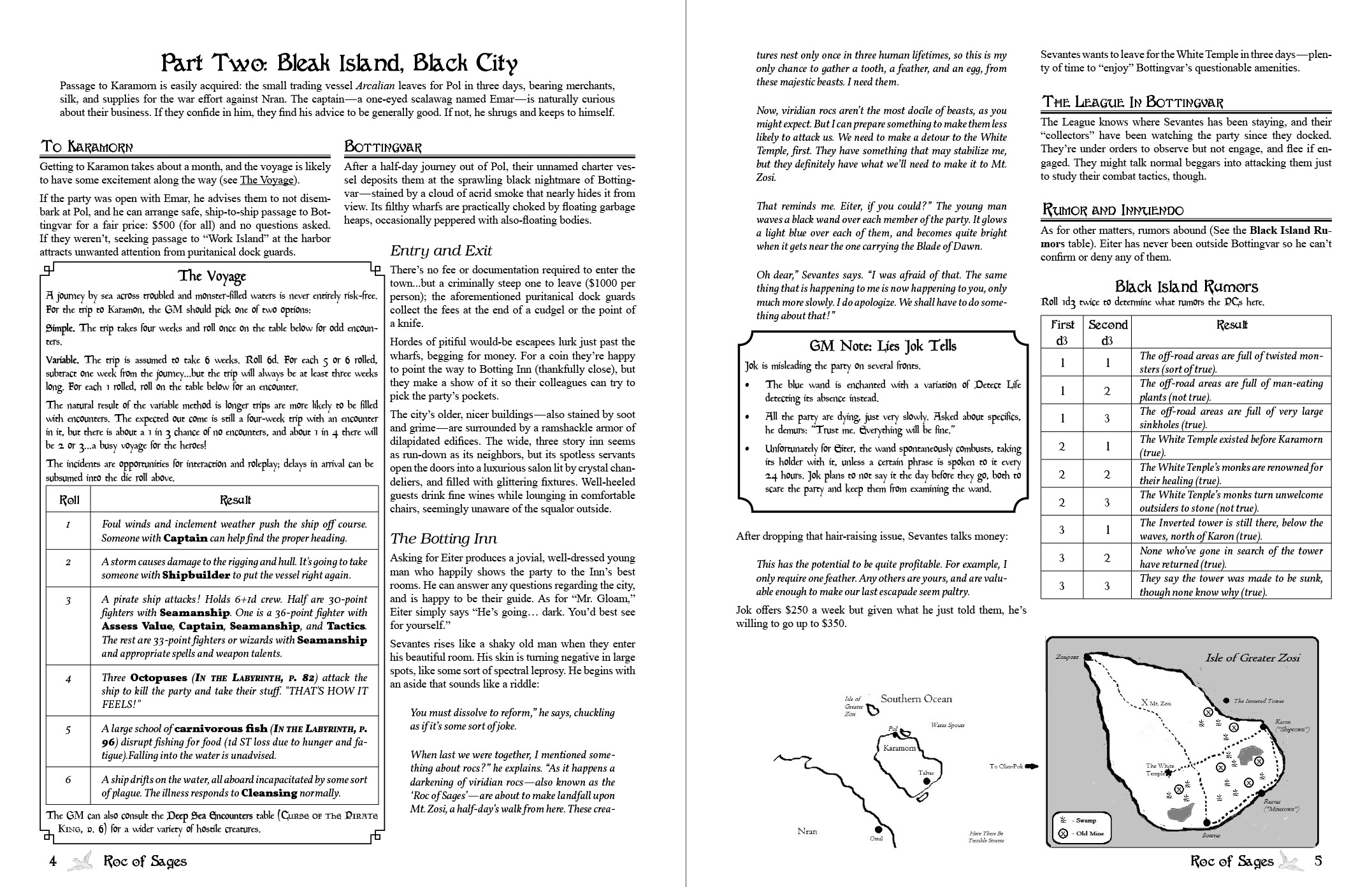 When finished, with art, they'll look more like this screenshot taken from Citadel of Ice, from the prior campaign. 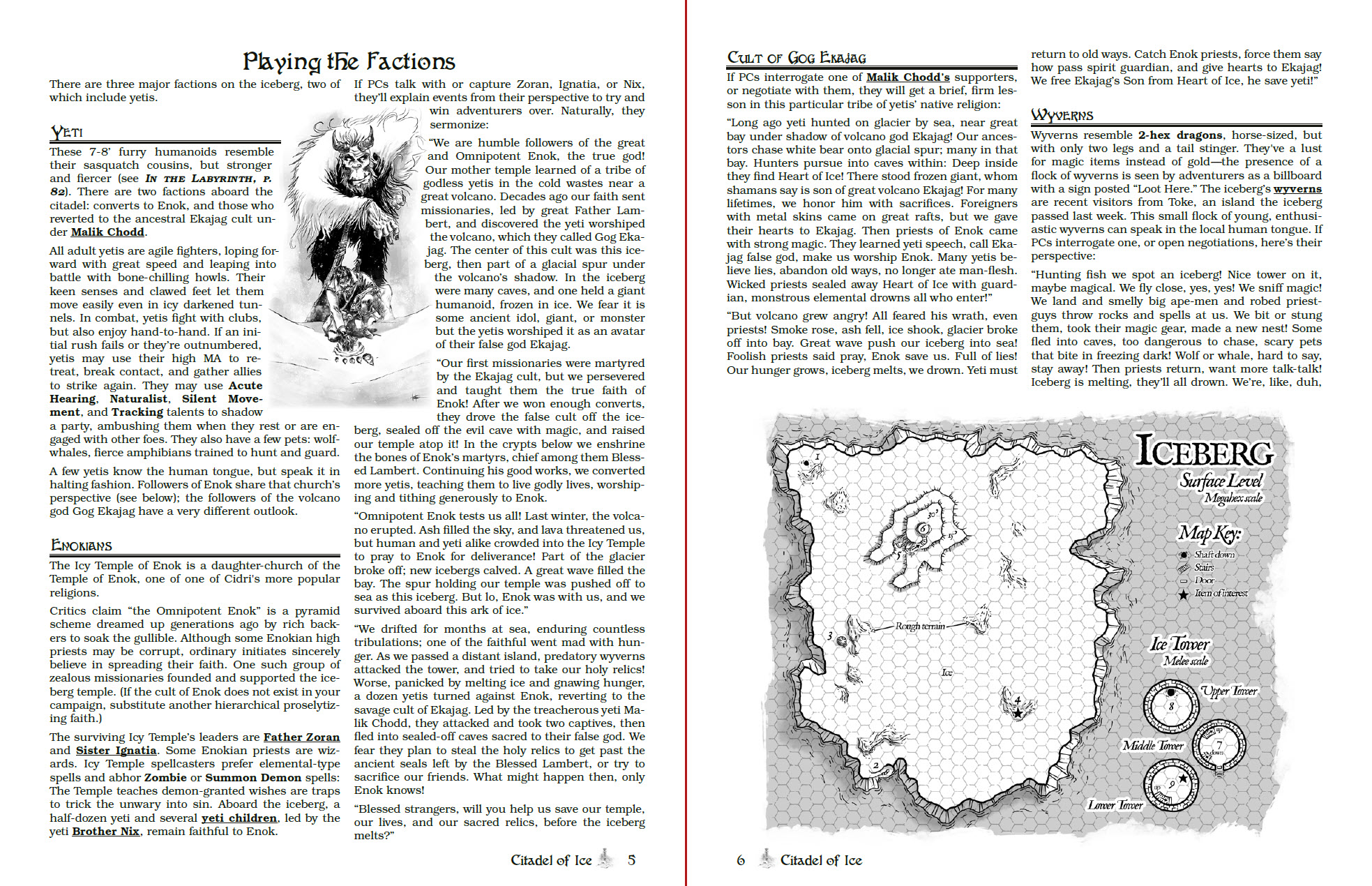 The final products are made with 80# paper with strong, thick covers (cat not included in any pledge level). 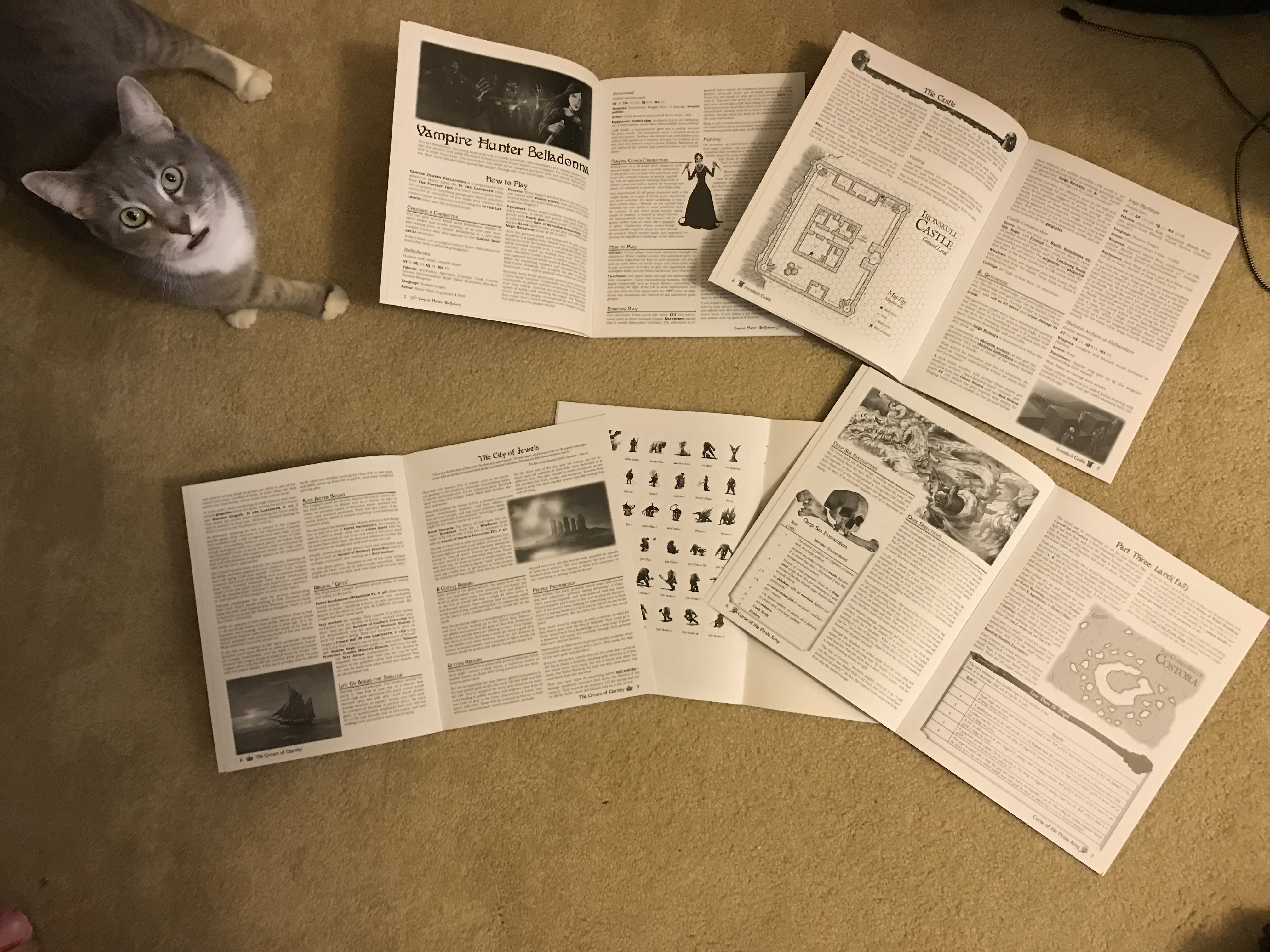 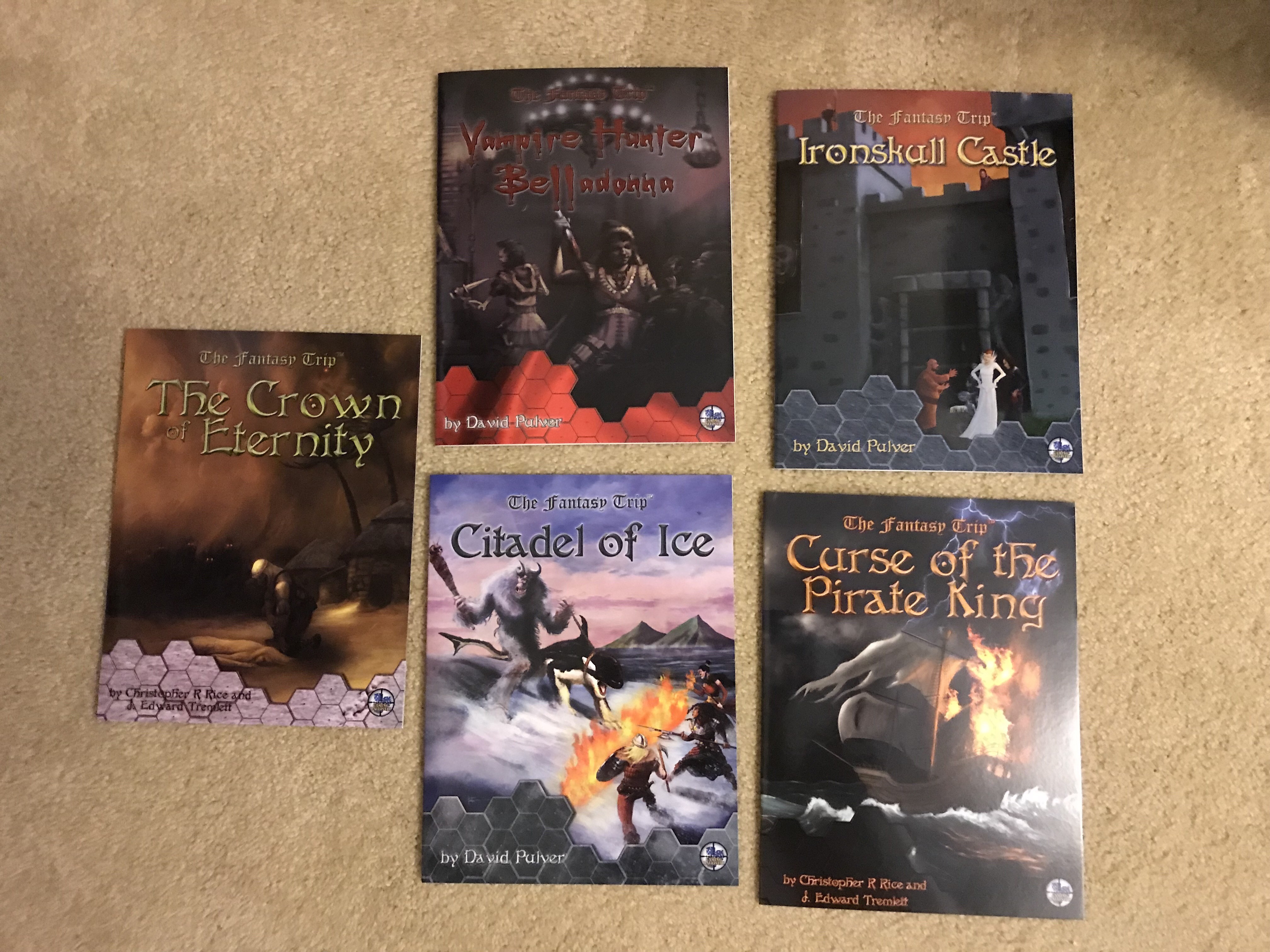 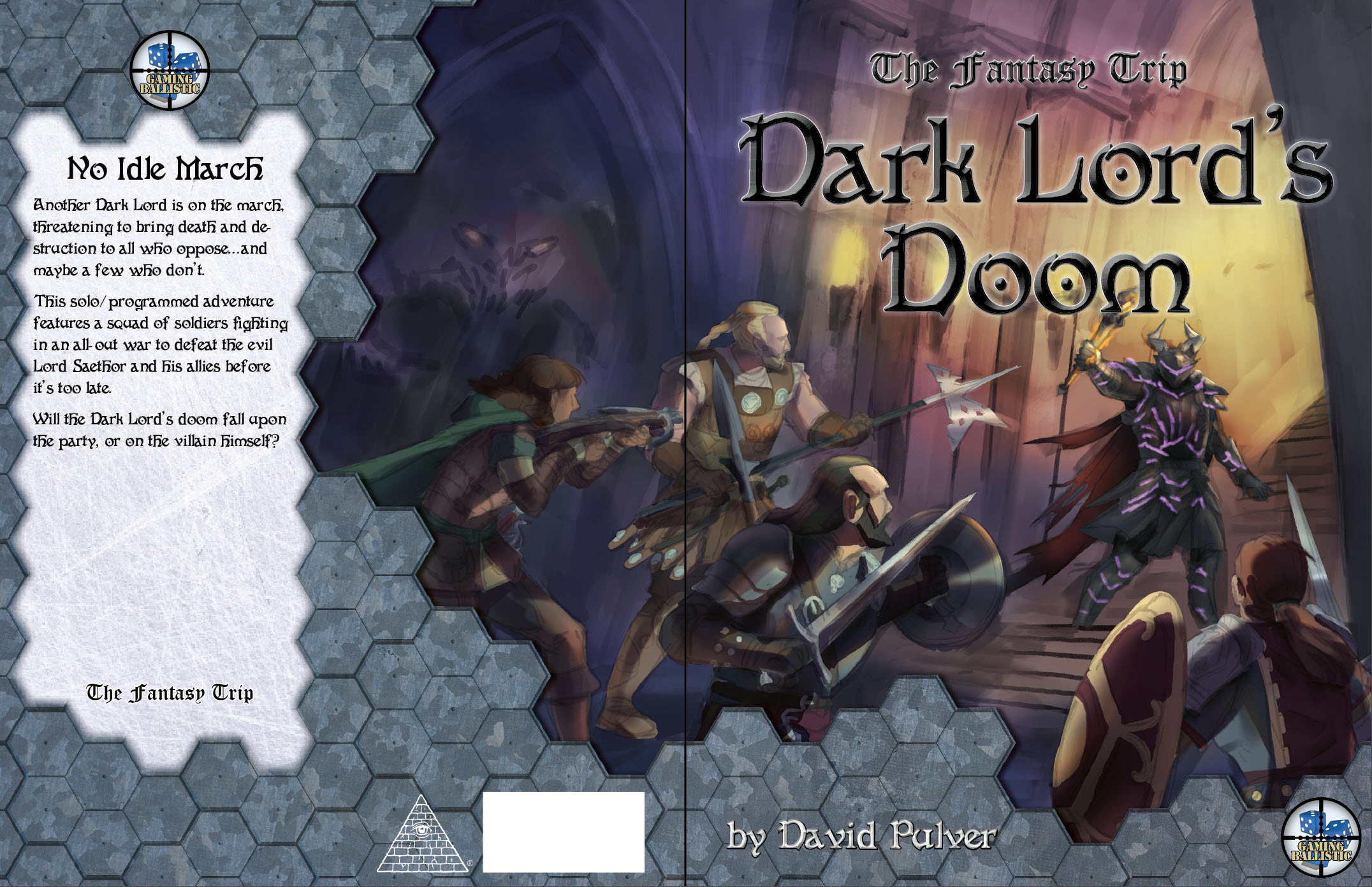 More cover progress by the wonderful Ksenia Kozhevnikova! Dark Lord's Doom follows a small squad of four adventurers through a wartime campaign against the titular Dark Lord. The cover is a WIP, with first coloration and still more details and tweaks to go. The back cover text will be punched up as well, of course...all in good time!

The campaign funded on June 7! Now is a perfect time to jump on board. Solo/programmed adventures are a great way to teach yourself game mechanics, or pass the time in the event a global pandemic forces you inside for weeks on end.

I bought the big boxed set for The Fantasy Trip. I don't know what it is about it, but I cannot wrap my head around the rules. I don't know if it's the old style presentation, the focus on minutiae, or maybe a mental block when I read about Christianity being the default religion in the fantasy setting because "it's just the true religion" and I just shut down.
But I certainly didn't get from it what I wanted (a fast-paced, rules lite, old school game).

Two and a half hours to go until the end of the More Perilous Journeys campaign.

Four raises for the authors so far. Hopefully more to go. 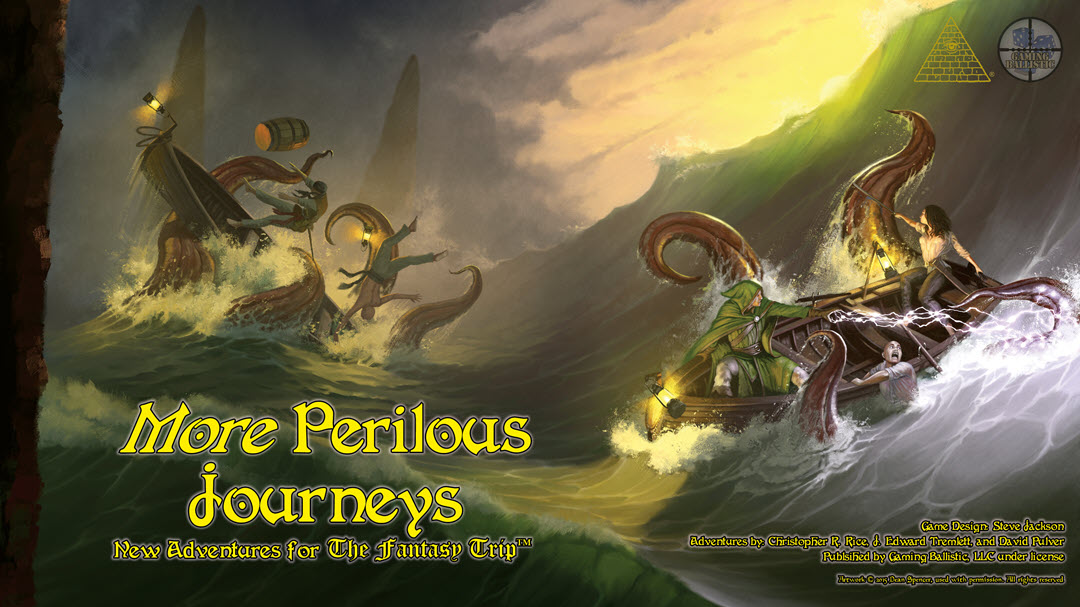