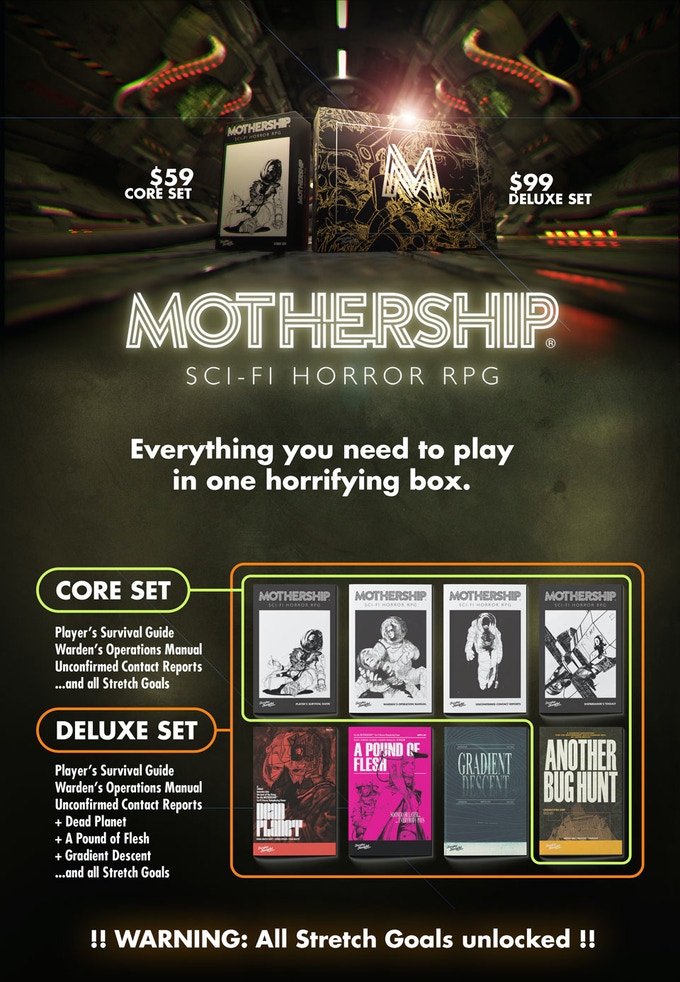 ​
EGG EMBRY (EGG): What is the pitch for Mothership Sci-Fi Horror RPG 1st Edition Boxed Set?
ALAN GERDING (ALAN): Mothership is the award-winning sci-fi horror roleplaying game. Mothership’s biggest claim to fame is its elegance and ease of use. Instead of pages and pages of instructions and rules, anyone can learn how to play quickly. So if you’re looking for some terror-filled space adventures with death looming around every corner, there’s no better system than Mothership.

EGG: Call of Cthulhu, Delta Green, RuneQuest, and more use a d100 system, as does your RPG. Can you talk a bit about Mothership’s version of the d100 system?
ALAN: The d100 system has always been my personal favorite, and it’s a perfect fit for Mothership. Mothership is all about ease-of-use mechanics, and nothing really portrays that better than the d100. If someone asks, “What is the likelihood I’ll succeed in this skill check?” there is no fancy math involved. If you have a 45% in Strength, for instance, you have a 45% chance of succeeding. Some players swear by the d20 system. The twenty-sider is iconic. It is instantly recognizable as the geometric symbol of role-playing games. The good news is Mothership also uses a d20. Yes, Mothership is a d100 system, but it’s also fueled by our Panic System. As characters get more stressed, they will eventually be forced to do a “panic check.” When rolling for a panic check, players role the d20. If you fail to roll above your stress level, you panic!

EGG: Would you say that the game draws inspiration from the best of dark sci-fi?
ALAN: Absolutely! Right on our Kickstarter page we include a BINGO card full of inspirations for Mothership. I’ve included the image for you here. 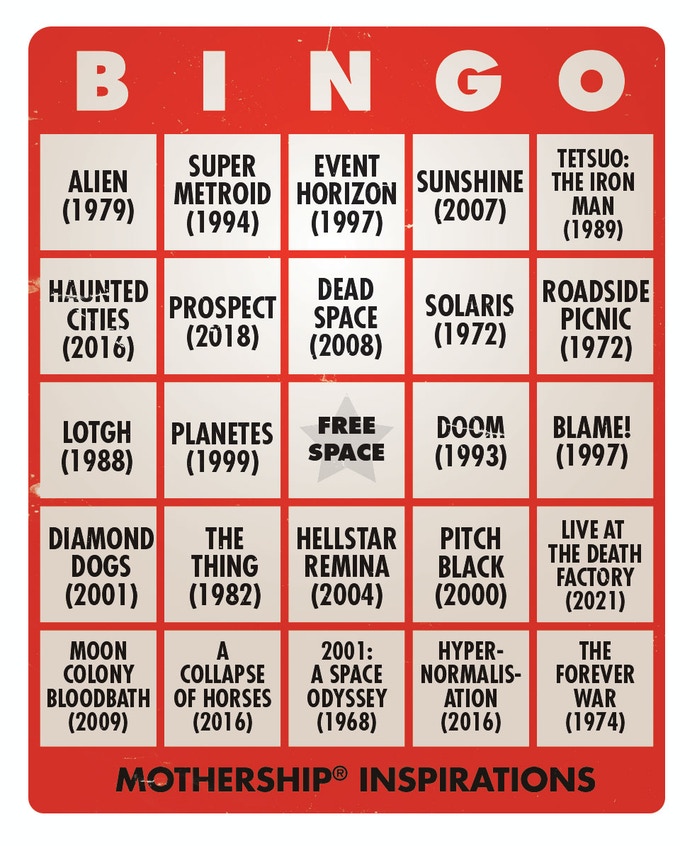 EGG: This campaign reprints some material and offers new options. For the Player’s Survival Guide, what new options can gamers expect?
ALAN: This is a great question. Our original printing of the Mothership Player Survival Guide was really an early access experiment. Honestly, it was printed and sold on a whim. There was almost no playtesting done in advance of its sale. This is why we had no idea if Mothership would be a hit or not. But it was! Since we quickly learned there was a fanbase for Mothership, we began working on the reprint. This is why we call the original printing “zero edition” and the current printing “first edition.” The current edition is the culmination of countless hours of playtesting and the help of players across the globe. First edition is the game we know will make current fans happy while also capturing the hearts of new fans. Are there differences between first edition and zero edition? Absolutely. What are those differences? To thoroughly answer this question, Sean McCoy (the creator) and I posted videos on our Tuesday Knight Games YouTube channel to really go into detail. But the quick answer is, we just polished some of the rougher aspects of the game system. Zero edition has many edge cases with some rather wonky rules. Now the game is more streamlined making it truly more elegant and accessible than it already was. We took what people love about Mothership and enhanced those aspects while cutting out the unnecessary clunk. 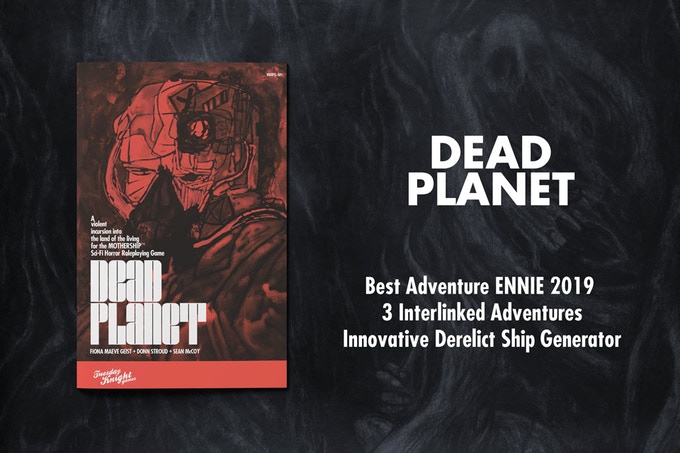 EGG: You have two popular backer levels for the Kickstarter, the Core Set and the Deluxe set. What’s the difference between the two?
ALAN: Both the Core Set and the Deluxe Set come with everything you and your friends need to enjoy the quick narrative-rich game of Mothership. The difference between the two are you get a lot of bonus content in the Deluxe Set. The Deluxe Set comes in a bigger, fancier box and a bigger, fancier Warden Screen (the GM screen to hide all of the game master’s books and notes from the players at the table). But, to me, the biggest reason to back the Deluxe Set is to also get our previous three adventure kits: Dead Planet, A Pound of Flesh, and Gradient Descent. These three kits give players and wardens specific adventures while also providing tables and tools to create your own future adventures. Moreover, these 3 adventure kits have been updated to the first edition rules set. The big question we get a lot is, “If I already own Dead Planet, A Pound of Flesh, and Gradient Descent, is it worth it to back the Deluxe Set?” Honestly, probably not. We will always be providing a free digital “conversion kit” for our Mothership fans. This little conversion kit will tell you every exact change from the original zero edition adventures to their updated first edition counterparts. This way, if you already own the original adventures, you really don’t have to own the updated versions.

EGG: In this campaign, you’ve offered a number of stretch goals. Which ones are you most excited to create?
ALAN: This is a tough question. This is especially tough knowing that all stretch goals come in every pledge level, Core Set and beyond. So all stretch goals are fair game. Certainly, one of the best parts of running this Kickstarter campaign is reading backers comments on which stretch goal they like the most. The most obvious answer is probably the character standies stretch goal. These punchout standies really scratch that retro indie feel while still being aesthetically gorgeous. However, I think the starter adventure “Another Bug Hunt” will be the most memorable stretch goal. While all our other adventures can be played from the get-go, “Another Bug Hunt” is being specifically designed to usher in new players to acclimate to everything the Mothership system has to offer. 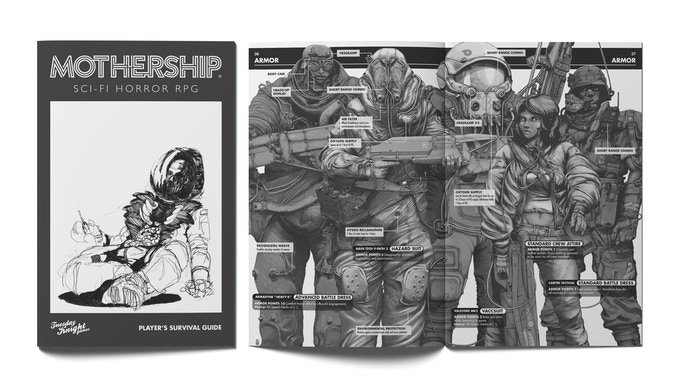 EGG: Indulge me while I go over the Mothership RPG timeline:
In August, 2019, Tuesday Knight Games took home two ENnie Awards:
In November, 2019 you kickstarted GRADIENT DESCENT: Module for Mothership Sci-Fi Horror RPG reaching 2,169 backers who pledged $63,801. In August, 2020, more awards:
It’s November, 2021 and you’re looking at a million dollar RPG Kickstarter for the Mothership Boxed Set. From a free PDF in 2018 to a million dollar crowdfunding in 2021, that’s an impressive path. When you first created Mothership, did you have any notion that it would be this popular?
ALAN: As I mentioned before, this game really was a leap of faith. We had absolutely no idea it would be this popular. Zero edition was first sold at the Origins Game Fair in Columbus, Ohio in 2018. We printed a few hundred copies and sold them at our booth along side our other (non-RPG) games. Two Rooms and a Boom, That’s Not Lemonade, and World Championship have always sold well at conventions. But we were very surprised when we sold out of all of our Mothership copies. The biggest question we got from those early adopters was, “Do you have an adventure to go along with it?” We really hadn’t even thought that far in advance. So, in just two months, with the help of some very talented people, printed Dead Planet and more copies of Mothership to sell at Gen Con in Indianapolis. Before we knew it, we were winning ENnie awards.

EGG: How did you feel when you found out that you’d won your first two ENnies for Mothership?
ALAN: I simply can’t convey into words what that moment felt like. Without exaggeration, it is one of the fondest memories I will ever have. To say I cried is a huge understatement. I was an emotional mess of tears and joy. I actually tried to film the moment on my phone, but I was so manic the footage is virtually unusable. You just hear me screaming and sobbing, and all you can see is some idiot (me) running like I was in a very bad romantic version of Cloverfield. Sean worked so hard on breathing life into Mothership. Winning an ENnie is such a validation of his hard work and creativity. And while his name is front and center on the Mothership Player Survivor Guide, he really reminds everyone he couldn’t have done it without the help and support of others. Fiona Geist, Jerratt Crader, and Donn Stroud, to name a few, really taught us that it takes a motley village to make something like Mothership succeed. 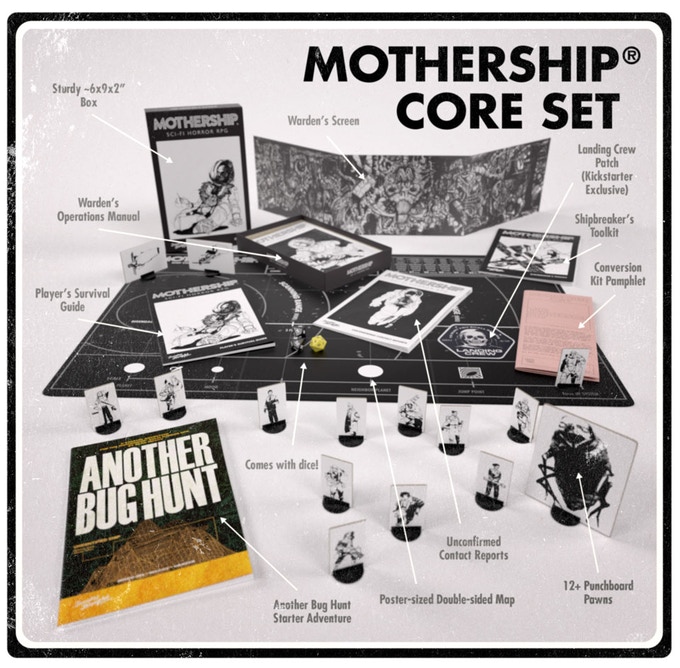 EGG: Beyond this campaign, what else are you working on?
ALAN: Wow. It’s almost hard to think of beyond this campaign. We just really want to poor all the love and tears we can into making Mothership the best it can possibly be. It’s our sincere hope that Mothership will last longer than any of us, entertaining future generations with horrific sci-fi character deaths for decades to come. Obviously, you can expect more Mothership support and content. We have a great third party license program, which many have already taken advantage of. So if you’re reading this and you have a great idea for a Mothership adventure, took kit, or anything else sci-fi horror RPG related, you should let us know. You could be the next big project Mothership related.

EGG: Thanks for talking with me. Where can fans follow you online?
ALAN: You can find our Kickstarter with survivesolvesave.com. Please follow us on social media and Kickstarter. And you can always buy all of our games at [our webstore].

Amazing. I think I have to try it.

darjr said:
Amazing. I think I have to try it.
Click to expand...

It's a fun game and easy to get into.

Anthology of Mothership modules, resources, etc. just hit Kickstarter. Mentioning because it feels primed to build on the boxed set's success, and also because it's a new approach for third-party Mothership--instead of doing a slew of separate zines and pamphlets, the creators are pouring that sort of material into a single hardcover book (with optional hooks that allow GMs to tie it together into a single campaign). 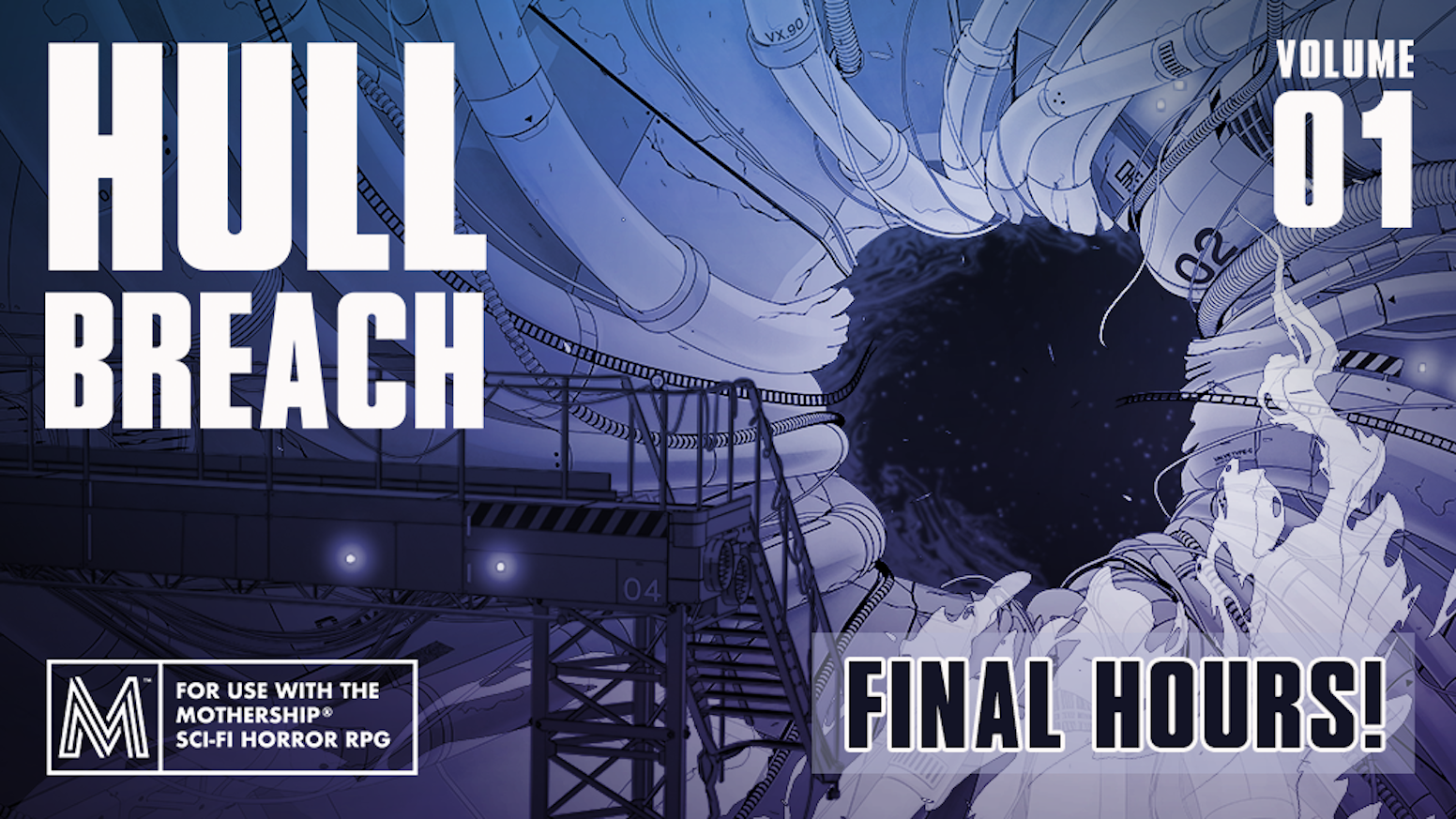 A sci-fi horror anthology digest for the Mothership RPG. A manifest of new, eclectic terrors from 20 independent authors.