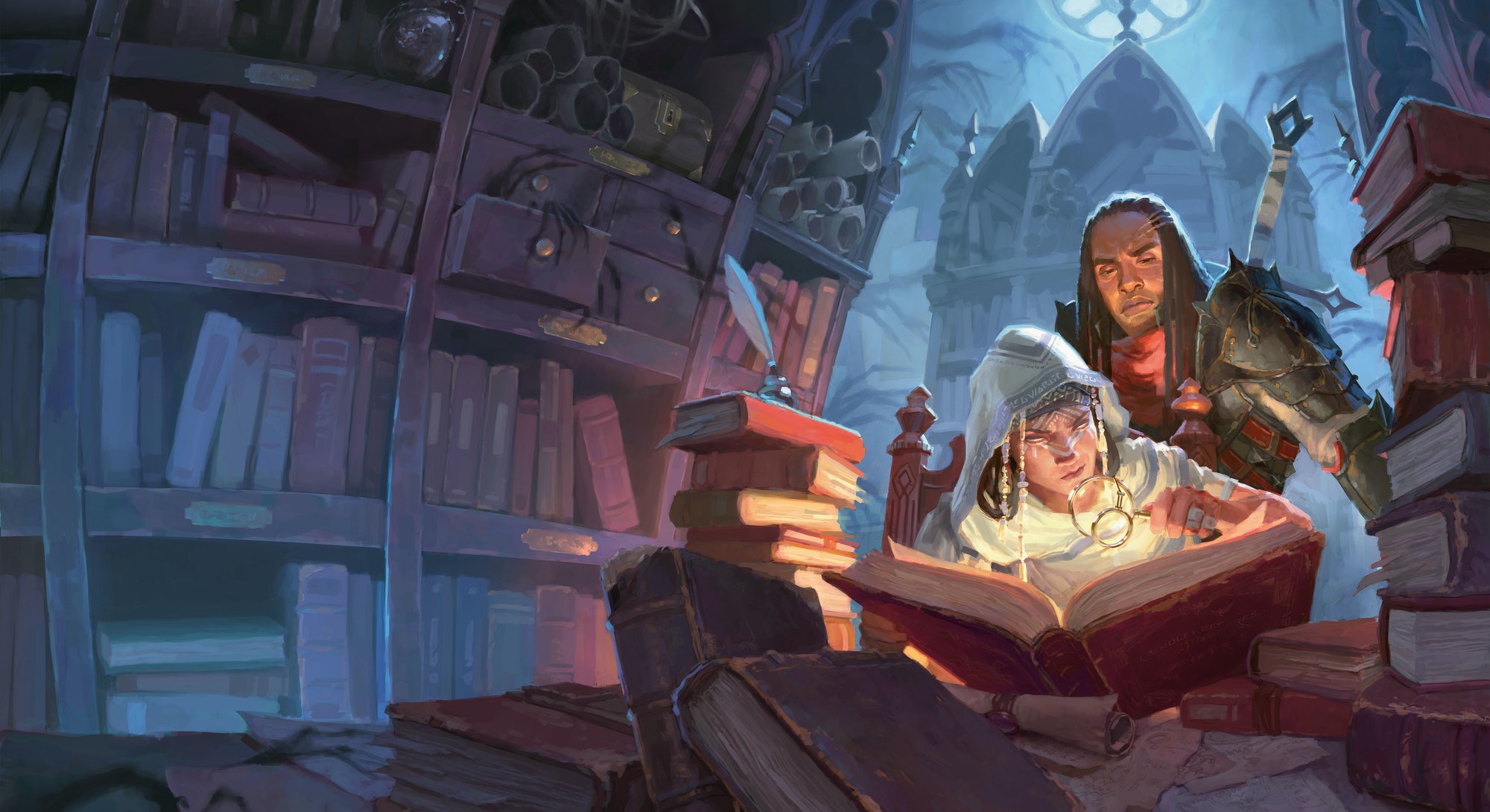 Candlekeep Mysteries comes out on March 18th, featuring 17 different short adventures based out of the library fortress of Candlekeep. I received an advance copy for review and my main takeaway from reading the adventures are how many of them have a focus on exploration that doesn’t necessarily have to end in a big boss battle. The mysteries contained within are broadly defined, often meaning an interesting hook beyond the usual quest giver pointing the heroes at a bad guy. Here are my favorite adventures in the book along with why I like them. I try to be as spoiler-free as possible but I will discuss plot points, so if you want to stay completely clean, this is your final warning to turn around. 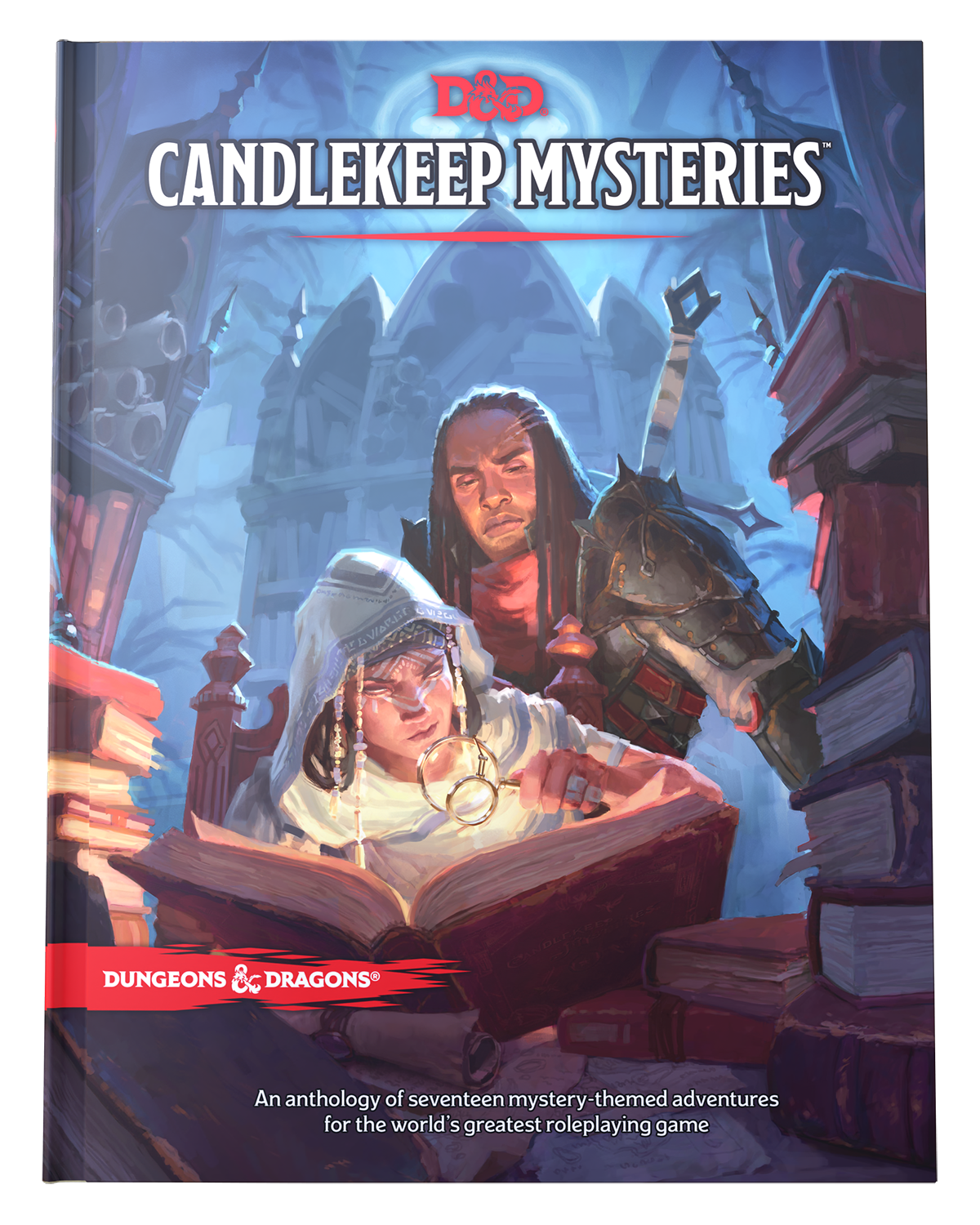 The Joy of Extradimensional Spaces by Michael Polkinghorn​

The anthology starts off strong with the players accidentally getting sucked into an artifact that’s a permanent Mordenkainen’s magnificent mansion spell. They have to explore the space to assemble the magic word that will return them home. Not only does this play out as an excellent adventure to introduce new players to the puzzle-solving and exploration element of Dungeons & Dragons, it also has relatively few monsters which make it easily adaptable beyond its first level setup.

The book opens with a very strong one-two punch as this 2nd-level adventure starts with an attack by book-like mimic creatures in the shelves of the great library. Turns out someone has been replacing rare volumes with these creatures so they can sell those books on the black market. It’s up to the players to track down the thieves. What really impressed me about this adventure was the emphasis put on negotiating with the thieves for the return of the rare books instead of assuming the players will kick down the door and kill everyone.

A Deep And Creeping Darkness by Sarah Madsen​

Not all horror adventures have to be connected to Ravenloft and this one offers a story that leads to an abandoned mining town and a hive of horrific monsters nesting in the mine. There’s a great bit of Aliens atmosphere to this one. Thanks to its 4th level setting, players might be feeling a little overconfident having just gotten some of their cool 3rd level toys, just like the Colonial Marines. This adventure reintroduces meenlocks to Fifth Edition. I can imagine the looks on players' faces when they realize that the horrible creatures they’ve been slaying might just have been townsfolk turned by these vicious creatures.

Not every adventure has to be grim and serious. This adventure featuring a gnome’s madcap plan to magically launch one Candlekeep’s towers into space has the manic energy of a Warner Brothers cartoon. It’s an excellent 9th-level selection to slip in between more serious moments of a campaign, with the kind of big-eyed antagonist that players will love to hate to love.

The Book of Inner Alchemy by Daniel Kwan​

Many of the stories in the book whisk players away to an alternate dimension or demiplane. This 12th-level adventure adds a wuxia story to the mix complete with an arrogant master, a temple of fighting monks and a secret technique book that hides an even bigger magical secret. The evil master boss fight has flavorful legendary actions that should make adventures feel like they are suddenly in a classic Shaw Brothers martial arts film. The adventure also concludes with some great discussion of where to go - including possibly continuing the bad guy’s quest on their own time.

The Canoptic Being by Jennifer Kretchmer​

I was initially drawn in by the Egyptian theme of fighting a mummy lord and the hook. The players' names are written in the titular book to draw them into the mystery. The hook is well deployed as the villain purposefully wrote about the heroes because they saw a future where their fates connected. By doing so, they draw the players into the villain’s home turf where they will attempt to change their fate. At 13th-level, this is a great adventure for Dungeon Masters to use the villain to spout prophecies and doom that can lead up to an epic ending as the players see glimpses of the future for good and bad.
Last edited by a moderator: Mar 12, 2021
Click to expand...

Would the authors reviewing the books PRE release update their review after they played each Adventure. AKA Post play review.

Those sound quite interesting! Also, I just wanted to say that technically meenlocks were introduced to 5th edition in Volo's Guide to Monsters.

Does the Book of Inner Alchemy take adventurers to Kara-Tur?

Sounds like an impressive assortment of stories to run sessions at various player levels. From the descriptions above, I am particularly interested in "A Deep and Creeping Darkness". It has elements have been toying with in my mind to take my players on another adventure down the road.

Dragonhelm said:
Does the Book of Inner Alchemy take adventurers to Kara-Tur?
Click to expand...

Not according to the adventure’s author:

“I asked the editor to remove any mentions of Kara-Tur from my adventure simply because of the baggage there. But some of the characters are Shou, which is a compromise I’m willing to make to put it into the D&D world.”
Click to expand...

In The Joy of Extradimensional Spaces when you say that it is a permanent Mordenkainen’s magnificent mansion spell, does that mean that 5e finally has a Permanence spell? Is it introduced in this book? Thx!

Hutchimus Prime said:
Not according to the adventure’s author:
Click to expand...

Thanks for the link. That was a good article and great art.

I do hope they develop Kara-Tur someday. Hopefully they'll do it in the right way and it'll be awesome.

thawizkid said:
In The Joy of Extradimensional Spaces when you say that it is a permanent Mordenkainen’s magnificent mansion spell, does that mean that 5e finally has a Permanence spell? Is it introduced in this book? Thx!
Click to expand...

Pretty sure the answer is no. Plot device only.

Dragonhelm said:
Thanks for the link. That was a good article and great art.

I do hope they develop Kara-Tur someday. Hopefully they'll do it in the right way and it'll be awesome.


If they do, I hope Daniel Kwan is the one to do it, and give an actually good fantasy pseudo-Asia.

thawizkid said:
In The Joy of Extradimensional Spaces when you say that it is a permanent Mordenkainen’s magnificent mansion spell, does that mean that 5e finally has a Permanence spell? Is it introduced in this book? Thx!
Click to expand...

Could be a fairy godmother type of mansion that vanishes after midnights.

imagineGod said:
Could be a fairy godmother type of mansion that vanishes after midnights.
Click to expand...

No, it's permanent, but the adventure stresses that it's a unique casting of the spell by the original owner...

B
Journeys Through the Radiant Citadel Review Round-Up: What The Critics Said