Break out the bugle and battle standard because today in Mythological Figures we’re going a century and a half back to post-Civil War America, exploring the history of an incredibly brave woman named Cathay Williams. 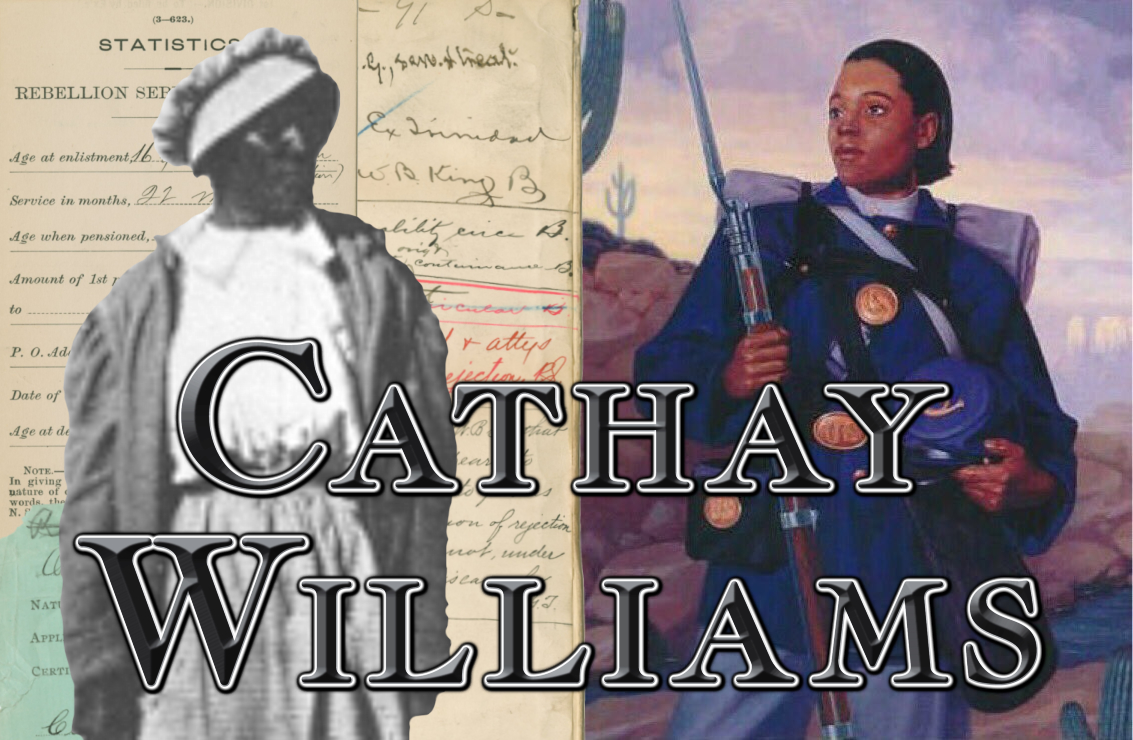 In September of 1844 Cathay was born in, of all places, a town called Independence in the state of Missouri—and as the daughter of a free man and an enslaved woman she was born into slavery. Her early years were spent working in the house of the Johnson plantation near Jefferson City until the Union army occupied that in 1861, taking all the slaves as ‘contraband’ made to work as cooks, do laundry, or care for the wounded. There’s some rumors that she was present at battles of the Civil War (the Battle of Pea Ridge, the Red River Campaign, the Siege of Vicksburg, Sherman’s March to the Sea) but there’s no direct evidence for it (‘Finis Cathay’ did enlist in the 32nd Missouri Infantry in 1862; nobody knows if that was really her).

Enlisting under the false name of ‘William Cathay’ on November 15, 1866 in St. Louis, Missouri, Cathay joined the 38th United States Infantry Regiment under a male guise known only to a cousin and a friend that were also in the regiment. After a bout with smallpox that put her in the hospital she bounced back to a posting in New Mexico, but she couldn’t stay on her feet and ultimately was discovered by the unit’s surgeon who told the post commander about her being a woman and, two years later on October 14th 1868, she was discharged by Captain Charles E. Clarke. Following that she cooked for the army at Fort Union before moving to Pueblo, Colorado where she married a thieving husband, had him arrested, then moved to Trinidad, Colorado to become a seamstress. Word had gotten around about her time in the service however, and in 1876 a reporter out of St. Louis published an article about her life and experience in the military.

By the 1890s Cathay’s health was in decline and she applied for disability pension per her military service—like several women granted pensions for serving in the American Revolutionary War. A doctor from the U.S. Pension Bureau examined her in 1893 and despite having no toes left, suffering from neuralgia, and only able to walk with a crutch she was denied any disability payments. Not long afterward she perished, buried in an unknown resting place.

Normally I am pretty ashamed of being American but Cathay Williams makes me feel that maybe I shouldn’t be. This woman was born into slavery and—despite that and the sexist policy that women couldn’t serve in the military—worked her way into the army. In the past half decade a couple monuments to her have gone up (a bronze bust and rose garden outside the Richard Allen Cultural Center in Leavenworth, Kansas, and a bench on the Walk of Honor at the National Infantry Museum) though how much of a direct impact she had isn’t known. Frankly I don’t think its lack diminishes her life at all: she was a sly badass birthed in the face of some of the world’s most evil practices and rose above it. We can only hope more monuments to her are on the way.


Design Notes: While Cathay’s life itself certainly doesn’t seem to have lacked excitement, to keep her engaging as an NPC I’ve leaned into the idea that she did participate in some Civil War battles under the name of Finis Cathay. To that end she’s got some rogue (with the trick-people Mastermind archetype suited for deceiving the US Army) and a bit of fighter (Champion seems apropos). Obviously impersonating a fake person (or more than one persona) for so long makes the Charlatan background and Actor feat natural choices. Let’s do the numbers! The DMG cruised in at 3.125 and the Blog of Holding smack dab at 3, making me confident with that CR.

Background - Charlatan: Fake Papers. Cathay has the papers, clothing, and contacts required to justify an entirely different identity. When Cathay has access to an official document or example of a creature’s handwriting, she can make forgeries of similar papers (whether personal or official).

Action Surge (1/Short Rest). On her turn, Cathay can take an additional action on top of her regular action and a possible bonus action.

Cunning Action (1/Turn). Cathay can use a bonus action to take the Dash, Disengage, Help, or Hide action.

Fast Learner. After Cathay has heard a creature speak for 1 minute or longer, she can mimic its manner of speaking as long as she knows the same language as the creature (allowing her to seem like she is local to a given region).

Feat: Acting. Cathay has advantage on Charisma (Deception) and Charisma (Performance) checks made to impersonate. In addition, she can mimic the speech of other creatures she’s heard speak for at least 1 minute. A suspicious listener can see through her mimicry by succeeding on a Wisdom (Insight) check opposed by Cathay’s Charisma (Deception) check.

Improved Critical. Cathay’s weapon attacks score a critical hit on a roll of 19 or 20.

Second Wind (1/Short Rest). On her turn, Cathay can use a bonus action to regain 1d10+3 hit points.

Tactician. Cathay is able to use the Help action to aid an ally attacking a creature as long as the target of the attack is able to see and hear Cathay and is within 30 feet of her.


REACTIONS
Uncanny Dodge. When an attacker Cathay can see hits her with an attack, she can use her reaction to halve the attack’s damage against her.
Click to expand...

You should never be ashamed to be an American. I served our country like her and am proud of my service. I always tell people to go visit some of the other countries I have been to and then decide how proud you are to be born here.

For the stat block- is a hunting riffle a finesse weapon and can you use sneak attack with it. Thanks.

Agreed - the most recent generation has downplayed US History; zeroing in on the negative, ignoring the positive. There are many currently-unsung heroes and role models waiting only for us to dig a little deeper, rediscover their names, and tell each other again of their deeds.

Thank you for finding and illuminating Cathay.

aco175 said:
You should never be ashamed to be an American. I served our country like her and am proud of my service. I always tell people to go visit some of the other countries I have been to and then decide how proud you are to be born here.

For the stat block- is a hunting riffle a finesse weapon and can you use sneak attack with it. Thanks.
Click to expand...


Thank you for your service.

I very much doubt most people are ashamed to be American when comparing our country to 2nd and 3rd world countries. Comparing to other 1st world countries, though, that is up for debate. A debate we won’t have here of course.

aco175 said:
For the stat block- is a hunting riffle a finesse weapon and can you use sneak attack with it. Thanks.
Click to expand...

The hunting rifle (from the DMG) is not a finesse weapon, but it is a ranged weapon so you can indeed sneak attack with it.