Mythological Figures is headed back to Carthage today for the city-state’s founder and first queen: Dido! 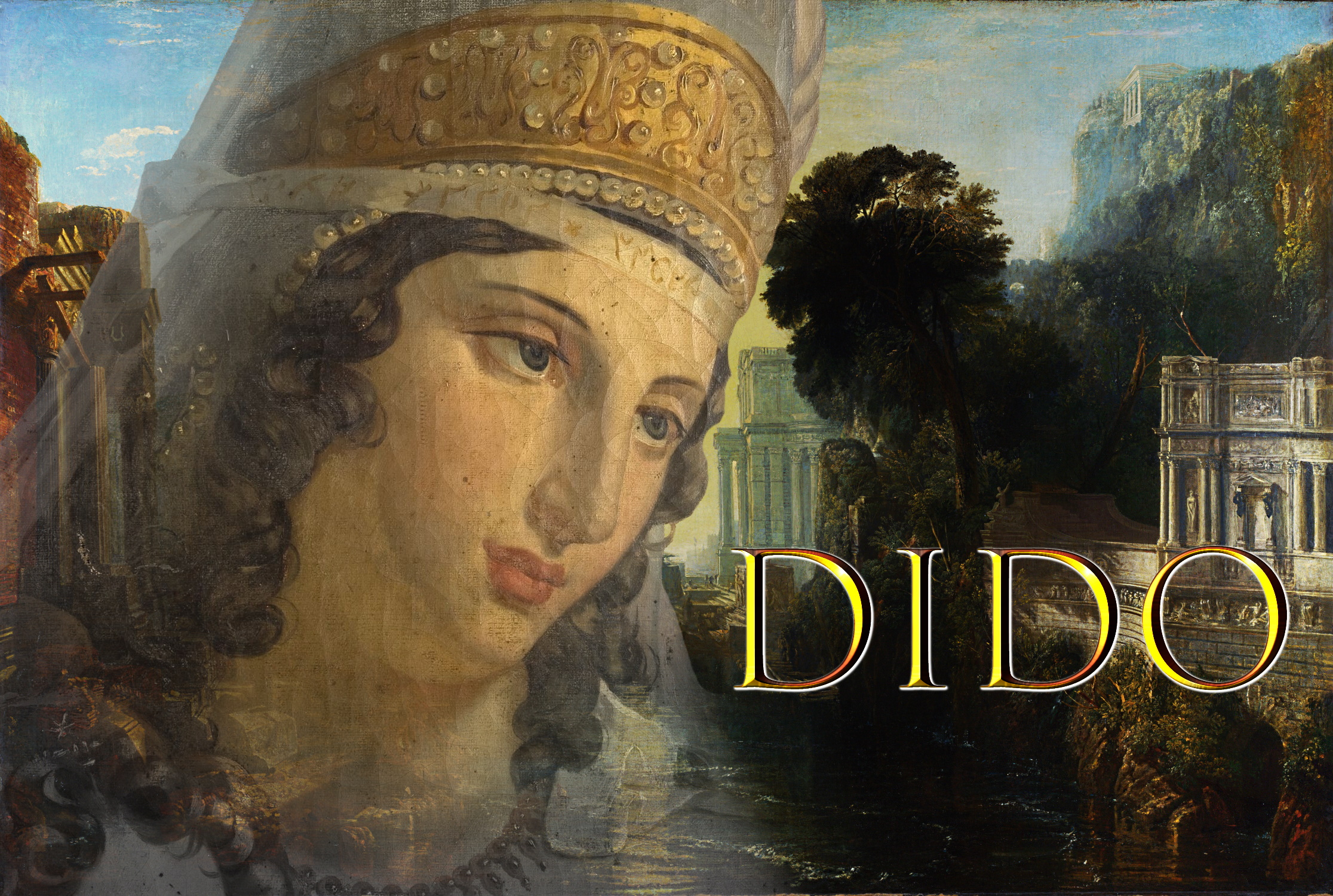 Dido (also known as Elissa, born in 839 BC; pronounced “DY-doh”, chalking up yet another tally in Mike’s Wife’s Mike-Mispronouncing-Things game) was the first queen and the founder of the city-state of Carthage in ancient Phoenicia. She was a clever, enterprising, wise, great leader who is still popular to this day in both Lebanon (where Tyre once was) and Tunisia (where Carthage once was), though she’s no longer on the latter’s currency. It should be noted that there’s a lot of uncertainty with the names around Dido and many of the details—we are talking about something like three millennia ago.

With the death of Tyre’s king (Mattan I or Belus depending on your source) in 832 BC the rule of his city-state was handed down to his two children—Pygmalion and Dido—though only the boy was given power. Unsurprisingly this ten year old boy became a tyrant and Dido fled after learning he was behind the assassination of her uncle-husband Acerbas (a priest of Heracles who maybe was also called Sicharbas or Sychaeus), the second in line to the throne and a holder of much secret wealth. Dido had the servants sent to help her move into her brother’s palace instead throw this treasure into the sea and then join her in flight from her sure to be enraged brother, though they had no idea what they really tossed to the waves were bags of sand. On the coast of northern Africa the Berber king Iarbas allowed Dido a small amount of land to take as temporary refuge, but only as much as an oxhide could encircle—so she cleverly cut one into very thin strips, enough to take an entire hill as her own. In modern calculus problems her cleverness lives on in the “isoperimetric problem”, frequently called the “Dido Problem”. At this future site of Carthage as foundations were dug they found two prophetic items: an ox head and a horse head respectively indicating great wealth and power in war in the settlement’s future.

All of this is according to Gnaeus Pompeius Trogus, recorded in his Philippic histories in the third century AD by Junianus Justinus. He claims that after Carthage began and did well Iarbas declared he would make war if Dido did not become his wife. Her reply was to create a funeral pyre to Acerbas upon which she then unexpectedly ascended, killing herself with a sword to be returned to him.

In Virgil’s Aeneid the flight of Dido from the city-state of Tyre was spurred on by a dream sent by her husband, and afterward she falls in love with the Trojan hero Aeneas. This is what enrages King Iarbas who beseeches his father (Zeus/Jupiter because you know the king of the Olympian pantheon has a bajillion mortal kids) and gets Mercury to lure Dido’s new love off to the riches of Italian lands. When Aeneas and his fleet depart she throws herself on a pyre made from his belongings, sparking a hatred between Carthage and Troy.

Design Notes: Though clearly quite astute and a wordsmith of sorts, Dido wasn’t known for her fighting skills so we’re looking at a skill-savvy rogue. It’s not totally clear when she actually died (at first it looked like she was quite old but after finishing up research that wasn’t concrete) but it definitely seems like it was by her own hand, which sounds about right for someone maneuvering around royal politics starting at the ripe age of 8. So a rogue mastermind of low level—we’ll go with 6th to snag that extra Expertise. Let’s do the numbers! With her lack of armor it shouldn’t be a surprise that she comes in at CR 1 whether looking at the DMG or the Blog of Holding, though if you’re looking for a more interesting noble to fill in as an NPC she’s definitely well-suited to the task.

Background: Noble. Due to her position as a ruler, Dido is treated with a measure of respect wherever she goes. She is treated as royalty (or as closely as possible) by most peasants and traders, and as an equal when meeting other authority figures (who make time in their schedule to see her if requested to do so).

Cunning Action (1/Turn). Dido can use a bonus action to take the Dash, Disengage, Help, or Hide action.

Fast Learner. After Dido has heard a creature speak for 1 minute or longer, she can mimic its manner of speaking as long as she knows the same language as the creature (allowing her to seem like she is local to a given region).

Feat: Diplomatic. Dido can make a Charisma (Persuasion) check contested by the Wisdom (Insight) check of a creature that can understand what she says during 1 minute of talking. On a success, as long as Dido remains within 60 feet of it (and for 1 minute afterward) the target is charmed by her. Dido automatically fails on the check if she or her companions are fighting the target.

Tactician. Dido is able to use the Help action to aid an ally attacking a creature as long as the target of the attack is able to see and hear Dido and is within 30 feet of her.


REACTIONS
Uncanny Dodge. When an attacker Dido can see hits her with an attack, she can use her reaction to halve the attack’s damage against her.
Click to expand...

Unfortunate suicide ending but it is cool to have a legendary female founder who had her iconic cleverness continue on as a math challenge.

So your first instinct was "Did-oh"?

Voadam said:
So your first instinct was "Did-oh"?
Click to expand...

I always thought it was Dee-doh.

For this NPC, replacing Sneak Attack with different ability and replacing the available actions via Cunning Action would seem appropriate.

Stormonu said:
I always thought it was Dee-doh.
Click to expand...

... I dimly remember my CompLit professor pronouncing it that way, so it seems even professionals can get it wrong.

Has Jezebel been given the MikeMyler treatment?
I find it intriguing that Jezebel was Didos aunt (or something),

and I just thought Dy-doh was the natural way to pronounce it, seems I was wrong

Tonguez said:
Has Jezebel been given the MikeMyler treatment?
I find it intriguing that Jezebel was Didos aunt (or something),

and I just thought Dy-doh was the natural way to pronounce it, seems I was wrong

The great aunt of Dido. I'll add her to the queue.