Shouldn't that actually be the 7th printing? The last round of errata was for the 6th printing.

Also, there's even errata for Out of the Abyss, Sword Coast's Adventurer's Guide, and Volo's Guide to Monsters!

EDIT: I see that the D&D Conversions document has been updated to v1.01, but I can't actually see anything different at a glance.
Last edited by a moderator: Aug 31, 2017
Click to expand...

A treasure trove of new Dungeons & Dragons errata and Sage Advice was released today, and it includes changes from the 6th [update -7th!] printing of the Player's Handbook that address some of the slipperiest wording in the rules. 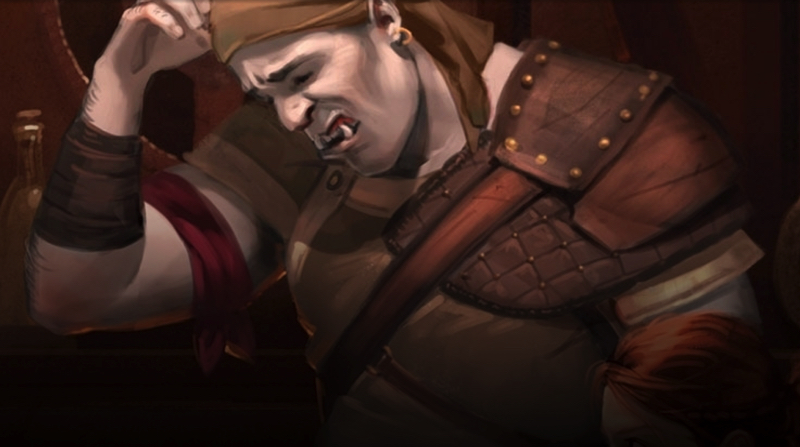 For example, previously, the rules never specified any requirement for or benefit from sleep, making the elf's "Trance" feature confusing. That's fixed now:

A long rest is a period of extended downtime, at least 8 hours long, during which a character sleeps or performs light activity: reading, talking, eating, or standing watch for no more than 2 hours.

There was a lot of confusion about whether "no more than 2 hours" referred to "standing watch" or to all light activity, and whether sleeping was even required.

A long rest is a period of extended downtime, at least 8 hours long, during which a character sleeps for at least 6 hours and performs no more than 2 hours of light activity, such as reading, talking, eating, or standing watch.

Does the Trance trait allow an elf to finish a long rest in 4 hours? The intent is no. The Trance trait does let an elf meditate for 4 hours and then feel the way a human does after sleeping for 8 hours, but that isn’t intended to shorten an elf’s long rest. A long rest is a period of relaxation that is at least 8 hours long. It can contain sleep, reading, talking, eating, and other restful activity. Standing watch is even possible during it, but for no more than 2 hours; maintaining heightened vigilance any longer than that isn’t restful. In short, a long rest and sleep aren’t the same thing; you can sleep when you’re not taking a long rest, and you can take a long rest and not sleep.

Here’s what this all means for an elf. An elf can spend 4 hours in a trance during a long rest and then has 4 additional hours of light activity. While an elf’s companions are snoozing, the elf can be awake and engaged in a variety of activities, including carving a lovely trinket, composing a sonnet, reading a tome of ancient lore, attempting to remember something experienced centuries before, and keeping an eye out for danger. The Trance trait is, ultimately, meant to highlight the otherworldly character of elves, not to give them an edge in the game.

That all said, if you’re the DM and you decide to let Trance shorten an elf’s long rest, you’re not going to break the game. You are making a world-building choice if you do so. You’re deciding that elves, on a global scale, are ready to reenter a ght before anyone else, that they heal faster than most humanoids, and that they regain their magical energy faster. Such a choice would make sense in a world where elves are the dominant race, where they not only live longer than others, but also recover faster.

How does the Lucky feat interact with advantage and disadvantage? The Lucky feat lets you spend a luck point; roll an extra d20 for an attack roll, ability check, or saving throw; and then choose which d20 to use. This is true no matter how many d20s are in the mix. For example, if you have disadvantage on your attack roll, you could spend a luck point, roll a third d20, and then decide which of the three dice to use. You still have disadvantage, since the feat doesn’t say it gets rid of it, but you do get to pick the die.

How does the Lucky feat interact with advantage and disadvantage? The Lucky feat represents extraordinary luck that can help you when you need it most. It lets you spend a luck point; roll an extra d20 for an attack roll, ability check, or saving throw; and then choose which d20 to use. This is true no matter how many d20s are in the mix. For example, if you have advantage or disadvantage on your attack roll, you could spend a luck point, roll a third d20, and then decide which of the three dice to use. You still have advantage or disadvantage, since the feat doesn’t say it negates it, but you get to pick the die. The upshot of this fact is that a rogue, for instance, who has disadvantage on an attack roll couldn’t use Sneak Attack even if the rogue uses the Lucky feat to pick the die.

If a DM wants advantage and disadvantage to play their normal roles even when the Lucky feat is used, here’s a way to do so: roll two d20s for advantage/disadvantage, roll a third d20 for Lucky, eliminate one of the three dice, and then use the higher (for advantage) or lower (for disadvantage) of the two dice that remain.
SaveSave​

Fighter - Spells Known of 1st-Level and Higher (p. 75). The final sentence ends as follows: “… unless you’re replacing the spell you gained at 3rd, 8th, 14th, or 20th level from any school of magic”.

Warlock - Spell Slots (p. 107). In the example, thunderwave has been replaced by witch bolt.

Multiclassing - Spells Known and Prepared (p. 164). A new paragraph appears at the end of this subsection: “If a cantrip of yours increases in power at higher levels, the increase is based on your character level, not your level in a particular class”.

Feats - Alert (p. 165). The third benefit now reads as follows: “Other creatures don’t gain advantage on attack rolls against you as a result of being unseen by you”.

Adventuring - High Jump (p. 182). After applying your Strength modifier, a high jump is a minimum of 0 feet.

Resting (p. 186). The text clarifies that any creature, not just adventurers, can take a short or long rest.

Short Rest (p. 186). After applying your Constitution modifier to a Hit Die roll, you regain a minimum of 0 hit points.

Long Rest (p. 186). The first sentence of the rule now reads, “A long rest is a period of extended downtime, at least 8 hours long, during which a character sleeps for at least 6 hours and performs no more than 2 hours of light activity, such as reading, talking, eating, or standing watch.” In addition, you regain at least one Hit Die when you finish a long rest. (Note this change was not marked out as 6th printing.)

Prismatic Wall (p. 269). The spell no longer refers to a rod of cancellation, and the text clarifies that dispel magic works only against the violet layer.

True Resurrection (p. 284). There’s a new sentence at the end of the second paragraph: “If the creature was undead, it is restored to its non-undead form”.

Still not in love with the ruling on Lucky. I think it should parse advantage/disadvantage first, then let you use a luck point, so that you're not spending a point on what could be a crapshoot by rolling low 3 times. It might not happen often with 3d20 but it's still gonna happen, and the original ruling JC gave on this made this feat way too powerful. I see it as the only reasonable middle ground, IMO.

They goofed up. The stuff marked "6th printing" is from last time. The new stuff hasn't been labeled.

These are the only new changes:

pukunui said:
They goofed up. The stuff marked "6th printing" is from last time. The new stuff hasn't been labeled.
Click to expand...

No worries. I've let Jeremy know via Twitter. Hopefully they'll fix that up.

As an aside, I like what they did with the new Sage Advance Compendium, putting the new stuff in highlighted boxes. Makes it easier to find. Maybe they should do that with the errata as well.


Did anyone else notice there's a new Monster Lists pdf that incorporates the Volo's monsters in with the MM ones? That could be handy.

Luck's ability to turn Disadvantage into Super Advantage is ridiculous. It should simply be "reroll a die."

I wonder if Lucky and advantage/disadvantage could be done as follows?

The easiest way is just to roll your normal roll with advantage/disadvantage. Now you only have one roll. Add another with Lucky, and choose between those 2. This seems like the most obvious and simple way of doing it to me, that I'm not sure why they didn't have it work that way.

buda said:
Luck's ability to turn Disadvantage into Super Advantage is ridiculous. It should simply be "reroll a die."
Click to expand...

It makes sense thematically: succeeding by luck even where the odds are stacked against you.
In terms of power level, if its an issue at a table, then there have been some pretty good suggestions in this thread and earlier ones about watering it down to whatever level you consider appropriate..

I would like a commentary to each change, explaining what changed, why it changed, what the previous wording could lead to, and generally how the change was necessary.

A long rest is a period of extended downtime, at least 8 hours long, during which a character sleeps for at least 6 hours and performs no more than 2 hours of light activity, such as reading, talking, eating, or standing watch.
Click to expand...

So... you must sleep for six hours? Even if you're an elf that doesn't even know how to sleep? And why do I need to do it for six hours, when my Trance ability talks about four hours?!?!

And what's this with a maximum of 2 hours light activity? What if your long rest has to take 9 hours? Does this mean the human needs to go back and sleep one hour more? Does it mean the elf cannot make do with 4 hourse of trance - since out of the five extra hours, "no more than 2" of them can be spent on light activity, that presumably means three more hours of trancing?!

So my rest is done after 4 hours after all?!

Why not simply bring up trancing explicitly right there in the long rest definition:

"A long rest is a period of extended downtime, at least 8 hours long, during which a character sleeps for at least 6 hours or enters a trance for at least 4 hours, and performs no more than light activity otherwise, such as reading, talking, eating, or standing watch."

That all seems clear enough to me. Elves are an exception explained in sage advice. As usual, they describe the general rule and let specific exceptions explain themselves.

If you spent 9 hours resting, only 8 hours matters for the benefits. You can spend an hour total at the beginning and/or end doing whatever you want.

Yes. No. Maybe. Nobody knows.

The elves do, problem is you'd have to go to Iceland and look really hard to find them in order to get an answer.

CapnZapp said:
So my rest is done after 4 hours after all?!
Click to expand...


That was the previous answer in Sage Advice, but the updated answer indicates that they've changed their mind, and now elves actually finish their long rest in 4 hours instead of 8.

At least, that is how I read the updated answer. Not really a big deal - you can still only get the benefits of a Long Rest once in any 24 hour period, regardless of how long it takes you to complete the Long Rest.