Beadle & Grimm’s Pandemonium Warehouse, a company famous for their luxury D&D products, is branching out and kickstarting a set of beautiful Pathfinder 2e character journals and great looking Pathfinder swag. Beth Rimmels connected me with Paul Shapiro, Chief Finance Goblin of Beadle & Grimm’s, an RPG accessories company composed of friends including actor Matthew Lillard (Scooby Doo, Hackers, Dice, Camera, Action, Wing Commander, Scream, and more). I asked Paul if Matthew would be willing to participate in this interview, and Matthew was good enough to join in our discussion about the Kickstarter for their gorgeous Pathfinder 2e accessories. 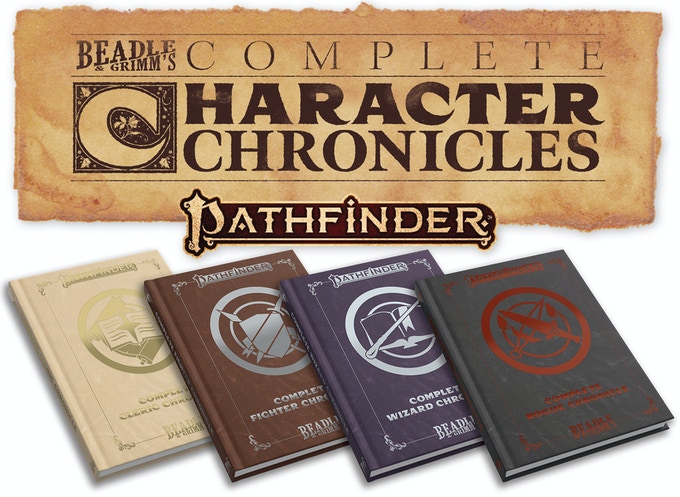 EGG EMBRY (EGG): Thank you both for discussing this Kickstarter with me. What are the Complete Character Chronicles for Pathfinder 2e?
MATTHEW LILLARD (MATTHEW): Hey, Egg. Happy to jump in here and share my POV. It’s a character sheet, rule book, and journal built for a single class and all-in-one book. Our idea was to create a single book that you could grab and play with and at the end of the adventure, it could sit on the bookshelf as a keepsake.
PAUL SHAPIRO (PAUL): Adding to that, we really believe in the idea that players are at the table to hear a story, they’re there to help write it. So we wanted the players to have a book for their characters that was as cool and exciting as all the books the GM has behind the screen – with amazing art, all the rules, and plenty of space for each player to tell their own epic story.

EGG: For your Pathfinder 2e Character Chronicles, you’re offering books specific to the core four classes complete with rules and art. Let’s discuss the Beadle & Grimm’s Complete Wizard Chronicle as an example. What can fans expect in this book?
MATTHEW: Lots of goodness. Specifically, the wizard chronicle collects all the spells for wizards, the feats, skills you need to run your class. It’ll have fun stuff, like a page for your wizard keep, pages of rules on familiars and lots of killer art. With the Wizard book, we built a solid prototype and now the remaining class chronicles have a great foundation to build on.
PAUL: We built the book from the point of view of a wizard character, so there’s plenty of space for spells and familiars and all the rules you need to play a wizard. And throughout the book we collected some of the best wizard art from across the Pathfinder universe – they gave us access to their full archives, so we had a blast finding the best images from across all their publications. We also created new art for each class that’s amazing. 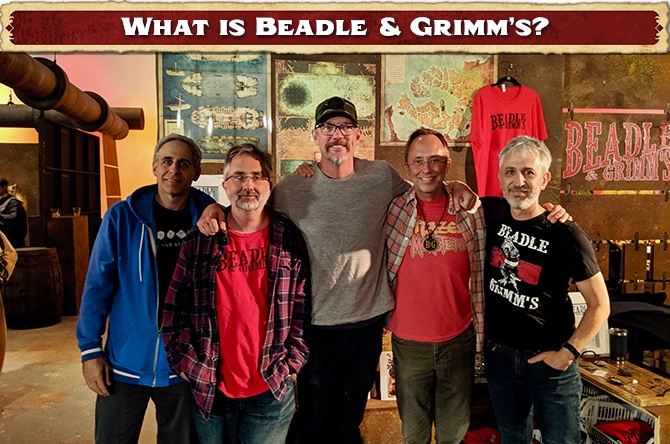 EGG: You’re offering cards, dice, and miniatures, can you share some of the specifics for those?
PAUL: As we built out our Kickstarter, we really wanted to focus on what players would want at the table, and we wanted everything we added to the Chronicles to be as class-specific and unique as the chronicle itself. So the dice are specific to each class – the Wizard set has extra D4s for all those magic missiles – and the art on the front of each dice tin is original, class-specific art that we’re really excited about.

EGG: Let’s talk about the Bag of Holding Books. What size is it and what is this made of?
PAUL: It’s big enough to hold the book, the dice, and a few snacks, and it’s made of vegan leather – which means it’s not real leather but it looks and feels like the real thing. We’re counting on people eventually getting back around the table to play and we wanted to make sure that when we do, players can bring their Character Chronicles with them to every game!

EGG: This project represents two firsts for Beadle & Grimm, I believe. Let’s start with the first first: Pathfinder 2e, why create books for Paizo’s new system?
MATTHEW: In all honesty we wanted to expand our base and grow the company. We see the obvious similarities in the communities and we felt what we were doing for D&D would translate well to the Pathfinder universe. In success, we hope to find lots of different ways to engage in the Pathfinder and Starfinder worlds.

EGG: The other first is B&G crowdfunding this project. Why go the Kickstarter route?
MATTHEW: We see Kickstarter as a great way to introduce ourselves to a new community. As a relatively new company, we know that our survival depends on expanding our brand identity and continuing to create kickass gaming products that gamers love.
PAUL: We chose Kickstarter partly because of the other first – we were introducing ourselves to entirely new community of players and we felt that the visibility of a Kickstarter would help introduce us to this new community of Pathfinder players. We also loved how Kickstarters engage with customers and encourage feedback – it’s an incredibly collaborative way to sell – and we thought that was important as way of not only reaching but hearing from the Pathfinder community. 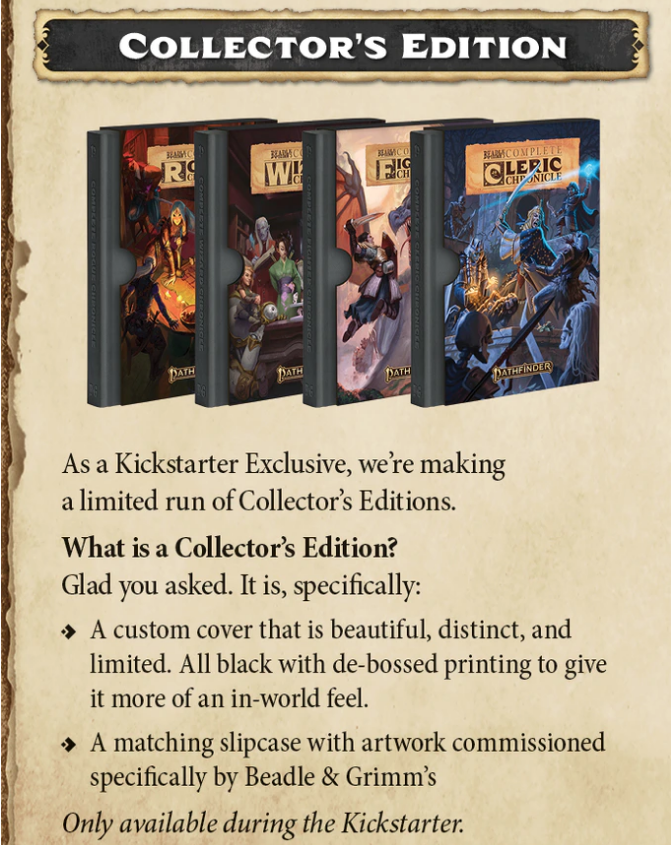 EGG: While I haven’t experienced any of Beadle & Grimm’s products firsthand, these high quality type of products are something you fall in love with when you see them and touch them in-person. Is that your experience with fans that see them at conventions?
MATTHEW: First, we need to change that! Consider yourself on our preview list! As for cons, we think it’s the best way to introduce people to what we do. It’s one thing to get an email or see an unboxing video, it’s another to hold our badges or see the size and scope of our battle maps. Also, personally, we love con’s because we get to engage with people. I think once people get to know us, they’ll understand we’re not your typical company. We are five life-long RPG enthusiasts that are building a company around the idea that if we think it’s cool… so will you. That doesn’t always lead to the best business decisions!

EGG: Thank you for offering that! Beyond the Kickstarter, let’s talk about your company. How did Beadle & Grimm form?
MATTHEW: Honestly, it’s our midlife crisis and we knew that if we left our wives and bought fast cars we would be making the ULTIMATE MISTAKE!
PAUL: We've been playing together since we all met in acting school in NYC back in the early 90’s, and when an opportunity came up to work with D&D we decided to jump in, and how many other people had the same vision for what cool gaming stuff could be.

EGG: You have a nice line of products, what are some of the other items that Beadle & Grimm created?
PAUL: We’ve created limited edition Platinum, Gold and Silver editions of the last five Dungeons & Dragons adventures, which is what we’ve been known for until know. But we’ve just started releasing new products for players, including our Roll Inish! initiative bean bags and the character class dice sets that are part of our Kickstarter. We also have a lot of new products in development that we hope to be announcing in the coming months!

EGG: I’m looking forward to hearing about those. Thanks for talking with me. Where can fans follow Beadle & Grimm at?
PAUL: Egg, thanks for taking the time and for your interest in Beadle & Grimm’s!

This is something that looks to be very engaging for dedicated players. I am going to get the Wizard's book myself.

Jimmy Dick said:
This is something that looks to be very engaging for dedicated players. I am going to get the Wizard's book myself.
Click to expand...

I hope you enjoy it! I dig the concept of what they're doing.

So people actually have characters who live long enough to use journals like these?


Thats what I was thinking. I GM PF2E and the player deaths I have seen would make these books pretty useless if they are a single use product. They are however a very nice looking product.

I've only killed two characters in PFS2 out of 125 sessions. I've had them on the ropes multiple times, but only killed two. Fortunately, thanks to the Achievement Points, players can use the points to save their characters if they want to do so.

Some of their stuff looks really cool, like perhaps these Chronicle books. Alas, I wish that instead of making things more luxurious, they made versions that were cheaper: smaller format, cardboard cover, B&W art, recycled paper, $10.

I love the Pocket Editions in PF because they’re cheaper to buy, more portable, and likely create fewer carbon emission (smaller size, less paper, and lighter weight for shipping). I like those attributes more than faux-leather.

i can see it being nice for say a player that always plays say a wizard to have it as a personal character book, and my wife that loved journaling her characters would like it