Paul Elliott, founder of Zozer Games, kindly responded to my request for a written interview. He is the author of the Hostile RPG and has worked on the upcoming Alien RPG. 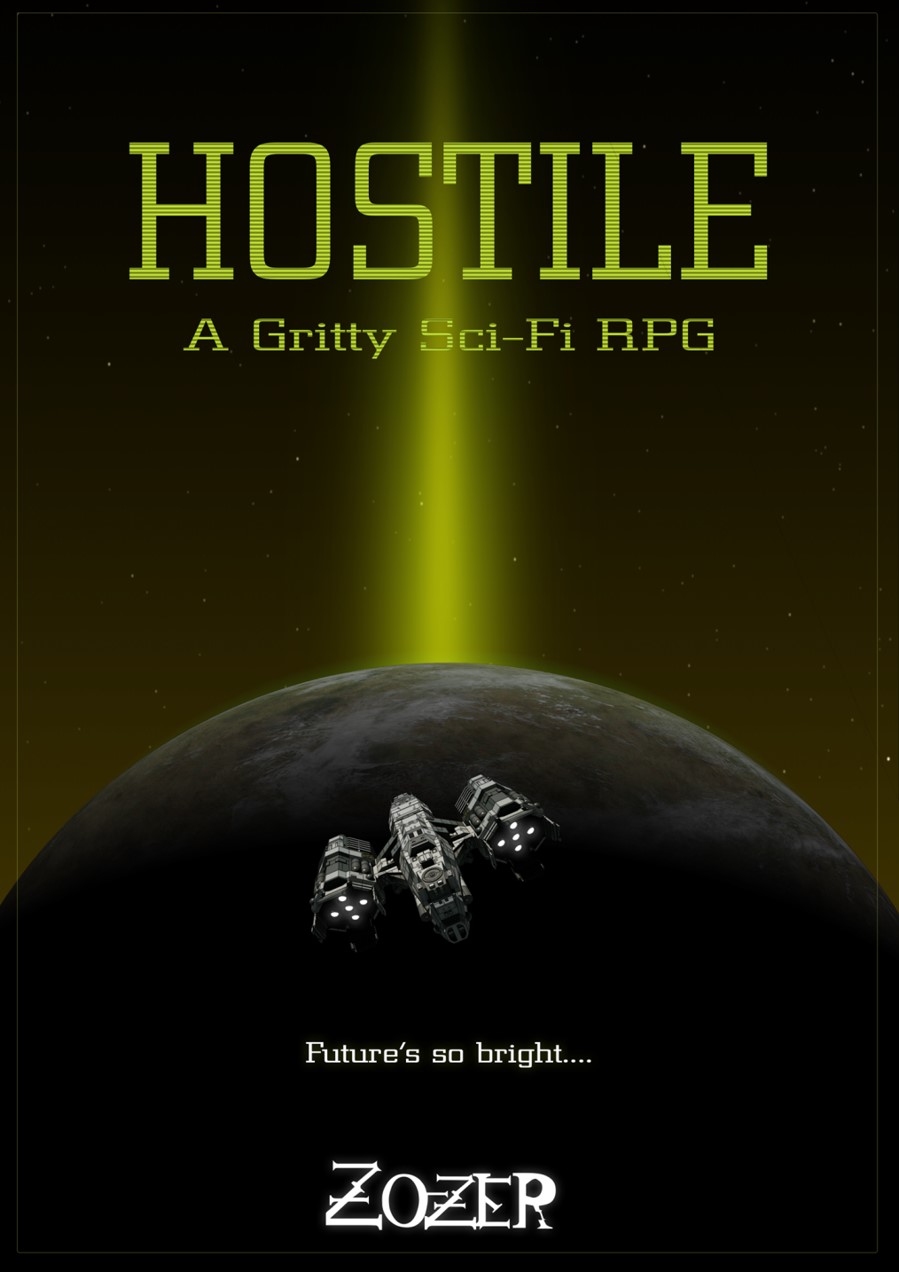 ​
Charlie Dunwoody (CD): What is your RPG design background and what is your favorite created work?
Paul Elliott (PE): I came into RPG design as a rules tinkerer but then as someone wanting to find the ‘perfect’ RPG. I found something inelegant or unworkable in many of the games I was playing. My big break, though, was writing GURPS Atomic Horror for Steve Jackson Games in 1992. This taught me many of the skills and disciplines that I would need to mesh settings with rules. For ten years I wrote my own mini-games to entertain my roleplaying group, culminating in the writing of Zenobia in 1994. Here I was able to write a fast-to-play 2d6 system for an ancient historical fantasy setting, with all the game-play and fun of Basic D&D. It was everything I wanted in a game. It worked – and it proved very popular. I recently published an illustrated and expanded version of the game.

CD: What influenced you to create Zozer Games? Any advice for writers who want to self-publish?
PE: The advent of the internet soon allowed me to post up some of these free games and that was when I created the Zozer Games ‘brand’. It wasn’t until around 2010 that I discovered DrivethruRPG and realized that my future games could be published for sale on this outlet, if I could up my layout and production levels. I’m a professional writer of history books, so the leap was not going to be a big one. DrivethruRPG allows anyone to become a game developer but don’t be fooled. It’s not the concept that sells the game, neither is it the marketing strategy, the cool setting or well organized, edited and attractive layout. It is [FONT=&amp]all[/FONT] of those things! So the EN World reader wanting to self-publish needs to master several skills. Start small, test the water and treat the process with utter professionalism!

CD: Who else do you work with when designing RPGs and what contributions do they bring?
PE: I’ve worked very closely over the years with a fantastic artist called Ian Stead. We share a similar love of re-enactment, Traveller, the Alien movies and sci-fi in general. His starship designs and deckplans are wonderful and packed with engineering detail. He is a modern-day Ron Cobb! Ian’s a cool sounding board for ideas as well.

CD: What RPG(s) are you currently working on? How did your work on the Alien RPG come about?
PE: Zozer Games has a fan base and I’m extremely proud of that. My most popular game is HOSTILE, a gritty, Alien-style setting for the popular Traveller retro-clone called Cepheus Engine. It is Outland, Alien, Blade Runner – but with the serial numbers filed off. I’ve been following it up with a line of supplements: Pioneer Station, Alien Breeds, Hot Zone, Dirtside, the Hostile Technical Manual and the Colonial Marines Handbook. And that’s how I got involved with Free League’s Alien RPG. I received an email out-of-the-blue from the project’s leader who had seen HOSTILE and been impressed with the content and style. He wanted something similar for the Alien RPG and so I ended up writing two-and-a-half chapters for Free League – they are very cool guys to work with and the finished game is going to look spectacular and allow roleplayers to run around the Alien universe, with or without the threat of the xenomorphs.

CD: What RPGs do you play and share one RPG experience.
PE: My gaming has happily come full circle, beginning with my introduction to the hobby in 1982 playing a friend’s D&D game and then buying Traveller a year later. Well, fast-forward thirty-seven years and I’m running a game of the Traveller retro-clone called Cepheus Engine for friends, and a game of Basic D&D for my sons. During the intervening years, of course, I’ve played scores of other RPGs; but maybe it’s nostalgia, familiarity or simplicity – but I’ve returned to those first gaming experiences. My proudest achievement is setting up an RPG club at the primary school that I work at. Running a one-hour game for six ten year-olds is hard but rewarding. Basic D&D and Traveller were always my preferred rules at the club, purely for speed of play.

CD: You engage in historical research and re-enactments. Favorite story? How does it affect RPG writing?
PE: My obsession with fantasy RPGs like D&D and RuneQuest led to me to watch countless epic movies: The Robe, Ben Hur, The Fall of the Roman Empire, Quo Vadis, etc. I read a lot too, and I wound up with a degree in Ancient History & Archaeology. This led to a career writing history books and specializing in Roman military history. Thank you Gygax and Arneson! I soon discovered living history, historical re-creation and re-enactment and used these as a tool to help me write history books that were filled with hands-on knowledge. I’ve done so many things that I had previously only done in a fantasy RPG: I learnt to sling (well), to shoot a bow, throw a javelin, row a coracle, shoot a catapult, defend against archery barrages and cook Roman food on a fire in the wilderness. And we marched ten miles or more in a day across country with rations, waterskins, amour and weaponry – it felt like a quest… I just needed werewolves or trolls to jump out at us…You’d think all of this would turn me into a real hard-ball history nitpicker. Instead it has taught me that what counts is ‘verisimilitude’, the feeling that it is all real and believable – do my players feel like they are really there. That’s the most important thing for me now, not so much the plot or the interesting NPCs.

CD: Predict future trends in developing RPGs.
PE: Predicting the future? That’s tough – but from what I’ve learnt, word of mouth via social media is worth more at this end of the industry than paid advertisements. This has made reviews and the avoidance of negative comments about your work especially important! That’s why I try to be as professional as possible.

CD: Why try one of your RPGs?
PE: I write games, or write for games, that are easy to pick up and play. You certainly don’t need to invest in an entire game line to play Cepheus Engine, for example. Everything is there and the rules are free to download from DrivethruRPG. As science-fiction gaming goes, it’s easy to learn, fast to play and is backwards compatible with almost all of the Traveller material published in the last thirty years. So … Zozer Games’ books make an ideal sci-fi break from D&D or Pathfinder.

CD: Final comments?
PE: We are enjoying a high-point in roleplaying at this moment in time and I’m very lucky to be a part of it. Thanks for inviting me to chat here, Charles, and a good gaming to all!

This article was contributed by Charles Dunwoody as part of EN World's Columnist (ENWC) program. Please note that Charles is a participant in the OneBookShelf Affiliate Program, an affiliate advertising program designed to provide a means for sites to earn advertising fees by advertising and linking to DriveThruRPG. If you enjoy the daily news and articles from EN World, please consider contributing to our Patreon!

Great interview - but then I might be a little biased as I think I was the DM for the Basic D&D game Paul mentions - I was certainly one of the players in Traveller! Good times

Erekose said:
Great interview - but then I might be a little biased as I think I was the DM for the Basic D&D game Paul mentions - I was certainly one of the players in Traveller! Good times
Click to expand...


Thanks. The adventures you participated in sound great.


Thanks. And I'm enjoying Alien too. I ran the adventure in the quickstart and it was amazing. I'm running another adventure at Gen Con. Along with Basic D&D. So my tastes must be similar.

This interview was awesome! Thank you!

mockman1890 said:
This interview was awesome! Thank you!
Click to expand...


Thanks! Glad you enjoyed it.