Played It Review of Survive This!! Zombies!

Survive This!! Zombies! blends old school rules with new innovations and mixes it with a cornucopia of zombies to distill a well-balanced cocktail of gaming enjoyment. The rules, while a bit incomplete, should not hinder an experienced gamemaster. 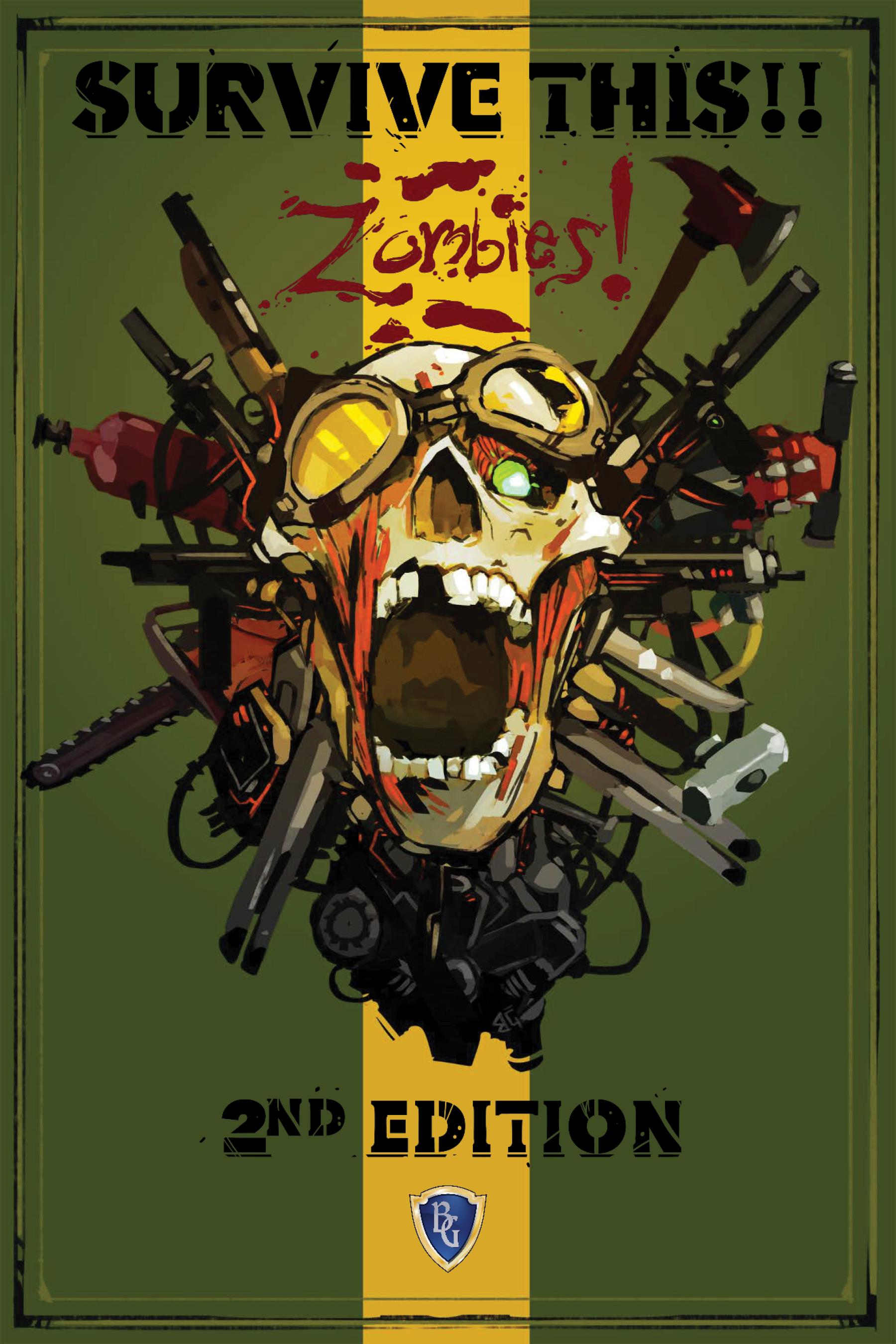 Player characters start by rolling the standard six ability scores along with a seventh, survival, which allows for rerolls. Next, PCs randomly roll a background which provides a bonus skill or ability. Eleven classes range from fixer to mother to be to tracker. Most classes have three abilities that improve at each level. Every character also picks from a list of skills and can increase both skill and saving throws as they level up. There are three optional classes to play: two types of bikers and a bitten survivor who is slowly changing into a zombie. Equipment includes survival gear like backpacks and gas cans, assault rifles and grenades, and even a flamethrower. Each item has a usage die that slowly diminishes until an item breaks.

The Survive This!! rules are used not only in Zombies! but also in Dark Places & Demogorgons and Vigilante City Core Rules which in turn led to a second edition of Zombies!. And perhaps that is where some of the missing rules come in. Specifically, Zombies! calls for Courage saving throws but does not include rules for those throws. I simply used a Mental saving throw although rules for Courage are included in the other Survive This!! RPGs. In addition, the first responder class gets a bonus to First Aid checks but it is not defined as a class ability. I simply used the Knowledge skill to restore 1d4 hit points. First Aid is a skill in the other RPGs. Finally, all Survive This!! RPGs have a ranged combat skill but not a melee skill (there are unarmed skills). I simple added in a melee skill.

All those errors, however, do not necessarily mean the RPG is not worth getting. Honestly, if you know d20 these are quick fixes. And in return, you get an RPG bursting with ideas for zombie adventures. There are over a baker’s dozen of zombies with random encounter tables, NPCs that control zombies, biker gangs, corporate stooges, and five other NPCs. Tables for NPC creation are included complete with motivations and muscle. There are also eleven animals and a d100 random table that includes a couple dozen adventure hook ideas. These GM support tools allow for quick adventure generation and ongoing support for a GM who wants minimal prep.

I ran Zombies! in Alaska inspired by Conspiracy Theories 2: Frostbitten. I had the players roll random backgrounds and we ended up with quite a collection: a prostitute, a guitarist in a Cinderella tribute band named Glass Slipper, a mechanic, and a drunk. Ned, the mechanic, was bitten early on and 1d4 rounds later turned on his fellow survivors as a zombie himself.

In addition to zombies, the PCs faced off against a polar bear, corporate goons, toxic waste, the weather, and the broken engine of a truck. We mostly ignored survival the skill as rerolls didn’t really seem to fit the setting. Honestly, we laughed a lot and there was some real fear when a lot of zombies swarmed the party. Despite some rule hiccups, Survive This!! Zombies! was well worth running as a short three adventure campaign. If you are familiar with the d20 rules you will find the rules easy to adjudicate and the tools helpful in running an end of the world zombie game.

Charles Dunwoody started playing and running RPGs with Advanced Dungeons & Dragons (before it was first edition) and is currently GMing Forbidden Lands. He wrote a few articles for Dragon Magazine when it was in print, wrote a bit more for Mongoose’s electronic Signs & Portents, and was paid for a supplement for Bulldogs! (d20 version) that was sadly never published. Currently, he freelance writes including articles for EN World and Geek Native. He also camps year round, backpacks, and canoes when not reading and writing. Charles is a participant in the OneBookShelf Affiliate Program, an affiliate advertising program designed to provide a means for sites to earn advertising fees by advertising and linking to DriveThruRPG.
Share:
Facebook Twitter Reddit Pinterest Tumblr WhatsApp Email Share Link