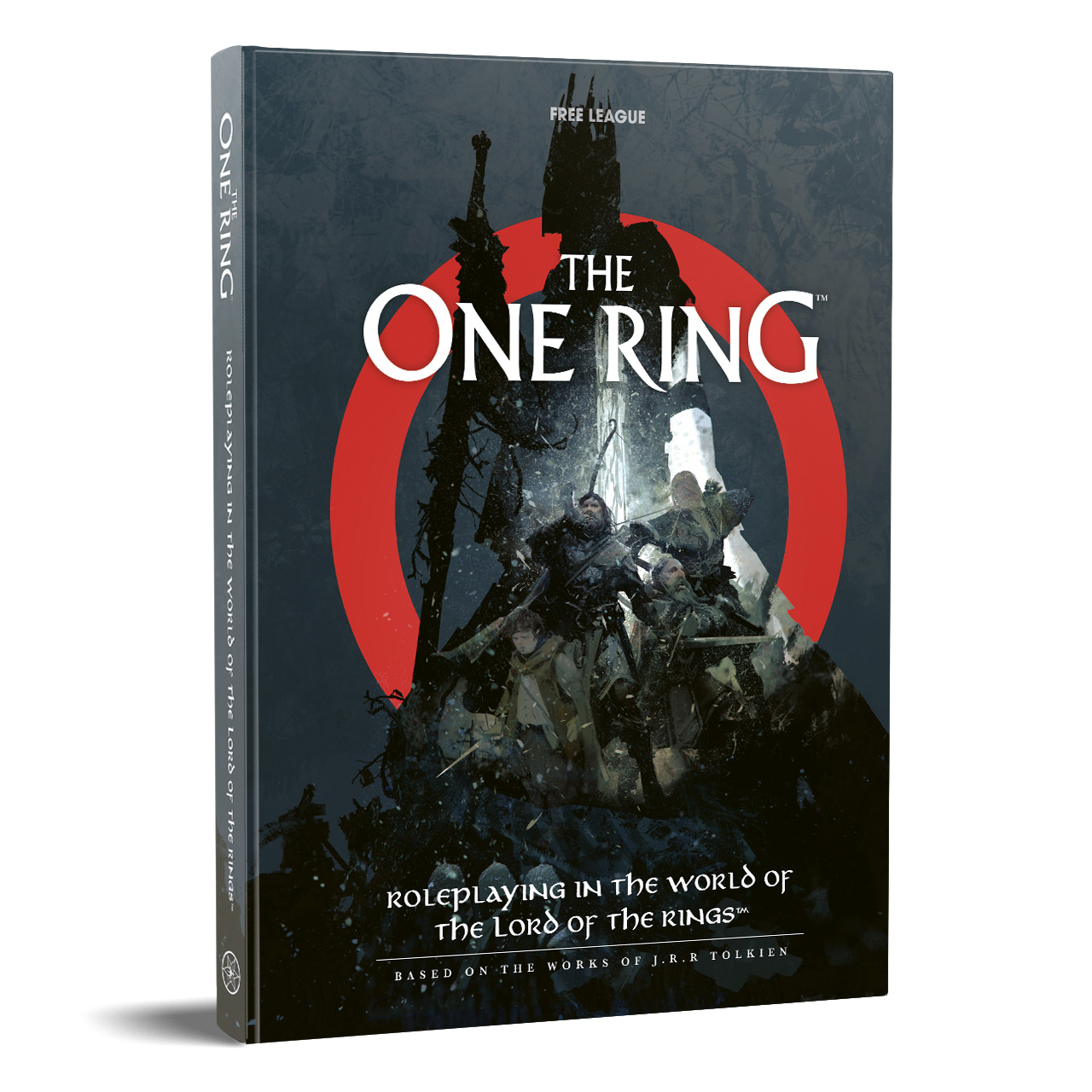 The Lord of the Rings is a story about the journey. Mordor is scary and memorable, but the books and films are more about the adventures and the people along the way. The One Ring also focuses on travels. There are rules for classic fantasy battles, of course, but also a lot of pace devoted to finding the path, unexpected encounters and the weariness that sets in from a long trip, no matter how important it might be. Free League Publishing sent me a review copy of The One Ring core book and the Loremaster’s Screen and Rivendell Companion. While I have heard good things about the first edition, I didn’t look at those books until after reading this edition so this review will have few, if any comparisons between editions. I’m coming into this game fresh as someone who enjoyed the books and films set in Middle-Earth but am not a hardcore fan.

The book comes up to the excellent standards of Free League Publishing. It’s laid out like an illuminated manuscript, featuring gorgeous two page chapter spreads by Free League’s talented painters along with detailed line art scattered throughout the chapter pages. The regular volume is handsome enough but this is the first time I’ve ever looked at one of the limited editions Free League put out with envy.

I covered most of the mechanical basics in my review of The One Ring Starter Set. For the sake of completeness, the basics are a TN based on a characters’ attribute that’s overcome by a d12 plus d6s for every point in a skill. There are a few additions in the main game, most of which are feat-like character bits that can make characters roll more dice in certain situations. My favorite of these is Brave In A Pinch which gives Hobbit who chose it more dice when they spend Hope if their character is suffering a bad condition.

Characters in the full rules can be built from several cultures: the Men of Bree-land, the Bardings, Elves of Lindon, Dwarves of Durin’s Folk, Hobbits of the Shire and Rangers of the North. Building a character combines a culture with a calling and choosing various gear. Gear choice can have an effect on a character if their Endurance drops past their Load rating, they become Weary and rolls are less efficient. It’s one of the ways that The One Ring makes you consider travel more than battle for your character.

(As a brief aside, the Loremaster’s Screen and Rivendell Companion contains the info for making Riverdell PCs and info on those elves. It seems like info that could have been fit into the main book, but completists will want to know where Elrond and his crew are located.)

Once individual characters are built, the players create their Fellowship which will seem familiar to fans of previous Free League games. Players choose their headquarters, determine their Fellowship and choose their Patron. The Patron is generally someone from the books or the Lore and it gives the players a chance to tell the Loremaster their story focus. Gandalf the Grey will send your crew on missions that warn the Free Peoples that Sauron is coming while Tom Bombadil will have your crew protecting ancient treasures. This seems like a solid middle ground between shuffling canon characters away from the game and worrying that their actions will overshadow your heroes.

Campaigns alternate between Adventuring and Fellowship Phases. Adventuring Phases are the most common as they focus on three main elements: combat, council and journey. Combat plays out like one might expect, though it’s more on the Theater of the Mind side of things. Council involves social skill challenges where players must get a certain amount of successes within a certain amount of turns. The journey element is where The One Ring really feels focused on telling a Tolkien story. The Patron tell the group they must go to a place and do something, the players map their route using the one in the front of the book and then the Loremaster consults the one in the back of the book to determine when to roll on encounter charts and how much Fatigue to drop on players. Remember Load? Fatigue adds to that number and a few days' muddy journey through heavy rain can make an encounter with a bandit far more harrowing when everyone just wants to hit the inn and sleep.

It’s tough being a hero in Middle-Earth, however, because the Shadow is everywhere. That sense of fatigue wears on characters in a mental sense too. This mechanic feels a little like corruption but also is a dark mirror of how players spend Hope for better dice. Each Calling has a specific Shadow in mind, most of them inspired by characters in the fiction and characters take on that Shadow the longer they are out trying to fight the forces of evil. I’m generally not a fan of Bad Guy Point mechanics but these were thematic and made it easy to understand how someone goes from Smeagol to Gollum in this world.

The Fellowship Phase is how the players push back the darkness. At the end of each tale, they take downtime actions to prepare for their next adventure. This can include studying materials for die bonuses to writing songs about their recent adventure to sing during the next one. The most Tolkien-esque option outside of the song is the legacy gaming element of preparing an heir for the next Fellowship. Even though the game covers a few decades between the books, tables can prep the next generation for the War of the Ring just like Bilbo gave Frodo the titular ring he found.

Despite my shortcomings as a master of Tolkien lore, I feel confident in running The One Ring for friends who love the setting. The book even discusses an out; Tolkien wanted to create a mythology complete with different takes on historical events and odd characterizations. Perhaps the tales you tell with The One Ring are of the true heroes of Midde-Earth and just aren’t as widely known.
Click to expand...

Just got my copy of the book and boxed set the other day. They are beautiful and I've enjoyed reading them. Unfortunately, I doubt I'll have the opportunity to run any TOR games in the near future, but they'll provide a good bit of lonely fun as I read through them.

Our long-time Middle Earth group is currently using the 5E Adventures in Midde Earth sources, and it's working fairly well.

We're soon ending our 3+ year campaign, and are talking about using this new version of the One Ring for the next campaign. (I do have the 1st edition, which was quite solid, but sounds from the overall reviews I've read that the 2nd Edition is a nice step-up?)

Wasn't there some drama about this? Like, wasn't Cubicle 7 gonna make 2e and they suddenly "lost" the license or something? Did anybody ever find out the whole dealio there?

eyeheartawk said:
Wasn't there some drama about this? Like, wasn't Cubicle 7 gonna make 2e and they suddenly "lost" the license or something? Did anybody ever find out the whole dealio there?
Click to expand...

IIRC there was no confirmation of what happened but Cubicle 7 in their release said they "decided to end their licensing agreement with Sophisticated Games". People were hypothesizing that Sophisticated Games upped the money they wanted but as always with these things I don't think it was ever confirmed.

Jer said:
IIRC there was no confirmation of what happened but Cubicle 7 in their release said they "decided to end their licensing agreement with Sophisticated Games". People were hypothesizing that Sophisticated Games upped the money they wanted but as always with these things I don't think it was ever confirmed.
Click to expand...

There was explicit mention of creative differences between SG and C7, and between C7 and Francesco.
C7 had been very clear the direction they were going; TOR 2E is about 90° off from C7's announced.

aramis erak said:
There was explicit mention of creative differences between SG and C7, and between C7 and Francesco.
C7 had been very clear the direction they were going; TOR 2E is about 90° off from C7's announced.
Click to expand...

Ah-ha - I was wondering if that was ever confirmed or if it was just rumors that were scattering around.

Jer said:
Ah-ha - I was wondering if that was ever confirmed or if it was just rumors that were scattering around.
Click to expand...

It didn't help that their forums came down about the time they were announcing 2E... GDPR killing so many forums in European companies.

Started reading it and OMG I love it so far. Reminds me of AD&D almost.

MNblockhead said:
Just got my copy of the book and boxed set the other day. They are beautiful and I've enjoyed reading them. Unfortunately, I doubt I'll have the opportunity to run any TOR games in the near future, but they'll provide a good bit of lonely fun as I read through them.
Click to expand...

There will be some solo rules released soon, so that might give you a shot to try things out. Or before those are released you can try the introductory solo adventure I wrote: A Sorry Sight at the Eye: TOR 2e Intro Solo adventure.

@ShadowDenizen - I was a fan of 1e but think 2e is a big step up, I like things like Attributes mattering more, the changes to favoured skills, patron rules, hope refreshing more quickly etc. The journey rules are faster to use too while still delivering flavour and a mechanical challenge.

Thanks, @Harlath ! It's always helpful to have my initial opinions reinforced! And those issues you mentioned were some I had with the 1E. (Particularly attributes mattering more. If I want attributes to not matter, I'll play Fate. [Ha Ha!])

DarkCrisis said:
Started reading it and OMG I love it so far. Reminds me of AD&D almost.
Click to expand...

Now that was unexpected.

Free League’s The One Ring now in PDF!