Launching on May 31st via Kickstarter, 9th Level Games brings Return to Dark Tower RPG - Roleplay in the Four Kingdoms. I’m a fan of this Polymorph system, it’s innovative and simple, yet detailed enough to spark great games. In the run up to their campaign, Powered by Polymorph and Return to Dark Tower designer Chris O’Neill agreed to answer my questions about the RPG, the campaign exclusives, and how the system works. 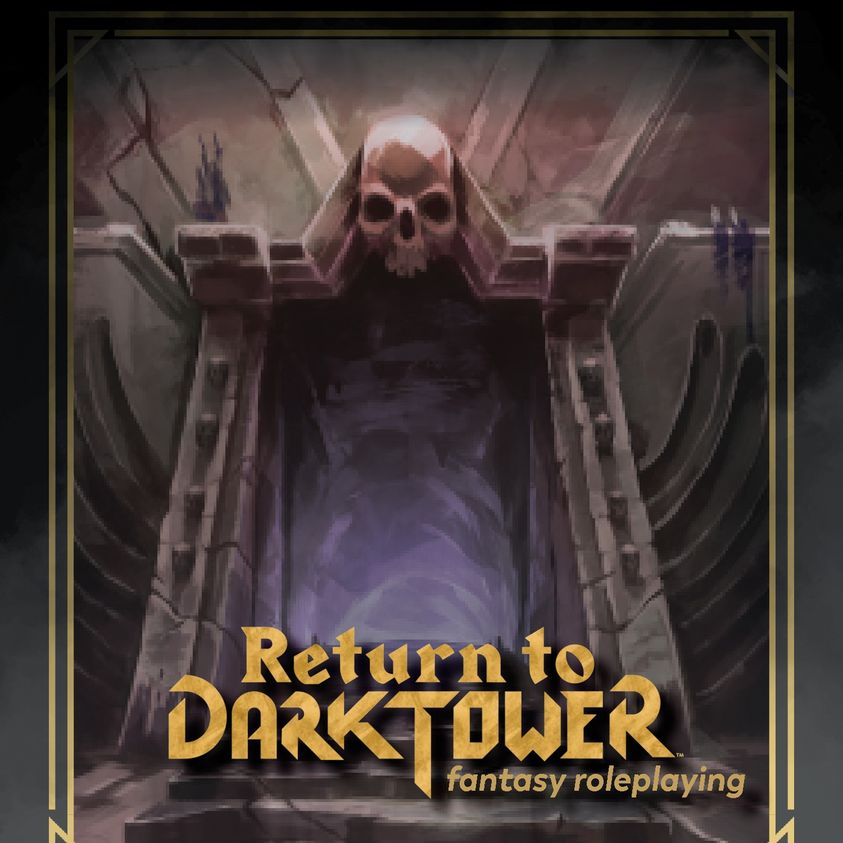 EGG EMBRY (EGG): Thanks for talking with me. You have a new project on Kickstarter, Return to Dark Tower RPG, what is it?
CHRIS O'NEILL (CHRIS): Return to Dark Tower Fantasy Roleplaying is a complete polymorph RPG set in the world of the “The Four Kingdoms”. At its heart is the idea that a “Great Evil” has taken up residence in the DARK TOWER at the Heart of the Four Kingdoms, and the players take on the roles of heroes and their companions to stop that adversary from their nefarious plot. The game itself is built as a campaign of linked adventures that plays out like an epic fantasy novel.

EGG: Return to Dark Tower's connection to the original boardgame, is this a direct tie in or is it more of an homage?
CHRIS: Return to Dark Tower Fantasy Roleplaying is an ancillary product to the boardgame – but we are working closely with Restoration Games to ensure that the game is true to the boardgame. Everything that you love about the boardgame – from the Bane of Omens to the River of Fire, from Dungeons and Ruins, to Being pursued by Oreks is part of the roleplaying game. In fact, our PLAYER TOWER dice roller and reference screen can be placed on the center of the boardgame board itself to give you the focus. You can use the board and minis from the boardgame as visual aids in the RPG as well – especially for the task of tracking the enemies movements across the year! The best thing that we can say about the ties between the RPG and the boardgame is this quote from Rob Daviau, lead designer of the boardgame, “I heard the pitch for the game and immediately wanted to play. It captures the feeling of Return to Dark Tower perfectly. Very excited to see this come to life.”

EGG: I’ve had the chance to play a polymorph roleplaying game, The Excellents, at Origins 2021. The concept is so novel and inspiring that I bought MAZES, the “thoroughly modern take on the original RPG of dragons, dice, and dungeons,” at the show. How does the polymorph system work?
CHRIS: Oh, thanks for that Egg! Polymorph works differently than most game systems in a few ways – the most important is that you have a single die that represents your character – a d4, d6, d8, or a d10. The die that that you choose determines your “role” in the party, as well as what you “roll” to do things. Within a polymorph game you only ever roll your die – so if you’re the d8, whenever you roll you always only roll the d8. You usually are rolling against what we call the RESOLVER – a matrix that is literally printed on your character sheet – to determine if you succeed or fail at an action or a save.

EGG: The system is quite fun. In this version of polymorph, will there be differences in the engine?
CHRIS: Return to Dark Tower has a few twists and turns – as its focus is on playing larger than life heroes. The core mechanics are the same – but the scope and scale of things are a little different. One of the biggest changes is that everyone makes two characters – a HERO and a COMPANION. The Hero is epic – and has followers and henchmen; the companion is more of a traditional adventurer. Since our game is played out across a world map, against an epic foe – the players will take on different kinds of challenges where each HERO can have a different spotlight. While one player is acting as the hero, the other players can play their companions. Most of the core changes are really on the GM side – where we are giving GMs tools to build and play this EPIC level of play. 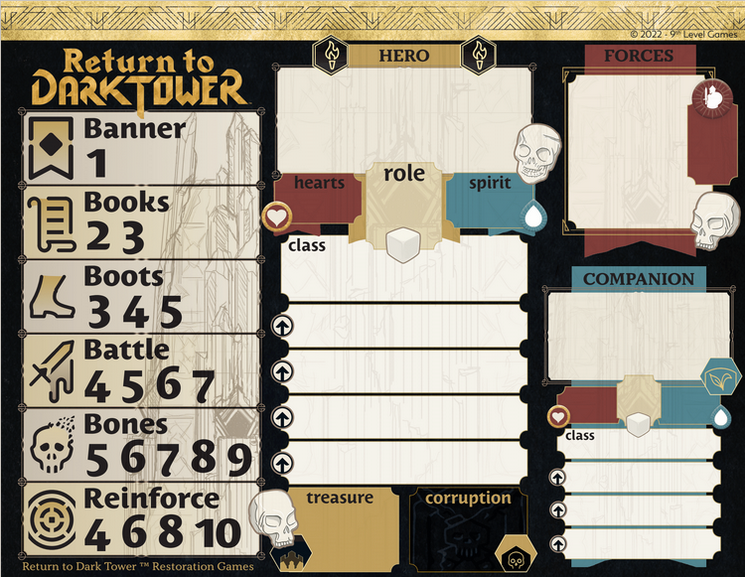 EGG: How compatible is this with MAZES?
CHRIS: So, the cool thing is that everything we are doing for MAZES and Return to Dark Tower are compatible with each other. Companion characters for Dark Tower are essentially Mazes characters (you could even take your existing MAZES characters and drop them into a Dark Tower game). Heroes are the same, but they have a new ability called FORCE (such as a Cabal of Witches, a Squad of Soldiers, or a Pack of Bears). A MAZES adventure module is the equivalent of a DUNGEON in Return to Dark Tower – meaning that you could run a DARK TOWER dungeon in MAZES, or use any MAZES module as a Dungeon. Unlike MAZES currently, Dark Tower also embraces other types of “scenes” – politics, fighting giant monsters, etc.

EGG: How does the game’s one year time limit work? This is for “a series of procedurally generated adventures.” How will these be created?
CHRIS: So, to fully realize the world of DARK TOWER – the game is structured to provide a framework that tells a specific kind of story – the heroes gather and attempt to thwart the machinations of an evil adversary that results in a final showdown. In addition, you can either take an existing Adversary (like the ASHSTRIDER or the BANE OF OMENS) or make your own. The game has prompts and directions to follow to make it easy for a game master to create these “plots” – or as we call them in Dark Tower – SEALS. There is a hard “in-game” timer – of one year. The players take actions that spend time (like traveling or delving) attempting to gather resources, defeat a SEAL before it comes to fruition, or deal with a SEAL that has triggered.

EGG: Let’s talk about a few of the items that you’re offering on the campaign.
CHRIS: Well, the heart of the campaign is the hardcover rules for RETURN TO DARK TOWER Fantasy Roleplaying. The book will be styled like a throwback 1980s AD&D “orange spine” hardcover. I’m of the right age to be excited by Dark Tower nostalgia, and we wanted to celebrate that in a way that would make a subset of fans excited. In addition, we are going to be doing an exciting Accessory Set that will include a GM SCREEN and PLAYER TOWER. This will let you use your minis and game board from the return to Dark Tower boardgame as part of your setup for the RPG. 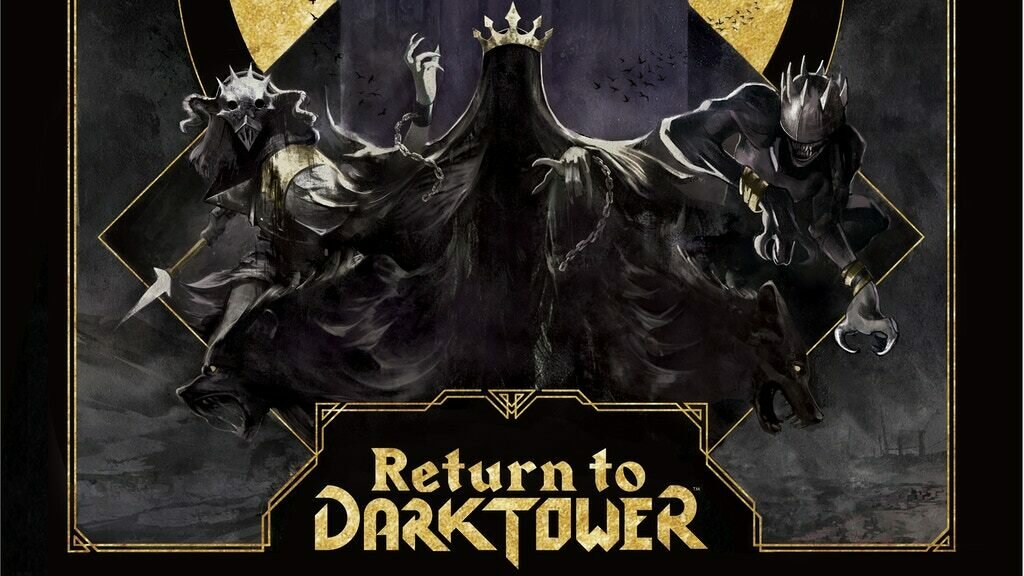 EGG: What can fans that sign up to your Backerkit landing page before the campaign get?
CHRIS: If you sign up for the project before launch on our BACKERKIT landing you will receive a “gold” DARK TOWER coin – showing a day and night view of the tower. In the game, you can use the coin to determine random outcomes, as well as track day and night status. It’s a rad looking coin that is being made by Campaign Coins.

EGG: What bonus can backers from the first 48 hours expect?
CHRIS: Anyone that backed our MAZES campaign in the first 48 hours received a special zine we made that we called the MAZES “demake”. Basically, the idea was to pretend what Mazes may have looked like if we had made the game in 1979 instead of 2019. Well, the original DARK TOWER boardgame came out in 1981, so we are doing a DEMAKE here as well – pretending what an RPG might be like if it came out in 1981. It’s a really fun little side project, and the printed ZINE will be exclusive to first 48 hour backers.

EGG: On top of that, you’re offering a Kickstarter bonus, correct?
CHRIS: This is super exciting. We are offering all the Return to Dark Tower RPG Roll20 MODULE with every pledge level. Roll20 and 9th Level Games worked it out so that everyone pledge tier backer will receive this as part of their pledge – that’s a value of $50!

EGG: Beyond Return to Dark Tower RPG, what else are you working on?
CHRIS: Well, we’re always working on a ton of projects. Right now, our focus is on getting the MAZES hardcovers into peoples hands, as well as starting our new MAZES module like – MAZES MONTHLY. We are also working on VENTURE SOCIETY, a roleplaying game for kids and kids at heart about animals working together to fix problems. Venture Society is a polymorph game that is fun to play, but also meets all the objectives and requirements for therapists and educators to include in their practice. Earlier, Egg, you talked about the THE EXCELLENTS. We have two new books in our AWESOME WORLD line coming out later this year – NANCY DRUID and HORSESHOE ACADEMY – which are compatible with and set in the same world as THE EXCELLENTS.

Never played Dark Tower myself, but always wanted to. Interesting system, and the new art is very evocative!

I agree. And the Kickstarter for the RPG is live now!