Oz has been associated with kid literature since its debut, but there's a darker side. These creatures are proof that nobody should be alone in the woods at night in Oz. 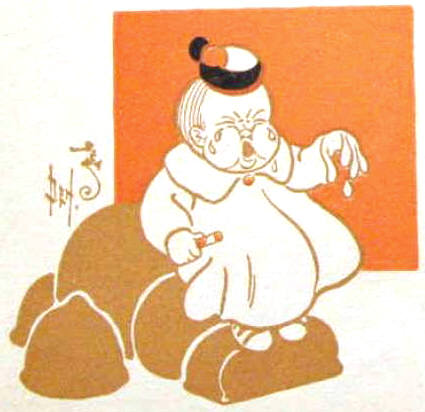 It's perhaps no surprise that several of the creepy beings in the list come from Dot and Tot in Merryland. Merryland was established as being part of the Nonestica universe when Queen Dolly visited Ozma on her birthday in The Road to Oz. She was also accompanied by a candykin, a being made entirely of candy, thereby establishing Merryland as part of the Oz canon. What's so disturbing about candy people? When they break, they eat each other. They're candy cannibals:

"That is one of the drawbacks we suffer from being made of candy. Only two days ago, Mr. Gunther, a particular friend of mine, fell down a hill and was broken into seventeen different pieces." "Dear me!" exclaimed Dot. "What did you do with him?" "Oh, as he was ruined beyond repair, we divided him up among the neighbors who loved him best, and ate him the next morning for breakfast." "Ate him!" cried the girl, who was greatly shocked. "Certainly; Mr. Gunther was a very sweet man." "But this is horrible," said Dot, with a shudder. "You are all cannibals!"
Click to expand...

You can create candykin in Dungeons & Dragons by reskinning a commoner. Give them immunity to poison and the poisoned condition and vulnerability to fire. 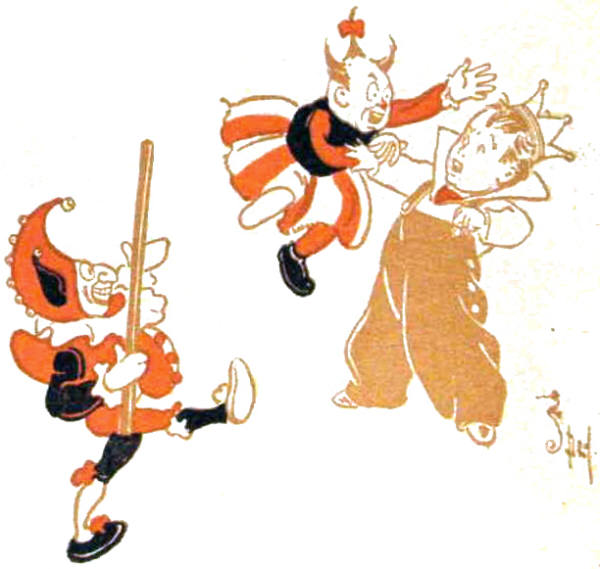 Queen Dolly is one of many dolls who manages all of Merryland. A doll herself, she has a variety of doll servants and citizens. In addition to the fact that she's a creepy doll, Queen Dolly is capable of turning people into dolls (she threatens Tot and Dot with this power) and consults a "thinking machine" that we never see but sounds an awful lot like some kind of robotic overmind:

You can reskin duodrones as doll servants and citizens, just reduce their size to Small. For the queen, reduce the medusa's size to Small (her petrification power is dollification instead) and change her type to construct. 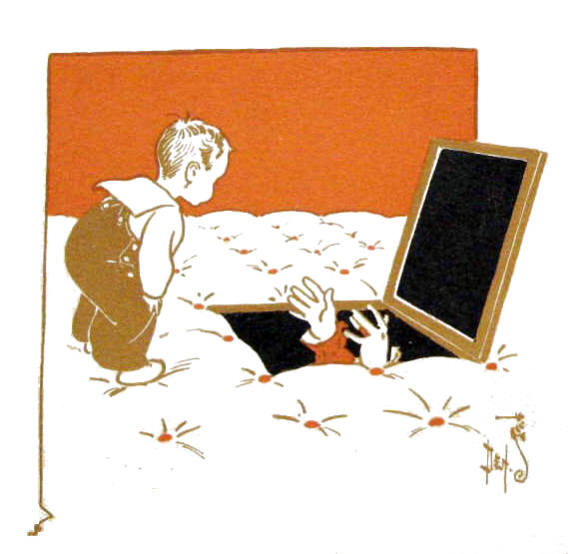 Lots of people are afraid of clowns. But if you look at the above picture, you can see why the artwork hasn't aged well. Also residents of Merryland, they're terrible role models for kids. Clownfolk eat things that would normally poison a child, all because it's supposed to be funny:

"Well, I have in my cupboard some fried goldfish, boiled buttercups and pickled shoelaces," he answered. "Don't want any," said Tot. "These seem rather foolish things to eat," remarked Dot. "Of course, they are foolish things," agreed Flippityflop, cheerfully. "Everything we do here is foolish. You certainly can't expect wisdom in a country of Clowns."
Click to expand...

You can reskin the satyr stat block as clownfolk easily enough. 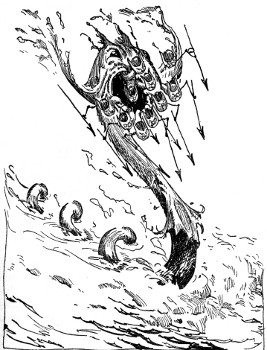 These creatures seem relatively harmless separately, but that's not how they're normally encountered. When Captain Salt faces one down in Captain Salt in Oz, they transform into a huge sea serpent formed of teeming goblins, with their spears as teeth:

Its body was leagues long and yards through, the head was large as a whole elephant with a long curling silver tongue and darting green fangs. But it was the teeth that made even the stout heart of Ato hammer against his ribs. Each tooth of this singular sea serpent was a live white goblin brandishing a long spear. Leaning far out of the yawning mouth, they screamed, hissed and yelled at the defenseless company below.
Click to expand...

To represent individual sea goblins, add the Amphibious trait to the goblin stat block, give it a swim speed equivalent to its walking speed, change its type to elemental, and give it the Water Form trait, damage resistances, and immunities of a water elemental. For the larger swarm, use the above stats and apply them to a giant constrictor snake with the Swarm trait. 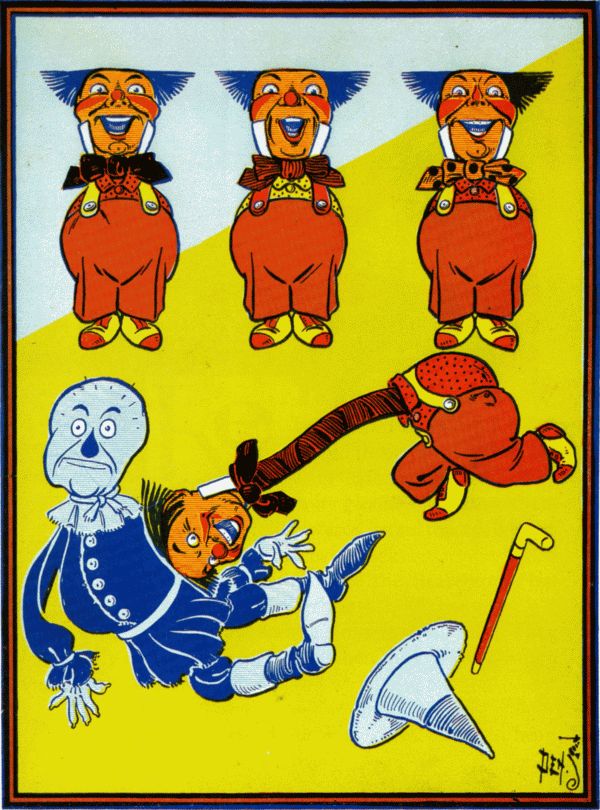 These hammer-headed beings are just a head atop two feet, with a long flexible neck--think E.T. the Extraterrestrial without any arms. They appear in the original Wizard of Oz, and they pop out of their holes for the sole purpose of headbutting anyone who comes their way:

He was quite short and stout and had a big head, which was flat at the top and supported by a thick neck full of wrinkles. But he had no arms at all, and, seeing this, the Scarecrow did not fear that so helpless a creature could prevent them from climbing the hill. So he said, “I’m sorry not to do as you wish, but we must pass over your hill whether you like it or not,” and he walked boldly forward. As quick as lightning the man’s head shot forward and his neck stretched out until the top of the head, where it was flat, struck the Scarecrow in the middle and sent him tumbling, over and over, down the hill. Almost as quickly as it came the head went back to the body, and the man laughed harshly as he said, “It isn’t as easy as you think!”
Click to expand...

Reskin goats to be hammerfolk by changing their type to humanoid, giving them an Intelligence of 10 and the Common language, and extending their reach for the ram attack to 10 feet.

Of course, these conversions are rough approximations. To see how I gave full statistics to all of these monsters, see 5E Foes: Oz Bestiary. Now that we've cleared the deck for the mildly creepy monsters of Oz, in the next installment we'll get into the really serious messed up creatures that may give kids nightmares.
Click to expand...

Brilliant idea for a Medusa to turn folks into dolls. Super creepy, the players would love / hate it!

We all float down here...

'The thing gave a jump and turned half around, sitting in the same place but with the other side of its body facing them. Instead of being black, it was now pure white, with a face like that of a clown in a circus and hair of a brilliant purple. The creature could bend either way, and its white toes now curled the same way the black ones on the other side had done"
Click to expand...

Tonguez said:
I'm really suprised you didnt include Wheelers - those guys creeped me out
Click to expand...

Note that this is just the bottom half of the top 10. I'm assuming the wheelers will be in the top 5 (they'd be in my top 5 at least).

Jer said:
Note that this is just the bottom half of the top 10. I'm assuming the wheelers will be in the top 5 (they'd be in my top 5 at least).
Click to expand...

They are and pretty sure they're in everybody's top 10. Freaky weird things!

Friggin' Ravenloft Doll Golems gave me the shivers way back when... Great list.

Tonguez said:
I'm really suprised you didnt include Wheelers - those guys creeped me out

yeah I didnt realise until after posting that this was only half of a top 10, Im definitely keen to see what the top 5 are
Last edited: Oct 24, 2021

Scoodlers and Wheelers are def in my top 5 - ugh. And those guys who would throw their heads at you, maybe from TikTok in Oz?