Review of Junkyard Blues for M-Space

Filled with interesting ideas, Junkyard Blues for M-Space works well as a sandbox setting and, if the GM keeps a few points in mind, as an adventure. This review will cover the sandbox setting and wrap up with some ideas to help a GM run it as a full-fledged adventure. 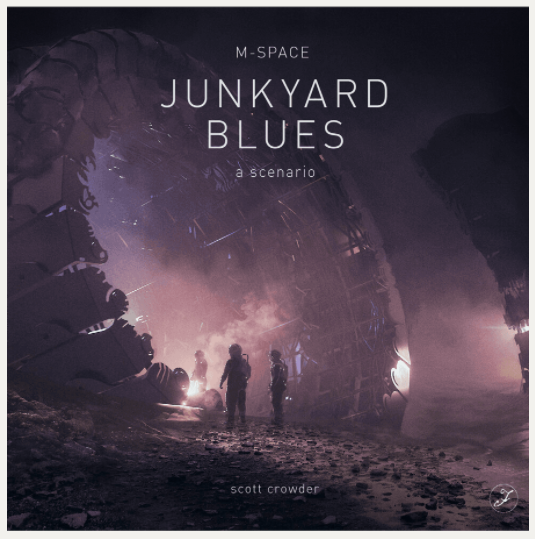 My thanks to Clarence Redd for sending me a copy to review.

The PCs are pulled into and trapped in a floating junkyard while onboard their ship the Darklight. With the Darklight's powerful new FTL engine, the PCs may be able to escape. But they have to gather enough metal called Casimirium to shield the engine first. Along the way they will interact with and come into conflict with a variety of beings and face dangerous challenges. The set up is simple, the obstacles are interesting, and the stakes are high. This review isn't going to cover the adventure step by step but rather hit some highlights and note some things GMs need to prepare for before running Junkyard Blues.

There is a lot going on in the Junkyard and a wide range of encounters from booby trapped ships to dangerous aliens. The large sandbox includes several places to explore, many perils to overcome, and a variety of negotiations and first contacts to navigate. All while the PCs are trying to find their own way to escape. There are a large number of humans trapped aboard a collection of marooned starships they call the Can and these humans are going to do whatever they can to get out of the Junkyard using the PCs' ship. And the alien Wuh'ja'ta will oppose the PCs' attempt to escape at all.

I like the sentient spaceship and the humans eking out a perilous life and believing they have no chance of escaping. But my favorite part of the Junkyard are two of the three alien races, The aliens are unique, non-human, and act and communicate in ways different from human beings.

The silicon-based lifeforms known as the Wuh’ja’ta are former militant spacefarers who have mutated into dangerous fanatics. They communicate though electrical impulses. And the wormlike Creavalle who helped the humans of the Can survive but are also smart enough to distrust those same humans. They use text to talk to aliens and have a secret way to communicate with each other.

I do think GM need to read the whole adventure and do some additional planning. For example, for the PCs to find a solution to escape, they have to succeed at an Engineering roll. Nothing is explained about what happens if they fail this roll, but the rest of the adventure revolves around implementing this solution. A GM might be better off not requiring a roll at all.

Also, the crew of the Darklight numbers 40. This large crew means the PCs will have enough force to overwhelm the inhabitants of the Can. In the adventure, humans from the the Can approach the PCs to see if they will come with them back to their home. Instead, the Can might choose not to send a group to the PCs’ downed ship at all, and instead just wait for the power to fail and the PCs to die. During the wait, if the PCs are sending smaller parties to explore, the Can might approach those smaller groups and try to get them on their own side and maybe even get them to mutiny claiming the PCs in command will not actually find a way to escape before their air fails.

The adventure also assumes that if the Can offers aid that the PCs will simply play games to determine who in their crew will die since there is not enough air to support everyone on the Can and everyone from the Darklight. GMs should have other options ready as many players will not go along with a plan that would end up with them spacing their own crew. Many PCs will fight or try to come up with a solution, not dice with death.

Finally, those humans on the Can might not agree to this game of getting spaced either. Factions may have formed. If this has happened, PCs might be able to exploit the situation to find options beside sending people out of an airlock in an attempt to ensure survival. The adventure doesn't have any details on factions like this developing, but a GM could easily use the details included to create factions in the Can for the PCs to work with and against.

The editing in Junkyard Blues has some copy and paste errors for the non-player characters such as the alien Creavalle getting the Wuh’ja’ta description and the human Can inhabitants getting the Telepathy and Telekinesis of the Creavalle. Pregenerated PCs are mentioned but none are included. Nothing a GM can’t get around and nothing vital seems to be missing.

Should You Get It?

These are some minor challenges a GM should get ready for and there are a few minor editing errors. However, the adventure overall is excellent. The sandbox is filled with interesting NPCs human and alien alike, dangerous challenges, and factions all vying for control with their own agendas and goals. The ship provided for the PCs is big enough for exploration but with a crew small enough that they can get to know all of their crew. And PCs could spend quite a bit more time in the Junkyard after the first adventure depending on the actions they take.

Junkyard Blues is another excellent sandbox setting and adventure for M-Space. With a little prep, a GM will have a location ready to go that can serve as a springboard for many adventures.
Last edited: Dec 14, 2021
Click to expand...

Charles Dunwoody started playing and running RPGs with Advanced Dungeons & Dragons (before it was first edition) and is currently GMing the One Ring 2E. Currently, he freelance writes including articles for EN World and Geek Native as well as his first PDF adventure for Call of Cthulhu: Michigan Mythos: Fall Colors. He wrote a few articles for Dragon Magazine when it was in print, wrote a bit more for Mongoose’s electronic Signs & Portents, and was paid for a supplement for Bulldogs! (d20 version) that was sadly never published. Charlie is a participant in the Noble Knight Affiliate Program and the OneBookShelf Affiliate Program, both of which are affiliate advertising programs designed to provide a means for sites to earn advertising fees by advertising and linking to Noble Knight Games and DriveThruRPG respectively.
N

M-Space is one of my top "wish-I-could-convince-people-to-play-this" games. Glad to hear this addition to the cannon is as good as the others.

NerdyBird said:
M-Space is one of my top "wish-I-could-convince-people-to-play-this" games. Glad to hear this addition to the cannon is as good as the others.
Click to expand...


I agree. I do wish this one had pregens because running it as a one or two shot would be easier and players could experience the game first hand.

Thanks Charles for a thorough review. Pregens are coming soon!

Anyone has experience running M-Space? It looks interested, but the previews are pretty limited on DriveThruRPG and I have a hard time finding some reliable information as to what type of sci-fi game it is and what to expect.

Hey @TheAlkaizer , the writer of M-SPACE here. I would say the game is pretty close to Traveller and Star Wars, with a grittiness that often comes with BRP. But people have used it to simulate The Expanse, Valerian and Laureline and Bladerunner as well. So, it’s quite flexible.

The rules are based on a light version of Mythras (Mythras Imperative, a free download on DriveThru). If you have tried RuneQuest or Call of Cthulhu, you will feel right at home in M-SPACE. The main rulebook has no setting, but the published scenarios come in a few different flavours.

If you want more details - from a more objective source - check out the review on Runeblog:

Review of M-Space: d100 roleplaying in the far future

And here’s a review for M-SPACE Companion as well (which adds modular robots, cybernetics and lifepath PC creation):

Rereading this review, I note an error. The Darklight doesn't have a crew of 40. It has a crew of six. It takes 40 modules to create 8 crew quarters in the M-Space starship construction rules. That must have been the source of the misunderstanding. It didn't help that the six crew members, who were submitted as pregens, were omitted by the editor right before going to press.
Last edited: Nov 24, 2022