Steam and Steel introduces world information and rules for vehicles and ships to Age of Sigmar - Soulbound. In addition, it covers dozens of new pieces of equipment and includes rules to help crafters as well as crew of vehicles and ships. 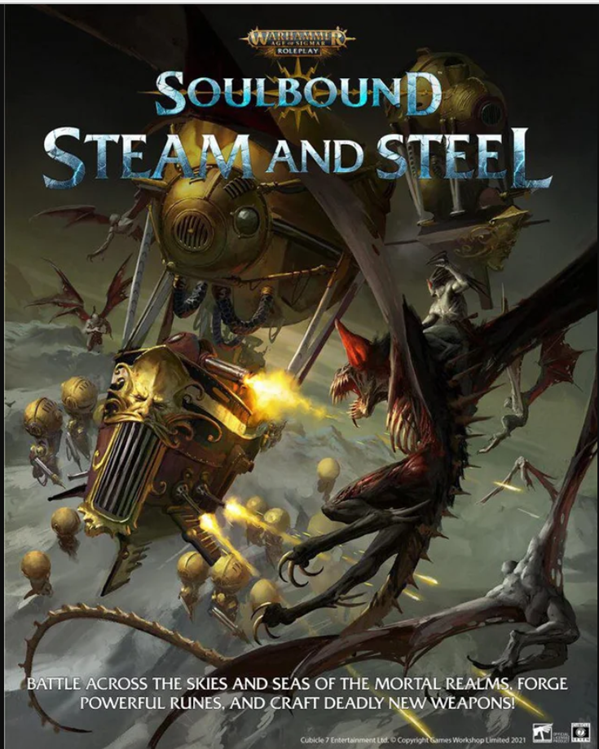 My thanks to Cubicle 7 for providing me a review copy to continue my coverage of everything Warhammer Fantasy RPG related. Steam and Steel is a 126-page full color hardcover divided into six chapters.

Forges of the Realms discusses why a Soulbound might craft, for example for religion or for family. It includes several new Talents for crafters and crew. There are Endeavour to make items, many with high DNs. These can result in extra time needing to be spent or that they be abandoned if not finished. Finally there are two new Contacts: apprentice and artisan. All of these elements will tie Soulbound more closely to crafting as well as help those working on ships or vehicles.

Details on crafting in the cities of Sigmar kicks off Cogs of Industry. What crafting is like in each realm is covered. In Aqshy for example wood and metal are used sparingly while glassware is famous for its strength. Crafting among the Free Peoples provides details on how technology is worked by the various Peoples. The Ironweld Arsenal works with humans and Duardin to expand defenses and provide effective weapons. Equipment along with rules for crafting gear rounds out the chapter. Options for various weapons, prosthetic limbs and wheelchairs, and more are detailed.

Alchemy gets its own background information, list of items, and crafting rules in Applied Alchemy. These options also include harvesting rare materials during an adventure which opens up ideas for the GM. Alchemy provides powerful effects like transforming into a beast or attacking with a fire bomb.

Dwarves get the next two chapters starting with Flames of Grimnir. Fyreslayers receive a history of their people and technology. The additional background is supported with new runes like Blazing Fury (bonus in melee) and an Endeavour to tame a Magmadroth with traits that can applied to the beast like Ash-Horn Ancient (Defence increase). New equipment follows and the chapter wraps with new invocations for followers of Grimnir.

The last chapter is Machines of War which brings vehicular manslaughter to Soulbound. In addition to vehicle operation and combat it includes stats on 15 machines (along with maps for some) like the Gyrocopter and Steam Tank. Honestly, the book is worth it for just this chapter alone. The sheer mayhem and violence a combat with even one vehicle in it will experience will really spice up a Soulbound campaign. And if multiple vehicles engage in conflict, the results will be explosive.

My favorite additions are the machines of war followed closely by alchemy. While the other chapters build on what has come before, vehicles and more alchemy not only break new ground but also are available to the widest range of PCs.

The rules for vehicle combat use the same rules as attacks against creatures which I think is a great decision. There are additions of course. For example, some vehicles take up multiple zones and each one takes more damage to destroy than a creature with that damage being tracked with a Fault Track. Rules also cover vehicle wrecks and chases. Of course, adding in new rules takes effort and the vehicle rules can be brought in slowly before a campaign careens into multi-vehicle death and destruction by starting out adding just one vehicle in a combat before having multiple ones on the battlefield.

Advanced combat covers things like targeting vehicle systems and how miracles, magic, and mystic effects work on vehicles. There are also heavy weapons that can crewed by two or more combat engineers. Overall, I’m impressed with how these rules build up from the normal combat rules and cover how other rules should interact with vehicles.

Steam and Steel includes helpful world building, fleshing out dwarves especially and giving even more details on the Free Peoples of the Cities of Sigmar. The Skaven are especially weird; Screaming Bells and Doomwheels express devotion to the Great Horned Rat quite succinctly. And if clusters of fleshless heads infused with necromantic magic sound amazing to you, you really need to get a Mortek Crawler.

Steam and Steel expands the worlds of Soulbound as well as the existing rules. It also adds brand new options for vehicle operation and combat which build on existing rules. If you like Soulbound then getting this rulebook will enhance what you are already doing. You can easily pick and choose what to add, learning the new options as you introduce each one to your campaign.
Click to expand...