RIFTS Is Coming To SAVAGE WORLDS!

Palladium Books has licensed its Rifts roleplaying game to Pinnacle Entertainment Group in order to produce a Savage World version of the Rifts RPG. There's no date yet announced. Rifts is a multi-genre post-apocalyptic game which dates back to 1990.

Palladium's weekly update contained the first hints of this information:
Something new and exciting. In an effort to truly expand Rifts® across the Megaverse®, in cooperation with Palladium Books, another role-playing game company is currently adapting the Rifts® Earth setting to that company’s RPG system of rules, as well as producing adventure sourcebooks. This is only the second time in Palladium’s history that an outside company will create new game material under a different set of rules. Rumor Squashing: No, Palladium is NOT going to stop publishing Rifts®, nor change to a completely different set of rules. Far from it. In fact, Palladium expects to release six new Rifts® titles in 2015 and 98% of all Rifts® titles are in stock and available for purchase right now! The idea is that by offering Rifts® via another game company’s set of popular rules it creates a parallel dimension of gaming enjoyment. An expanding Megaverse®, if you will. This is a bit of an experiment, but we are excited to see how it all unfolds.
​
And today PEG issued a press release:

Pinnacle released a mock cover, using art from Palladium’s 2005 Rifts Ultimate Edition with permission. The cover artist for the book was Scott Johnson.

“We are thrilled to follow up Kevin’s post with this announcement that we do, indeed, have the license to develop Rifts for Savage Worlds,” said Savage Worlds creator Shane Hensley. “We are early in the process, but anticipate having a core rulebook for the setting released in time for Christmas.”

The Palladium Books Weekly Update--April 19, 2015, written by Kevin Siembieda, recently made mention of a new roleplaying game system for the beloved setting:

“In an effort to truly expand Rifts® across the Megaverse®, in cooperation with Palladium Books, another role-playing game company is currently adapting the Rifts® Earth setting to that company’s RPG system of rules, as well as producing adventure sourcebooks.”

Rifts is an exciting multi-genre post-apocalypse game that began publishing in 1990. Featuring elements of everything from cyberpunk and fantasy to mecha and mythology, Rifts has always been Siembieda's vision of a game with everything for everyone, tied together with a strong narrative.

"I'm really excited to see what Rifts will look like in the Savage Worlds system," said Siembieda. "The Savage fans are great folks, and I think Rifts is going to be an amazing amount of fun for them, letting them explore all the possibilities of both the system and the setting."

Savage Worlds was created by Shane Lacy Hensley. Savage Worlds and the Pinnacle logo are all trademarks of Pinnacle Entertainment Group. For more information, visit www.peginc.com or contact Jodi Black, Marketing Manager for Pinnacle, at PEGJodi@gmail.com. More about Palladium and the Rifts setting can be found on their website here: http://www.palladiumbooks.com/.
​ 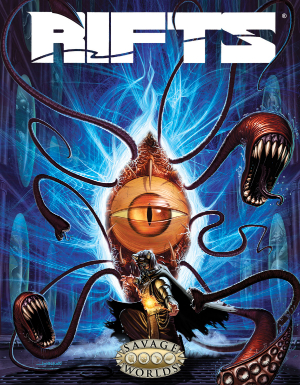 We love the Rifts lore, background, "multiverse potential", and every thing else about it. Er, well, uh, except for the system. Savage Worlds Rifts sounds exciting! Never played SW (but did play the original Deadlands for a few months, if that counts). When it comes out, me and my group will definitely give it a go.

Proud to be the Lead Designer and Writer on this, as Evil Beagle Games is working directly with Pinnacle and Palladium to bring this forward.

RIFTS was the first RPG I ever played. Loved the setting, loved the incredible amount of options. The system didn't bother me back then, but I would likely find it too arcane for my taste now.

I know nothing about the Savage Worlds system. Sell it to me

... is one of the most popular and well-supported game systems in the world these days, used to play in countless genres, settings, and styles. I've often described it as "80% of the flexibility of GURPS or Hero System, with only 20% of the complexity; an excellent trade-off!"

It leans towards a cinematic/pulp style of play, though it's easily dialed towards grittier or more over-the-top gaming.

The core mechanics are easily learned within the first round of a combat, and I know dozens of gamers who would never have considered running a game deciding to Game Master once they felt comfortable with SW.

I was happy focusing on just a few games. Now this?!?! Curses!
V

I see a lot of Heavy Armor/Weapons in your future padawan.

Von Ether said:
I see a lot of Heavy Armor/Weapons in your future padawan.
Click to expand...

True story - the day I first spoke to Clint Black on my mobile about pulling this together (I was in the car, driving away from Michigan, where I'd first gotten Kevin to say yes to the idea with nothing more than a handshake and a long-standing friendship to get it underway), we both immediately knew the solution to the M.D.C./S.D.C thing was simple - Heavy Armor and Heavy Weapons.

Of course, now I am looking at Heavy Toughness for supernatural creatures...

I am really looking forward to this. Rifts is a great setting and I think Savage Worlds will be an excellent fit.

Sean Patrick Fannon said:
It leans towards a cinematic/pulp style of play, though it's easily dialed towards grittier or more over-the-top gaming.
Click to expand...

One of my major concerns with Savage Worlds is that maybe things seem a little too cinematic and action-y. One of my favorite things about Rifts is that it tells you exactly how things work, keeping abstraction to a minimum.

I am tentatively looking forward to seeing how this works out. My big fear is that the old-school flavor won't shine through, and the simulation-y feel of Rifts will get buried under some new-age narrative-y agenda from Savage Worlds. (My hope is that it might produce a game of Rifts that remains true to the tone of the original mechanics, but is sufficiently stream-lined to be actually playable.)

Not sure if anyone heard that loud "thud". That was my jaw dropping

There will be crunch in the works, I assure you, though I will defer simulation for playability every time.

I hope this does well enough that we see the partnership extend to some of Palladium's other games. Beyond the Supernatural and especially Nightbane are my hopes.

Sean Patrick Fannon said:
There will be crunch in the works, I assure you, though I will defer simulation for playability every time.
Click to expand...

There are times where you must sacrifice simulation in order to make a playable game, and that is a lesson from which Rifts could definitely benefit, but it is also possible to go too far - to make too many concessions for playability - and lose sight of the original goal.

I'll be looking forward to previews, but I'm not sold yet. This could be huge.

(Okay, I probably am sold on it already. The execution will determine whether I wait for the book to go on sale, just so I can read it, or whether I'll buy it ASAP so I can immediately start running a campaign with it.)

I have not looked much at Savage Worlds, but I like the Rifts setting - And Sean you wrote some of my favorite HERO books. I'll be getting this.
C

Please tell me you're going to maintain the lack of balance between races and occupations and allow characters to start at widely variable power levels. Or in other words, can my players form a party consisting of: A knight of the Cosmic Forge, A demigod, A dragon hatchling, a city rat and a glitterboy, and expect the two gonzo classes at the front to be, well gonzo in terms of power but still (with a skilled GM) be able to work with something lower powered like a city rat and a glitterboy (not every day that you get to say a glitterboy is "low" power).

Awesome! I love the Rifts setting. The rules... eh, not so much. I'm totally be looking forward to this.
A

That's actually really cool and so far out of left field had it been posted earlier in the month I'd have figured it was a belayed April Fools joke.

And SPF, congratulations on being lead. SW isn't my cuppa for various reasons mainly as I can't get it to click but I've seen enough of your work to know you'll do a great job.

Also to those who haven't tried the system, you can get the test drive here https://www.peginc.com/freebies/SWcore/TD06.pdf

I highly recommend anyone who hasn't give it a whirl , SW does everything it claims right out the box and has huge support, it is a great game.
P

This is very cool, I have like the RIFTS setting for a long time just have a large amount of dislike for the system mechanics.