Root: The Roleplaying Game Core Rulebook from Magpie Games is available for your gaming table. Based on Leder Games immensely popular board game, Root: A Game of Woodland Might and Right, this tabletop RPG conversion kickstarted in September/October, 2019 and reached 6,495 backers who pledged $602,022. This book not only offers a recognizable property, it also demonstrates how Magpie handles much beloved properties. That’s important when you think about one of their upcoming offerings, translating Avatar: The Last Airbender to a tabletop RPG. This property gives a clear view of how they’ll convert a major IP, one so popular, it became the highest funding RPG Kickstarter of all time. 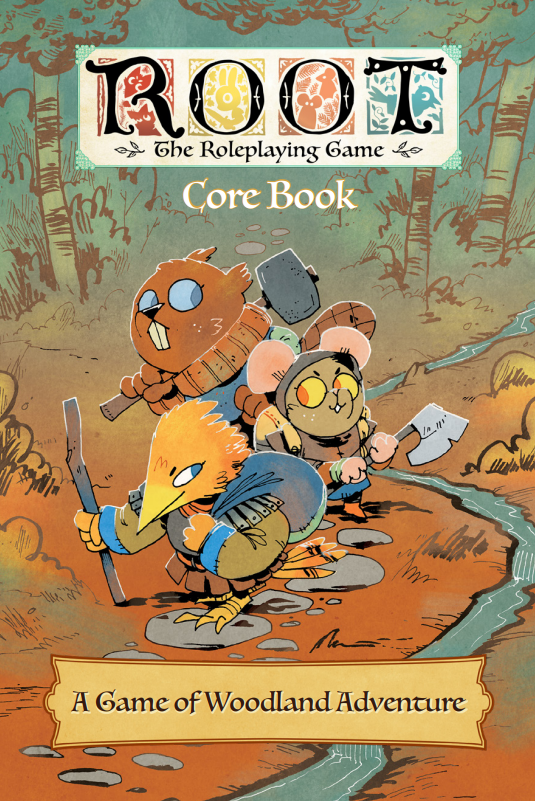 An anthropomorphic animal fantasy world made popular in the board game series. In either version of the game, you’re a part of The Woodland, a resource rich, factionalized forest in a state of war. Enter your characters, the vagabonds, adventurers that owe no allegiance other than to their coin purse. You’ll take the jobs that no faction cares to do as you move between the different groups, trying to find your place along the edges of each collective. Working for some, stealing from others, you’ll do the work that other animals will not.

The concept sounds dark. Before you judge, let’s talk about the game’s art, its glorious, cartoony art. The artwork deserves attention because it provides so much visual context and sets the tone as much as the backstory does. Kyle Ferrin’s art is one of the reasons this property is iconic. Executed as a cheerful mix of cartoony, lightly CalArts line work combined with beautiful flat colors that blend into subtle color gradients; Kyle’s artwork and color palette are simple yet unsurpassed in effect. Amalgamated, these animal caricatures have some bite as they sport a mischievous undertone that says these animals are cute, but they’re beasts and ready to defend their homes. To my eye, this is probably the secret weapon that launched Root into the stratosphere of great board games and RPGs. Not to take away from the setting or mechanics, but Kyle’s work pops and can’t be understated. 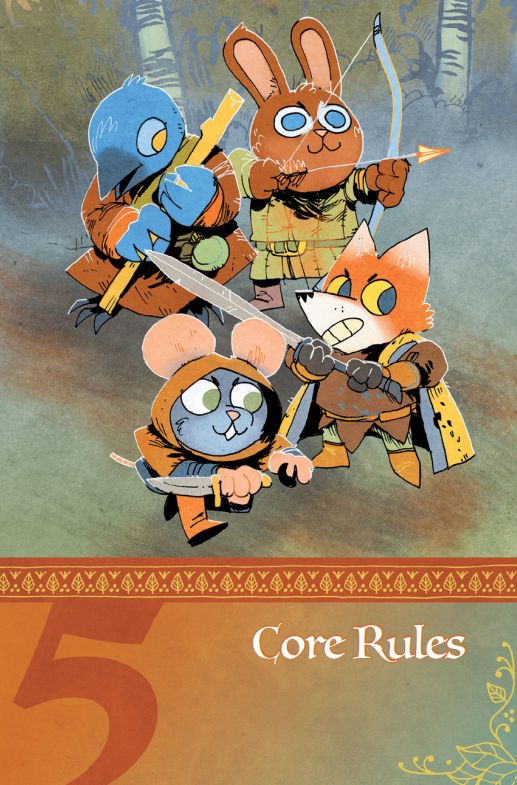 For the writing, the clever keyboards of Brendan Conway along with Mark Diaz Truman and Sarah Doom brought this RPG to life. Their work is a master course in retaining the atmosphere and narrative of the source material while successfully converting the whole into an RPG. Among the elements that they utilized from the board game are the factions that fought The Grand Civil War. The Eyrie Dynasties are the former bird rulers of The Woodland. The Marquisate under the Marquise de Cat are the foreign invaders. Both sides are opposed by The Woodland Alliance, the largest force determined to keep their land free of cat or bird domination. The other smaller factions are also taken from the boad game: The Denizens, The Lizard Cult, The Riverfolk Company, The Great Underground Duchy, and more. The core book provides a multi-page history of the setting to draw inspiration from.

This RPG uses a variant of the Powered by the Apocalypse system. What is the Powered by the Apocalypse (PbtA) system? It’s a rules lite engine that prioritizes story and twists as highly as combat moves. Most PbtA RPGs have a section in the core rulebook that explains the theory behind how this type of RPG works. Its goal is always moving the story in a new and unplanned direction. Forget hit point reduction, counting gold pieces, and arguments over XP, PbtA games focus on the fiction of the story and playing to see what will happen next. 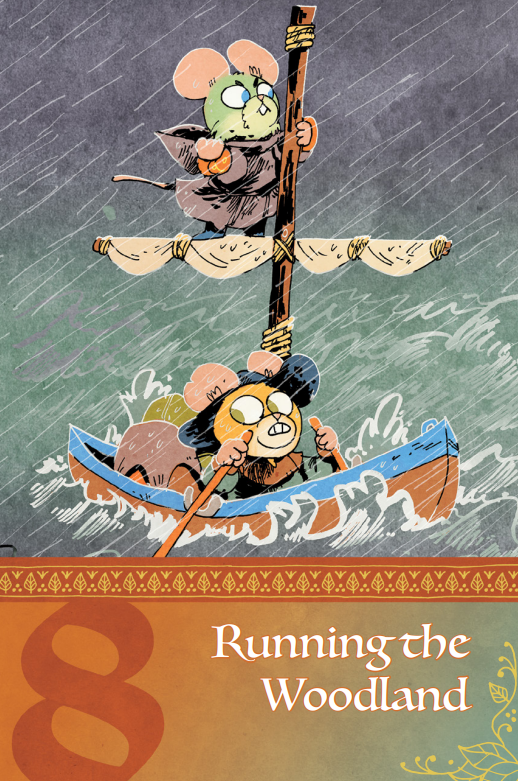 Mechanically, moves are how this system expresses actions. Everything the players, the GM, or the setting does are called moves of one sort or another. There are character moves, basic moves, weapon moves, reputation moves, travel moves, GM moves, and session moves, each used to advance the adventure. Rolling 2d6 plus a Stat modifier, players compare the results against a static chart. 10 and above means you succeed completely. 7 to 9 gives you success, but at the cost of a complication. A 6 or less gives the GM a move which is meant to complicate the situation for the layers. The 2d6 bell curve means a lot of success at a cost results, which enhances the narrative.

Like most PbtA RPGs, this one used playbooks. These four-page documents detail different aspects of the character from appearance to roleplaying to their bonds with the other characters and their moves. The core rulebook contains nine playbooks, each with a suggested creature and stats (Charm, Cunning, Finesse, Luck, and Might). If you’re looking for more character options, there’s an expansion coming with ten more playbooks. 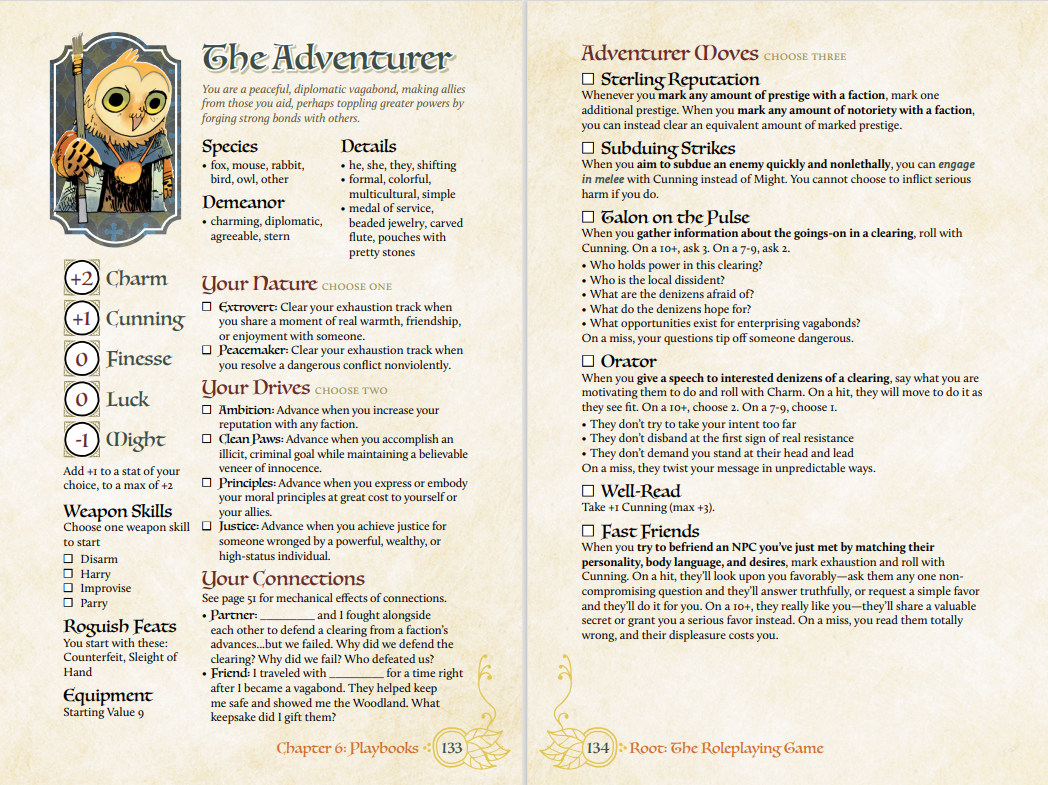 For the story, you’ll create The Woodland, tailoring it to the start of the narrative. The rules allow the world to grow and evolve in response to the characters’ actions. The book has rules to create your own Woodland and rules to populate it with factions and NPCs. In the core rulebook, you’ll have options for the Marquisate, the Eyrie, and the Woodland Alliance while other factions are available through the Travelers & Outsiders book.

You have an idea of the setting, art, and system, but how does it play? In the game, you’re a vagabond adventurer with jobs as varied as you can imagine. Rescuing a cat from a tree might mean you’ve been hired to go to one of the Eyrie Dynasties’ tree bases, home of the bird folk, to rescue one of the Marquisate’s cat folk, or it might be a literal job to go get a cat out of a tree. Your vagabonds could be tasked with stealing a nation’s treasure or exploring a new cave. Want to invent a flying machine? Have at it. The possibilities are wide open as long as there’s a denizen of The Woodland willing to hire the job done. Your characters exist within this world, but they’re important. What they do doesn’t just affect them, but the wider Woodlands respond to their decisions. At first, those choices will be small. But as their reputation grows, their moves will have larger and larger ripples. Factions will know the vagabonds, denizens will make way for them, and their moves will play a role in the future of the whole Woodland.

In an RPG about war and the potential for violence, there needs to be a discussion about player safety. The core rulebook does an excellent job of providing a solid overview of the options GMs might use to ensure player’s are cared for. When you join in a game, there’s an unspoken social contract that reads, everyone should have a good time. Root includes some guidance to help ensure that contract is fulfilled.

The book is 256 pages plus the cover, but is it enough to run a campaign of Root: The Roleplaying Game? The core rulebook explains the setting, the history, the characters, some of their motives while leaving room for player interpretation, the rules, how to safely utilize those rules, and what to expect from start to end of a session or campaign. Combined with the artwork, every bit of foundation is present allowing your gaming table to adventure in a customized, fun world. 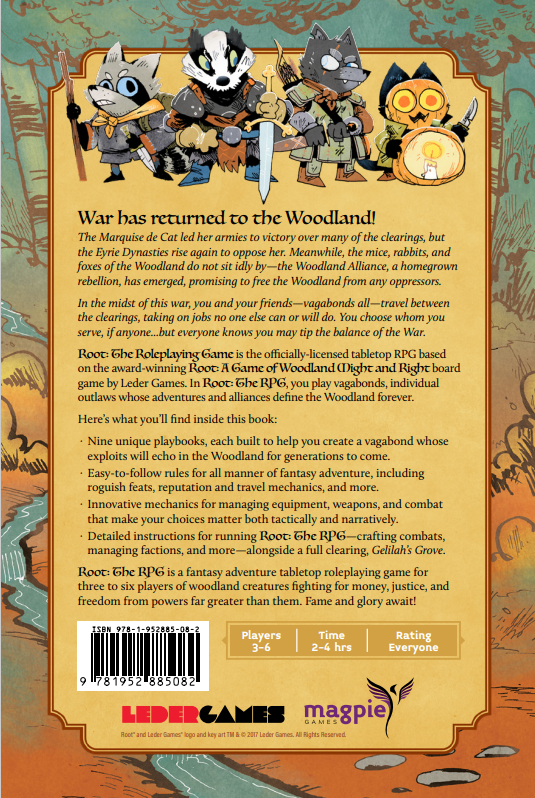 Should You Buy It?​

How good is Magpie Games’ interpretation of the PbtA system? Good enough that they offer design classes on the system. They’re first rate designers and, in my opinion, their work rates alongside the original PbtA creators, Meguey and Vincent Baker. If you’re interested in seeing what Magpie’s interpretation of a cartoony world looks like before they drop Avatar Legends then I highly recommend this. It’s a good baseline to consider their level of quality. (Though, Root and Avatar are two different worlds and one-to-one comparisons are bound to be flawed. Still, this RPG gives an idea of Magpie’s attention to detail.)

Should you play Root: The Roleplaying Game Core Rulebook from Magpie Games? If your gaming table is a fan of the Root board game, this is going to go over. If you’re a fan of fantasy worlds populated by anthropomorphic animals engaged in weighty struggles, this is worth playing, no doubt. If you’re into anthropomorphic animals, fantasy, and making your mark on an evolving world, Root: The Roleplaying Game Core Rulebook is worth adding to your gaming library.

Want to try before you buy? Check out their free quickstarts at DriveThruRPG or head over to the Magpie Games’ website.

The tabletop game is one of my favorites and I fully agree that the art has a very huge part in the game's success (at least in getting it picked up the shelves). I didn't back the Kickstarter but I've been keeping an eye on it. I'm a bit torn, because I have little interest in PbtA system, but I'm absolutely enchanted by the setting of Root.

Can’t wait til my KS is fulfilled! So hyped.

I swear to God I looked at the title and thought someone made an RPG based on the 1977 miniseries.

Wonder how this compares to the Humblewood stuff. I've only read a brief synopsis of that, it also involves animal characters.

beta-ray said:
Wonder how this compares to the Humblewood stuff. I've only read a brief synopsis of that, it also involves animal characters.
Click to expand...

Emirikol Prime said:
One is 5E and one is a modified Powered by the Apocalypse
Click to expand...

Thanks. I understand that part, just wondering how the world is set, how flexible they are compared to one another, etc.

beta-ray said:
Wonder how this compares to the Humblewood stuff. I've only read a brief synopsis of that, it also involves animal characters.
Click to expand...

I did a Let's Read of Humblewood on RPG.net here: [Let's Read] Humblewood. Humblewood is more of an adventure campaign than setting, but I think it has faults in both places.

Am I right in assuming the Root RPG isn't really geared toward small children?

masshysteria said:
Am I right in assuming the Root RPG isn't really geared toward small children?
Click to expand...


None of them are, including Mouse Guard. Which is a bummer because I’m really looking for a great anthropomorphic RPG right in a sweet spot between simplistic/complex and between too fluffy/too dark. Can’t find it. The ones meant for kids also (in my opinion) underestimate them.