This article looks at RPG crowdfunding projects ending between December 13th to the 19th. As is normal for the end of the year, there are fewer projects with eleven in this article versus over double that number in the months leading up to the holiday season. As we close out the year, GameOnTabletop is picking up more RPG projects like Vast Kaviya, Of Dreams and Magic 2nd Edition, and Torg Cyberpapacy, which could be interpreted as the site developing a larger RPG following. 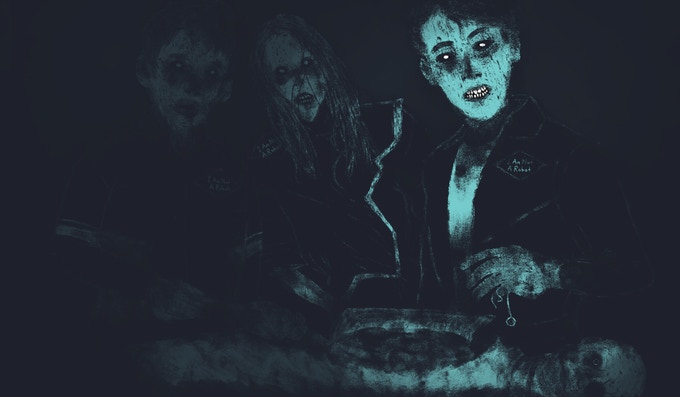 “A brand-new zine-sized module for the Mothership Sci-Fi horror RPG. Androids, AI, memory, and existential horror abound. Gradient Descent is a sprawling sci-fi megadungeon for the ENnie Award-winning Mothership Sci-Fi Horror RPG set in an abandoned android production factory run by a powerful AI. The factory, known as the Cloudbank Synthetics Production Facility, may be abandoned, but it's far from uninhabited. Its cramped corridors and dark chambers are populated with androids designed by ASAMM to be so advanced that they are often indistinguishable from humans. Because of this, the factory has been blockaded by a fleet of volunteer corporate vessels who have instructions to kill anything that enters or leaves Cloudbank, otherwise known as: The Deep. The Cloudbank was coined The Deep by a community of scavengers who camp on the outskirts of the blockade. They call themselves Divers, and their fascination with the strange androids and creations found inside The Deep keeps them coming back. Sometimes to their own detriment. More than one diver has fallen prey to the Bends, a terrible condition where due to the continuous exposure to The Deep's mysteries the Diver forgets whether they are human or not and abandons their friends and loved ones to live in The Deep for the rest of their lives as the android they truly believe they are. That's why the Divers have a saying, "No matter what they say, you never leave anyone behind in The Deep."
Click to expand...

OF DREAMS AND MAGIC 2ND EDITION: THE WAKING WORLD by ODAM Publishing

“The Waking World is the second edition of the tabletop RPG Of Dreams and Magic. The Waking World is about living in a world where anything is possible. When playing The Waking World, you will assume the role of Anima, magic wielders capable of making their Dreams real. Chief among their abilities is the Animus - the dream-self. They can take on the form and abilities of their Animus in the real world, whether their Animus is a wizard, space marine, or kleptomaniac ninja. Anima use their powers to battle the Doubt, which turns their nightmares into Reavers. Horrible creatures from the depths of the human subconscious, Reavers torment Anima, targeting their loved ones, their goals, their jobs, and their lives, all to convince the Anima to give up their dreams, surrender their magic, and submit to its version of “reality.” With a bit of Conviction and trustworthy friends, an Anima might survive, or even thrive in the middle of this war they didn’t sign up for.”
Click to expand... 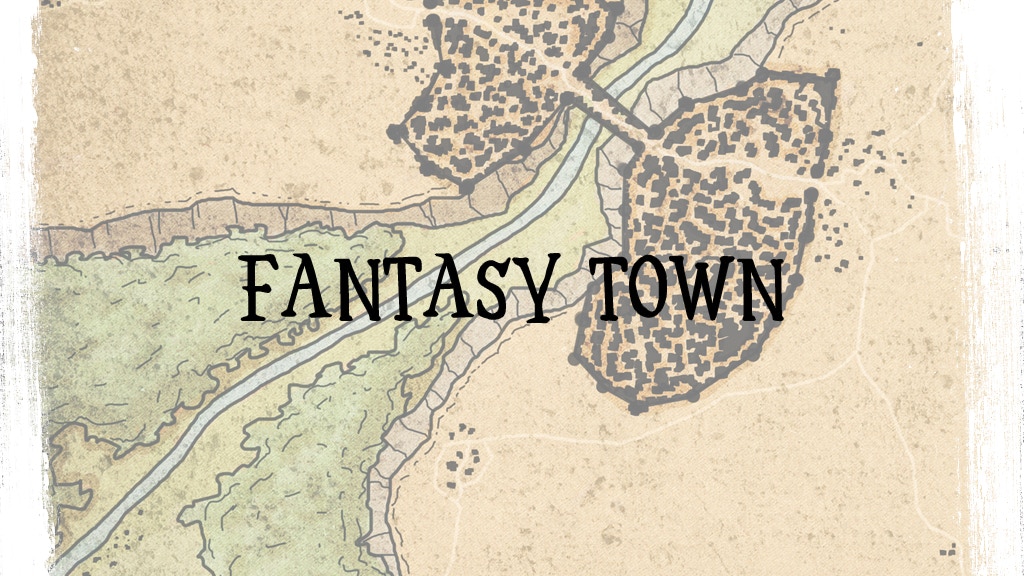 A Fantasy Town: A System-Neutral Setting for Fantasy Games by Rogue Games, Inc.

“A crowdfunded and crowdsourced fantasy setting, featuring your input and your characters. Each location in the setting will include information on the building, the NPCs who work/live there, and random charts for seeding the environment with rumors, stories, plots, and so on. A toolbox filled with a plethora of useful goodies. That's right. We said plethora. This is about exploration into the realm of design and world-building. Backers have the chance to look behind the curtain of how we make a book while helping us answer key questions on the design. Backers have the opportunity to name NPCs, and place their own characters (or themselves) into the world.”
Click to expand... 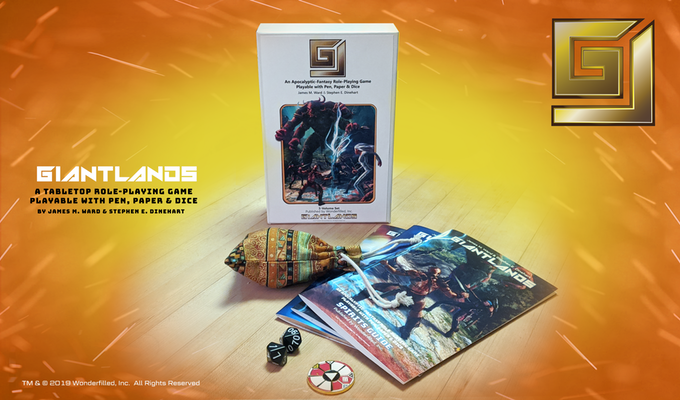 “GiantLands is a new kind of tabletop role-playing game made with classic talent and new blood here in Wisconsin the birthplace of TSR and "Dungeons & Dragons", published by Wonderfilled, Inc. The creation of legendary game designer James M. Ward, whose first D&D book "God, Demi-Gods & Heroes" was a supplement to E. Gary Gygax's original "Dungeons & Dragons" famed white box and me, Stephen E. Dinehart, professional game designer, writer and attraction designer for theme parks like Universal's "Super Nintendo World" and "Evermore Park". Additional team members include classic TSR talent like Ernie Gary Gygax Jr., Kimber Eastland, Jeff Leason and, Larry Elmore, but we need your help to make it a reality, and keep building the team. My dream? To reunite a crew of the talent that made the favorite games of my youth and create a new kind of game, one that blends live-action, classic role-play and theme parks to produce a new breed of experience. While the game is still in the midst of an iterative development process, I thought it would be great fun to offer up a edition zero boxed-set, handmade, much like the original 1000 copy run of Dungeons & Dragons Gary Gygax and Dave Arneson used to launch the original game. Much like that original boxed-set, this is the game in the raw, unpolished, rough and hand assembled by yours truly with love right here in Wisconsin, the birthplace of a product and movement that has since changed the world and so many of our lives. This homage is created in the hopes of doing the same with my own GiantLands.”
Click to expand... 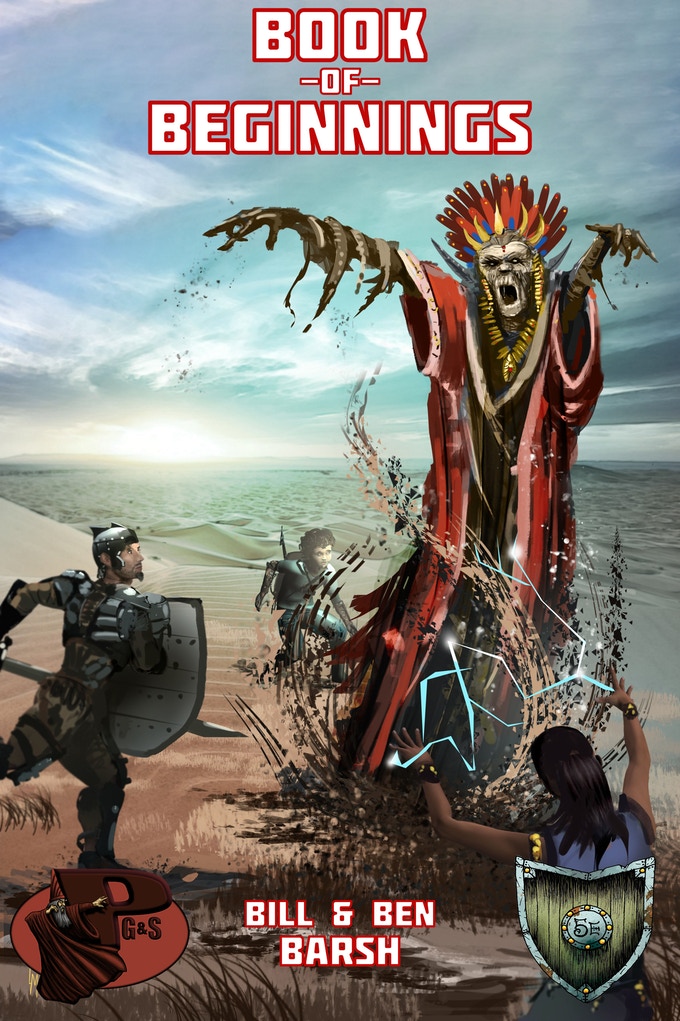 Book of Beginnings for 5th Edition! by Pacesetter Games & Simulations

“10 epic adventure paths for kicking off your 5th Edition campaign! There are four for 1st Level, four for 3rd Level, [and] two for 5th Level. These adventures are meant to be played in 1-2 sessions of around 4 hours each. Each one will be fully illustrated and given a corresponding map. Monster stats are included, so no need to open up those rule books! The book is estimated to be between 48 and 64 pages. These adventures are written by Bill and Ben Barsh, the father and son duo of Pacesetter."
Click to expand... 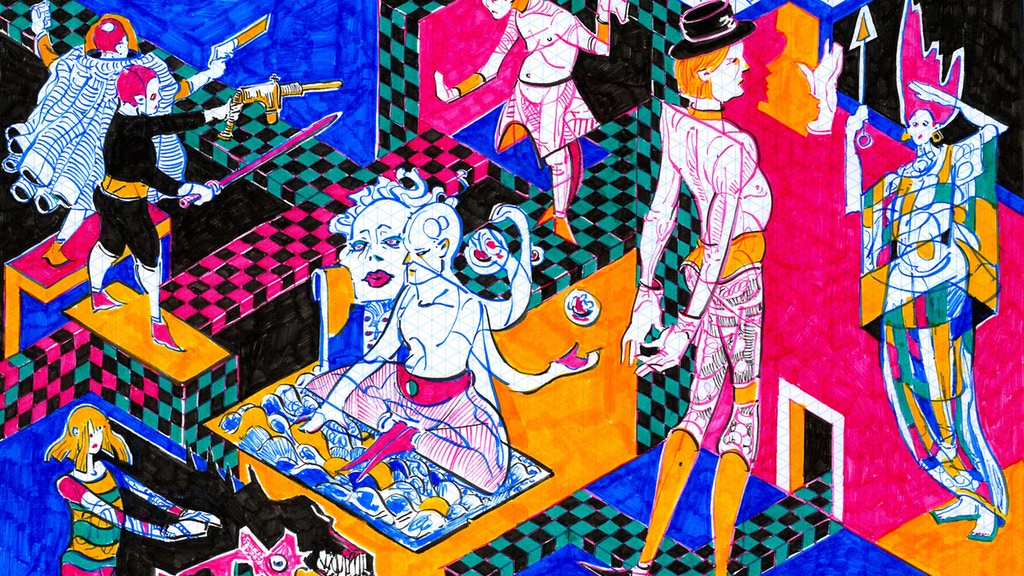 “The RPG Zine Trilogy. Three zines, full of maps, creatures, playable classes, and loot, with self-contained rules compatible with Into the Odd. SUPER BLOOD HARVEST #1: You've been abducted by a VAMPIRE SPACE FORTRESS--escape before it enters hibernation behind the moon! (32 pages) SUPER BLOOD HARVEST #2: You wake amid wreckage on the surface of the moon, at the foot of an abandoned temple. (44 pages) SUPER BLOOD HARVEST #3: You are the last free humans of Mars, fugitives from hostile killbot swarms. A tile-crawl sandbox ruled by city-sized mechanical gods. (~70 pages)”
Click to expand... 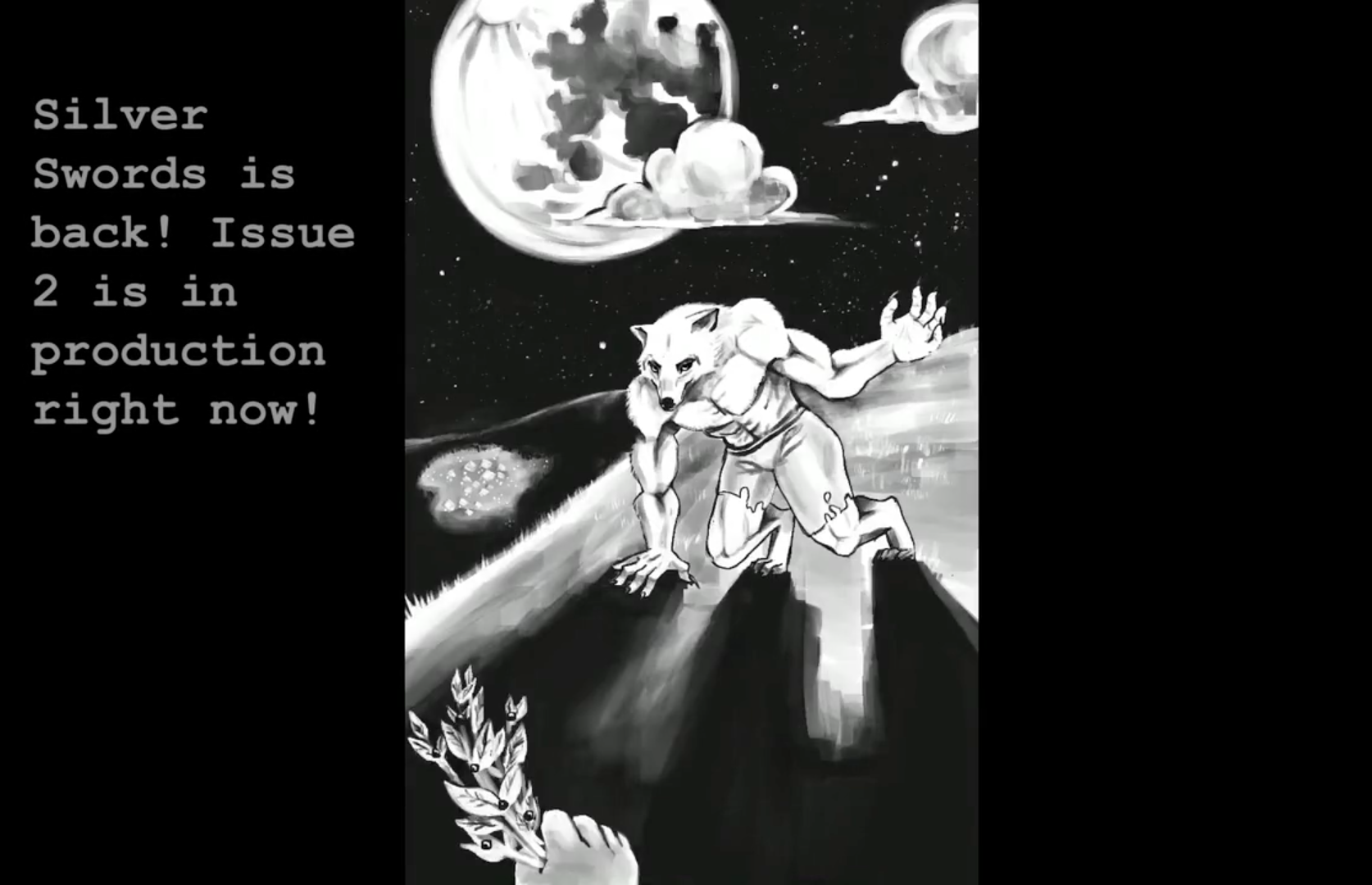 “The second issue of the Silver Swords RPG fanzine! [W]e are finally ready to announce the second issue of Silver Swords magazine! The content of the zine will be made up of OSR and 5e related content. This edition will include both old and new authors with many fresh ideas for your RPG experiences! We will also be including some comics and maps with this issue, so if that's what you want, then look no further! Issue 2 is currently in production and is looking to have about 32 pages. The zine itself is 5.5 inches by 8.5 inches in size and will be printed in black and white.”
Click to expand... 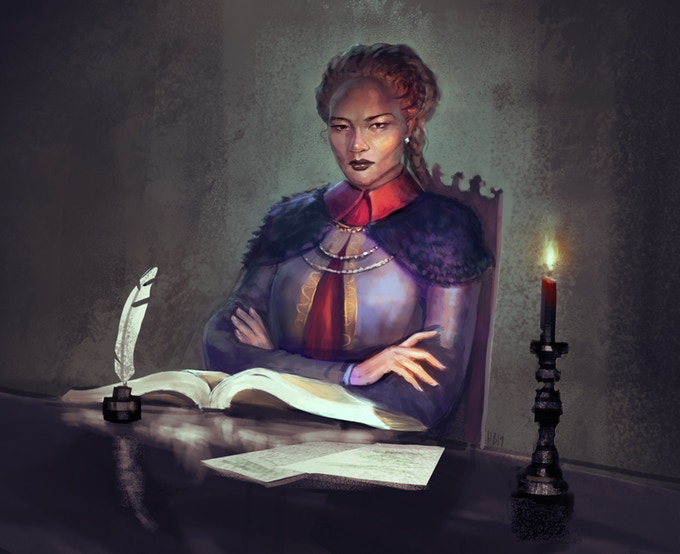 “A campaign for Pathfinder D20 game system, set in a rich world full of nefarious plots, heroic opportunities and dark fantasy adventure. Ennervain is a dark fantasy world which explores themes of imperialism, subterfuge, war, and madness, but above all engages your heroic imagination to overcome these things! Ennervain combines adventure, philosophy, art, gameplay and rich storytelling to create a deeply immersive experience that places you as the protagonist trying to save a world turning towards hate and madness."
Click to expand... 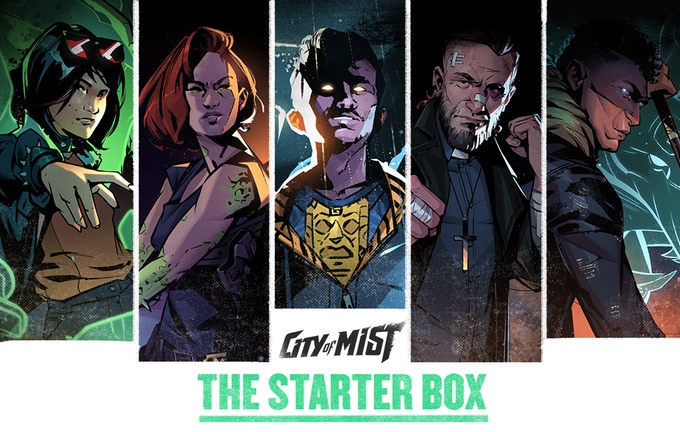 City of Mist RPG: The Starter Box by Son of Oak Game Studio

“A starter game in the gritty cinematic universe of City of Mist, where myths and legends become comic book detectives and vigilantes. City of Mist is a multi-award-winning tabletop roleplaying game where you play modern-day incarnations of myths and legends. Its cinematic flair and story-first, tag-based game system have been widely acclaimed, making it a favorite among new and veteran roleplayers all over the world. In the game's eponymous City, people with legendary powers are hidden from the population at large. You and your friends will play a ragtag crew of ordinary individuals wielding legendary powers who investigate a City full of mysteries, crime, magic, and corruption to get to the truth. It will be a detective story, borrowing heavily from film noir, with a lot of personal drama, self-discovery and sacrifice, and thrilling, ubran, super-powered action. Are you ready to hit the streets? The City of Mist Starter Box is a "learn-as-you-play" introduction to the world and rules of City of Mist. You will play one of five anti-heroes with legendary abilities – the crew of the "All-Seeing Eye Investigations" agency – as they fight to free their neighborhood of Miller's Square from the grip of a mythic-powered mafia organization, in a full-length introductory case: Shark Tank.”
Click to expand...

VAST KAVIYA by Mike Myler
NOTE: This article includes affiliate links to DriveThruRPG. As a DriveThruRPG Affiliate I earn from qualifying purchases.
Click to expand... 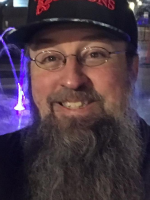 My Gen Con 2022 look!
If you spot me at Gen Con, ask about a physical copy of HUMAN… ALMOST. If I have any left, it’s yours (or grab the free PDF version at DriveThruRPG and Itch.io).

I haven't play City of Mist but wow it sounds very interesting!

It's a noir investigation game, with ideas straight from Zelazny's novels with a very well thought out mechanics.