We've had a lot of looks at how various games are ranking over the months and years. We looks at stats from the largest virtual tabletops, we look at levels of conversation, and we look at ICv2's quarterly surveys. They've all said pretty much the same thing. However, it's also possible to look at anecdotal information on an individual basis, and this short report from Black Diamond Games, a store in Concord, California, may help contextualize some of this aggregate data.

​
Back Diamond Games posted a blog post yesterday in which it reported on what was selling well in their store. You can read the post itself, but here's a quick summary; bear in mind this is one store, not a worldwide survey:


UPDATED: These figures refer to dollars, not units or customers. Thanks to @brotherbaldric who asked them! 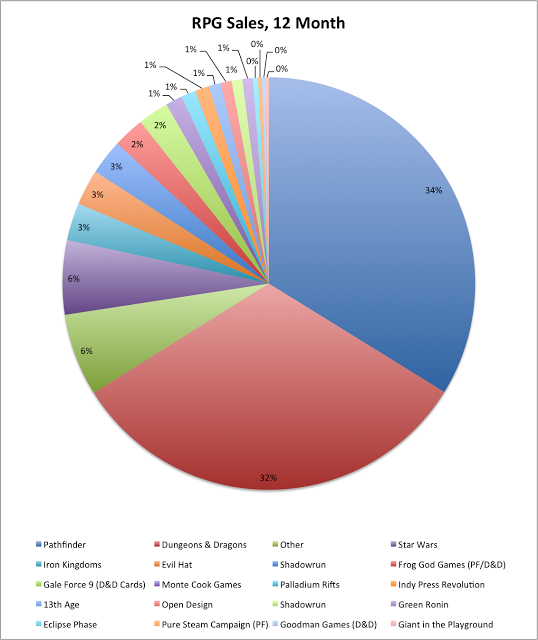 ​
For those who prefer lists to pie charts, here's it broken down:


*I assume this involves some rounding, and that the figures aren't actually zero.

D&D has barely been out a year, I predict their slice will grow considerably in the next 12-18 months, particularly with non-official OGL stuff being released now.

Staff member
Interesting, so long as you remember that this is taken from one store - so one geographical area, with it's own distribution of players in its market.

The general form is the most interesting bit - a couple of leaders, followed by a long tail of smaller sellers. It puts a store in a tough spot, when 30% or 40% of revenue come from 18 different lines. That's too much to do without, but it takes up lots of rather expensive shelf space.

This actually means that way more people are buying D&D than are buying Pathfinder because D&D has released only a tiny percentage of product compared to Paizo's release schedule.

Mad Zagyg said:
This actually means that way more people are buying D&D than are buying Pathfinder because D&D has released only a tiny percentage of product compared to Paizo's release schedule.
Click to expand...


Conversely it could mean that people are buying twice as many Pathfinder products because they tend to have half the pricepoint.

Actually though, all it means is that at one major hobby store they are both selling about equally when it comes to that stores profit.

I always appreciate Gary Ray's insights into his store's market.

One thing he pointed out a while back is that 5e is selling more efficiently than Pathfinder is. They are both selling in similar numbers, but 5e does it with only 9 products. (Which is what I think Mad Zagyg could have pointed out and been entirely correct). Gary also pointed out in that same post, however, that we are much further into Pathfinder's life-cycle than 5e and he implies, I think, that Pathfinder's longevity in sells at this point is rather remarkable considering the same number of years applied to a DnD edition run.

A point I would make, is that while some fault Paizo for putting out too much product, it seems certain that their gaming/business model has worked to sustain their product.

AQuestion to ponder in this race is: which company is the tortoise and which is the hare? Is slow and steady represented best by slow product release, or by sustained sales over a longer period of time?

Staff member
UPDATED: These figures refer to dollars, not units or customers. Thanks to brotherbaldric who asked them!

Even though adventures sell much worse than core books, they have an affect on the sales volume for the core if they aren't there. Seeing a bunch of adventures available for a system makes consumers much more confident in the core system.

smiteworks said:
Even though adventures sell much worse than core books, they have an affect on the sales volume for the core if they aren't there. Seeing a bunch of adventures available for a system makes consumers much more confident in the core system.
Click to expand...

The adventures, also, even though smaller movers, do themselves move additional product beyond themselves as they tend to encourage, by their very nature, interest in other aspects of the game. Thus adventure a may only sell x number, but for each x, there is x+y more sold because of that one adventure being sold. At least, that's partly my theory. If x wasn't sold, then x+y would also not be sold, and you would be left with some smaller number of sales.

Since it's comparing dollar sales, I'm not surprised to see PF up slightly, they have more stuff to sell. For D&D to be right behind and only 6 or so books out there is a good thing as it shows what is out there is selling well.

I'd love to see an ICv2 questionnaire to see if they ask about dollars or unites when it comes to sells of a brand.

chibi graz'zt said:
D&D has barely been out a year, I predict their slice will grow considerably in the next 12-18 months, particularly with non-official OGL stuff being released now.
Click to expand...

Conversely, you could say that after a year the hype of a new edition will go and sells will follow.

In the next few weeks (if not next week), we'll probably get the new ICv2 RPG ranking for the last trimester*. It will be interesting to see how D&D did with no new RPG books released during those four months.


*ICv2 has been doing trimesters instead of quarter reports since 2013.

I'm going with D&D still in first BUT I could see it slipping based on the reason you mention of the gap between PoA and RoD books.

I think that the reason adventures sell less is that the potential market is approximately the ratio of GMs/(GMs + Players) for a given system. Further limited by if there are 2 lvl 3 adventures for sale, a given GM will likely only buy 1. I do think that ready to run adventures do help overall sales for a system since it gives potential new GMs an easier place to start.

Another reason PF sales seem to hold up well may be a perception by customers that the current version will be around for a while longer. WOTC has a history of version churn every 3-6 years. Except for the 3.5 version, each version of D&D was enough different from the previous version that most players felt the need to do a complete replacement of their books. A few years into a D&D release, the question becomes how long will my purchase be useful?

I agree about Pathfinders sustained viability. The firm foundation is, IMHO, supporting their sales.

Also Paizo sells things that support many other RPGs like their flipmats and initiative boards. I'd like to see a breakout of that.

Would have loved to see their numbers for RPG products vs non RPG products. But I'd imagine it matches, fairly closely, with the continent wide (US/Canada) trend that RPG products only make up between 6-10% of overall tabletop gaming sales.

Unless of course, they're a pure RPG store (not many of those around these days).

I'm just delighted at Open Design--better known as Kobold Press---shows up as 1% of total RPG sales! That's great for a 3PP.

Really curious about the third-party publisher info; that Pathfinder 3PPs are barely selling, but basically the same products by the same publishers sell for 5E.

For instance, on the Kobold Press site, all their Pathfinder products have been released for 5E as well. Be very interesting to see how the sales compare between those two sets of products.

Well, I wouldn't say that ALL the Kobold Press releases have been released for 5E as well, but many have recently. Midgard Heroes, Southlands Heroes, Raven's Call, and the Tome of Beasts are the big ones.

It's certainly true that Pathfinder players have a much longer shelf of materials available--the PFRPG has been around for many more years (since 2009 or 2000, depending on how you take the "3.5 thrives" statement from Paizo). My suspicion is that Pathfinder players have a lot of the game materials they want; the hardcore players are still buying and are playing PFS, and plan to continue playing what they love.

With such an overwhelming variety of 1PP books and options, though, it seems less likely that a Pathfinder player will pick up a 3PP title unless he or she is looking for a real change of pace.

They're different audiences, in other words, and the 5E audience has less material to draw on.

RPGs in Japan, one store's perspective