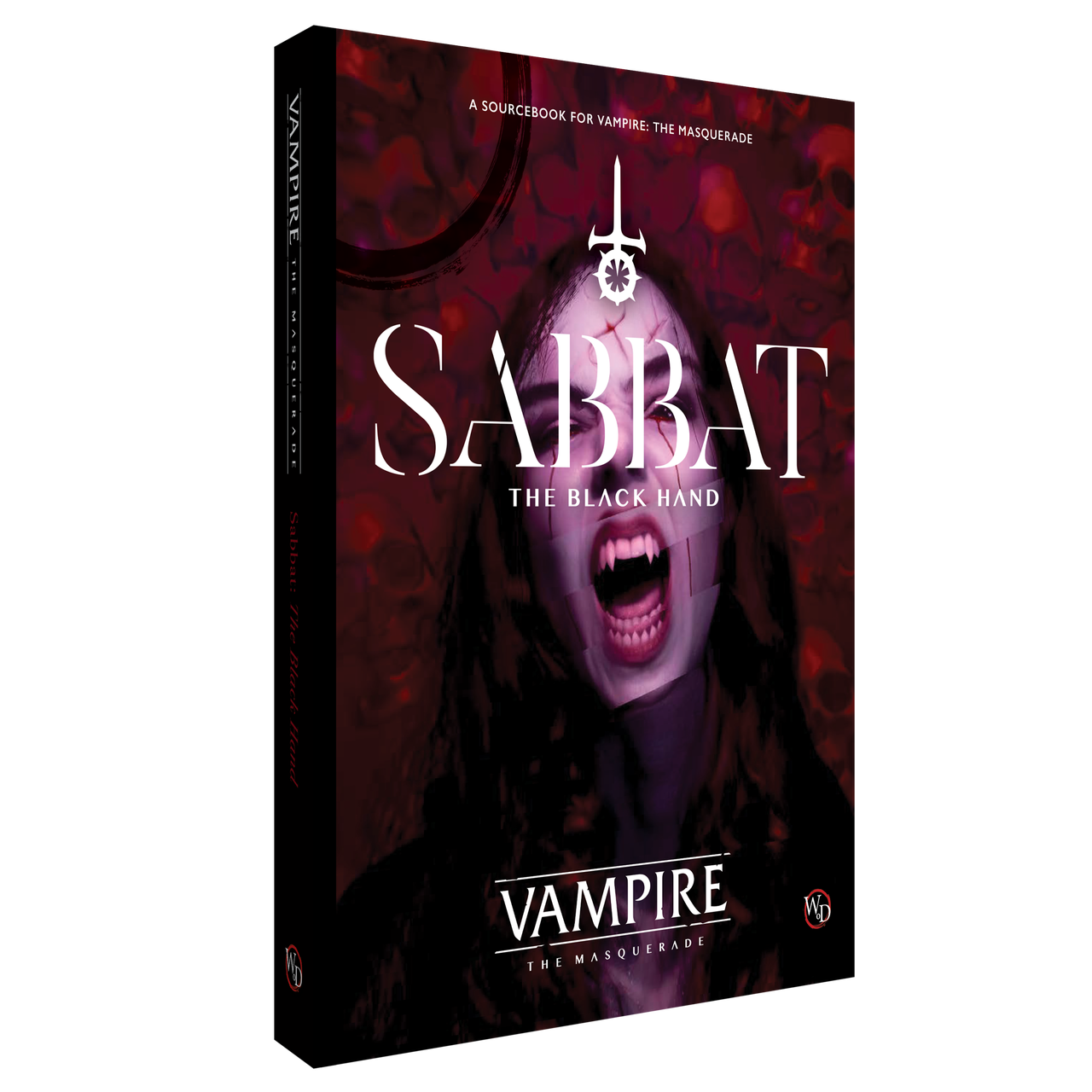 When Vampire: The Masquerade Fifth Edition made sweeping changes to the setting on its release, the sect of the Sabbat were swept right off the table. The political focus reshifted to a struggle between the Camarilla and Anarchs in every domain. Vague rumors of Sabbat cities being abandoned and many of their members being called to fight in battles against awakening elder vampires were enough for the core book. Players have waited three years for the answers, and Sabbat: The Black Hand delivers a few while showing just how much the Sabbat has changed in the post-millennial World of Darkness. Come with me as I read the review copy provided by Renegade Game Studios to shed some light on this very dark corner.

The current Sabbat is less of a dark mirror of the Camarilla and more like a cell-based conspiracy. The Sabbat was hit hard by the Second Inquisition as well as the Beckoning that affected older vampires. These narrative moments push the Sabbat back to something closer to its beginnings in first edition: nomadic Near Dark-style packs wandering from city to city raising Hell while laughing at concerns about holding onto humanity. They’ve also been more directly connected with The Book of Nod which is framed more as a heretical text in this edition than the sort of thing every Kindred keeps in their coffinside nightstand. Sabbat packs believe that Caine will awaken to take his revenge on his wayward children and they are his instruments of vengeance.

The organization has reformed around the Path, which in earlier editions was the alternate to Humanity that Sabbat characters had to use to not descend into degenerate monsterhood. Here, they frame how a pack views their unholy duty. The Path of Caine, for example, advocates drinking as much vampire blood as possible to celebrate it as a gift from their master. The Path of Death and The Soul is about stealing power over death from the hated Antediluvians. These short write ups helped me understand the Paths better than anything else I’ve read about them in any edition of the game. Without having a laundry list of sins to worry about, the writers focus on what vampires on these paths do, rather than what they don’t.

The section on antitribu terminology claims that it was all a PR stunt to shake up other vampires. The Sabbat doesn’t really care about being the Bizarro versions of their clan identities. The pack comes first, reinforced by the Path philosophy of the priest and the strange version of the group Blood Bond called the Vaulderie. Even Kindred is replaced with Cainite throughout the book with the implication that Kindred is a soft, contemptible term. These are pretty big changes to the Sabbat but they are pretty clear and pretty sharp.

I much preferred Onyx Path’s simple layout in their books to the gothic fashion magazine style of the core books. Renegade Game Studios seems to be taking a middle ground with a mostly two column layout mixed with artwork and big photo manipulated pieces for chapter and section headers. Mark Kelly’s pieces feel like they are more carefully crafted than the photoshoots of earlier books and I hope he continues to get work shaping how the game will look under Renegade.

Sabbat: The Black Hand is framed as a Monster Manual like book of antagonists and opened up with a call out to anyone expecting players facing rules to play a Sabbat pack that’s not the purpose of the book. There is a large section on antagonist types that can be dropped into the game as well as some updates on the fleshcrafted monstrosities those packs who still have access to that ability are making. Most useful were breakdowns of how different packs might act in one of three different setups; as a lone pack poking the defense of a domain, as an active participant in a siege and as a part of a city run by the Sabbat.

Yet, in the grand old White Wolf tradition, no sooner does the book tell the reader that there are no toys available to the players, it shows just how easy it is to make the resources within available to players. There are new Discipline powers that come with player mechanics and each of the Paths comes with a collection of ethics bullet points that make structuring Chronicle Tenets or Touchstones fairly easy. There aren’t mechanics for things like Vaulderie but a determined Storyteller could probably work something out quickly or pick up one of the Storyteller’s Vault expansions that do the work for you. (I would probably design something like being able to choose packmates as Touchstones which, if you’ve ever seen how bonds work in Delta Green, is a great and terrible idea at the same time.)

While I enjoyed this book overall, it feels a little slight to me. The Sabbat have always fit an antagonistic role in my Vampire chronicles, so the book is extremely useful to me. But to fans who have beloved Sabbat characters, they will probably be left wanting. The Sabbat are one of the big three political groups in the setting and I wanted more info on what they’ve been doing since the big shakeup.

Sabbat: The Black Hand is a good antagonist book and a good start to peeling away the layers of the modern World of Darkness. But it feels like catching up with an old friend and they have to leave just as they started to tell the interesting stories.
Click to expand...

I am a V5 fan. Have been since it got released. But I am not a fan of Renegade Studios not taking any Canadian pre-order for new releases. Boooooo!

robowieland said:
Sabbat: The Black Hand is a good antagonist book and a good start to peeling away the layers of the modern World of Darkness. But it feels like catching up with an old friend and they have to leave just as they started to tell the interesting stories.
Click to expand...

But consider how amazing the stories you'll make up from their hints will be, and how they won't be like the stories anyone else who happened to be listening makes up.

It feels like too little material for too much price. If the paths included rules to use them with PCs and included a few more ( like the path of night and metamorphosis) it would be morr worth it, but as it is, I will be giving this a pass.

I feel this book has too little for too much price. If it included rules for using the paths for PCs, and a few more paths ( like the path of night and the path of metamorphosis, which were very common paths in the sabbat in previous editions) it would be worth it, but as it stands, I wil give this product a pass.
Last edited: Nov 19, 2021

In other news, Paizo contacts White Wolf to discuss the usage of "real world religion" terminology.

If we're talking about sabbat, it does pre-date Wiccans.

On the seventh day, God did sit upon her heiny and invite some friends over for D&D. The combats were long, but it was good.

Pathfinder 2E - Paizo drops use of the word phylactery

Paizo has discontinued the use of the word "phylactery" in its Pathfinder publications due to the word's origins as an item used in real-world religious customs. I wish there was a better name than “soul cage” https://comicbook.com/gaming/news/pathfinder-paizo-phylactery-lich-soul-cages/