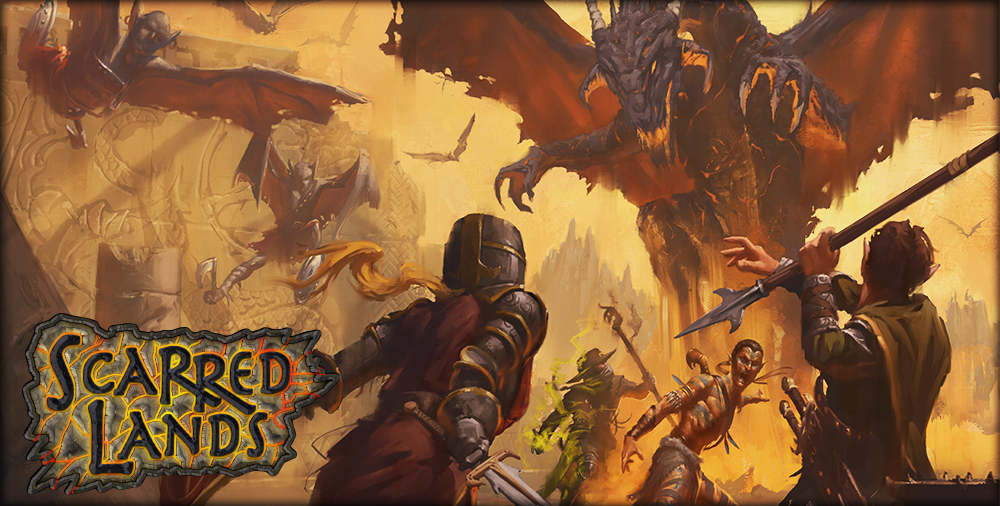 Handiwork Games was launched only recently, and announced the Greek-themed Hellenistika and the mythic Beowulf for D&D earlier this month. Scarred Lands has been around for about 20 years, launched by Sword & Sorcery Studios back in 2000 as a d20 setting. In fact, the original Creature Collection beat the D&D 3E Monster Manual to print!

"A world known to its inhabitants as Scarn, the Scarred Lands is a place of dynamic heroism, supreme villainy, and incalculable magic. Torn and twisted by battles between the titans and their children, the young gods —fought largely by monstrous titanspawn pitted against humans, elves, dwarves, and other “divine races” — Scarn is a world still wounded deeply by the Divine War that took place less than two centuries ago."

They interviewed themselves here:

"Rich Thomas of Onyx Path Publishing has announced the Scarred Lands Creature Collection for 5e will be made in collaboration with Handiwork Games!

Rich Thomas: “Last year, when we were planning just how to take the efforts that Stewart Wieck had started and run with them, we knew that a new version of the legendary Creature Collection was how we wanted to lead into Onyx Path's new exciting era of Scarred Lands.

Running parallel to that, one of my favorite creators in tabletop RPGs, Jon Hodgson, artist and creative director, was putting together his own game studio after his long years at Cubicle 7. Jon did just about everything over there, and as we talked, I realized that he had the experience and awesome artistic taste to take a project from concept all the way through to printing - including running a Kickstarter for it.

The Scarred Lands Creature Collection for 5e will be written, art-directed, and laid out by Jon Hodgson's company: Handiwork Games!”

Jon had this to say about working with OPP on Scarred Lands:

“I’m really excited to get the chance to work with Rich and Onyx Path. We met as Guests of Honor at GenCon a couple of years running, and realised we had a lot in common, and a shared drive to make great games.

Scarred Lands is an extremely cool setting, and I’m delighted to get the chance to work on the latest version of what was such a historic book – the first 3e monster book! I’m pulling together a great team of 5e experts and artists, and we’ll do our very best to delight you with the Scarred Lands Creature Collection for 5e!”

Rich Thomas: “We at Onyx Path are also thrilled to be working with Jon and Handiwork Games. He's assembled an extremely talented crew for both the writing and the art, and I think this is going to be the most useful and most beautiful version of Creature Collection ever. While Jon will be working with Onyx Path, and have access to our writers and artists, he will also bringing another new group of creators into the Scarred Lands, which is going to be great for creators and fans alike!”

Interesting.
I know a lot of DMs can never have enough monsters.

I don't know off the top of my head, but has there been a 5e update of the Scarred Lands yet?
D

Jester David said:
I don't know off the top of my head, but has there been a 5e update of the Scarred Lands yet?
Click to expand...

anyway, as usual I'll buy the book if it will be opened for development

I wish succes for this franchise.

Do you know? Sometimes I like to create crazy mash-up mixing different famous franchises of RPG. One of my ideas is a demiplane of the dread, like Ravenloft, but with some ideas from Kult: lost divinity and adding things of Exalted, World of Darkness, Chronicles of Darkness and Scarred Lands (and the nations from "7th Sea").

The world is the Sphialtisphere, a prison created for powers who lost in a old titanomachy (primal titans, and their lord fays allies vs deisites). The losers have fogortten their memories and they are reincarnated as mortal humanoids living a dystopian post-apocalypse realm where they are preys by supernatural creatures time after time. The rulers are in the Sphialtispolis or nightmare city, a second layer of the demiplane, with the help of the lictors, a group of lord faes with a fat body, full of scales and thorns over their skin and iron tentacles. Gunpowder is known but it doesn't work in most of cities because divine magic doesn't allow, and machine guns are easily blocked by low-level powers, and in the battlerealm too many times the armies's squads are by bulleproof living contructs, (summoned) petitioners or beastouched fays.

Now the war between the petitioners (souls who have started a new life in a different plane) and the dark lord feys for the control of the Somnisphere or Dream kingdom, a third layer and the closest one to a (failed) paradise, is starting to destroy the illusion and some souls start to remember things from past lives and events about the titanomachy. Sometimes some supposedly destroyed souls have come back as outsiders from some unknown aligment plane. Where are the titans now and their possible children? Which was the role of the genies in the past titanomachy and who is their current loyalty for? How the lictors are losing terrain in the rebellion started by the supernatural factions..(vampires, werebeasts, prometheans half-constructs, lord mummies..). And what if the prisoners who controll the Sphialtpolis are the true prisons who the prison was built for?
Last edited by a moderator: Dec 29, 2018

FYI, that link takes me to en Eberron product on the DM's Guild, not anything related to Scarred Lands
D

dave2008 said:
FYI, that link takes me to en Eberron product on the DM's Guild, not anything related to Scarred Lands
Click to expand...

sorry, the right link is https://www.drivethrurpg.com/m/product/197803

Sage of the Scarred Lands

I know I wasn't around but that was because I was sleeping through until 2019. But thanks for the mention Mistwell.

Neat. I’ve been thinking about Scarred Lands a bit lately. I always liked the flavor of the setting, though I only got a chance to borrow from it in other campaigns, not run a full-fledged campaign there. With this, it might be time to rectify that soon.