Hi,
After drawing so much inspiration here, I consider it an honor to share some of the adventures of our campaign.

"It's funny, Shade, the cowards in the trenches now lead the country. The true heroes of the war drink away their fears or lie dead in their graves." - a soldiers wisdom
Click to expand...

During session 0, broken after the Yerasol war, he went on a hike with Barnaby Krist (adventure 10) and rode on a steed with the Great Hunt.


Bezelle Farfleet
A human gunslinger/alchemist, gunsmith theme, Flint native, her father, a RHC-veteran, was forced to a deskjob after some incident. Personal theme: some father issues. Personal quest: what happened to (half-eladrin) mother?
There will be some connections with Isobel Travers (adventure 4) and a rather nasty eladrin breedingfarm 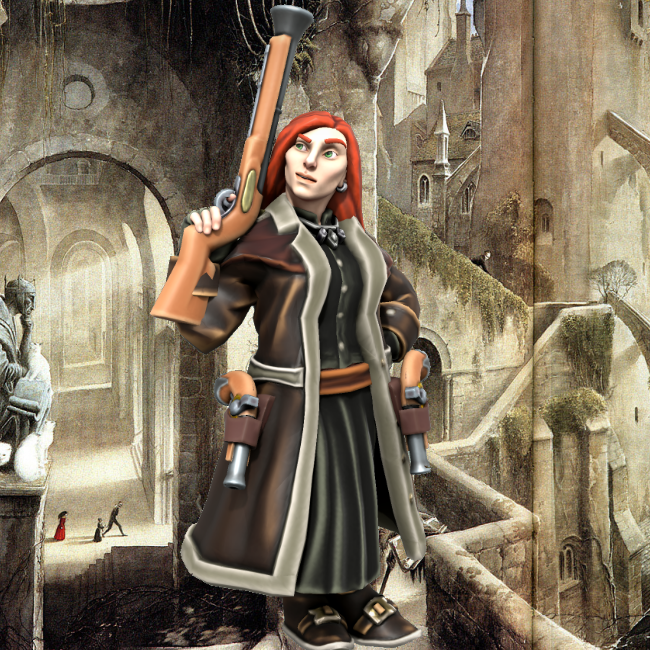 (Portrait made using heroforge)
During session 0, as a student at Pardwight University she got stuck in Foyle Ravine (adventure 5), a freshmen's prank. During her first day at university the dean presented a gnoll student from Ber in front of the assembled students and awkwardly asked "CAN YOU UNDERSTAND ME, GNOLL, DON'T BE AFRAID" The gnoll answered in perfect common: "I am Pardo a student of arcanoscience on your esteemed university, sir."

A Danoran tiefling gunslinger / investigator, martial scientist theme, was frowned upon in Danor when he claimed his alchemical experiments showed evidence of magic, despite the dead-magic zone. Decided to move to Risur to explore the link between magic and alchemy. Personal theme: making connections, to overcome differences. 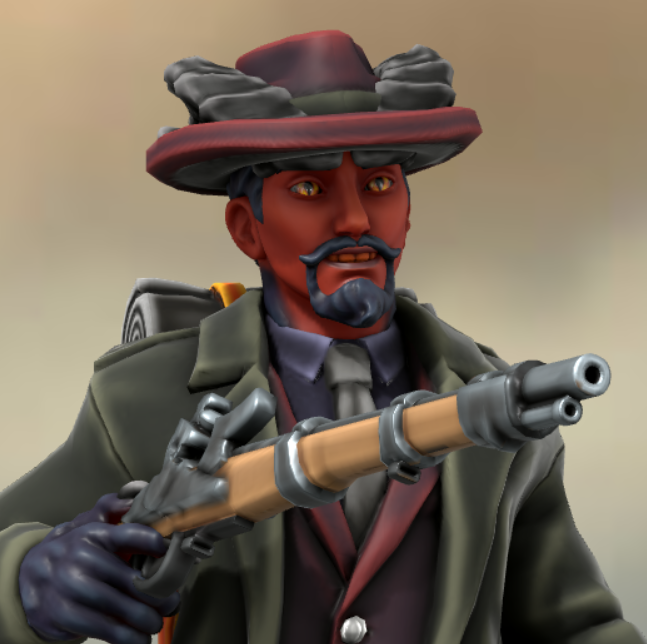 (Portrait made using heroforge)
During session 0, Zhabo worked with Geoff Massade on the manifold of the Coaltongue, establishing connections of alchemical components and planets (puzzle) 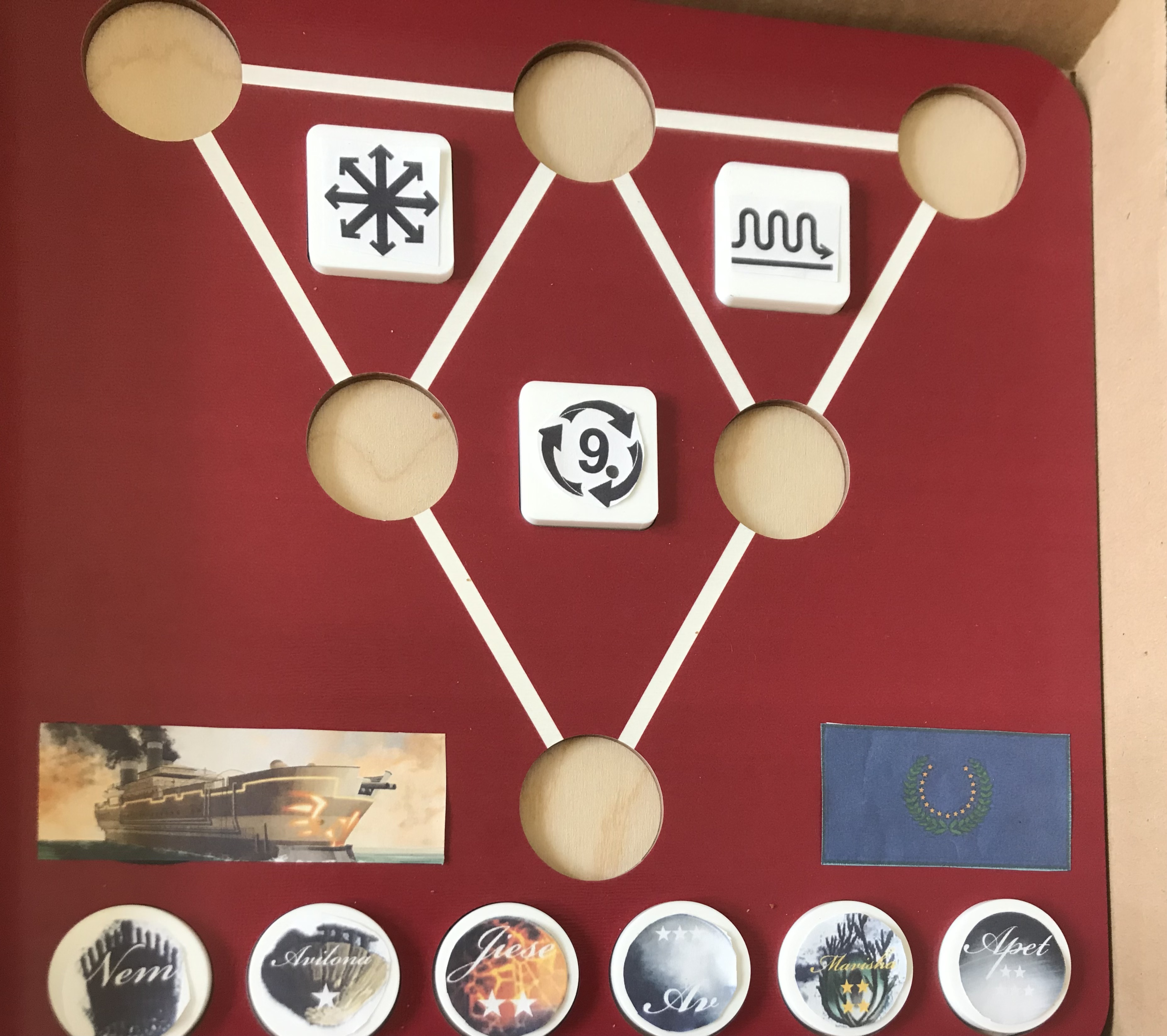 (puzzle, place the six planets, according to a certain ruleset)

Human Bard(diva), spirit medium theme.
A local celebrity as an opera-singer Callonetta stems from a rich family of merchants. The prized ship "Carvallo Bianco" is the flagship of the family fleet. Some say her passed grandfather's soul is still haunts the Carvallo Bianco, others claim these are just stories of lonely sailors. Personal quest: global fame.

During session 0, she performed the opera 'the Red Contessa' at Navras Opera house, and had discussion with the director of the opera about the political message the opera sends to the public. Since the players already experienced the prequel adventure 'Bonds of Forced Faith', the player of Callonetta noticed history has a way of changing facts after hunderd years; the opera was definitely not a factual historical account of the events on Cauldron Hill.

Callonatta will assume the role of shantymaster aboard ships. The shantymaster inspires the crew with song and music, there are some mechanics in play, stimulating the player to contribute lyrics and intended mood for these songs. 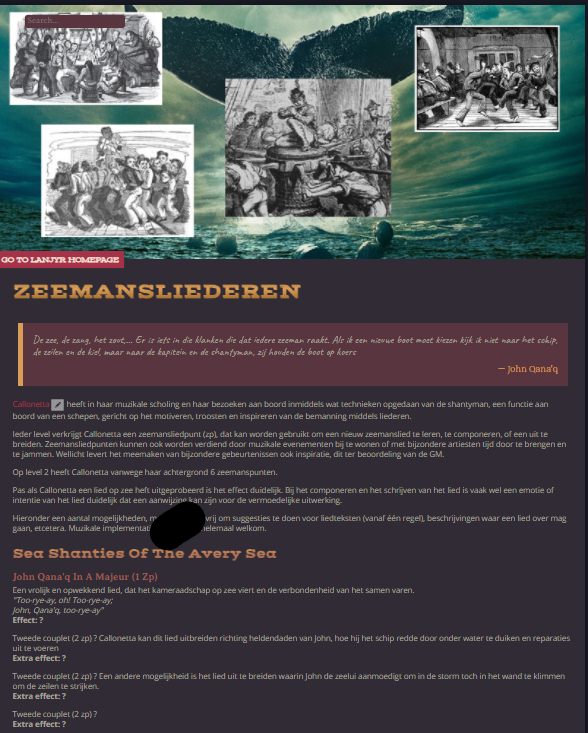 During session 0 ZoZ met with a druid Zordlon of The Ford (Act 2), who guided him to catch a glimpse of the Dreaming. As ZoZ was fascinated by the beauty of this world, the druid encouraged ZoZ to seek out Gale. ZoZ met with Nevard Sechim and discussed fate.

Dwarven Paladin (tortured crusader), Eschatologist theme. As a young adult Drakr born Durance was drawn to the radical eschatologists near Bhad Rhyzhavdut (adventure 11). He soon realized his mistake, but by then wasn't allowed to leave. After enduring torture and imprisonment he was set free by some dwarf, who said it was god or diety "Magran" was responsible for his liberation. The keys of his former prison are now Durance's holy symbol.

Personal theme: being lawful good ;-) personal quest, to discover more about the otherwise unknown Magran (thanks for the inspiration).

Durance will engage in debate-encounters.
Maybe you noticed the player drew inspiration from Pillers of Eternity videogame.

All this hard work up front should lead to a great game. I wish you the best of luck!

R
ZEITGEIST Suggestions for Story/Campaign Based on Player Character Backstories

Nov 5, 2021
Adigard
A
T
ZEITGEIST [Spoilers] Sometimes the players go all in for their backstory
2