Hello again my lovelies, it’s time for another PAIZO PRODUCT REVIEW! The running theme on these has been catch-up and clean-up, and this edition is no exception. We’re finishing off the Devastation Ark Adventure Path with today’s review of Starfinder Adventure Path #33: Dominion’s End! 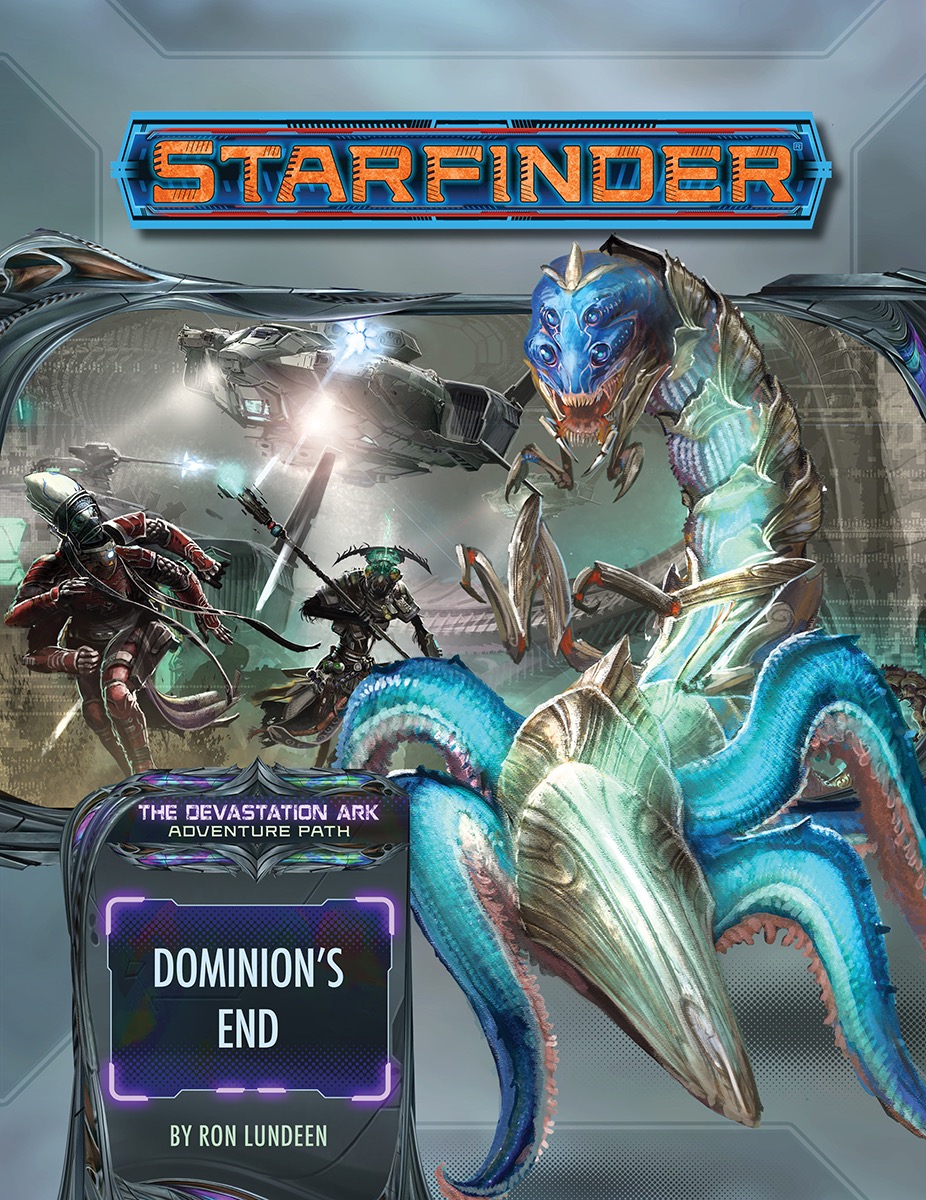 ​
Dominion’s End is the third and final installment of the Devastation Ark AP, starting with your characters at level 18 and finishing with them at level 20. This Adventure Path has been really impressive with the way it has managed the complexities of running high-level parties, its ability to innovate clever and relatively straightforward new mechanics and encounter designs, and its dedication to providing nonviolent solutions and impactful consequences to its encounters. I’m very excited to see how that scales to the upper end of the character scale!

Part 1 kicks off right where AP #32 left off—or, does it? When last we left our heroes, they had just boarded the massive Ark Prime, an ancient and massive warship from the long-lost Sivv Dominion, recently appeared in Pact Worlds space with nefarious designs for the Starstone at the heart of Absalom Station. An easily-missed line at the end of The Starstone Blockade sends the heroes into a stupor, and it is escaping this stupor that is the focus of Part 1.


Right off the bat I want to say I love Part 1: A Life, Simulated. From the players’ perspective, they go from deus ex unconsciousness to waking up in a trench warfare film—and the genre-hopping only gets more varied from there. This whole section is a number of vignettes cut from the memories of an as-yet unseen alien, with enough inconsistencies or jarring imagery to let the characters know they’re all in a strange, disturbing simulation. There’s a tasty little bit of variation in encounter design—one of the vignettes is at a fancy party, one is at a hospital awaiting news on an important surgery, one is a parent-teacher conference—and the simulated nature of the characters’ experience means there are some novel constraints on what resources the players can bring to bear. On top of all this, doing well in the simulations give the heroes some lasting benefits that can come in clutch throughout the rest of the adventure. Well done, all around!

The next section of the adventure finds our heroes getting their bearings and establishing a real foothold on Ark Prime. It’s time to get the lay of the land and head off to the dark heart of these attacks on Pact World space!


Part 2 is a pretty solid dungeon crawl. Unfortunately, that’s pretty much all it is. There’s some flavorful encounters and environmental sets, and a few bits of treasure thrown around to make exploration pay off. This section is bookended by opportunities to take long rests, and there’s nothing here that really carries over from or to the other sections of the adventure beyond a short conversation at the end of a fetch quest—and the information from that conversation can be gleaned from a different conversation with a far more interesting character in Part 3. At the end of the day, there’s nothing particularly wrong with Part 2, it just doesn’t have much of an impact and can be skipped if you’re running short on time.

Here we are, ladies and gentlemen and those who know better! Level 20, the capstone of any campaign, and a bunch of horrible monsters between you and the salvation of the galaxy! I hope you’ve made your peace with Sarenrae because there’s no second chances!


Early on in Part 3 we meet an utterly delightful NPC with big Max Headroom vibes—it can only communicate in the language and grammar of infomercials, and yet it needs to give the players some very valuable information. It’s a welcome spot of humor in an otherwise serious AP.

There’s a nice variety of encounters to deal with here—mostly just chewing through more high-level goons, although some of the weirder encounters can be handled if you remembered to keep your party face alive and whole throughout the preceding combat sections. There’s even a snazzy hazard which isn’t all about soaking up hit points—play it right and your characters can come away with some very useful minor abilities. In fact, opportunities to pick up small boons are littered throughout the final areas of Ark Prime, and there doesn’t seem to be any time constraint (never mind the fact that as far as your heroes know, there’s been a constant space battle raging outside for several days), so take your time and let everyone poke around in whatever computer console or audio-diary-equivalent that you find. Where you’ll get a chance to use those boons outside of the final fight, what with being 20th level, is up to your GM’s patience for running high-level parties.

The final fight is…fine? There’s the final big boss with a big ol’ bag of hit points, fast healing, immunities to all sorts of things, and the ability to make more goons and toss the heroes around; a handful of mooks to get in the way, a couple of brutes to soak up hits and be scary, and some environmental factors to cause some forced and painful movement—all good elements to a boss battle. Still, it takes place in an otherwise empty warehouse of a room, and I can’t help but feel there could have been a cleverer implementation of some of the dimension-shifting technology on display throughout this AP.
Starfinder AP #33: Dominion’s End is a solid adventure by itself, with an excellent transition from the previous installment and some delightful new opportunities for expanding the Stafinder universe and an excellent grasp of adventure design and balance. As it follows on the heels of Waking the Worldseed and The Starstone Blockade, however, it can come up short by comparison. It lacks any of the excitement provided by the in-atmosphere dogfighting or the balance between ship-scale combat and fleet-scale combat, and the whole middle section of it is completely lacking in impact on the rest of the adventure—even in terms of resource management, which was something the earlier chapters did so well!

While the climactic fight has all of the necessary elements of a well-structured boss fight, it lacks…je ne sais qoui? A bit of razzle-dazzle? I may have been a bit flippant with my comparisons to a different space opera in the previous review, but ironically the pattern seems to hold: two excellent installments diminished in part by a stumble right at the finish line. A skilled GM (and any GM running The Devastation Ark should have been taking notes all along because there is a LOT to pick up) can tweak the climax so that there’s more to pay off from all your heroes’ hard work and tie in to the days-long fleet engagement that’s been raging outside.

That’s it for the Devastation Ark, my friends! We’re still working through our catalog, so there’s plenty to choose from for our next review.

Your Turn: What do you want to see—another AP, or a dive into a setting or rulebook?
Click to expand...

I'd love to hear about more APs - Dawn of Flame, Signal of Screams, Threefold Conspiracy or Attack of the Swarm.
(apologies if you've covered these and I've missed them)