SF STARFINDER: Here's What We Know

Click here to view article text
I've compiled all the information we know so far about Paizo's upcoming Starfinder RPG, which launches next year; it was announced in May, but my coverage has been lost in the recent crash. The game is based on the Pathfinder rules, and is broadly compatible but may require some "minimal" conversion. It's science-fantasy standalone game which crosses magic with technology (it sounds very similar to Dragonstar for those who remember that!)

Products. Starfinder Adventure Path and Core Rulebook (August 2017, at Gen Con). Starfinder Bestiary soon after (this looks like it will also contain player alien races). The core rulebook will not be have same structure as the Pathfinder one. Starfinder will not be getting as much support as Pathfinder traditionally has. The setting is included in the core book.

Races. In addition to the Pathfinder core races (Dwarf, Elf, Gnome, Halfling, Half-Elf, Half-Orc, Human), Starfinder also includes Androids, Ratfolk, Kasatha, Lashunta, and two other alien races. The Lashunta -- "They’re the main race for Castrovel, They’re humanoid, psychic… got a bit of a Vulcan thing going for them in terms of their mindset."

Setting. Set in Golarion's solar system (as described in Pathfinder's Distant Worlds), but the core Pathfinder world, Golarion, is missing. Even the gods will not reveal where it is, but they say it is safe - it has not been destroyed. There is a memory gap (actually called "the Gap"), multiverse-wide, covering the entirety of Golarion and its history, although the actual memory gap length varies from place to place. " So you go to one system, maybe the edge is three hundred years before present day in Starfinder, but you go to another system somewhere else and maybe it’s three hundred and five years before present day. Where the cutoff is wavers, and all the Starfinders really want to find out as much information as they can from planets where the Gap is in a different place so they can rebuild that history that’s been lost."

The core location of the new setting is a space station called Absolam Station, which is where Golarion used to be and is described as "the UN meets Babylon 5". Societies are advanced into the future -- "What if Hellknights’ citadels, instead of being castles, were these big warships floating through space? Does the Church of Iomedae have giant cathedral ships throughout the system?"

FTL Travel. FTL travel is part of the setting. The distance travelled can have environmental effects, up to and including creation of or changing of planes.

Starships. Starship combat is described as "Star Trek/Firefly-esque", and also "Battletech/Spelljammer", takes place on a 2D hex grid, and involves all players having a part in combat with each ship role hinging on a specific skill. Initiative has the winner moving last (reverse order) so they can react to the loser. Combat is divided into phases (engineering, piloting, gunnery). Starships have their own character sheets and are upgradeable. Ship roles include captain (buffs), pilot (stunts), science officer (scans), gunner (shoots), engineer (directs power). Fairly standard fare for the genre. 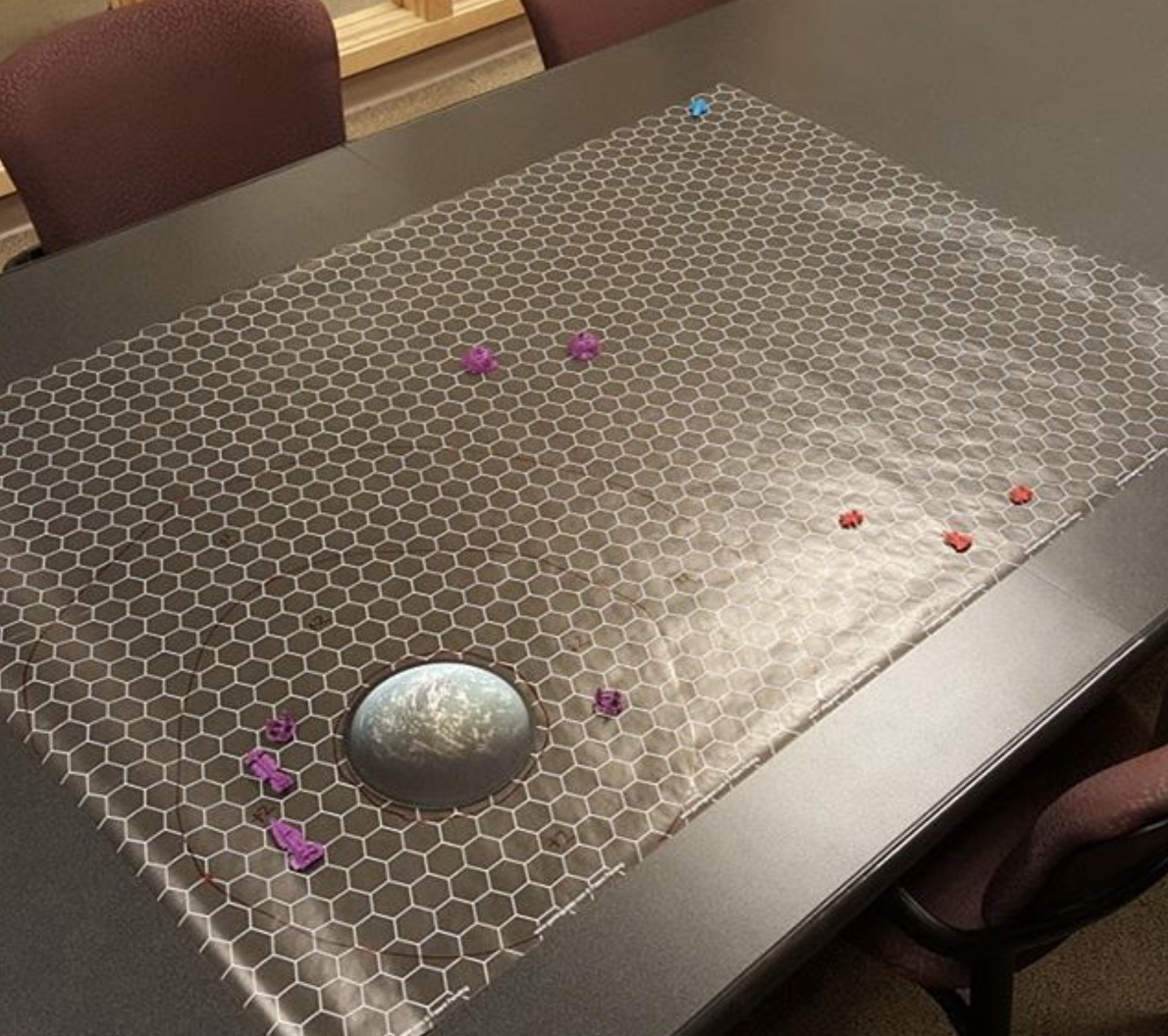 Religion. Hyperspace was "gifted" to the galaxy by an ascended AI god; this god has some kind of link to one of Golarion's gods. Some of Golarion's gods are missing. In the Starfinder rulebook, 20 gods will be listed. Examples include Abadar (god of commerce; followers have created a corporation called Abadar Corp); Iomedae (followers have great cathedral ships).

Rules. Similar to Pathfinder. "There will be changes to the core engine, but it’ll be close enough that if you have a Pathfinder Bestiary, you can take an ogre out of that, give him a laser gun and use him in Starfinder with minimal conversation." Magic items will change -- "One thing that will not be in there is the conventional Pathfinder magic item creation system. We’re tweaking the rules around gear and economics and magic. We want to make it a little less bookkeeping and a little more “sense of wonder.”"

Playtests. There won't be an open playtest of this one.

Places to read more (sadly we lost EN World's interview and all the Starfinder coverage I've done in the recent crash, thus this article). 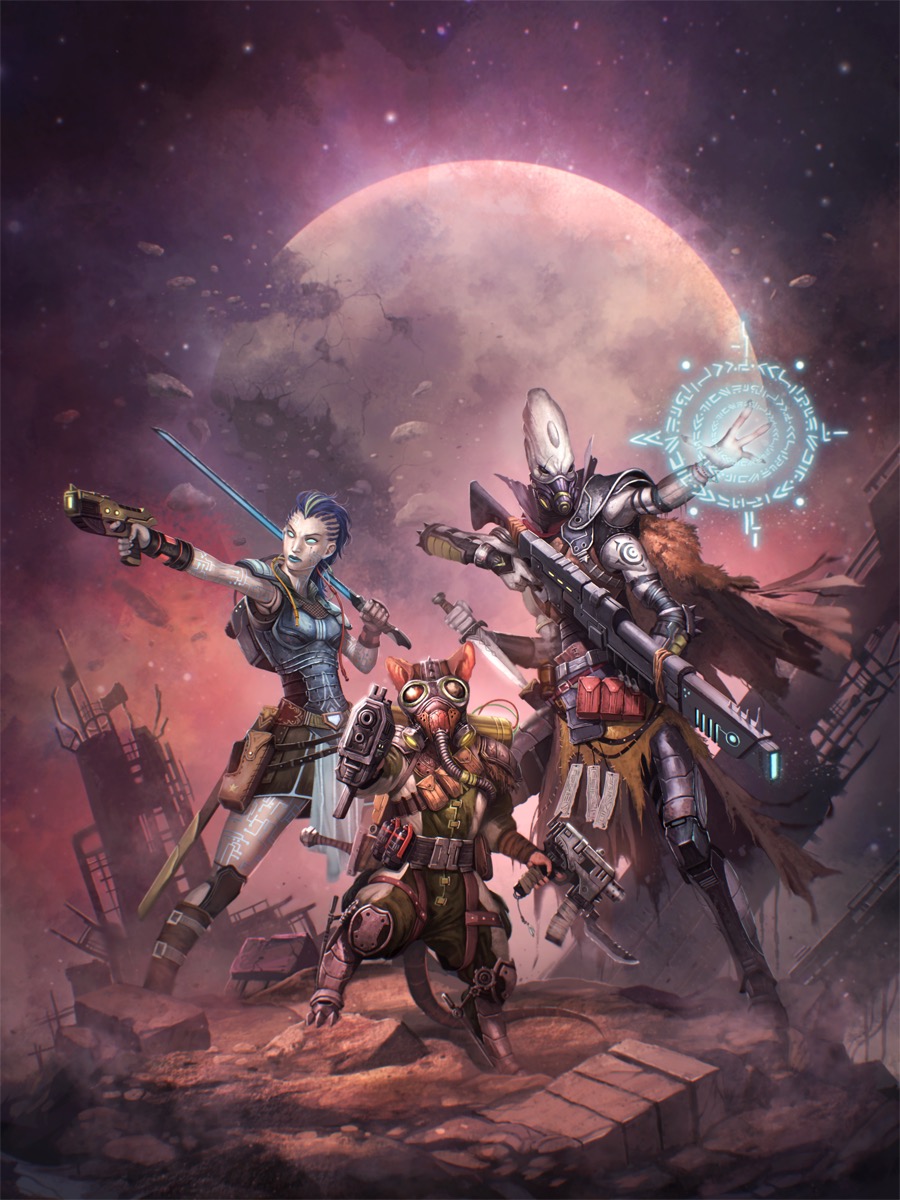 Ah now that makes more sense. We usually do space battles 3d style and never even thought of doing it that way.

Morrus said:
It's a fairly common mechanic. I use it myself in NEW, and I've seen it in many games of this type (also in those using vehicles and stuff, too, not just spaceships).

Two phases. You move in reverse order of initiative, then you fire in forward order. So you get to react to your opponent's choice of position, and then you get to fire first. It works perfectly.

Yeah, that's how Battle Tech combat is resolved, it makes sense, and I didn't find it all that confusing, once you actually start playing.

gamerprinter said:
Yeah, that's how Battle Tech combat is resolved, it makes sense, and I didn't find it all that confusing, once you actually start playing.
Click to expand...

When I demo Battle Tech's little sister minis game, Alpha Strike, I often say that it's "Strategic" initiative instead of "reflex" initiative.

You were better at outguessing your opponent's maneuvers, which makes more sense in some scifi/modern games where you deal with firing solutions and the such.

I will say, I like the recent article on Game Informer about the upcoming Starfinder RPG. While based on Pathfinder, they've changed the math behind many weapon attacks, and in some cases threw away parts of Pathfinder that don't really fit in the chosen direction of the new game. It's supposed to be very lean in comparison to Pathfinder, which I consider a good way to go. And perhaps if Paizo ever chose to attempt a Pathfinder 2.0, maybe that would be a good test bed for development, as was put in place with Starfinder.

Here's a link to that Game Informer article if it interests you.

gamerprinter said:
I will say, I like the recent article on Game Informer about the upcoming Starfinder RPG. While based on Pathfinder, they've changed the math behind many weapon attacks, and in some cases threw away parts of Pathfinder that don't really fit in the chosen direction of the new game. It's supposed to be very lean in comparison to Pathfinder, which I consider a good way to go. And perhaps if Paizo ever chose to attempt a Pathfinder 2.0, maybe that would be a good test bed for development, as was put in place with Starfinder.

Here's a link to that Game Informer article if it interests you.
Click to expand...

There is definitely a part of me that suspects that Starfinder will, in part, serve as a means to test the popularity of new rules for a potential Pathfinder 2.0.

I like that Interface Zero for Pathfinder will be compatible with Starfinder, so even if people don't specifically like Cyberpunk, the bionic, drone tech, etc will all be there and ready.
I am pretty sure that David Jarvis stated that Interface Zero uses some of the subsytems that will be in Starfinder, that initially appeared as optional rules in Pathfinder Unchained.

I'm waiting to see the rulebook itself.

It's not that I don't trust the company or think it'll be good. It's that every time I talk about it, my friends have to remind me they can't hear ultrasonic and I'm tired of setting off the neighborhood dogs.

Oh dear, no one needs another version of PF, really. Gaming community is split enough as is.

Lwaxy said:
Oh dear, no one needs another version of PF, really. Gaming community is split enough as is.
Click to expand...

My thoughts exactly - not only a further splitting of the community, but this could also result in the redeployment of resources to Starfinder which could have improved the existing Pathfinder. If people working on A don't want to be involved in B, or the opposite... not great. Anything which prevent them to pull talent from the entire pool of people for a given project may be a bad idea.

More importantly, I don't really dig the premise of the setting / time jump / Golarion not in the same dimension, etc. The current Golarion has done a great job at being inclusive, even including fictitious pre-WWI Earth with the "Rasputin Must Die!" adventure, and currently delving in HP Lovecraft with Strange Aeons AP. Current Golarion has only one prime material plane (worlds are in same plane but in different galaxies etc.) and the goddess of death Pharasma judge souls from all these distant worlds. It has the spell "Interplanetary Teleport" to deal with moving across great distances within the Prime Material Planes. From what I can tell, the details of where Starfinder sits are nebulous, and it's unclear the setting is in the same dimension, and will be the subject of adventurers' investigation in the setting... Not sure how I feel about a setting that gives no answer to the GM or a limited bit-by-bit doling of the fabric of the universe.

I'm really looking forward to this product and will definitely purchase it!

I've always added multiple universes, as in Golarion to us is just one more prime world same as Faerun, Tellene etc. So that was never an issue.

Starfinder will be an extention for us, to be able to play modern and futuristic games with PF better. At first, I was excited about a space world around Golarion, but I dislike time jumps and unexplained things like "Oh a planet is missing" very much. So I would either just use the setting once we know, if ever, where the heck they lost the world and why, or make up my own reasons and ignore canon from then on. I very much prefer Golarion to be present, and to be able to use all the classes, albeit modernized, from everywhere. The way magic works won't change just because time advances. I hated that about Faerun already. But as I am the GM, I can just make it happen anyway I like, in the end.

On the bright side though, this doesn't mess up Golarion like Wizard messed up Faerun because the world doesn't get changed, it keeps advancing slowly. I do worry about finding enough players to run things, as usual, because among those who just play, or at least prefer, official adventures (a lot of people in my player pool) there will almost certainly be a split between PF and SF. I'm not so keen on running any more 2 people games.

I already have a group for the first SF AP though, so I will give it a try.

Good point about finding players... I recently and finally managed to gather two additional players from the 3.5 gangs still running amok, and there's zero chance they'll devote any time to Starfinder. So yeah... for my group this will never happen.