Hey howdy, y’all, it’s time to dig into yet another PAIZO REVIEW! This go-round, we’re taking a crack at the Starfinder Starship Operations Manual. This promises to be a truly excellent supplement necessary for every down-on-their-luck smuggler, ace spacefighter pilot, and megalomaniac space emperor. Let’s get started! 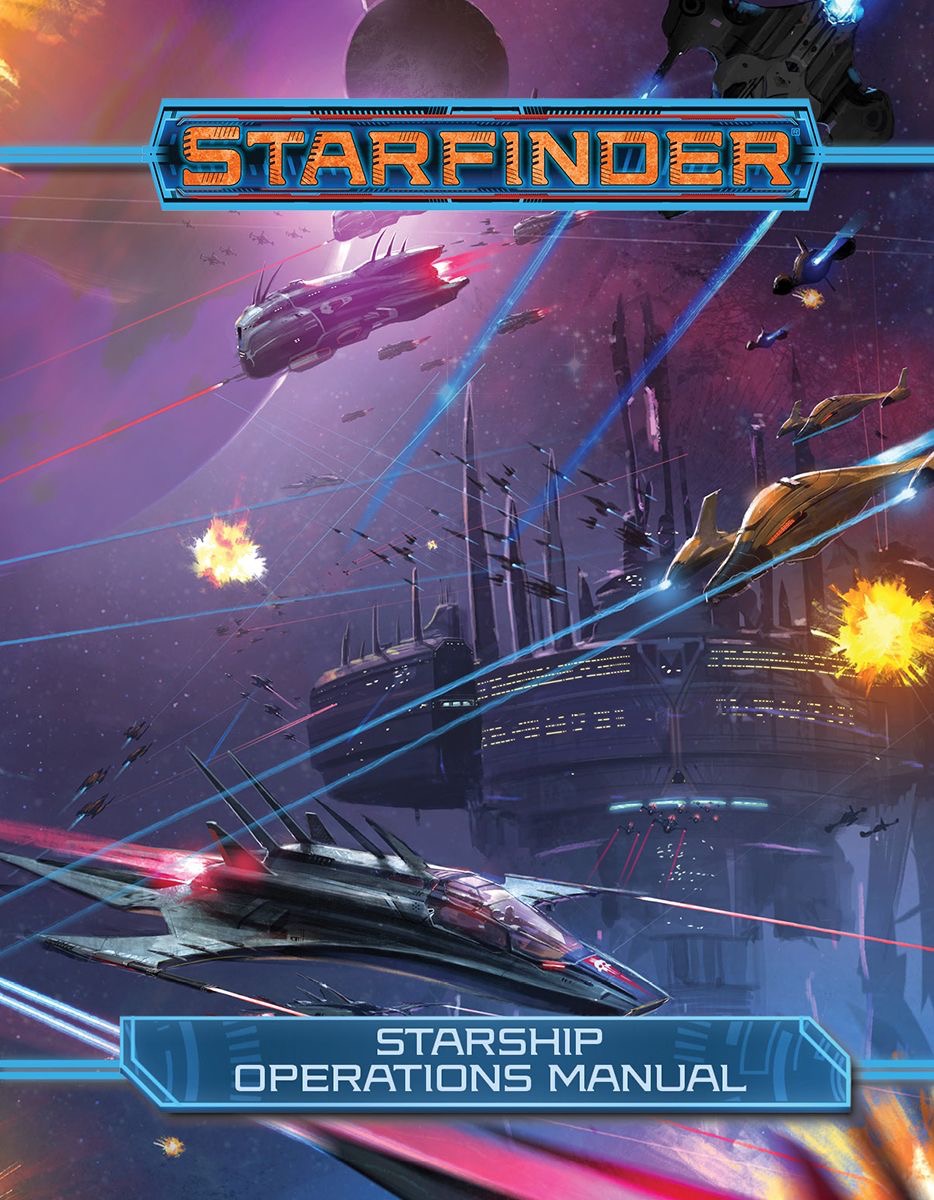 The introduction succinctly lays out what to expect from this book, and it turns out that means mostly good things. Of course every good vehicle book wouldn’t be complete without a section on new vehicle weapons and armor, but what I think will grab most people’s attention is the new take on starship combat. Long-suffering engineers no longer need to spend all combat cycling shields, everyone gets to have a new and snazzy effect on a nat 20, and there’s now rules for squadron combat and armada combat! And, the munchkin in me starts rustling with pure excitement at the word “ultranought” as applied to a miles-long ship. This is going to be great!

We start out looking at new alternate Drift drives. Major factions like the Church of Iomedae or Asmodeus have specialty-flavored Drift drives that have slightly different mechanical capabilities than a normal Drift engine but add a dump truck of flavor. Instead of just blooping through the drift, why not catch a ride through the First World or the Elemental Planes? And, of course, as we’re talking about alternative FTL options, “fold gates” are Starfinder’s answer to stargates or interstellar portals.

My internal munchkin’s rustlin’ got completely out of control as soon as I got to the Starship Weapons section and I saw the words “Starship Weapon Class: Spinal-Mount”. If you had any doubts about which book you needed to make the absolutely most ludicrously oversized and overpowered warship, doubt no more. I also got a full-on belly laugh from reading the description of orbital bombardment weapons – the designers know full well the kind of absurdity will come with handing players the keys to orbital bombardment weapons and it shows.

Another chapter is set aside to discuss alternate and special materials and their use in starship construction. Unfortunately, you CAN’T build an entire ship out of adamantine – everything is limited to generally power core shielding or weapon mounts – but the variety of materials allows for an extra level of fine-tuning for the captain with some room in their budget.

Additional starship systems allow characters to further customize their heap of junk to their particular playstyle. Breaching pods in particular (and the boarding rules later) will be a godsend for vesk characters bored not getting to crack skulls during starship combat. New modules also benefit directly from specific class features, letting different members of your crew have extra little effects while they helm different stations.

Literally everything about supercolossal ships (ultranoughts specifically) set the munchkin in my brain on fire. Minimum crew? 250. Maximum crew? 5,000. Hope you packed Leadership, y’all. Every firing arc can take at LEAST one capital-class weapon and a “backup” heavy weapon or three. They’re so big that a certain percentage of the crew quarters are automatically upgraded at no cost. They have an unlimited number of expansion bays – if you got the credits and BP, it can take ‘em. AND DID I MENTION THEY CAN HAVE SPINAL-MOUNT WEAPONS?! I challenge each and every one of you reading this to make the most ridiculous supercolossal ship you can possibly manage and put it in your game somehow – yes, even those of you playing Pathfinder.

The chapter on starship chases was an unexpected and delightful breath of fresh air. It’s got a solid, deliberate pace, and there’s a back-and-forth between responding to obstacles and making proactive moves to get an edge. Honestly, it looks like it works well enough that it could work as a narratively-focused alternative to traditional starship combat, and I encourage y’all to give it a whirl and see how it does.

Squadron combat is certainly an interesting concept – after all, who hasn’t wanted to re-enact the trench run? but I don’t know how well it’ll shake out in practice. The whole squadron counts as a single ship, both in terms of creation cost and actions in combat. Each crew member still only takes one role per turn, even though they can be spread across as many as 6 ships. Normally, this would prevent any one ship from having access to all the necessary actions for starship combat, but the chapter provides squadron-specific stunts and minor actions which allow for each starship to do most of what it wants to get done. There’s probably a more elegant way to get this done? But that would require some pretty deep-tissue reworks to the basic system of starship combat.

If you’re familiar with mass combat from games past, you’ll have a sense of the scope for armada combat. It makes sense, of course – it’s mass starship combat. That said, as with mass combat, armada combat looks to be something you either all go into enthusiastically and with character investment, or avoid like the plague for all the additional rules and systems.

Woe betide all ye munchkins what put all their BP into shields or a single weapon system, for here at last is textual support for your GM insisting you spend at least SOME of your BP sensibly. Technically, it is an optional rule, but if a GM has any sense in their head they’ll use it.

Finally, I greatly appreciate that the good folks at the Space-Golem have seen fit to provide a plethora of options and ideas for Starfinder campaigns focused on the use and acquisition of their plethora of new starships. First and foremost of course is the STARSHIP-SCALE CREATURES! Make your own or drop your poor unfortunate group down the throat of the horrible space-squid of your nightmares. Not too many examples here, but the rules for creating new creatures is based off the rules for creating new starships, so if you’re comfortable with the latter you’ll be off to a good start.

And that about does it for the Starship Operations Manual! I am going RIGHT NOW to create the largest and most ludicrous supercolossal dreadnought I possibly can, and I look forward to seeing what you munchkins make. Now get at it!
Click to expand...

Sounds like a winner. Now all I need is some people to play the game with!

Starfinder really is a gem of a game and this book really fixes the whole starship combat conundrum the system faced.

Starfinder Starships, one of my favorite things...
2

Starfinder Since my setting is 3PP, I cannot use the Drift...

Starfinder Kronusverse and Colonial Space - default setting for my products...
2

B
Starship Rules at a glance