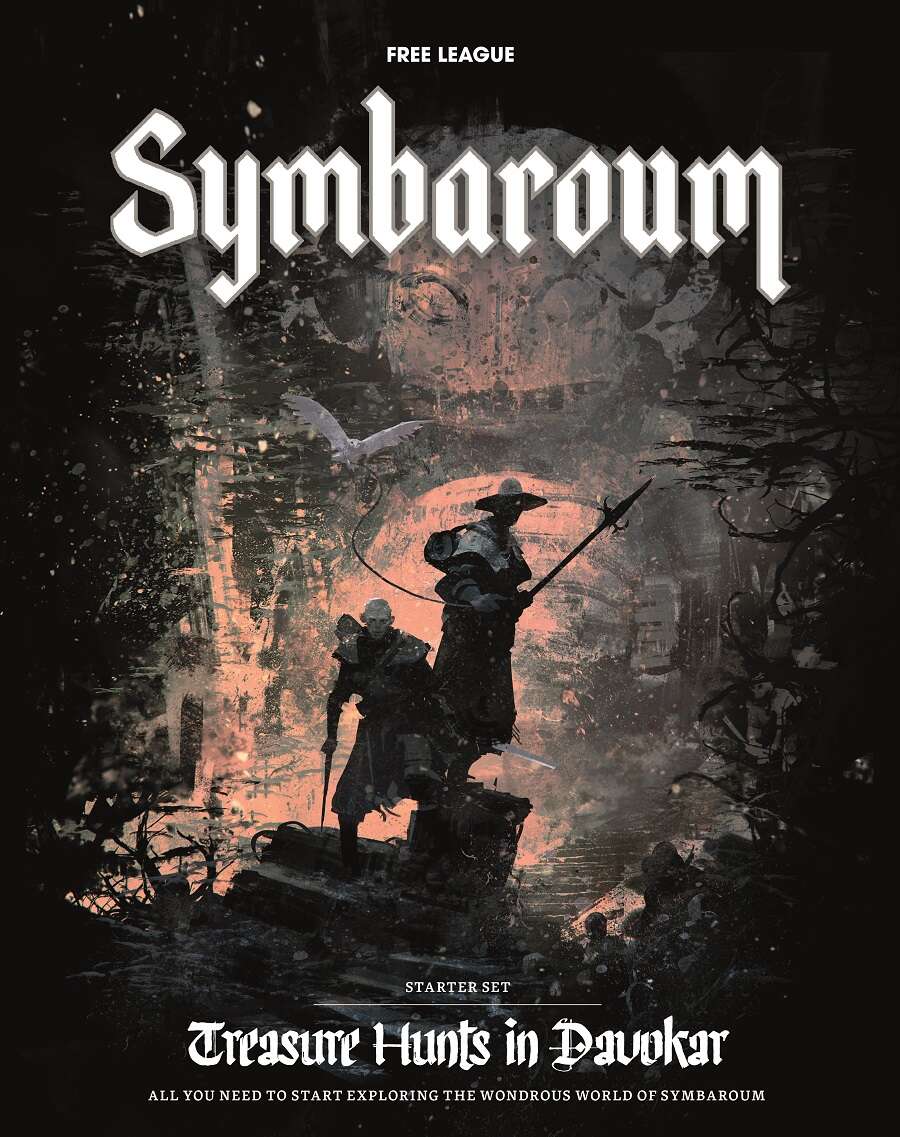 I tend towards dark fantasy when I run games. I’m not entirely sure why. I may be that I didn’t start playing RPGs with Dungeons & Dragons. It may be that I spent a lot of time with the World of Darkness growing up. It may be that dark fantasy feels more heroic when players succeed and more tragic when they fail. Free League Publishing recently released a starter set for its dark fantasy world called Symbaroum: Treasure Hunts in Davokar. They’ve got a few dark worlds on their publishing roster like MORG BORG and Forbidden Lands. What makes this one stand out? They sent me a copy of the starter set so I could see for myself with some trusty players.

Symbaroum’s dark fantasy hails from the dark fairytale side of things, where forests are foreboding and ancient magic carries a price. The title refers to an ancient empire that mysteriously fell ages ago whose ruins are now embraced by the dark Davokar forest. Players play treasure hunters who trek into the forest, discover ancient temples and strange beasts, and hopefully return to civilization with tales to tell and gold to spend. But even at home, different shadowy factions whirl around in intrigues with each other on what to do about the dark magics that live in the forest.

The Starter Set shares the great aesthetics of the rest of the line. Each of the books within have an old manuscript look to them that evokes that tome of illuminated fairytale feel. The art backs up the setting, using Free League mainstay Martin Grip to provide beautiful, painted and haunting examples of life within the Davokar forest. The set also included maps of Davokar, ones related to the pair of included adventures, and Thistle Hold, the city on the edge of the forest where expeditions are launched.

Symbaroum is one of the rare games that doesn’t use Free League’s Year Zero system. It uses a player facing d20 system where players must roll under one of their characteristics modified by either an opposing characteristic or a difficulty number. The system feels fairly basic and brutal, which matches the feel of the world. This is not the type of world where you stride boldly into battle. This is a world where you need a plan to survive. The pain threshold is a perfect example of this. If a character takes an amount of damage equal or greater to it, you must decide whether your character is knocked prone where they will need to spend later actions getting back up into a fighting stance or allow a second attack from their opponent potentially take them out in a one two combo. In the starter set, most players had 10 toughness points and weapons that did 1d6 or 1d8 damage, which meant a lot of player teeth gritting when they got hit.

Magic is a little freer, where players cast spells and rack up temporary corruption. There’s a risk/reward element here as temporary corruption goes away after a battle, while permanent corruption gives a character creepy character traits and gets folks in the world a little uneasy about their existence. All magic comes from this source; even the theurg of the sun included as a cleric style healer had to balance healing against corruption. Within the confines of the world, these theurgs claim its okay to use corruption because their god will protect them if they have faith.

The set contains a pair of adventures along with an abbreviated version of the exploration mechanics detailed in the Symbar: Mother of Darkness book. The journey is as perilous as the adventure site, though there seemed to be a slight oversight. None of the characters provided had the Bushcraft trait that allows a character to roll to find their way and suggested an NPC handle the trait. This seemed like an unnecessary gateway to one of the neat parts of exploring the Davokar; strange disasters that reinforce just how deadly the forest is. I handwaved it and let the player hired as an expedition guide make the roll, though we worked out that his character may have exaggerated his knowledge of the forest for a better paycheck.

The editing is the biggest flaw in the product. It got a little confusing figuring out what modifiers to apply to specific rolls. I found a section that had clearly repeated text. The character sheets come pre-filled with specific talents, but there’s additional text in the main writeups that the player should be aware of. We still had a fun, spooky atmospheric experience but this element kept the set from ascending the heights of other well-done starters of the era like the Essentials Kit or Warhammer Fantasy Roleplay 4th Edition.

The price point is also something to consider. A hard copy of the Starter Set is $10 USD less than the core book, which includes more detail on the world and full character creation, but excluded the exploration mini game, the shorter adventures and the admittedly handsome dice set. Buying the Starter Set as a PDF means losing out on the production value of the books and maps, but between the adventures included and the free Quickstart which also has another adventure, it might be a better value to go this route for those adventurers looking to save a little gold.

Symbaroum is a great game for fans of The Witcher style dark fairytale fantasy. But like the Davokar forest, there are many paths into it that can be satisfying in different ways.

If you enjoyed this review or found it informative, please consider purchasing the product through the affiliate links included in this post. Every little bit supports your favorite writers.

Supporter
Symbaroum is very close to the top of my list of games I love but haven't gotten to play yet. The art alone is worth the price of admission.

Looks great. Hope they make a 5E version at some point.

They have one in the works!

Ugh. Can't folks just accept a game on it's own merits? It's like saying "Look at that Ferrari. I hope they make a Ford version".

NerdyBird said:
Ugh. Can't folks just accept a game on it's own merits? It's like saying "Look at that Ferrari. I hope they make a Ford version".


I will pass on your disappointment to my gaming group. I am sure they will value your input.

I work 50+ hours a week and have a family. Most people in my group are in the same position and work even more than I do. It comes down to time for us. Plain and simple. It is easiest to stick to one system.

And save your judgement for someone else. I have played basic, 1st, 2nd and 5th edition D&D, Gurps, Warhammer, Rifts, Shadow Run, Boot Hill and Star Frontiers in my 30 years of gaming. Certain realities inform my gaming at this point and my core group has made it clear for now 5E offers the most value as far as enjoyment vs time investment.

If you're interested in the 5e Ruins of Symbaroum, you can check out the sampler on DriveThru. It has sample characters, full rules for a limited group of origins and classes to 6th level and two sample adventures.

NerdyBird said:
Ugh. Can't folks just accept a game on it's own merits? It's like saying "Look at that Ferrari. I hope they make a Ford version".

A lot of people are loyal to brands so a Ford guy wants to drive a Ford and even if another car company makes a better model or has some inovation they will want Ford to make a version versus buying another brand.

zedturtle said:
If you're interested in the 5e Ruins of Symbaroum, you can check out the sampler on DriveThru. It has sample characters, full rules for a limited group of origins and classes to 6th level and two sample adventures.
Click to expand...

Thank you. I downloaded it and it looks great. Look forward for the full conversion.

Jeff Carpenter said:
A lot of people are loyal to brands so a Ford guy wants to drive a Ford and even if another car company makes a better model or has some inovation they will want Ford to make a version versus buying another brand.
Click to expand...

While I get what your saying, the constant refrain of "I'd be interested if this was 5e" is wearing thin. I'm not going to yuck anyone's yum, if you love 5e that's great and i wish you all the fun in the world, but please stop asking for 5e versions of games that aren't 5e. Instead, enjoy all the options you have that are specifically meant for 5e. Or, if you have the luxury, spread your wings a little and try something different.


As a matter of fact, a 5E version is in the making, and coming to Kickstarter in mid-April! You can sign up for notifications here: 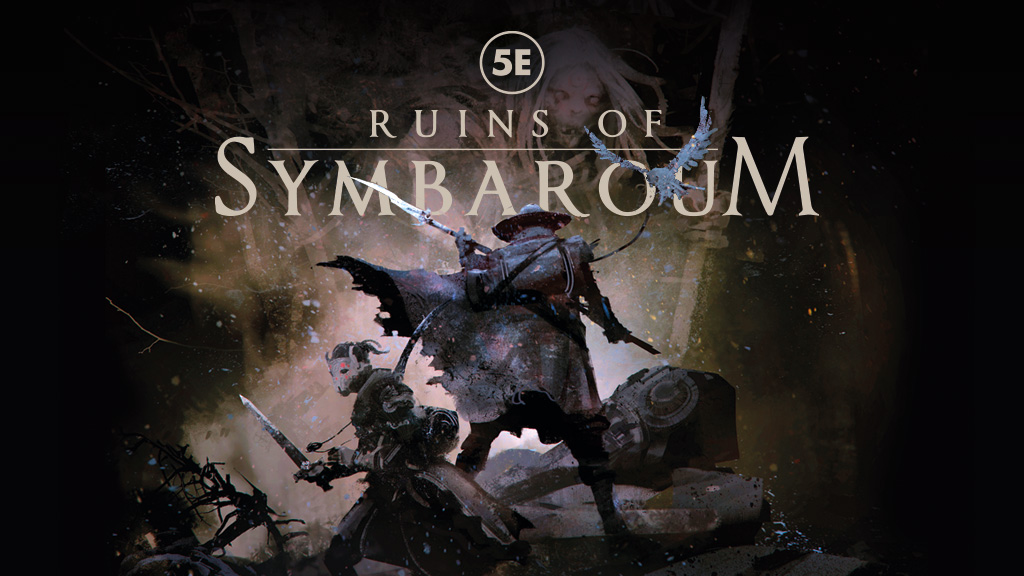