On a storm-wracked sea, the ship the Heart of Iron heads for the island of a long-forgotten, long-abandoned temple holding untold treasure left by an extinct people who sacrificed it to placate a sea demon. In the vast plains of the Sunlands, merchants claim a great treasure lies unclaimed in the ancient cursed ruins of Juakufa. Adventures await in the Broken Empire. 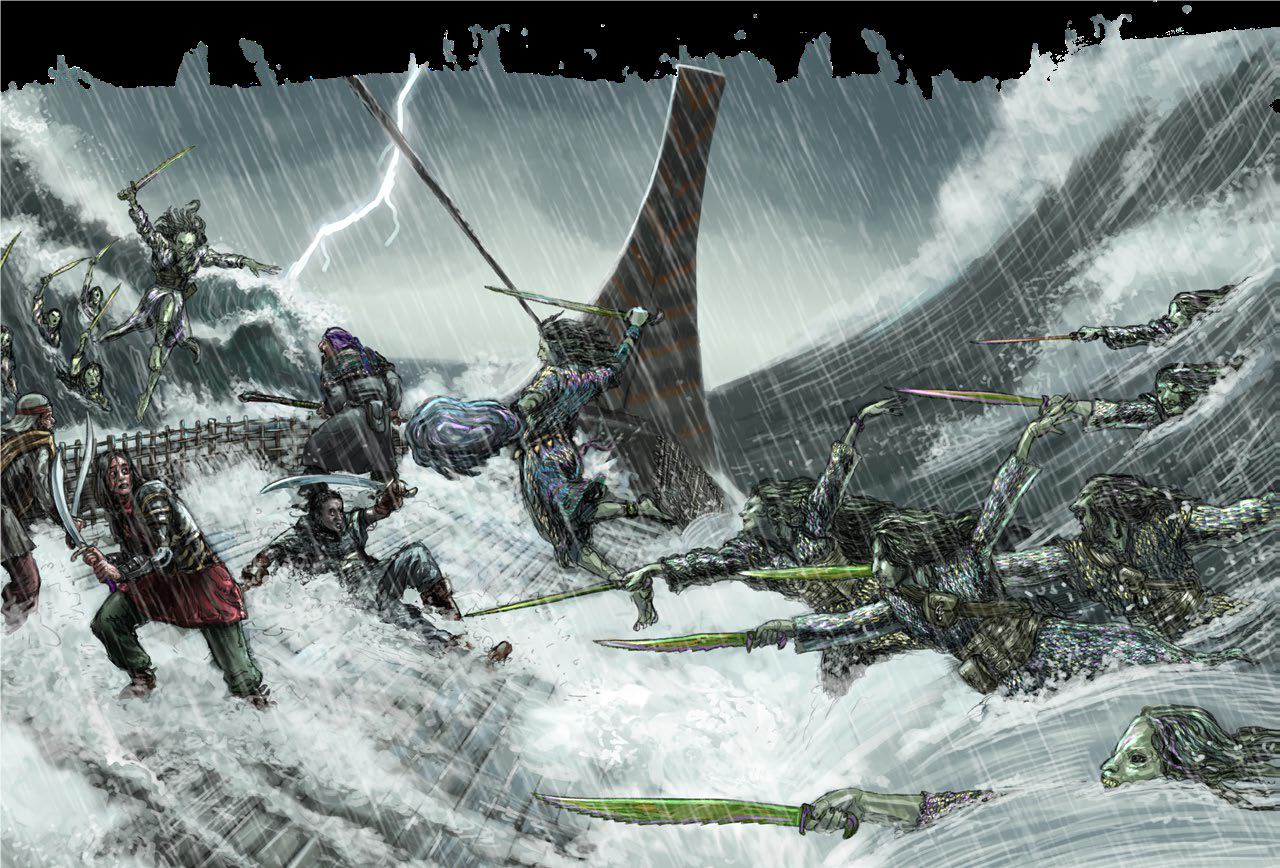 Sea Folk Attack the Ship the Heart of Iron in The Sea Demon’s Gold​
The Sea Demon's Gold (PDF) is designed for 1st level characters and The Song of the Sun Queens (PDF) is for 2nd level characters. . I received comp PDF copies of both adventures when I interviewed Shane Ivey. Combining these two adventures together gives a DM a starting location, a new world called the Broken Empire, and the first two adventures to kick off a new campaign all based on ancient Mesopotamian myth.

The Song of the Sun Queens includes a list of gods for the Sunlands (the hot desert southlands of the setting). A dedicated Swords & Sorceries website brings additional options including new subclasses for the barbarian, fighter, and rogue and the new cleric domain of summoning.

Arc Dream Publishing has four more adventures planned, each for the next character level. An entire Broken Empires adventure path campaign of adventure covering levels one to twenty is possible if the current adventures become popular. These first two adventures offer ideas to scale encounters for stronger or weaker parties. Also included are all the stats for the monsters and NPCs as well as five pregenerated PCs. Spoilers follow.

Gnolls and a Giant Hyena Hunt a “Not-Here” A Blink Dog in The Song of the Sun Queens​
The Sea Demon’s Gold starts with a ship questing for lost gold. An attack from the sea shipwrecks the PCs. Two factions of sea folk threaten the PCs, with the one simply wanting to drive them off rather than trying to kill them outright winning out. The PCs must investigate the Sea Demon’s temple and make hard decisions to win the day.

The adventure is unique in that a PC can pledge loyalty to the Sea Demon and claim the treasure in its temple without conflict. However, their personality will slowly shift to chaotic evil and they must take a level of warlock with the Sea Demon as a patron. Or they can consider sacrificing someone to avoid some conflict. The adventure is no simple hack and slash dungeon crawl, and the PCs have interesting options to consider.

The Song of the Sun Queens offers a mini-setting complete with a map, gods, local rulers and locations, and even a unique martial weapon. Two queens rule a kingdom reduced in power by a curse and their own rivalries. The adventurers arrive wanting to find and explore the lost ruin of Juakufa. The adventure kicks off with ostrich wrangling on zebra or on foot and fighting a feathered velociraptor. It quickly picks up speed with a queen seeking to take an adventurer to her bed. Choices the adventurers make determine how much help they receive before setting off into the desert.

Their journey into the desert takes them to several villages and an encounter with gnolls and hyenas hunting blink dogs, called “Not-Heres”. PCs that save the blink dogs may learn more about the desert and gain valuable allies.

The Bleak Lands, the desert where the ruins are found, are dangerous. Disease is a real threat along with a death elephant and other monsters. Gnolls and hyenas also continue to stalk and try to ambush the PCs.

Juakufa offers challenges of its own, including a moon ghost and a bound devil. If the PCs overcome both, they have the option to break the curse on the ruins. If they cleanse Juakufa, several moon ghosts are freed and can find peace. The Sunlanders may also return to their former capitol and begin rebuilding their lost lands. This change may further embroil the adventurers in future plots of the two queens.

The Swords & Sorceries D&D 5E adventures take the settings and monsters of D&D and reverse engineer them back to their mythological roots. These D&D adventures were designed by combining history, folklore, and archaeology and repurposing them to a fictional setting. Kurt Komoda, their artist, researched ancient Mesopotamian art as inspiration rather than using Tolkien style art. The adventures include not just monsters and treasures, but also a detailed setting in the Sunlands complete with gods, cultures, and monsters that spring from the setting itself. If you want a unique vision for D&D, check out these adventures for the Broken Empire.
Click to expand...

Very cool! Looks like there's a 3rd level adventure available now too: The Tomb of Fire

Agreed on the art. That Hyena must have caught quite a few Blink Dogs previous too- it's got some junk in the trunk


Honestly, I thought it was a Feral Hog at first glance having experienced a few that looked similar back when I was an avid bowhunter.

EDIT-added these to my DTRPG wishlist for my next round of purchases.

You don't see striped hyenas in D&D art very often, so is definitely a bonus seeing one. And blink dogs looking like African wild dogs? That's just awesome. Seeing gnolls get any sort of love is great. The first part doesn't have my interest, but the one with the gnolls does.

oreofox said:
You don't see striped hyenas in D&D art very often, so is definitely a bonus seeing one. And blink dogs looking like African wild dogs? That's just awesome. Seeing gnolls get any sort of love is great. The first part doesn't have my interest, but the one with the gnolls does.
Click to expand...


These adventures sound like they'd fit very well with a Midgard Southlands campaign.