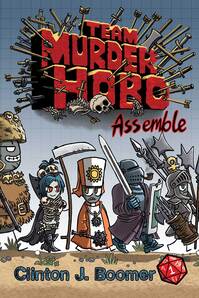 What if you crossed Archer and Brooklyn 99 with D&D?

Broken Eye Books is publishing the hilarious debut adventures of Clinton J. Boomer’s fan-favorite fantasy gaming party, Team Murderhobo: Assemble. What happens when the lovable barbarian, perpetually high druid, judgy paladin—absolutely no ninjas—and all the others are thrown together? The punchline to all the RPG jokes ever told...

With Team Murderhobo, Clinton J. Boomer has created a series of short, comedic, in-character gaming scenes, composed of all the traditional stock characters of fantasy gaming, interacting with each other in a day-to-day, workplace-style comedy. Lots of gaming jokes and pop culture references thrown in. Rocks fall, everybody laughs. This lovable crew will steal your heart--and your coin purse, so stay wary.

"These little slice-of-life comedic moments draw from shows like Archer and Brooklyn 99," says Boomer. "Larger-than-life characters in impossible, action-packed scenarios who still find the time and energy to bitch at each other about totally mundane crap—extreme personalities forced to work together, bouncing off one another and creating comedy in friction."

New scenes with the characters are tweeted daily by Boomer (@boomer_kid). Read the collected adventures of the series in the forthcoming Team Murderhobo: Assemble under our Stink Eye imprint, with cover art by Jason Bradley Thompson (@mockman).

Wizard: “Ahh. That FIRST sip of coffee.”
Fighter: “YOU REALIZE WE’RE IN COMBAT, NO?!”
Wizard: “YOU are in combat. YOU idiots kept me up all night, ergo no spells. I’m gonna sit here, drink my coffee, and stab anyone who gets close. Look! LOTS of people have already been stabbed. Some of them enemies!”