The Book of Boba Fett (spoilers)

MarkB said:
I think the better take-away is that what the Star Wars universe really needs is Jedi Hogwarts.
Click to expand...


It's a popular source of conflict now though (Jedi vs Sith). Wasn't that explicit in OT but since mid 90's I suppose.

Deset Gled said:
There's a lot of space between "the parents might need some help" and "total physical and emotional isolation coupled with religious brainwashing".

Also, it's pretty troubling to claim that force sensitive folks will naturally tend towards the dark side without Jedi training.

I think it depends a great deal on how you view the dark side. If you view it as a corrupting cancer, like George Lucas once did, then it makes some sense that the Jedi would want to get to Force sensitives before they become corrupted. Unfortunately, Lucas couldn't stick to one theory, and it seems that Disney is going with the whole "balance = light and dark are equal" thing, rather than balance = no dark side.

Don't forget that the Jedi and the Force were inspired by real world philosophies (e.g. Taoism) and monastic traditions.

Enevhar Aldarion said:
Everyone talking about the spread of information, or the lack of, need to remember that Star Wars was created in the 70's, long before the craze of social media and cell phones and with a barely existing internet. Same thing with original Star Trek in the 60's. If either were just being created in the 21st century, so much of that background information for the setting would be different. Think about all the viral videos/holocrons that would be floating around out their, both pro and anti-Jedi, otherwise. But because that is how the original trilogy was written, everything since then has to stick with this seeming lack of ubiquitous communication.
Click to expand...


Indeed. The original series doesn't even really do 70's mass communication culture. It's space fantasy drawing on sci-fi serials, samurai movies, and Joseph Campbell monomyth theory, rather than the sort of hard science fiction that was concerned about technologies and its impacts.

And I think this is a good call. Star Wars is about grand heroic adventure not specific technology. It is notable that one of the major pieces of early Star Wars media that Lucas had the least involvement with, the Star Wars Holiday Special, was all about depicting communications in a very 1970s way and this is one of the chief elements in that famously awful show that really undermined the "epic star wars gravitas" and helped cement it as a much reviled embarassment.

This is why I found the opening crawl of Rise of Skywalker so off-putting with "The dead speak! The galaxy has heard a mysterious broadcast, a threat of REVENGE in the sinister voice of the late EMPEROR PALPATINE." I like the cheesy tone well enough, and while bringing back Palpatine was problematic for this trilogy, it at least was justifiable in terms of trying to create an overall continuity for the 9 part saga. But seriously, 40+ years of movies in and now you're going to broach the subject of mass communications in this galaxy without really explaining it? And yes, of course communications technology is covered in expanded universe materials and such, but the movies never covered that and they don't really explain what's going on here. Is the evil emperor jamming all radio communications? Are wookies trying to watch holovids of Jefferson Starship in peace only to be interrupted by Palpatine's cackling? Or did the Emperor just upload a mysterious podcast for people to take in at their leisure? 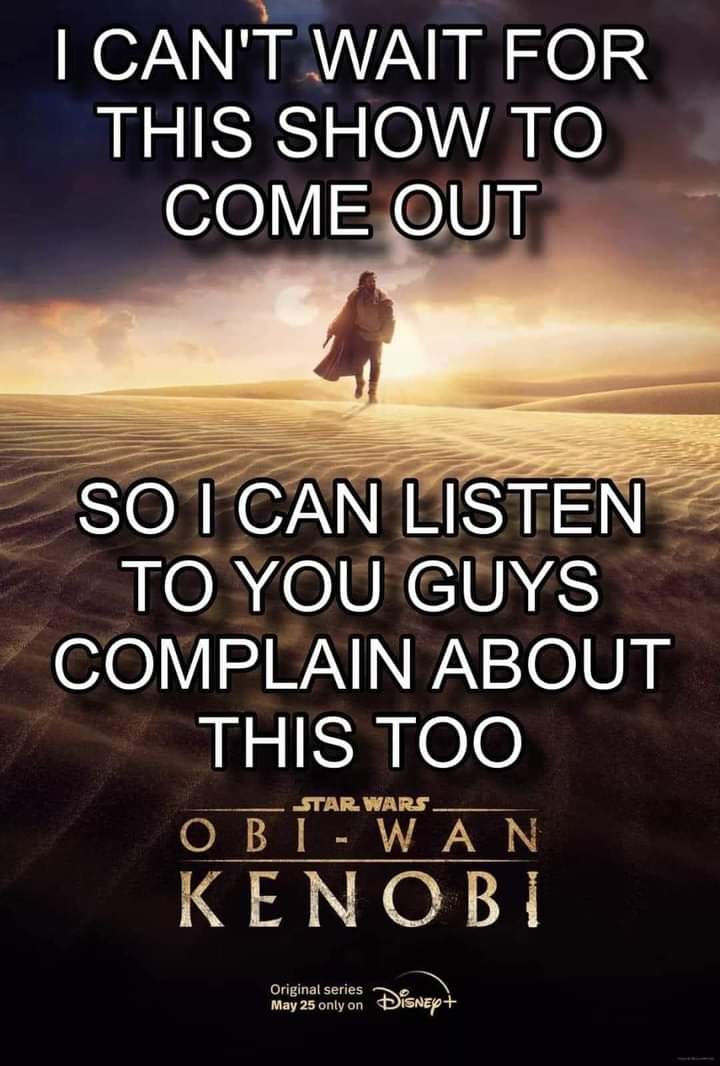 I don't think you need to wait until it's out for that.

MarkB said:
I think the better take-away is that what the Star Wars universe really needs is Jedi Hogwarts.
Click to expand...

Meh do you realize how dangerous hogwarts is...<looks at order 66>.
nvm, go hogwarts.

Shades of Eternity said:
Meh do you realize how dangerous hogwarts is...<looks at order 66>.
nvm, go hogwarts.
Click to expand...

I just want to see the yearly rotation of Star Wars supporting characters assigned to teach Defence Against the Dark Side. "Hey, that Jar Jar Binks worked with some of the finest Jedi knights. He must have plenty of insights to pass on!"

Man it hit me like a ton of bricks.

He's a grumpy old man that is really good at somethings, kinda stinks at others, but has trouble with authority to the point of belligerence, but despite being a dick, really does have a soft spot for most people.

S
ZEITGEIST The State of My Zeitgeist Campaign (help appreciated!)