Monte Cook Games has a new RPG experience coming, The Darkest House. This game defies easy categorization and continues to show the creative range that MCG is known for. MCG COO Charles M. Ryan explains how this project is compatible with most RPGs, where it’s designed for play, and what to expect from The Darkest House. 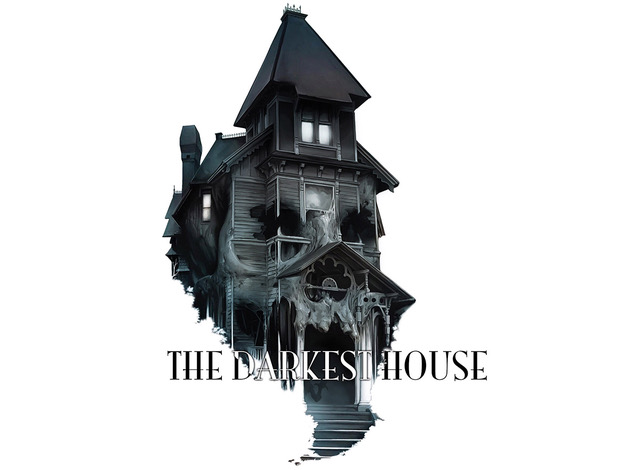 EGG EMBRY (EGG): Thanks for inviting me to learn more about your project, what is The Darkest House?
CHARLES M. RYAN (CHARLES): Thanks for talking to me, Egg! The Darkest House is a sojourn into horror for your existing characters and your existing campaign. And it’s an entirely new product format—one designed specifically for online play. So it’s compatible, rules-wise with whatever you’re playing now—5e, Cypher System, FATE, Call of Cthulhu, you name it. And it’s compatible with your setting, too. And it’s made to be played online, as many of us are running our games now. So you can use it with Roll20 or Astral or Zoom or Discord, or however you play TTRPGs online. And it not only makes that easy, it actually takes advantage of the ways in which online gaming is a little different than in-person gaming, and uses those differences to give you a better experience.

EGG: This is a horror themed product, correct? What subgenre(s) of horror does this focus on?
CHARLES: Well, ostensibly it’s a haunted house, and maybe that’s what the players are led to believe when they investigate it or check it out. Or maybe they just think it’s a spooky old abandoned house, and they’ve heard that some bandits are using it, or it’s the vampire’s lair, or whatever. But the House isn’t really just a location for the antagonists, be they ghosts or bandits or vampires or whatever. The House is the antagonist. An antagonist that traps you and wants to consume you and makes you face a lot of what defines you and your characters and your party.

EGG: Any particular era that this content focuses on?
CHARLES: That’s a great question. The short answer is: The House is from your time. Whether you’re playing a modern campaign or classic fantasy or even science fiction—the House doesn’t care what’s going on in your world. It finds a way to seep into every universe. So maybe it’s a creepy abandoned manse on the hill, or that apartment at the end of the hall that can’t keep tenants for more than a week or whatever—these can all be entrances into the House. The House is hungry. It wants what you have. It will find a way to slip into your world. 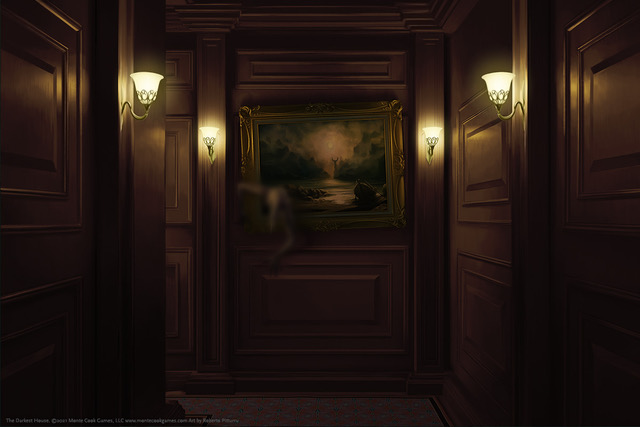 EGG: This product is compatible with most RPGs, correct?
CHARLES: Yep. Within the house, you’ll play using the House System rules. They’re made for the style of play within the House. And they’re sort of a Rosetta Stone for converting characters—it takes maybe five minutes to convert your character into the House System. When you emerge from the House (assuming you emerge at all), you’ll go back to your regular character sheet. Even cooler? Nothing says the characters all have to be converted from the same system. So you could easily bring in several of your favorite characters from old campaigns to work together to escape the House. Or reunify an old gaming group that’s spread out across the country or the world.

EGG: Why make it compatible with other RPGs instead of “just” a standalone game?
CHARLES: So it’s not just about being widely compatible. It’s also about playing with existing characters in your existing campaign. Characters in the House will find their ideals, beliefs, and relationships challenged. Their backstories and the events of their adventuring careers will come into play. The Darkest House really shines when the characters—and the party—have history and a past and existing relationships when they go into it. It’s made to fit into your existing campaign not just because it’s friendly to all sorts of game systems, but because it actually works best when there’s all that background to build on.

EGG: These are solid ideas. Who is the creative team behind The Darkest House?
CHARLES: The Darkest House is Monte’s baby, from the concept and design side of things. Our Art Director, Bear Weiter, was as always instrumental for giving it not just its look, but so much of its atmosphere and feeling. And I worked with our IT guy, the awesome Jeremy Tolbert, in building the actual product. Of course, we’re a small team, so when you bring in editing and proofing and testing and so on, pretty much the entire MCG team has been hands-on to one extent or another. 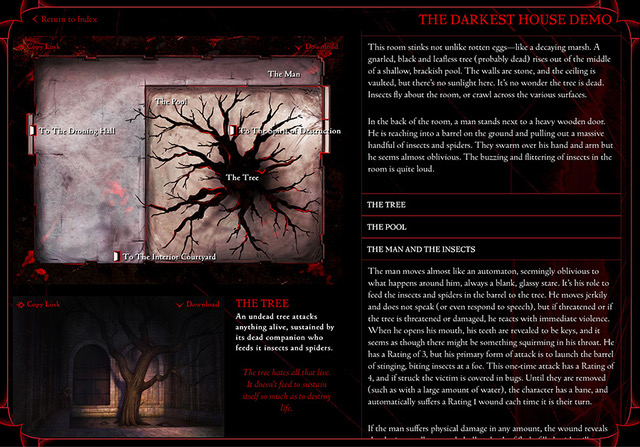 EGG: Will this be distributed via crowdfunding or rolled out traditionally?
CHARLES: Both! The Kickstarter launched on March 16th. It’s a short one—it’ll end on 2 April. Then The Darkest House will come out in May.

EGG: Since none of us get to do convention hand selling these days, let me ask you how you’d position this product to a 5e player that shows interest while at your booth?
CHARLES: That’s an interesting question, given The Darkest House is a digital-only product specifically aimed at online play. So if I was giving a pitch at Gen Con, I’d definitely want to have my laptop on hand to show it off, so people could see what an awesome experience it is for the GM. Although it’s like an adventure book or campaign book in terms of what it provides to the GM, it’s really nothing like conventional RPG books or PDFs. So in addition to that, I’d tell this 5e player that it’s going to give your players a good scare and a real challenge that’s different from what they find in conventional adventures. And that along the way it’ll make your characters and your party stronger, more developed, and more bonded, all of which they’ll take back into their campaign—along, perhaps, with some other consequences of their time in The Darkest House. . . .

EGG: Beyond The Darkest House, what other projects are you working on?
CHARLES: Well, the big one of course is Ptolus: Monte Cook’s City by the Spire. As I write this, we’re literally in the final days of proofing this ginormous book (two books, actually—the 5e version and the Cypher System version). Then they go off to press. It won’t be long now before Ptolus is in the hands of gamers everywhere! And of course we have other titles in the works all the time, with supporting titles for Ptolus, a big 5e adventure book for Arcana of the Ancients (called Where the Machines Wait), and more Numenera titles like Vertices and Break the Horizon in the works.

You can download a preview of The Darkest House from the Kickstarter or from DriveThruRPG, to see what we mean when we call it an entirely new type of RPG product! 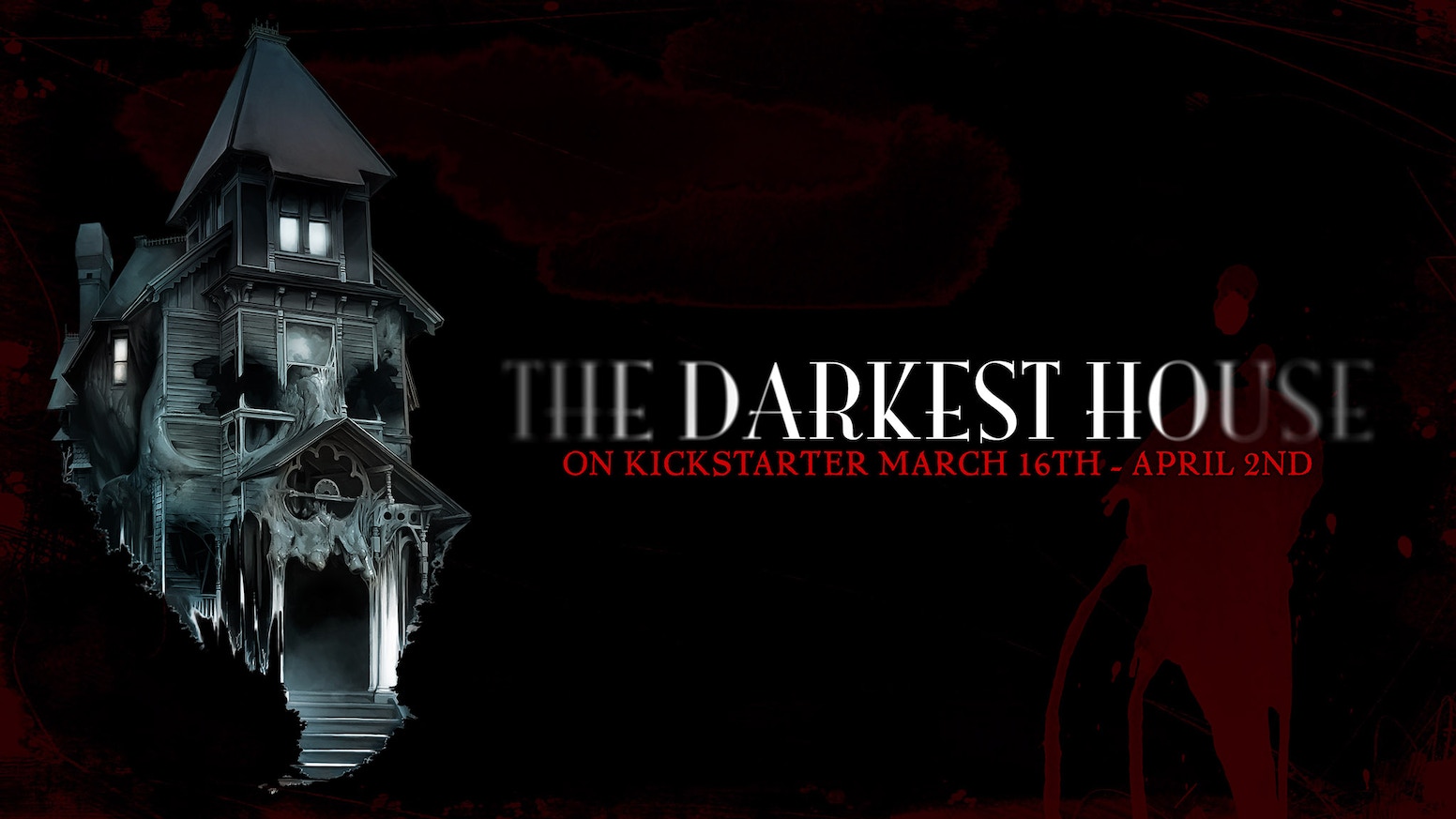 A descent into horror for 5e or any RPG that will make your campaign and characters better—optimized for an awesome online experience. The Darkest House FREE PREVIEW - That house on the outskirts of town, sitting empty behind a crumbling wall. The one people whisper about. The one that

This looks really cool. I'm tempted to buy it for this year's Halloween episode for my online group.

Here's another take on the topic! The Darkest House Observations

Monte gives an overview of the House System: The core mechanic, boons and banes, accumulating doom, and one of the coolest and most ominous aspects of the system, the House die.