Pak raises his shield for protection and moves towards the now shaking bushes. As he closes on the plant he slashes at it with his katana. Pak then settles into a Tengu sword form preparing for the bushes to counter attack.

Grimsby takes heed of Silvi's warning. "Mauls no gud then." After a moment of thinking he digs in his pack, takes out one of the vials of alchemist fire, and hurls it at the plant in the middle. "This should work."

Etran’s Folly (Plaguestone)/Feedmill
Summer/Day 4/0905
Weather: Normal for the season (hot), no wind, no rain
Round 2

Mortimer drew his dagger and studied the bushes for a bit. He wasn’t sure, but they looked a little dry. Maybe fire would work well?

Silvi cast magic at one of the bushes to daze it. It seemed to push through most of it, though it did flinch.

Pakuten, however, did better. The tengu strode forward and cast daze as well, and the push seemed to writhe in pain and then slump, shivering.

Grimsby pulled out a flask of alchemist fire and threw it at the bushes. It exploded over the first bush and splashed on the others. All of the bushes seemed to scream in pain, and the fire seemed to do more damage than it should have.

The sagging bush seemed to recover itself. Two vines lashed out, one at Grimsby and one at Mortimer. The vine struck Grimsby (18) and stabbed into the dwarf, slicing open his skin. (9 slashing damage, 1 persistent bleed damage).

The fire from the alchemist's fire burned that bush even more.

The second bush shuffled up to Pakuten, striking out at both the tengu and Grimsby. The vine struck Pakuten hard (30, critical hit for 24 slashing), downing the tengu and leaving him bleeding on the ground.

The vine attacking Grimsby missed the dwarf, however. 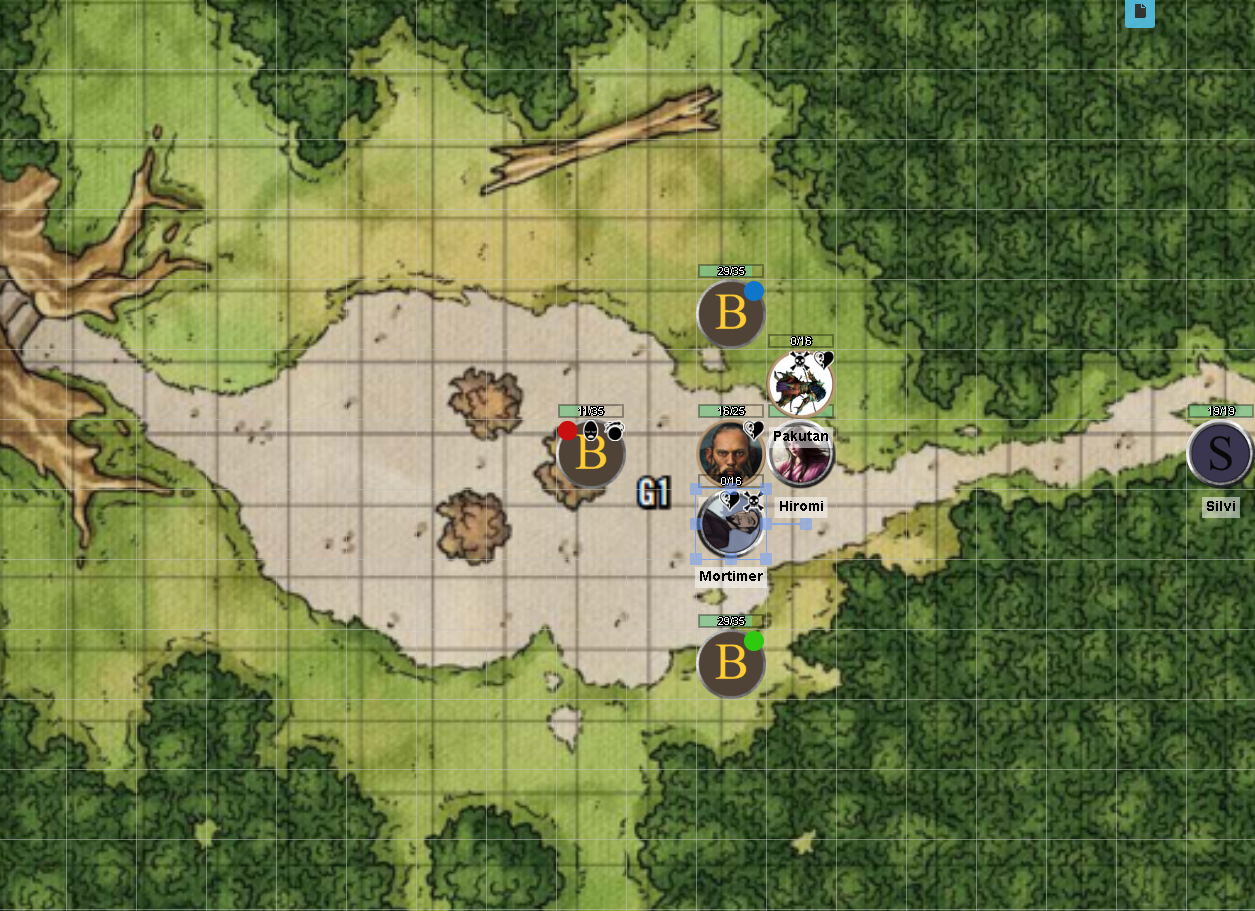 Pak continues to bleed as he lays unconscious on the ground.

"Aah! Pak! Morty!" cried Hiromi and she tried to drag Mortimer clear of the bushes and began to work to stop the bleeding.

Especially with Hiromi tending to Mortimer's wounds Silvi feels it is pertinent to focus all of her energy on Pakuten. The gnome says a prayer to Desna as she waves her hand in the air and then points to the tengu. She hopes he will be able to able to bring his own magic to bear before the bushes renew their attack.

The violence around the dwarf brings out the violence within the dwarf. He summons his rage, turns to the northern bush (it's the closest) and swings his maul wildly, somehow the bush manages to dodge.
"Don' let 'em surround us!"

OOC @VLAD the Destroyer: Unfortunately, bloodlash bushes have this ability.

Mortimer lies bleeding, tended by Hiromi. There is a lot of blood running from the man's chest, already ruining his outfit.

Etran’s Folly (Plaguestone)/Feedmill
Summer/Day 4/0910
Weather: Normal for the season (hot), no wind, no rain
Round 2.2

Pakutan continued to bleed out as he lay in the dirt.

Hiromi dragged the unconscious Mortimer back a bit from the fight and attempted to stop the lawyer from bleeding out.

Silvi prayed to her god, healing Pakutan, leaving him wounded, but conscious on the ground.

OOC: Not rolling the round just yet. Mortimer, Hiromi gave you an extra flat check for the bleeding, so go ahead and make another roll. Hopefully you can stop it! Pakistan, since your initiative count is after Silvi’s, yes, you can still act this round. You are prone and Wounded 1 next to one of the bushes. 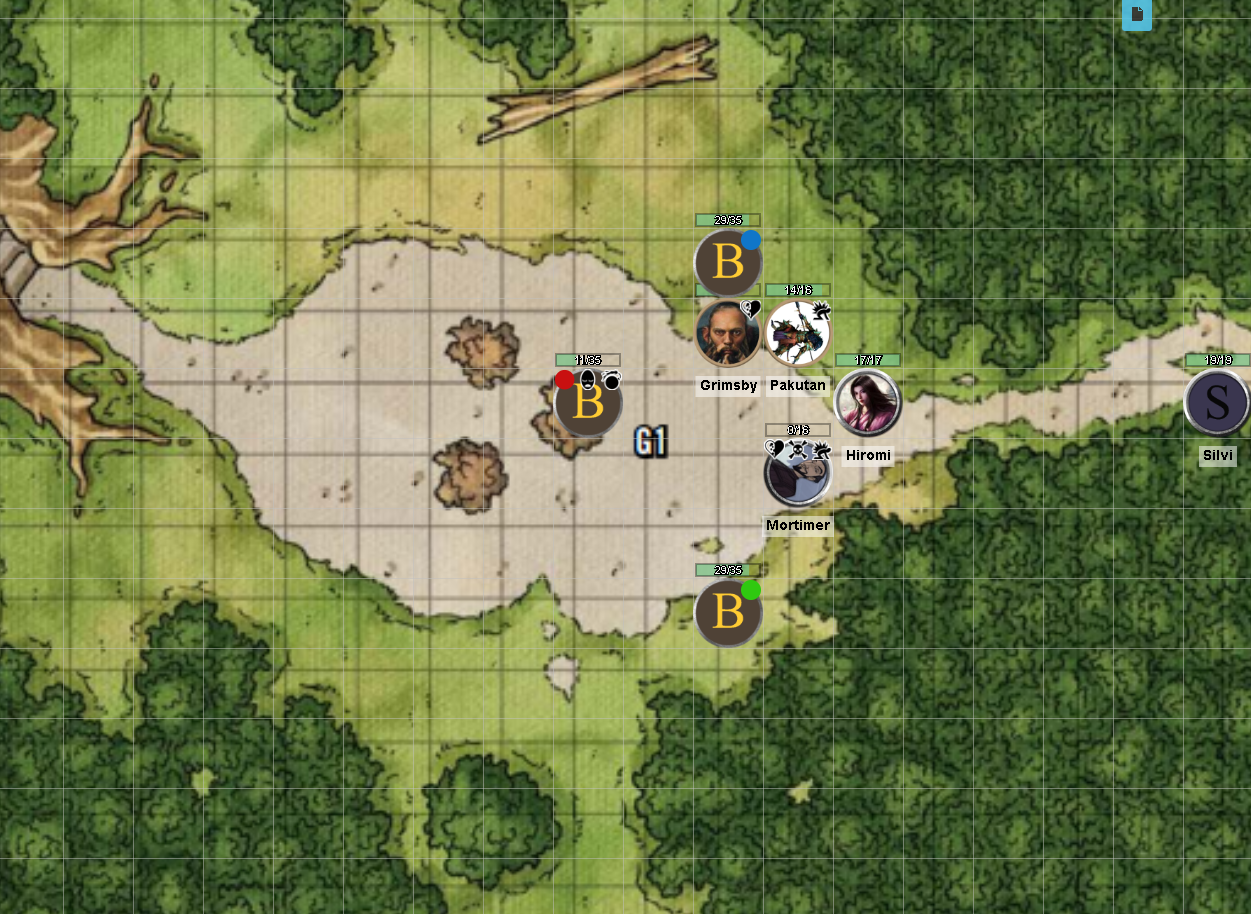 Pak is brought back to consciousness by Silvia's healing magic. He gasps and stands surveying the area. Seeing Mortimer on the ground being tended to by Hiromi he gathers his magic and speaks the words of a healing spell.

Whatever Hiromi was doing, Mortimer didn't stop bleeding. His clothes were becoming increasingly drenched in blood, until Pak used magic to heal his wounds.

Opening his eyes in shock, Mortimer gasps. Understanding dawns as he sees Hiromi and Pak standing over him, and finding his composure, the barrister nods at both in thanks.

Then he looks over at the murderous bushes.

"Burn it," he says coldly, not wishing to come close to the twisted vegetation again.

"I'm afraid that I'm not good for much here." said Hiromi unhappily, "My weapons would just put holes in their leaves, and I'd probably get myself killed."

After helping Mortimer to his feet, she tried to stay out of the way and asked about to see if anyone had any torches.

Etran’s Folly (Plaguestone)/Feedmill
Summer/Day 4/0910
Weather: Normal for the season (hot), no wind, no rain
Round 3

As the party recovered from the first bout with the bloodlash bushes, getting Pakuten and Mortimer back on their feet, the animated vegetation didn’t let up.

The bush to the north started to spin, its razor sharp vines extending and lashing out at Grimsby, Pakuten, and Hiromi. Fortunately they all managed to block or evade the assault.

The center bush continued to burn from the previous assault by the alchemist fire. It shot roots out along the ground toward Grimsby. Its tendrils tried to delve their way into his open, bleeding wounds, but the dwarf managed to kick the roots clear. (Grimsby rolled a 20 Ref)

The southern bush tried to do the same, but more effectively (Grimsby rolled 12 Ref), getting thirsty roots into Grimsby’s cuts, sucking at the blood spilling from him (take 1 bleed damage). It seemed to close some of the wounds the plant had taken. 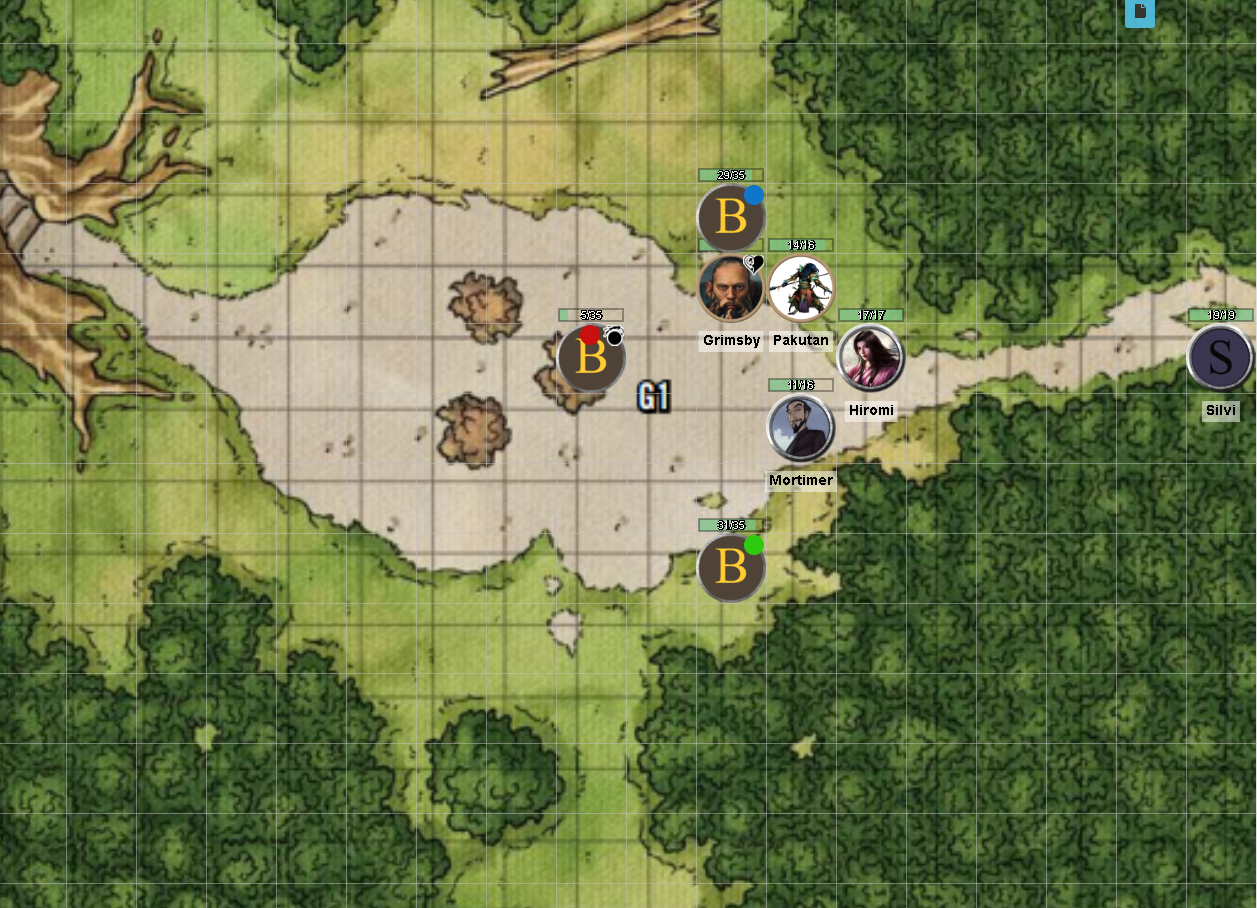 Resigned that she would probably die, she drew her rapier and dagger, sighed at their pointy ends and poked at the bushes to no avail.

Pak raises his katana and infuses it with his magic, the weapon begins to glow with power. He slashes at the closest bush but having just been revived he falters and misses with the attack. Pak then raises his shield to fend off the counter attack from the bushes.

Following up on his own advice, Mortimer starts rummaging through his pack and rapidly produces five torches as well as flint and steel. Not the best at this skill, the former barrister nevertheless starts lighting one torch, hoping to use it to light the others and hand them out to his companions.

It's very slow, however, so in his desperation he calls for aid.

"Some help would be appreciated," he says matter-of-factly.

Seeing Mortimer struggle to hold a bundle of torches and strike his flint at the same time, Hiromi wished that she'd waited before poking the bush. "If I'm not dead, I'll be there in a second!" she called over her shoulder.