Banned
Want a character that can cast and attack in the same turn? One that gets three weapon attacks quicker than the Fighter? Look no further! There's also a third variant that trades defence for utility, but oh my, what utility it is!

How they work: Haste
Haste is the lynchpin tying this build together, but we're not going to get it before level 10 at earliest. Fear not though, the build is still solid before that. Haste allows use to Cast a Spell and take the Attack action in the same turn. It also has a huge defensive and mobility boost.

Option 1: Hexblade 5/Sorcerer 5
The original build, inspired from work I did on the Favoured Soul that got Extra Attack. We start as a Sorcerer for Constitution saving throw proficiency, then go Hexblade for 5 levels, taking Pact of the Blade. This gets us our second attack at level 6. We switch back to Sorcerer after to pick up Haste. Side benefits include Metamagic, and possible access to Cleric spells.

Option 2: Hexblade 5/Wizard 5
A variation on the above, we trade Constitution saving throw proficiency for subclass features (Bladesinger is very nice), and Metamagic for Rituals and a better spell list. Unlike before, in this build we go straight Warlock, then straight Wizard.

You could also go Paladin with the Oath of Vengeance, since they get Haste as an oath spell at level 9, as well as Extra Attack.

However, I don't really see the benefit of getting Extra Attack on a build that plans to use haste to attack + spell, since the action that haste gives you cant be used to cast a spell or to make more than one weapon attack.

Banned
For when can't, or don't want to, cast spells. But a key point is these have enough spell slots to Haste every combat, unlike Paladins.

I like the Beefy gish builds, but the mobile skirmished gish builds are my favorite.

For that, I would pick the Hex/Wiz, and I also actually wonder about Hexblade/Swashbuckler (GFB+SA+HexCurse+Hex, and CHA to Atk, Dmg,Initiative), and Swashbuckler/Bladesinger (SA+GRB, Bladesong, bonus speed, cunning action, and eventual haste means extreme mobility, and creatures you hit can’t opportunity attack you, just for a start.)

Yunru said:
Option 2: Hexblade 5/Wizard 5
A variation on the above, we trade Constitution saving throw proficiency for subclass features (Bladesinger is very nice), and Metamagic for Rituals and a better spell list. Unlike before, in this build we go straight Warlock, then straight Wizard.
Click to expand...


If going Wizard (Bladesinger), level 6 will get an extra attack, which can save you from needing to take Pact of the Blade and spend an Invocation. Plus this way it's with any attack, not just your pact weapon. I'm still on board with Warlock to get the short rest slots for Haste, this just frees up your Pact. If you go Pact of the Chain and spend that invocation slot on Gifts of the Ever-Living (or whatever it's called form XGtE) you can have a familiar for advantage in combat and maximize all healing on you.

FrogReaver said:
i like fighter / sorcerer for a Gish.

Yunru said:
You need to have a Spellcaster level of 6 for Haste each combat
Click to expand...


I prefer Fighter 2 Sorcerer X as my basic gish.


So you could do it by level 8, but it costs all your metamagic and spell slots for that level.

Yunru said:
So you could do it by level 8, but it costs all your metamagic and spell slots for that level.
Click to expand...


Sure but I wouldn't want to with that build. I like that build because it can do good melee damage when desired but can also throw 2 fireballs out at the start of the fight while can down right end many encounters instantly. Booming Blade + Quicken Booming Blade is a solid combo.

That said a hexblade sorcerer is downright scary as well. Haste + Quicken Booming blade can give 4 greatsword attacks and you can start doing that at level 10.

You get good damage, with booming blade + sneak attack + running away.
Sneak + subtle + magical ambush (+suggesting) = win many battles before they begin.
Add in haste, and you can use it for a strong off-turn attack as well and make good use of that extra speed.

This thread makes me wish that my Swashbuckler/Bladesinger was more focused on being an awesome Gish, and less of a(n intentionally) frantic mess, with resources spent on crossbow stuff, and alchemy and tinker tools, and being good at haggling and training Arcana for easier access to enchanting.

I haven't actually thought before about how he would look if he were focused first and foremost on combat. I would never actually change him, but it's a fun thought experiment.

Point buy, standard value.
Feats and MC allowed.
Bonus feat at level 1.
+1 any stat when feat chosen at ASI class levels.
Flanking rules on.
Familiar is a wolf in actual game, might skip for optimized game, in favor of standard owl.
Rapier and dagger can be use for TWF without feat.
Magic Item crafting mostly per Xanathar's, with some different processes involving researching a formula, and first making or buying a scroll, and skill checks required to not waste time and resources. Character WILL have an uncommon magic item by this level, that let's him cast through it, and has 3 charges and casts Absorb Elements. Eventually it will let him cast Counterspell and Dispel Magic, but only if he is the target of a spell, or within reach of the target of the spell or of the effect he wants to dispel.

Wizard spells: Booming Blade, Green Flame Blade, Lightning Lure, Absorb Elements, Mage Armor, Hideous Laughter, Prot Good and Evil, Magic Missile, Longstrider, and some rituals (esp find familiar). Absorb Elements gets dropped once the weapon comes online. Longstrider is out of combat mostly, to give him super-Olympian runner speed when he really needs it and is willing to burn a spell slot and at least one Bladesong for it.

What I'm not sure of: Is Dual Wielder worth it? The real character has Crossbow Expert and Skilled. This version would have Mage Slayer (his focus is killing casters, and as a gnome rogue he is very good at it already), and either War Caster, Dual Wielder, or a "half-feat"?

Also, I chose Whip as his Bladesinger extra weapon. Mostly, it lets him have that slight boost in target options. With Dual Wielder, it becomes more useful.

For a melee combat specialist, is more than 4 levels of Wizard actually worth it? Rogue is really, really good, but the higher level stuff is less important for a combat focused character. Then again, wizards aren't adding that much to melee combat. Haste is there, but is there anything else that actually is necessary? I'm not sure extra attack is actually better for this build than Booming Blade, especially if I focus on Rogue so I get that sweet taunt ability later on. I want to be able to hit hard at will, and then move away to either not be a melee target, or be chased and take more of their HPs when they move.

Is two levels of fighter worth it, for Action Surge a few times a day?

As long as I have only level 1 spells, is there any reason to wear armor instead of using Mage Armor? Studded Leather is 1 less armor, after all. My AC with MA is 16, which is good for a rogue.

I don't know about classes and such, but I can tell you with high confidence that your githiest gish better be race: gith! 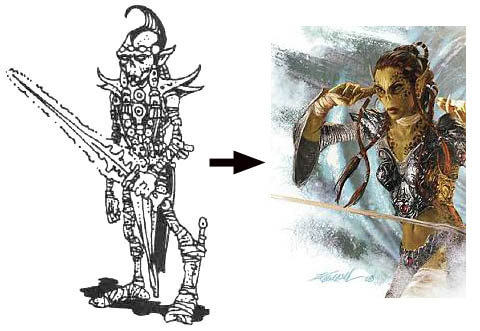 Banned
I just upped my internal value for the Hexblade 5/Lore Bard 6.
Find Steed combos nicely with Haste.
And at higher levels, you can occasionally run Greater Invisibility instead of Haste for an invisible mount.

Mistwell said:
I don't know about classes and such, but I can tell you with high confidence that your githiest gish better be race: gith!

Jun 3, 2022
IwouldprefernotTo
I
M
D&D 5E Can I salvage my gun-wielding warlock?

E
D&D 5E Drow Wizard with a sorcerer dip. Which class to start in at 1st level?