The Psychedelic Fantasy of Troika! Is As Weird As You Want It 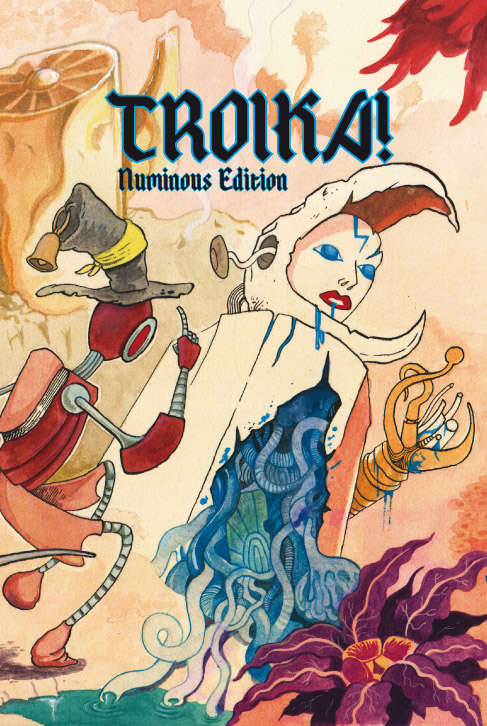 Most fantasy RPGs fall somewhere on the spectrum between high fantasy and low fantasy. Different editions of Dungeons & Dragons have been in various spots on this line. There’s a third category that’s seen a comeback in the past few years; weird fantasy. Games like Dungeon Crawl Classics and Numenera have injected a sense of wonder and terror into their worlds that connect to some of the stranger entries in Appendix N. Melsonian Arts Council are one of several indie publishers that have decided to go full speed into the weird. The most famous of their games is Troika!, which I first picked up as part of the massive Black Lives Matter bundle of games from the summer of 2020.

Things get weird right off the bat as players randomly roll their three main stats: Skill, Stamina and Luck. Then the players randomly roll their background, which is a little bit like their class but also helps to shape that particular table’s version of Troika! Players are encouraged to take the punchy paragraphs included in each of the 66 backgrounds and run with them. Why do you no longer wear the spiked brass armor of the Chaos Champion? Why are you the only one who remembers your kingdom? How did a lowly goblin catcher get mixed up in all this? These are all great session zero questions or ones that can be answered through play.

The flavors of the backgrounds in the book point to a fantasy tale that’s more like Labyrinth, The Dark Crystal and original versions of fairy tales. The art in the book adds a psychedelic layer of inspirational strangeness on top of that, leaving a feeling of an odd illustrated fantasy book from the 70s that’s been left in a basement. The art is not only evocative but also pushes away a lot of preconceptions that many people have of fantasy games. This is the game for folks who have bristled against the idea that magic has strict rules for spell slots or uses per day.

Which isn’t to say Troika! is a free for all. There’s a solid, simple rule set underneath all this strangeness. Skill use features 2d6 under the character’s Skill + an Advanced Skill. Combat is an opposed 2d6 roll where whoever wins does damage to the opponent in melee range and a skill test for ranged combat. The most interesting part, and I never thought I would say this about an initiative system, is the initiative system. The GM puts tokens in a bag for all the participants and an End of Round token that resets the bag. This gives battles a little bit of chaos, a little bit of card counting strategy and keeps players on their toes.

Magic also works fairly simply. Players pay a Stamina cost and roll a Skill Test to cast the spell, which comes from an evocative skill list. Double ones always succeed, while double sixes put the spellcaster at the mercy of the Oops! Table, which is a chaos mage table worthy of the out there setting. Unfortunate wizards might turn into a pig, might turn everyone else into a pig or could be zapped off to an entirely different Sphere which might result either in a new character or a chance for players to go Sphere hopping to get their friend back.

Spheres are what the game calls settings. Want a world of Sultans and sandworms? A kingdom with some courtly intrigue? How about some dinosaurs before dinosaurs? they can be great for groups who need a little more guidance or elements that can be smashed together. The company has been open about all sorts of hacks for things like settings, new backgrounds, new spells and more.

Troika! Offers a fun look at fantasy unchained like a long forgotten movie performed by Jim Henson and directed by Terry Gilliam experienced at 3 AM after a long night of questionable choices that turned out alright.

If you enjoyed this review, please consider using the affiliate links within to purchase this game.

Many of the works within can be found in this January 2020 Bundle of Holding with proceeds going to Direct Relief to fight the effects of COVID-19.
Last edited: Jan 18, 2021
Click to expand...

Be aware that this can also be found as part of the Croatian Earthquake Relief Bundle (affiliate link) currently up at DriveThruRPG.
Last edited: Jan 18, 2021

Nope, it's a roll under system.

typo?: "while double ones [sixes?] put the spellcaster at the mercy of the Oops! Table,"

Curious what other TTRPGs are out there that would fit into this "weird fantasy" category.

Sir Brennen said:
Curious what other TTRPGs are out there that would fit into this "weird fantasy" category.
Click to expand...

Lamentations of the Flame Princess has billed itself as "weird fantasy role-playing" for a while now. Their basic rules are free, but I'd recommend taking a look at their free adventure Better Than Any Man to really get a taste for what their products are like (or read Endzeitgeist's review).

Sir Brennen said:
Curious what other TTRPGs are out there that would fit into this "weird fantasy" category.
Click to expand...


Talislanta's pretty strange in many cases, specifically trying to avoid Tolkienian fantasy (tagline was 'No Elves' for a while). Tekumel specifically avoids European referents, drawing on South Asian and Mesoamerican inspirations, and adds in a heavy dose of science fiction. They're both more 'exotic' than 'surreal' though. Yoon-Suin is an OSR title inspired by Nepal.

Over the Edge combines espionage and science fiction and is pretty surreal but has a modern setting so it may not be what people here are looking for. Unknown Armies is a modern occult-themed game; it's pretty weird, but has some dark themes. The Dying Earth RPG is fantasy-themed (albeit set in the far future) and has a lot of unusual spells and creatures. (It's based on the work of Jack Vance, which had a strong influence on D&D--it's where memorized spells come from.) It has something of a different feel than a lot of RPGs, with a social combat system where you attack people with mordant wit.

Fair warning--it's very well done IMHO, but Lamentations of the Flame Princess puts a lot of emphasis on being bizarre and 'extreme' and tends to be on the gory/edgy side, with quite a bit of graphic sexual content. Character mortality also tends to be high. Cha'alt is even further in the same direction.

robowieland said:
Most fantasy RPGs fall somewhere on the spectrum between high fantasy and low fantasy. Different editions of Dungeons & Dragons have been in various spots on this line.
Click to expand...

Every edition of D&D is squarely high fantasy, simply because of levels. (Yes, D&D does low fantasy quite well... at level 1!). At most you can argue whether one edition is slightly more or less high fantasy.

I loved playing Troika! in the PbP Yoon Suin adventure that @Ancalagon ran here about a year ago! Good to see it brought to the attention of others.

robowieland said:
Nope, it's a roll under system.
Click to expand...

yes and no - it's roll low for skill checks unless it's an opposed roll (2 people fighting for example), in which case you want to roll as high as possible, and a double 6 is a crit.

JustinCase said:
I loved playing Troika! in the PbP Yoon Suin adventure that @Ancalagon ran here about a year ago! Good to see it brought to the attention of others.
Click to expand...

Thank you for the kind words I still need to wrap up and publish that adventure though...

The Troika! system is pretty robust. I think it would do great to run warhammer.