The RPG Origins of Star Control

Star Control: Famous Battles of the Ur-Quan Conflict, Volume IV or just simply Star Control was a science fiction video game developed by Toys for Bob and published by Accolade in 1990. Star Control was primarily a simple space exploration and combat game, but its sequel is widely viewed today as one of the greatest PC games ever made. At least some of the credit for the game's goes to the designer Paul Reiche III, who also just happened to previously work at TSR. A snapshot of a character sheet in another publication gives a hint as to Star Control's origins rooted in Reiche's early access to another tabletop role-playing game. 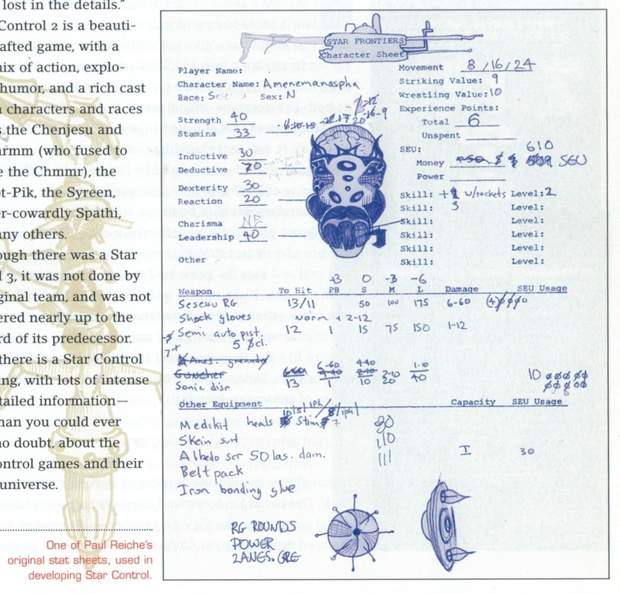 "We wanted to do more than just whip out more ships and rule variants," said Reiche in High Score: The Illustrated History of Video Games, "so we thought, 'Let's try a science fiction adventure role-playing game." Wikipedia elaborates on how the game worked:

Star Control II added a large number of species and ship types to the already diverse cast and replaced the first game's strategy-based scenarios with a story-driven space exploration adventure game that included diplomacy with the inhabitants of the galaxy, some resource gathering sub-sections, and instances of the space combat of the first game whenever diplomacy fails. As typical of the adventure game genre, the player must explore the game world with little direction and make discoveries and connections independently. Interaction with the various alien species is a chief part of the adventure game; the backstory of both the species from the first games and new ones were fleshed out considerably. There are hours of dialogue, each species bringing out their characteristic conversational quirks, music, and even display fonts.
Click to expand...

One of the main villains of Star Control was the Ur-Quan. "I'd seen an article in National Geographic about predatory caterpillars in Hawaii," said Reich. "There was a picture of it hanging and grabbing a moth from above. I was fascinated by the concept of a creature that clung to the ceilng and hung down over you." The Ultronomicon Wiki describes them as resembling:

...externally a brown, 10-meter-long and 2-meter-thick variation of the predatory caterpillars native to Earth's Hawaiian Islands. They have long, multisegmented bodies with four arms protruding from the frontal segment; they also have clawed legs on the posterior section of their bodies, which they use for clinging to the ceiling, while the anterior legs are longer and can function as grippers and manipulators.
Click to expand...

Arne at Querolous noted a similarity between these sentient caterpillars and another species from a tabletop role-playing game, Star Frontiers:

Star Frontiers was a science fiction role-playing game from TSR that attempted to repeat the sucess of Dungeons & Dragons. The basic game setting was an area known as "The Frontier Sector" where four sentient races (Dralasite, Humans, Vrusk, and Yazirian) had met and formed the United Planetary Federation (UPF). Players could take on any number of possible roles in the setting but the default was to act as hired agents of the Pan Galactic corporation in exploring the Frontier and fighting the aggressive incursions of the alien and mysterious worm-like race known as the Sathar.
Click to expand...

And who are the Sathar?

Sathar are long, worm-like creatures. Their bodies are divided into segments, like an earthworm's. They do not have a skeleton. Instead, they support their bodies hydrostatically, by pumping liquid into the segments so they become hard. A shiny, clear slime coats their skin. Scientists believe they are warm-blooded, but no live specimen has ever been studied.
Click to expand...

It may well be that the two invasive alien species have more in common than just appearance. And for that we turn to someone who was at TSR and later worked on Star Control.

Who Is Paul Reiche III?

Reiche was a childhood friend of early Dungeons & Dragons (D&D) artist Erol Otus, and became interested in gaming as a teen. He and Otus played role-playing games together and released a few small games in the genre. Eventually, both wound up at TSR (the then publisher of D&D). They made contributions to the evolving game and other games by TSR, Otus with artwork, Reiche with game design (primarily on D&D and Gamma World). Reiche's credits as developer include Isle of Dread, Slave Pits of the Undercity and Assault on the Aerie of the Slave Lords, and The Ghost Tower of Inverness, and he also contributed to Gary Gygax's Legion of Gold for Gamma World. Reiche also invented the Advanced Dungeons & Dragons race of Thri-kreen Mantis warriors, which debuted in the second set of Monster Cards.
Click to expand...


The Strong National Museum of Play explains how Reiche drew on his experiences in both the tabletop and video game worlds:

The histories of tabletop games and video games are deeply woven together. Analog and digital games often share similar mechanics (such as experience points) or similar settings (e.g. dungeon crawling). Many times in the past, game makers have ported titles from one medium to the other. And yet perhaps the most crucial connection between analog and video games lies in the personal biographies of many game designers, who often began work with board games before applying their skills to the digital medium. The career of Paul Reiche III exemplifies these close, often interlocking relationships between analog and digital game design, and the personal papers that he recently donated to The Strong demonstrate how his apprenticeship in designing tabletop games laid the foundation for his creative career in video game design.
Click to expand...

As a kid in the 80's, I was super into D&D and not at all into video games. This is still true to a lesser degree today. So, when I started learning that many RPG designers/developers moved back-and-forth from tabletop games to video games, it seemed super weird to me. I'm slowly coming to grips with the reality, and still have this mental block that the two genres are distinct.

It makes sense though, and perhaps some day I'll get over my tabletop bias!

I didn’t know about the RPG origins of Star Control, but I should have guessed. Those games themselves (Star Control and sequel) served as material and inspiration for my own RP games later on.

I remember playing Star Control II back then but I don't remember much about the game anymore.

I miss the PC races from d20 Future. I hope to see them being adapted for Spelljammer.

Sounds like the Ur-Quan have a fairly high degree of similarity with David Gerrold's Chtorr.

We played the hell out of the original Star Control melee mode in college (Hierarchy FTW!). And Star Control 2 is both one of the finest CRPGs and one of the funniest science fiction novels ever written.

It's a pity there is such shenanigans getting the new game out. The universe is amazing and spent many of time dueling with my buddies back in the day.

on a happy note

It is available for free legally so you can see for yourself.

I feel compelled to point out that the game is not widely regarded as one of the greatest games ever made, and in fact most gamers have no idea what Star Control is, much less played Star Control 2.

The author is pointing at a 2013 article about PC games, while ignoring all of the articles about "What are the best games ever" that come out routinely and pretty much never list SC2.

To make it even more interesting, when you dig into the link in the articles he's referencing which claims SC2 was frequently listed, you find that it doesn't actually link to any metrics. You then find that the poll had some rather interesting restrictions in 2013 such as "You can't name games from the last 10 years" and "You can't name games unless you can purchase them today" (Which eliminates pretty much the whole Commodore 64 library and pretty much all of the titles that defined video gaming all the way up to today). Which I think it's a fairly safe bet that the Kotaku author had absolutely no idea that computers other than the PC had ever been popular, and that the PC only became ascendant in the early 90's after the C64 largely birthed modern video gaming.

In short, this is another poorly researched article, 30 second with the source should've given this author big red flags that what he was trying to source was the typical lazy journalism commonplace in video game journalism.

LuisCarlos17f said:
I miss the PC races from d20 Future. I hope to see them being adapted for Spelljammer.
Click to expand...


At least some of the SF races did get Spelljammer versions in the MCs. And the Alternity races had AD&D conversions in the late 2e issues of Dragon, in addition, the fraal had and entry in MC Annual 4.