D&D 1E The Secret "Historie" of the Gorgon, Lamia, and Su-Monster

In the previous article we looked at a book that was highly influential on the creation of the Advanced Dungeons & Dragons Monster Manual. But that book wasn't the only source where D&D's co-creator, Gary Gygax, diverged from traditional sources. Like the peryton, we can deduce the origins of another curious monster that is depicted in a unique way thanks to Edward Topsell's Historie of Foure-Footed Beasts. 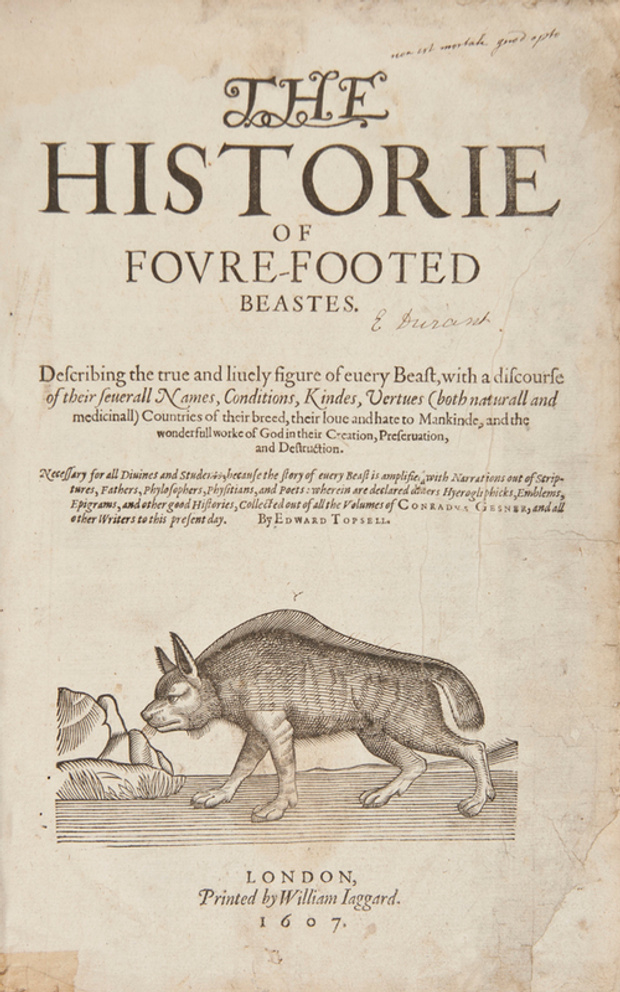 Although perhaps not as influential as Edward Borges' Book of Imaginary Beings, Topsell's Historie has made an indelible mark on D&D's monsters. This is most evident in the depiction of the gorgon.

The gorgon is traditionally associated with Medusa. In a rare reversal for D&D's obsession with categorizing the lineage of every fantasy beast, Medusa is the name of an individual, not a species. She was a gorgon -- along with her two sisters, Stheno and Euryale. All were depicted as having snakes for hair and a gaze that could turn a man to stone. And yet, somehow we ended up with this picture for the gorgon. What happened? 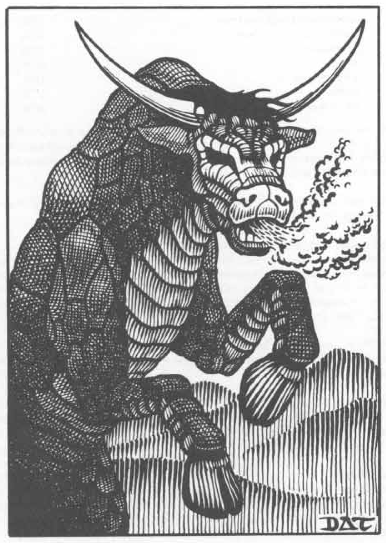 Edward Topsell happened. Or rather, Gygax may have read Topsell's book, The Historie of Foure-Footed Beasts:

Topsell's The History of Four-footed Beasts (1607) and The History of Serpents (1608), both published by William Jaggard, were reprinted together as The History of Four-Footed Beasts and Serpents in 1658. An 1100-page treatise on zoology, Topsell's work repeats ancient and fantastic legends about actual animals, as well as reports of mythical animals. Topsell, not a naturalist himself, relied on earlier authorities, most notably the Historiae animalium of the Swiss scholar Conrad Gessner. "I would not have the Reader," Topsell writes, "... imagine I have ... related all that is ever said of these Beasts, but only [what] is said by many." Topsell's work is remembered chiefly for its detailed and vigorous illustrations, including the famous image known as Dürer's Rhinoceros. The illustrations have been widely reproduced in many contexts, and Topsell's bestiary has been reprinted in various modern editions, usually in greatly reduced form.
Click to expand...

This massive tome, which you can read in its entirety without pictures at Scrbid or with pictures at Archive.org, contains a comprehensive compilation of beasts, including mythological creatures. The book was accompanied by detailed woodcuts, one of which was of a “strange Lybian Beast” or the “Gorgon":

Among the manifold and divers sorts of Beasts which are bred in Affricke, it is thought that the Gorgon is brought foorth in that countrey. It is a feareful and terrible beast to beholdd, it hath high and thicke eie lids, eies not very great, but much like an Oxe or Bugils, but all fiery-bloudy, which neyther looke directly forwarde, nor yet upwards, but continuallye downe to the earth, and therefore are called in Greeke Catobleponta. From the crowne of their head downe to their nose they have a long hanging mane, which maketh them to looke fearefully. It eateth deadly and poysonfull hearbs, and if at any time he see a Bull or other creature whereof he is afraid, he presently causeth his mane to stand upright, and being so lifted up, opening his lips, and gaping wide, sendeth forth of his throat a certaine sharpe and horrible breath, which infecteth and poysoneth the air above his head, so that all living creatures which draw in the breath of that aire are greevously afflicted thereby, loosing both voyce and sight, they fall into leathall and deadly convulsions. It is bred in Hesperia and Lybia.
Click to expand...

This description of an ox-like creature, along with the woodcut of the monster in the first edition of Topsell's bestiary, points to Gygax's inspiration for the gorgon.

RPG scholar Jon Peterson takes this thread further and connects the book to Ernst and Johanna Lehner's A Fantastic Bestiary :

"An iron-clad bull[ish] monster" with poison breath as described in the Dalluhn Manuscript is far too close to the glossary of the Fantastic Bestiary to be mere coincidence. However, by the release of Dungeons & Dragons, the description had been rephrased, and now Gorgon breath petrified rather than poisoned.
Click to expand...

Given the Fantastic Bestiary was published in 1969, it seems likely the gorgon's description was drawn from Topsell's tome. The description doesn't account for the scales, which seem uniquely attributed to Topsell's woodcut. The gorgon wasn't the only creature Topsell recorded that may have inspired Gygax.

The lamia, like the three gorgons, was traditionally an individual rather than a species. Ecohawk explains in his Monster ENCyclopedia series:

In Greek mythology, Lamia was a queen unwisely involved in a dispute with Hera over her husband's infidelity. Hera cursed her, causing Lamia to hunt and devour children, in the process turning into a horrible monster. It isn't clear what role Zeus played in Lamia's transformation but it seems that he gave her the ability to remove her own eyes and with it the gift of prophecy. Some versions of the legend have Lamia drinking the blood of children, or refer to vampire-like lamias (plural), who seduce young men to feed on their blood. Common to most lamia myths are the lamia's gluttonous thirst for blood, its general uncleanliness and limited wits.
Click to expand...

The portrayal of the lamia in the AD&D Monster Manual is something of a sphinx-like centaur. 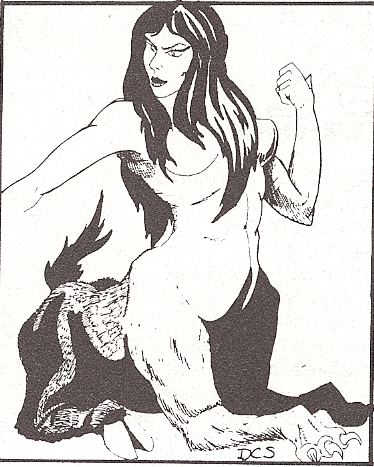 And while there were definitely some creative tweaks made by the artist, the same cloven hooves, bear fore paws, and female upper torso are apparent in the AD&D lamia portrayal. Topsell's description is accompanied by a woodcut:

...the hinder part of this Beast are like un∣to a Goat, his fore-legs like a Bears, his upper parts to a Woman, the body sealed all over like a Dragon, as some have affirmed by the observation of their bodies, when Probus the Emperour brought them forth into publick spectacle...
Click to expand... 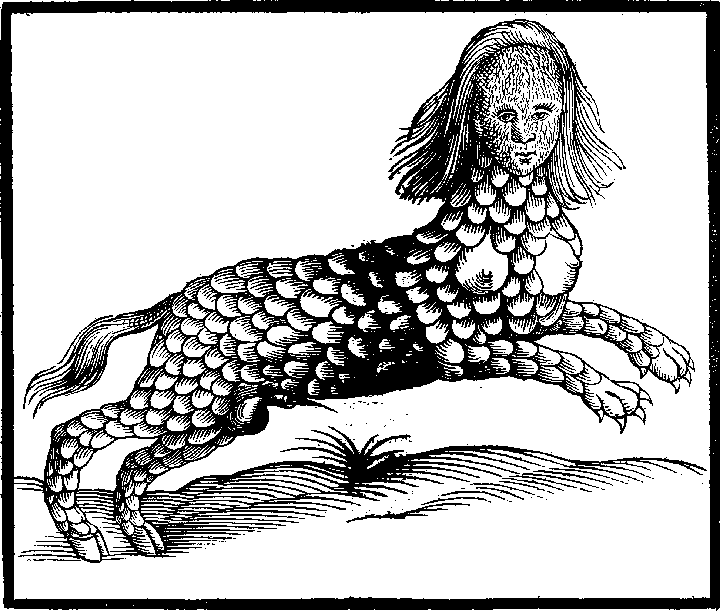 Of all the monsters covered in this article, the su-monster is the oldest. It first appears as a D&D creature in Supplement III: Eldritch Wizardry, which is credited to Gary Gygax and Brian Blume. Most likely though, the su-monster is a Gygaxian creation, inspired by A Fantastic Bestiary, published in 1969.
Click to expand... 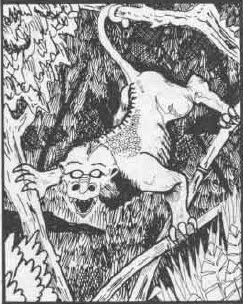 Peterson's article attributes the appearance of the su-monster to A Fantastic Bestiary:

While again, no illustration of the Su-monster is given, the text describes it as follows: "their bodies somewhat resemble a wasp-waisted, great chested hound. Their heads appear much like gorillas'. All four feet are prehensile and armed with long and extremely sharp nails as well."...Discoveries of unfamiliar animals in the New World captured the popular imagination in the sixteenth century, but often led to gross misunderstandings: the creature this illustration attempts to represent is the humble opposum, with its young clinging to its back. Early accounts called it the "su-monster," and thus the name entered Dungeons & Dragons. Because Eldritch Wizardry focused particularly on psionic powers, the Su-monster and its fellows employ them liberally.
Click to expand...

The illustration in A Fanastic Bestiary may well be from Topsell's book. He describes it thusly:

THere is a Region in the New-found World, called Gigantes, and the Inhabitants thereof are called Pantagones; now because their Countrey is cold, being far in the South, they clothe themselves with the skins of a Beast called in their own tongue Su, for by reason that this Beast liveth for the most part neer the waters, therefore they call it by the name of Su, which signifieth water. The true Image thereof as it was taken by Thevetus, I have here inserted, for it is of a very deformed shape, and monstrous presence, a great ravener and untamable wilde Beast.
Click to expand...

And in turn, that woodcut was taken from Andre Thevet's Singularites de la France Antarctique. 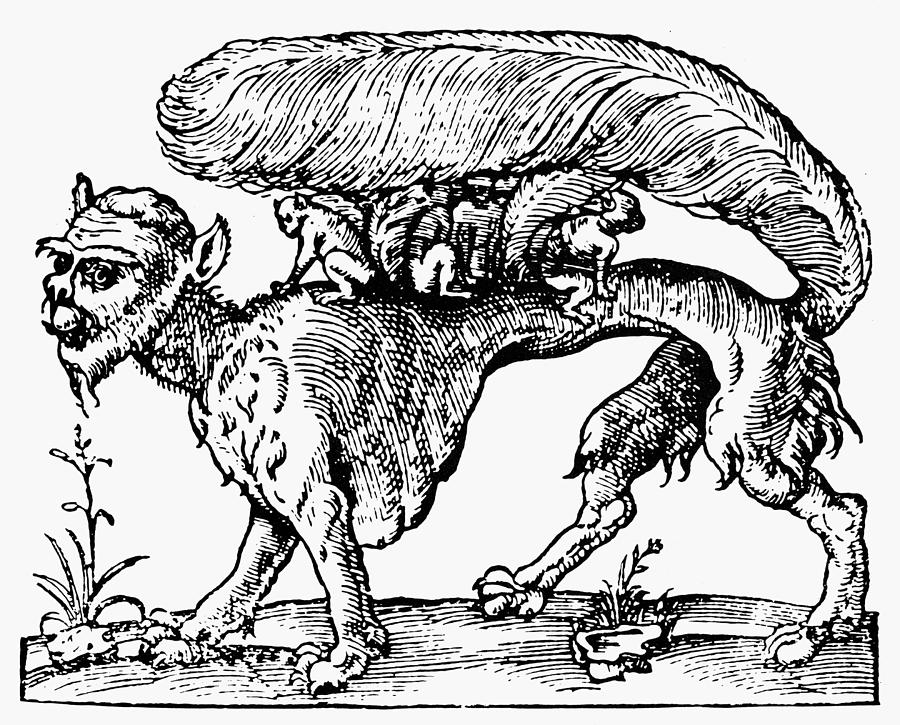 Was Topsell the direct source for some of these monsters? We have only this hint from Stephen R. Marsh, an early contributor to the Eldritch Wizardry supplement:

Some of the early monsters I did came straight from medieval bestiaries in the BYU library, FYI.
Click to expand...

Given that the su-monster appeared in Topsell's medieval bestiary, perhaps he was the original source after all.
Click to expand...

Thanks for the follow up, I mentioned this book in the previous article in reference to the Lamia and Gorgon, but was unaware of the Su monster relationship. I also really appreciate the wood cuts.

This is interesting! FWIW, I had always thought the Su Monster was the same as the thing living in the box under the stairs in Stephen King & George A Romero’s Creepshow.

I always looked at gorgon as an adjective for terrible. There can be all kinds of gorgons. There can be the gorgon sisters, gorgon bulls, gorgon knights, gorgon bob, gorgon king, etc. gorgon medusa was just the terrible Medusa.

D&D 5E Brainstorming: Getting Rid of the Monstrosity Creature Type
2 3

B
Slaying the Dragon: The Secret History of Dungeons & Dragons Review
6 7 8 9 10