Ben Reece (BR): With Starfinder starting a new season and TTRPG players always hungry to find the right game for them, how would you pitch the Year of Redemption’s Rise to a player ready to for a new story?
LINDA ZAYAS-PALMER: We really wanted to have the Year of Redemption’s rise be a season that would be uplifting. PCs are in the driver’s seat of making a better world. They are looking some of the skeletons in the Starfinder Society’s closet and asking: “What are we going to do about this?” But, of course, with any sort of reform, there’s going to be people who profited from that old status quo. You’re going to see those people coming out of the shadows. There’s a criminal organization with old ties to the Starfinder Society that’s going to get ferreted out. We’re also coming out of a previous season with a catastrophe known as the Data Scourge. There’s been events in the past seasons that have had a lot of people pointing their fingers at the Starfinder Society. The First Seeker of the Starfinder Society, Ehu Hadif, looks at this situation and asks, “Are we just going to let people fall apart? Or are we going to come together and listen to people’s voices and support the formation of new groups?” He’s picking the second choice. The PCs are going to come in on the ground floor of that. 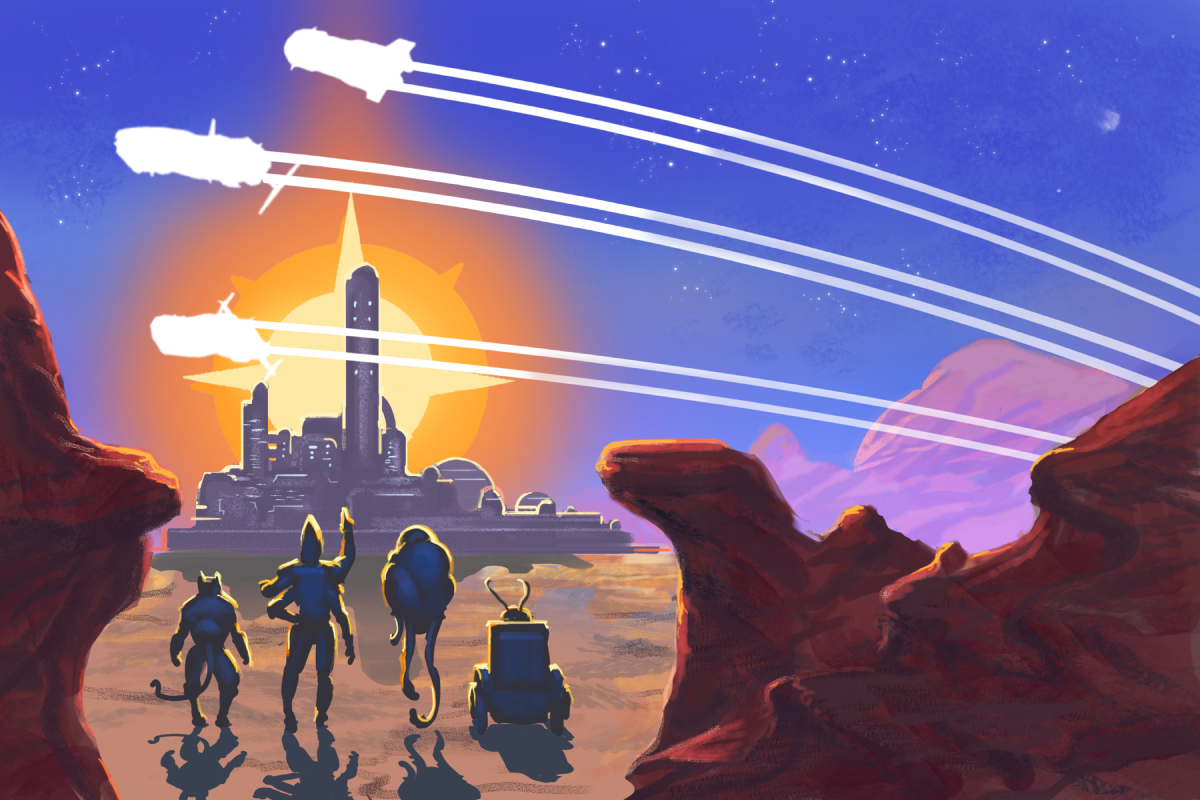 BR: We would certainly be interested to hear if there are political upsets amongst the factions. Is that something we could expect to see on the horizon?
JESSICA CATALAN: Right before the Year of Redemption’s Rise is when most of the suspicion and argument amongst faction agents is more common. When we pick up with Year of Redemption’s Rise, they’re already starting to come back together. But, in our first Scenario, #5-1: Year of Redemption’s Rise, you definitely still see some clashing and arguing between factions, and you have a chance as an outsider to come in and say “Do I want to side with one faction or the other? Do I want to try to bring them to a peaceful resolution? Do I want to just raise some hell and be a horrible person?” You can do that too! 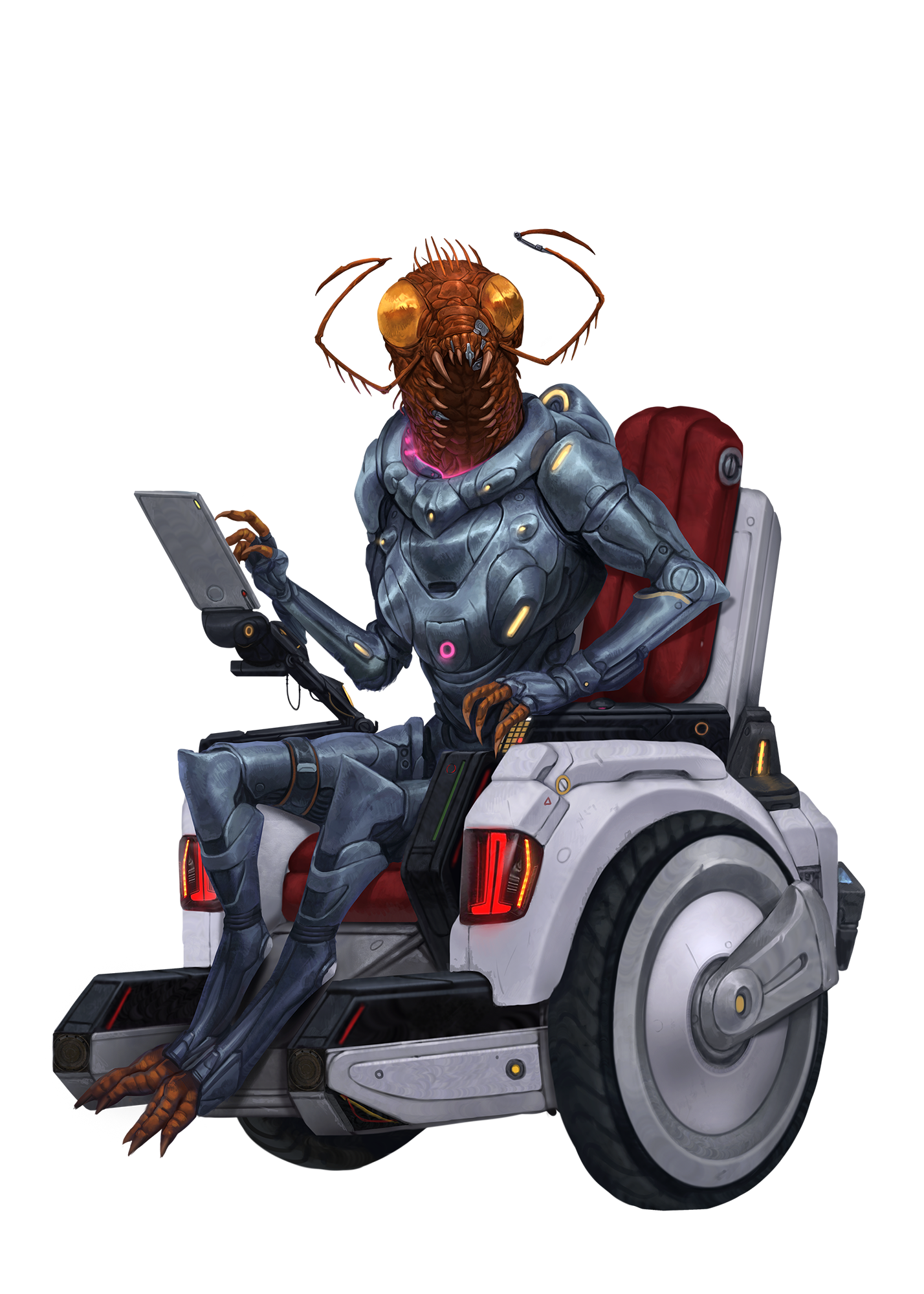 BR: One of the new factions, the Advocates, is apparently being led by Zigvigix, the augmented host shirren who inadvertently brought the Data Scourge into the Lorespire Complex. How is that affecting the acceptance, influence, and activity of the Advocates as a faction within the Starfinder society?
JESSICA: Members of the Advocates are a welcome addition, I would say, to the Starfinder Society’s factions. And no matter who you are as an in-game character, no matter what faction you are, and no matter if you trust the Advocates completely or not, the Advocates are still here for you. Even if someone is suspicious of them, they don’t really have any enemies right now. They’re more of a community-building force among the Society than they are of controversy. 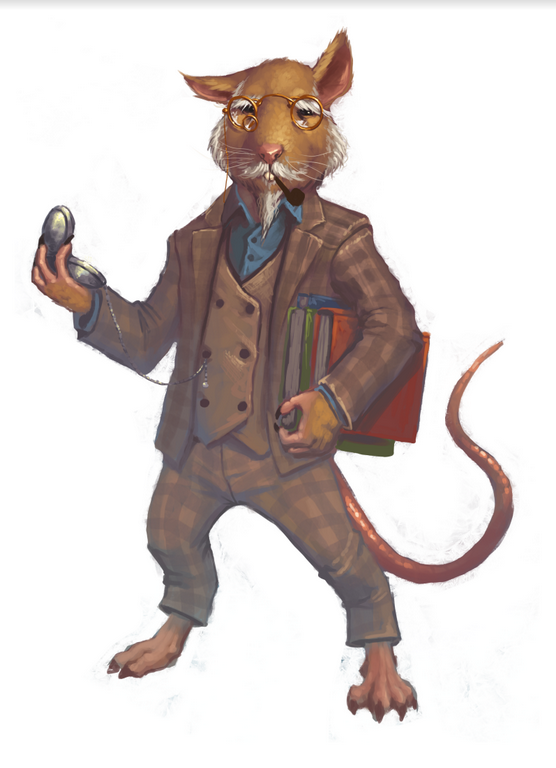 BR: What is another NPC that you’re particularly excited for players to meet?
JESSICA: In the aftermath of the Data Scourge, an anti-technological movement has swept through the Starfinder Society’s ranks. The movement is being led by Royo, a ysoki scholar who has been around since the first season of the Starfinder Society. Royo believes that information and a thorough education should be accessible to everyone, regardless of status, wealth, connections, or what planet you’re from. His beliefs have led him to often clash with the Dataphiles faction. Some members of the Cognates aim to eschew technology completely, but the faction itself focuses on a multi-disciplinary methodology. They believe that technology is a single tool in a well-stocked toolkit – and that over-reliance on a single discipline is closed-minded, dangerous, and ineffective. You’ll definitely get to see some of them in #5-1, where we introduce our new factions; and you definitely get to see some Dataphiles clashing with some Cognates.

BR: Is there something like this that you’re particularly excited for people to see, that you’re particularly proud of how it got put together?
LINDA: I have been having so much fun with one of the ones I’m looking at that’s still in development right now, which is a mech-versus-mech combat! The PCs get to jump into the driver’s seat of a giant mech and battle against an even giant-er mech in a giant hangar and just completely go all out! And for a mech, the scale of mech sizes STARTS with the 15-foot-tall honkers, right? That’s what you’re starting with. And then they go up from there! If you GMs out there have a Colossal mini sitting around somewhere, you might need to dust it off. Just saying.

BR: Are there other new writers you’re excited to work with? Is this the place that Pazio tests the waters for newer writers?
JESSICA: You can definitely expect to see new writers this year. I also run the Starfinder Bounties line, which exclusively uses new authors or authors who have never had a chance to run an adventure before. There are six total Bounties in the works right now: John Godek III wrote Bounty #1: The Cantina Job, which is already out. Michael Bramnik is the author of Bounty #2: Test Flight. Erin Roberts wrote Bounty #3: A Green Place. Bounty #4: Poacher’s Paradise is currently being written by Shan Wolf which is the first time I’m announcing that! Congratulations Shan! Both Erin and Shan are very talented Black authors, and I’m thrilled to be bringing them onto our Bounties line. 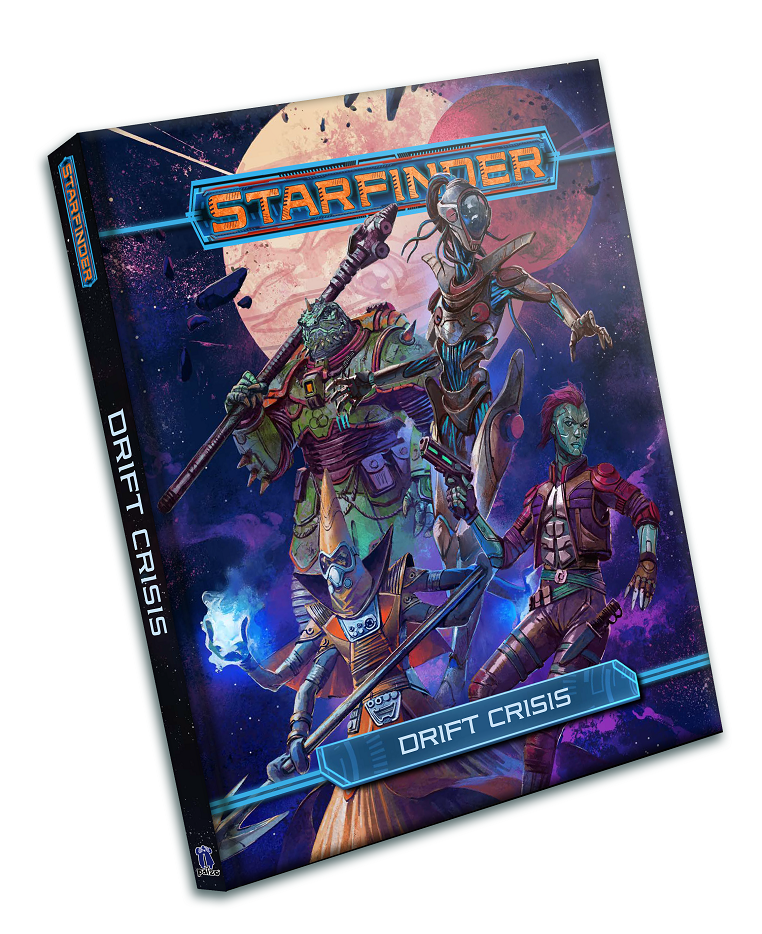 BR: Speaking of things to come – with the Drift Crisis due to launch about the same time as the Year of Redemption’s Rise, what influences of the Drift Crisis can we expect to see in the three Scenarios focused on that event?
JESSICA: Our first Drift Crisis scenario is actually our Starfinder Interactive Special, which Linda might be able to speak more to in a moment. But our first Starfinder Society Scenario involving the Drift Crisis is #5-4, Fragment of the Fourth. It begins by showcasing one of the ways the Starfinder Society can help the citizens of the Pact Worlds during the Drift Crisis. Beyond this, there’s two other Scenarios that focus on the Drift Crisis. One of them is mid-level and the other one is low-level. I really wanted to showcase the very different ways that you can interact with the Drift Crisis event. When we do go beyond it, yes you will definitely see some alternative methods of faster-than-light travel on display. I don’t want to spoil too much of the Drift Crisis’s themes or specifics, but I can definitely confirm we have some fun stuff to play with. If you’re looking for hints about what kinds of Drift engines and things you might be using; those things are kinda hard to get your hands on, and you might want to look into allies that could maybe help you get some of those harder-to-find technologies. 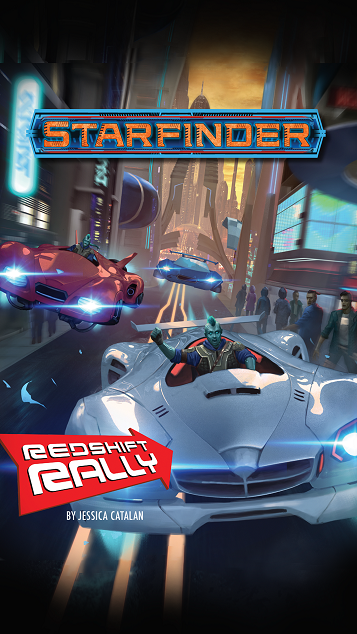 BR: Aside from the Year of Redemption’s Rise, what are you most excited to put your name on this year?
JESSICA: I think the one that I’m most excited for (that’s announced) is Redshift Rally. It’s focusing on the 20th anniversary of the Absalom Run – racing in Starfinder! 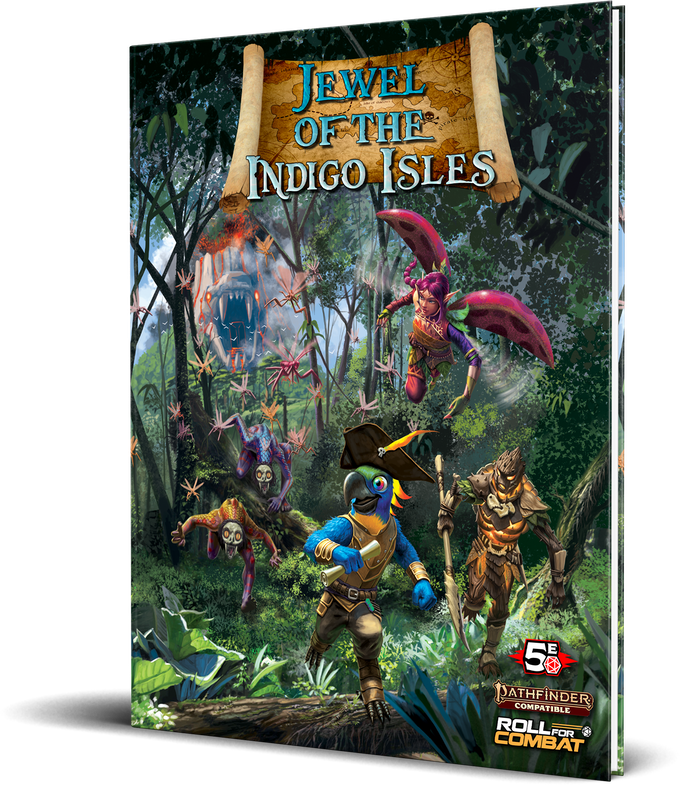 BR: Will we get to get some use out of the vehicle mods we see in Tech Revolution?
JESSICA: I wrote the vehicle mods, actually! And there are some new vehicles, and you may get the chance to stick mods on vehicles.
LINDA: I’m super excited about the Jewel of the Indigo Isles Adventure Path, which is a Kickstarted Adventure Path written by Patrick Renie, Ron Lundeen, and me.

BR: Well, that’s all the questions I have. Thank you so much for your time!
LINDA: Thanks for having us!
Click to expand...

If I was Disney, or Paramount, I would worry very much other company adquiring the rights of Starfinder to produce a rival for Star Wars, or Star Trek, franchise.

LuisCarlos17f said:
If I was Disney, or Paramount, I would worry very much other company adquiring the rights of Starfinder to produce a rival for Star Wars, or Star Trek, franchise.
Click to expand...

If any company could do justice to Starfinder in a live action space, I would want it to be the Jim Henson studios. Starfinder is the closest game I've ever played to feel like living in Farscape.

Supporter
Me: I don't think anyone could adapt Starfinder properly...


Fritterfae said:
If any company could do justice to Starfinder in a live action space, I would want it to be the Jim Henson studios.
Click to expand...

Also me: TAKE ALL MY MONEY!

I really like the Starfinder system and would love to play more. Unfortunately, I find the pre-written adventures don't hit the right tone for me. None of them really appeal. Too light and goofy for my tastes. Eagerly awaiting Grimmerspace to see if that can give me what I want.

Hey just gonna throw this out: Starfinder is an amazing setting, but I think it would be much better paired with a system, like, say, Savage Worlds (hint hint). Pinnacle please get the license to Savage up Starfinder!

Fritterfae said:
If any company could do justice to Starfinder in a live action space, I would want it to be the Jim Henson studios. Starfinder is the closest game I've ever played to feel like living in Farscape.
Click to expand...

Farscape?!? Why didn't I think of that. Yeah, Starfinder seems a perfect fit for that sort of tone (and Guardians of the Galaxy in that vein as well).

Green Onceler said:
I really like the Starfinder system and would love to play more. Unfortunately, I find the pre-written adventures don't hit the right tone for me. None of them really appeal. Too light and goofy for my tastes. Eagerly awaiting Grimmerspace to see if that can give me what I want.
Click to expand...

My stuff tends to be darker, from my FREE one-shot Rude Awakening, T. H. Gulliver's Dead in Space one-shot horror series, Rogue's Run, a two shot module. Most of my supplements include one-shots to explore the new rules. I'd say my stuff is closer to survivor horror - not light or goofy at all. I'm Gamer Printshop on DrivethruRPG (You won't hear a skittermander mentioned in any of my stuff!)

Currently working on a series of Mini Setting Guides, one star system at a time for my default third party setting - the Kronusverse and Colonial Space. My last published product is The Planet Builder with tables created by an astrophysicist - create custom, entire, scientifically viable star systems from stars, planets, moons, orbits, trojans, belts, planetary cores, atmosphere, hydrosphere, weather, lifeforms and more - everything, and a stat block for the entire system.