They Came From Beyond The Review! 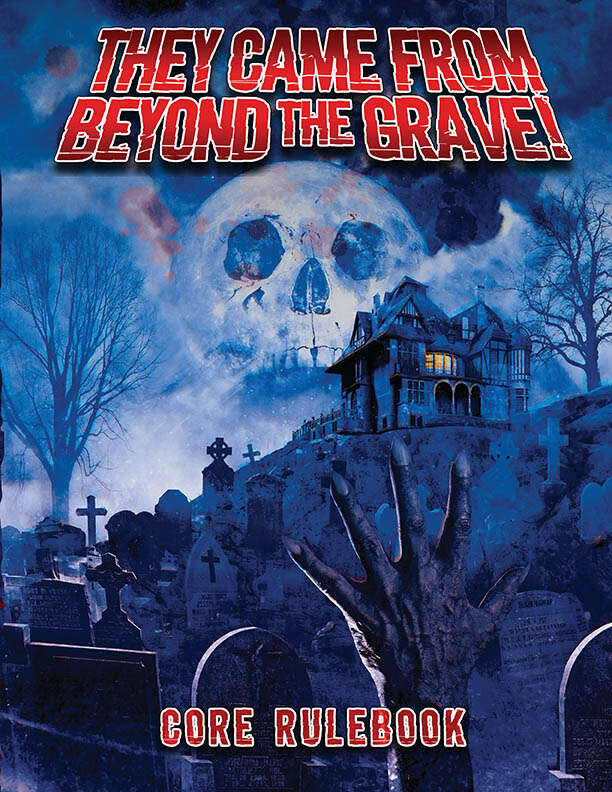 There are two nerdy products that I am proud of that came from my region of the US. The first, of course, Dungeons & Dragons. We wouldn’t be here on this website without that game. The other is Mystery Science Theater 3000. It turned a childhood of HBO afternoons and midnight movies into a life-long love of terrible films that were still quite entertaining with the right perspective. Onyx Path Publishing also apparently has a love for these cheap genre flicks as evidenced in their They Came From Beyond game line. The company sent me their recent entry, They Came From Beyond The Grave to see how I might evaluate it. Let’s head into the theater together and riff on this review.

They Came From Beyond The Grave is a Storypath game seeking to emulate cheap 70’s horror. The films on display here mainly come from Hammer Horror and its schlockier siblings Amicus and American International Pictures. These films were cheaply made quickies full of bad effects, cheap sets, wooden actors and maybe one or two slumming stars who might protest about doing the film but still cashed the check. These movies tend to be more spooky than scary but have their fans because they’re doing a lot with a little.

The Storypath system has become the house standard for Onyx Path. It’s a medium crunch system that collects successes like it’s Storyteller predecessors, but those successes are now spent to activate various narrative effects or set up difficulties for later roles. The Origin/Path/Role setup is simplified into five archetypes: the innocent Dupe stumbling into horror, the cool Hunter saying something badass before blowing away a monster, the mysterious Mystic hinting at a bigger threat, the Professor studying the creature and the Raconteur cracking wise to a witness.

There’s a metacurrency called rewrites which lets players bend the narrative to their will, though in this version of the game the framing device for the mechanic are the bad parts of the movie. Players can spend these points to break out of a prison because it’s a cheap set or get a bonus to a rousing speech because it's the one speech the actor rehearsed. Quips follow a similar setup as catchphrases that players use to gain bonus during the game. MY favorite optional rule turns the title of the movie everyone’s playing into a Quip to mirror how these films slipped the title into the script at least once.

To be honest, I bounced off of They Came From Beneath The Sea for elements that are still slightly present in this edition. Storypath, while a fine system, is a bit heavy for a game built for one-offs or short campaigns. Picking pre-built characters like Feng Shui would be a better fit given how the actors in these films seemed to play the same character over and over again.. The Quips and Rewrites also feel like they might get old after some extended play. It also seems like the form factor is a bit off. These games might do better in a small boxed format, like Zombie World or the new edition of Fiasco.

What’s changed then? The art hits the tone much better, with the chapter headers feeling like movie posters right off the grindhouse wall. Developer Matthew Dawkins and his crew write about these films with a clear affection for them. Reading his filmography I found myself nodding along with great enthusiasm. I’m more familiar with this subgenre than the previous entry (though, no Blacula? Really?) The game has been further altered to fit these films and I am excited to see further entries in the series like the upcoming 80’s slasher edition and the inevitable 90s meta edition They Came From Beyond What You Did Last Summer.

What ultimately hooked me was the excellent quickstart adventure The Haunting of Abbeyham Priory by Cat Evans. The rules brief is excellent, the scenario nails the tone, and the characters are a great fit for the genre with a fun twist on what the monster really is. After reading this, I graped elements of the main rules better and enjoyed the game more overall.

If you and your friends love schlocky horror, check out this series of games from Onyx Path.

If you found this review useful, please purchase from the embedded links to support your friendly local game reviewer.
Click to expand...

I ran this game last night, using the jumpstart, at our local game convention in Los Angeles. The Haunting of Abbeyham Priory indeed an excellant quickstart. Overall, the game is fun, and the players last night had a blast.

Oh thank you, I really want to get this read and to the table, I think I have players who would grok this.

RPG Crowdfunding News – Pericle, THEY CAME FROM THE CYCLOP’S CAVE, VHS, and more