Those Who Wanderhome Are Not Lost 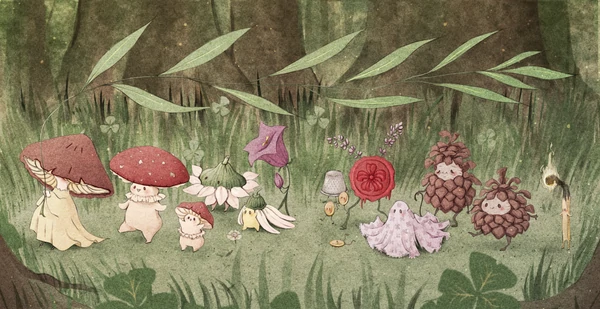 Stories are rooted in conflict. The main character wants something but can’t get it. They must overcome those obstacles to resolve the story. Role-playing games are no different, but more often than not, those conflicts are resolved through combat. Yes, everyone has examples of times when their group went sessions without rolling initiative, but the rules are still included with most RPGs. Wanderhome, by Jay Dragon, exists in the small space of games where combat is almost never an option. It bills itself as “pastoral fantasy” and looks to tell stories of wonder and drama in a fairy-tale world of rolling hills and talking animals. The designer sent me a review copy, so let’s dig into what shines in this book.

Wanderhome uses a system based on the Belonging Outside Belonging engine by Avery Alder and Benjamin Rosenbaum. There’s no math, no heavy rules and there doesn;t even have to be a GM if everyone wants to play a specific character. Play is driven by a token exchange system. Generally speaking, to use special abilities and accomplish goals where the outcome might be in doubt, you spend a token. To get a token, you inconvenience your character or take a moment to describe a detail in the world the other players think is cool. Diceless systems like this usually leave me flat, but the laid-back nature of Wanderhome is a good match for an easy system like this. There are plenty of other games where the dice will tell you if you made the one in a million shot to blow up the evil space station. This game is more concerned with whether or not you’ll make it to the Jazzleberry Festival in time for the pie eating contest.

There are 15 playbooks to choose from for the players to customize. Like Powered By The Apocalypse games, the choices made during the zero session set up stories for the character, relationships with the other players and the state of the game world. Each playbook offers several choices for why your character started the journey the group is on, while also offering plenty of ways that journey might change. You might be a poet looking for stories about your parents and family or just the everyday stories of fellow travelers. Or you could be a ragamuffin learning about how all authority figures can’t be trusted.

The game is set in Haerth and is very heavily inspired by everything from Animal Crossing to Hayao Miyazaki films. The book is full of whimsical illustration and wouldn’t be out of place in a children’s book section in a library or bookstore. The book details the big places and important points of history in the setting but still leaves plenty of room for the players to fill in the gaps. The change of seasons act as the game’s experience progression when players look at additions or changes they might make to their character based on what happened. This game could be a child’s first entry into RPGs between the humble setting and simple rules, especially for parents who want to get them hooked into telling stories early before learning the rigors of D&D.

For adults, there’s still a hint of darkness that looms behind the scenes. Wanderhome stops short of twee storytelling thanks to some intriguing choices that players might make to add some shade to this otherwise brightly tinted world. The teacher may have made a promise to a fish-headed demon that she'd rather forget. The peddler might have a key that opens the prison of the Slobbering God. The Veteran playbook is centered around a character far too used to easy violence and trying to journey to a life where they don’t have to think of it anymore. They are the one exception to the game’s disdain for combat. But if they use their ability to kill the person in front of them, the character must leave the game. Different tables can adjust these elements based on how they want to play, but these act as reminders that fairy tales and legends still have teeth behind the animated films and beautiful books.

The thing that appealed to me most about Wanderhome is the all around simplicity. The mechanics make online play very easy but also play well with your friends around a table. The stories may not be world saving epics forged in battle, but they can still mean a lot to the characters on their journey. The world of Haeth feels good to explore given the difficulty of the past few years. Wanderhome is a reminder that sometimes a good story is about the journey, not the destination.
Last edited by a moderator: Jan 21, 2022
Click to expand...

Wanderhome is truly a delight. It very much lies on the collaborative storytelling end of the spectrum, with the game being to create a most engaging narrative full of introspection, wonder, excitement, coolness, involvement, and growth. I disagree with the common notion that "conflict" is what is required to tell an interesting story (especially, as the article above notes, since that word often gets collapsed into just combat) but rather that "challenge" is the more proper and expansive word, and Wanderhome is great in creating both the canvas and a framework in which to do just that. Moreover, it is not centered so much around external challenges but rather is a game/story about internal challenges. As the characters wander through the world (that you are building as you play) the through line focus is about their metaphysical journeys. They don't have to be heavy journeys per se, the game can be played light and serene. Or it can delve into more serious issues of trauma and recovery if you prefer (with solid tools and advice for ensuring everyone at the table is onboard and up for it).

As you can probably tell tell my group and I thoroughly enjoyed playing Wanderhome and I heartily recommend it!

(And I liked it enough that I also wrote more expansively about it here if you'd like to read some more...)

Well, crud. Another RPG that I'll be buying and probably never get to actually play. Looks delightful though.

I just ordered this game the other day from noble knight. I can't wait!

BrokenTwin said:
Well, crud. Another RPG that I'll be buying and probably never get to actually play. Looks delightful though.
Click to expand...

Good news: you can play solo, too!

Well then. I guess the biggest question now is whether I splurge for the pretty hardcover or not.

A Ruins Of The Lost Realm Review