WotC has posted a video describing the upcoming Unearthed Arcana playtest document which will feature three of the core character classes, each with a single subclass.

This document is the second in a series of Unearthed Arcana articles that present material designed for the next version of the Player's Handbook. The material here uses the rules in the

2014 Player's Handbook, except where noted. Providing feedback on this document is one way you can help shape the next generation of D&D!

Expert Classes. Three Classes appear in this document, each one a member of the Expert Group: the Bard, the Ranger, and the Rogue. Each Class appears with one Subclass. More Subclasses will appear in Unearthed Arcana in the months ahead.

Feats. Feats follow the Class descriptions, particularly feats available to the classes in this document.

Rules Glossary. In this document, any term in the body text that is underlined appears in a glossary at the end. The glossary defines game terms that have been clarified or redefined for this playtest or that don't appear in the 2014 Player's Handbook. 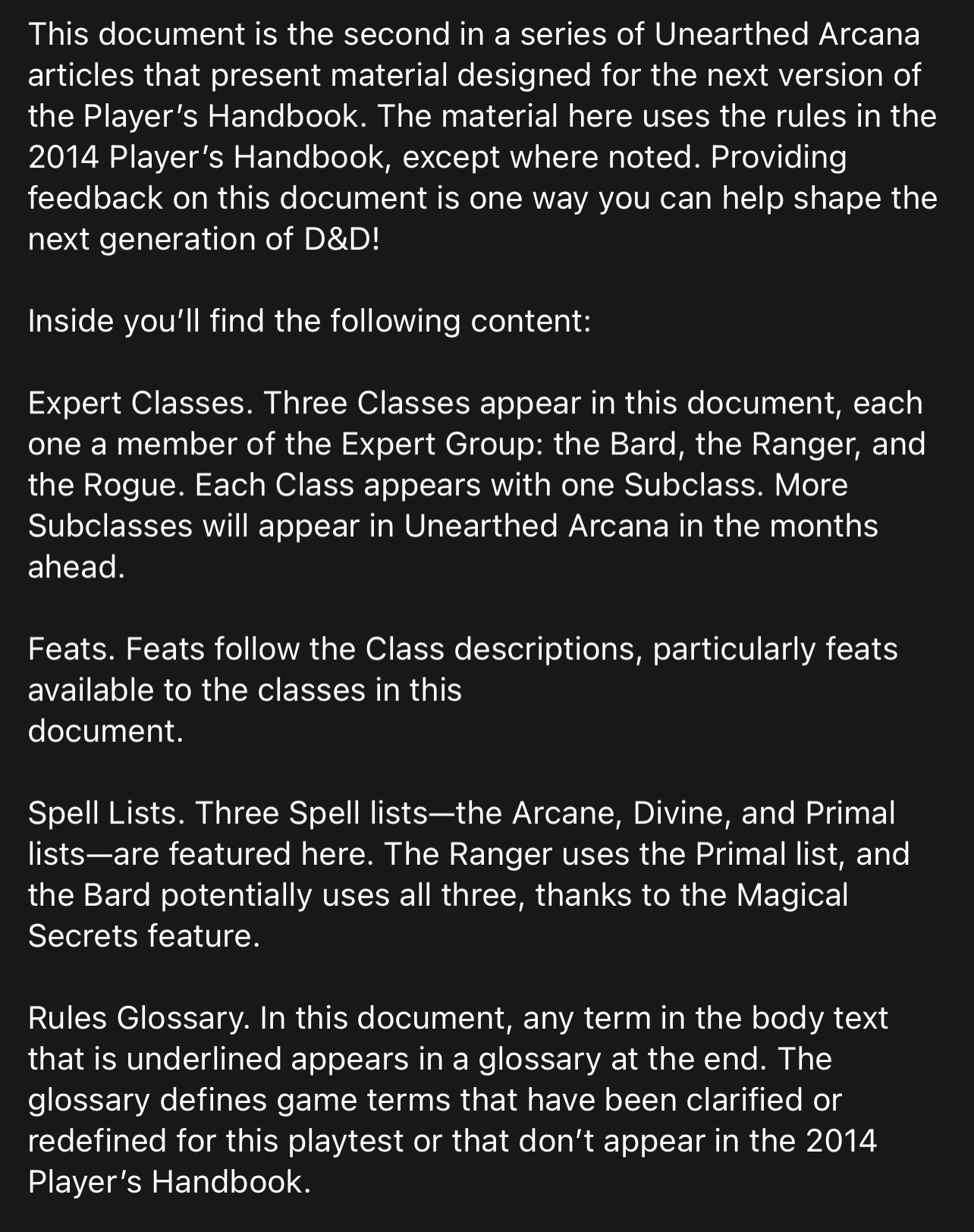 It's inevitable with this stuff.

Nice to see they are trying with different options with crits and inspiration. In this new packet they want to go back to original crits and now you gain inspiration from rolling a 1 instead of 20.

This is a longer one and there will be multiple videos.

Eventually they want to test 48+ subclasses!

What is an Expert Class? First mention I've seen of that.

Kai Lord said:
What is an Expert Class? First mention I've seen of that.
Click to expand...

Seems like the classes that get the super good skill checks, their signature feature will be having Expertise.

So, feats are core at 1st level, but kind of in between from then on. If your table wants to ignore feats after 1st level, you just rule that everyone only takes the "ASI" feat.

They are taking the 12 classes from the PHB and grouping them into groups, which expert is one. This allows for feats and items open to a group and not just one class. It also lets new classes like artificer merge into play by just saying it is an expert.

Not sure on the other groups like fighting or casting- divine or arcane. Be interesting to see where they fit the classes.

He mentioned a Warrior group as well.

I hope “Expert” is more than that. Expertise is about as exciting as a + weapon: useful, sure, but doesn’t really change play style or decision-making, other than giving you more confidence that RNG will come out on your side.

To give an example of what I mean, if I’m playing a wood elf rogue (which I am, currently) Mask of the Wild is a lot more fun/interesting than expertise in Stealth.

darjr said:
This is a longer one and there will be multiple videos.

Eventually they want to test 48+ classes!

darjr said:
This is a longer one and there will be multiple videos.

Eventually they want to test 48+ classes!

So, has anyone actually PLAYED the Expert classes?
2 3 4