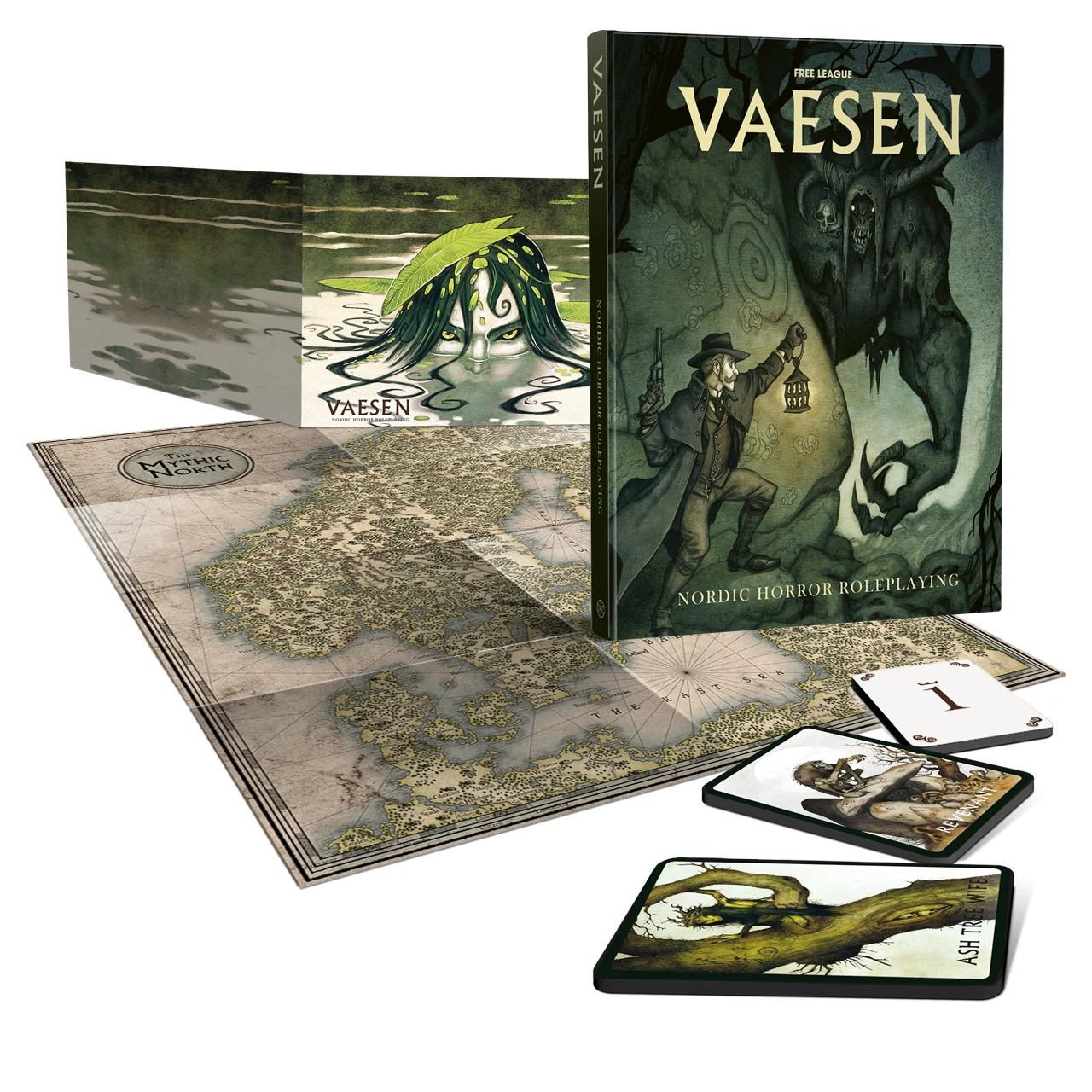 Over the past six years, Free League Publishing has climbed to the top of the tabletop RPG design house ranks. Its games tend toward the darker end of the spectrum, ranging from the Fallout like apocalypse of its Mutant: Year Zero series to the cold survival of its blockbuster game set in the Alien cinematic universe. Free League’s latest, Vaesen, combines several elements of its most successful designs into a monster hunting setting with a historical twist. When the publisher sent along copies of the main book, I couldn’t resist a chance to walk down from fog shrouded streets wearing a deerstalker cap and a holding a bit of cold wrought iron.

Vaesen gets its name from the titular supernatural creatures who have a basis in Norse mythology. It shares its name with an art book, Vaesen: Spirits and Monsters of Scandiavian Folklore by Johan Egerkrans. Turning a gorgeous artbook into a good RPG is nothing new for the designers at Free League. They did it with the award winning Tales From The Loop and are currently working on a Cthulhu mythos game based on the works of Francois Baranger. The art sets the mood for the game, with creepy illustrations that wouldn’t be out of place of a Neil Gaiman comic. Many of the creatures wouldn’t be out of place in an old book of fairy tales, though even the cute pictures always seem to have a hint of menace about them. These aren’t fairies that show in sticker books; they are much more similar to the fey of legend who had a fraught understanding with humanity that, when violated, meant crops burned, loves were lost and children disappeared.

The game uses a variation on the Year Zero system that’s become something of Free League’s calling card. Players assemble a pool of d6s based on a trait plus skill looking for 6s as successes. The meat of the mechanic is the push roll where players can scoop up any non-success dice and try again at some cost, usually an injury condition or narrative complication. It puts control of whether a player wants success at a cost into their own hands. There are also 10 loose classes, each with access to unique abilities. These archetypes all fit classic monster hunter ideas like priests, doctors, hunters and yes, even writers.

Players play characters who have gained the Sight thanks to a close call with one of these ethereal creatures. Now they can see and interact with the vaesen and it's up to them to discover why, in recent years, the vaesen have become angry. The book keeps the specific reason open-ended but suggests everything from the encroachment of industry and technology knocking the balance of human and vaesen knowledge out of whack to someone forgetting to honor centuries old compacts. The book brings the players together as part of The Society, an organization of people who have developed the Sight and try to protect normal people from the vaesen. But even that is a mystery to be solved. Why has their headquarters been abandoned for a decade? Why is there only one survivor from that era? Why does she spend her daylight hours in the local sanatorium?

As the players investigate cases, their characters stay fairly static. Instead, much of the development goes into a shared NPC: Castle Gyllencreutz. Players acquire development points after mysteries and use those to unlock elements in the castle like rooms, personnel who work at the castle and contacts in the greater world who are sympathetic to your cause. Many Free League games have a base building element to them but I think this my favorite implementation of it so far. These choices offer both mechanical and narrative elements, such as a dungeon where NPCs can't escape without help or a coachman who drives players to a location and allows them to heal conditions when they switch locations.

Mysteries abound in Vaesen and they are supported with good advice and mechanics. The Vaesen are formidable opponents but they can be defeated once the players discover two important elements; a ritual that can dispel them and the secret element of the ritual that folklore doesn’t mention. The game encourages GMs to clue the players in on how to defeat the monster while also having them plot out what will happen if the monster runs amok interrupted. The countdown offers ways to keep the plot moving if the players hit a dead end by suggesting what happens next if the players do nothing.

Vaesen offers a great take on what might otherwise be called “Victorian horror” even as it maintains a Nordic focus. There’s an adventure in the corebook and a collection of cases called A Wicked Secret And Other Mysteries, but it wouldn’t take much to convert any horror scenario set in this era to be a Vaesen mystery from products like Cthulhu By Gaslight. There’s even a brief discussion of vaesen around the world for those of us who own Ravenloft: Masque of the Red Death material they might want to use with something other than AD&D. Vaesen is a solid supernatural mystery game that stands out because of well-done mechanics and unique flavor.
Click to expand...

I'm getting this for Christmas. Can't wait.

Arilyn said:
I'm getting this for Christmas. Can't wait.
Click to expand...

I'm running it already. It's very well done. Adventures in 5 phases
1) an invitation
2) prep before leaving (usually a few research rolls, sometimes purchases)
3) Travel with continued prep (which provides a 1 use bonus for phase 4)
4) The adventure itself
5) back to the castle, upgrades of PC's and the Castle.

If you're running it, the scenario book is also excellent.

I agree. The RPG is very good.

We also tend to add a step before the invitation dealing with personal scenes around Upsala and dealing with any threats that have arisen.

Skywalker said:
I agree. The RPG is very good.

We also tend to add a step before the invitation dealing with personal scenes around Upsala and dealing with any threats that have arisen.
Click to expand...

I just throw those in whenever feels right for the session. One of my players is going to have, in the middle of The Night Sow, her half-vaesen child cause problems...

Vaesen – Mythic Britain and Ireland: A Deeper Look At The Game And Latest Kickstarter