Fall of London from Modiphius Entertainment is the sixth book supporting Vampire: The Masquerade 5th Edition. Developed by Matthew Dawkins and Steffie de Vaan and written by Klara H. Herbøl, Kira Magrann, Mike Nudd, Andrew Peregrine, Hilary Sklar, and Steffie de Vaan, this Chronicle fills in the history of the city’s fall while presenting the first substantive view of Modiphius’ work on the lore. It joins the core rulebook, the Anarch sourcebook, the Camarilla sourcebook (those three done under Paradox Interactive’s White Wolf), Onyx Path Publishing’s Chicago by Night, and the recently released New Blood Starter Pack (seventh if you count the The Monsters: A Vampire: the Masquerade 5th Edition Quickstart). Steffie de Vaan, co-developer of the book, joins me to answer a few questions about the project. 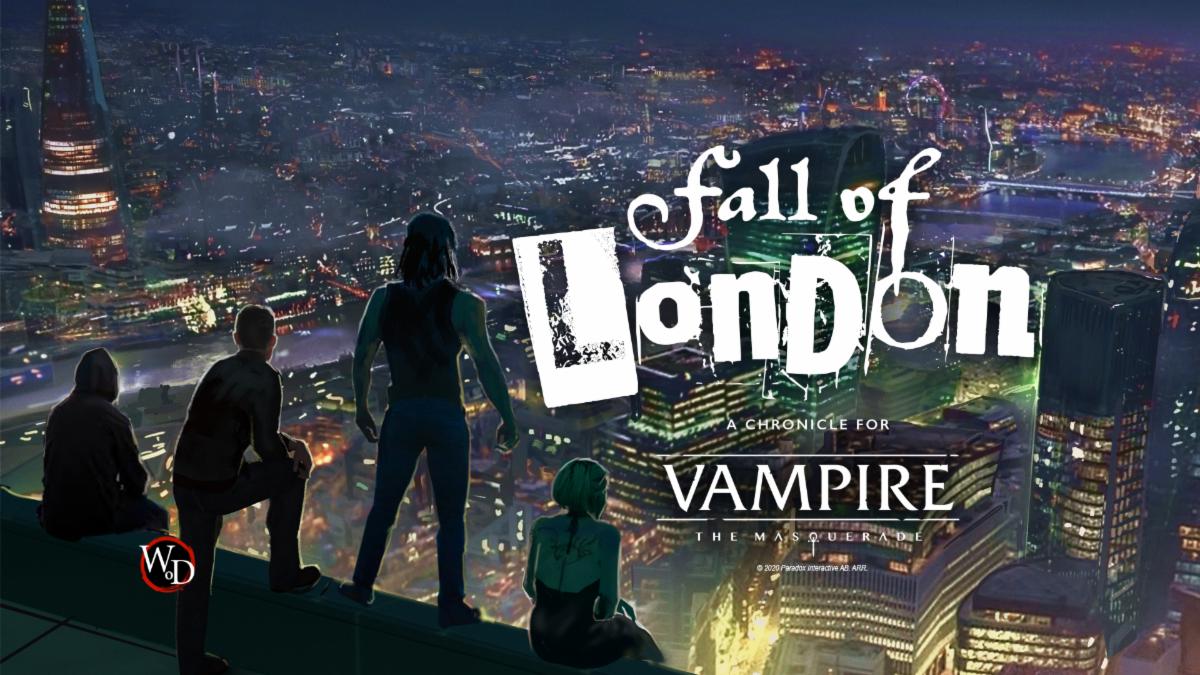 EGG EMBRY (EGG): Thank you for talking with me about Modiphius Entertainment’s Vampire: The Masquerade 5e – Fall of London. What is this book about?
STEFFIE DE VAAN (SDV): Fall of London is a chronicle book set in 2012’s London. That’s right before London falls to the Second Inquisition, kicking off global vampiric panic. It’s also when Mithras returns from being diablerized. Both of those play a big part in the chronicle. The player characters start off as agents of Mithras. How they end though, is entirely up to them. I’m #teamanarch myself, as most people know by now, so I know which way I’d go.

EGG: Who are the creators involved?
SDV: We have Matt Timm with Modiphius serving to keep all of us—the people on the book, the people from Modiphius, and the people at Paradox—connected. Then we have a fantastic team of writers: Klara H. Herbøl, Kira Magrann, Andrew Peregrine, Hilary Sklar. Mike Nudd doubles as writer and London consultant, making sure what we write lines up with actual London. Then there’s me (Steffie de Vaan) and Matthew Dawkins working as developers, making sure the chapters all line up with each other and match V5 canon.

EGG: You have the advantage (or possibly the burden depending on your point of view) of attributing real-world events from today to this campaign. Are you weaving facts into this fiction?
SDV: Most of Fall of London is set in 2012, so that was well before our tumultuous present. I did have a bit of an “oh” moment when I realized Boris Johnson was mayor of London at the time. So he gets a namedrop in the book, but nothing further because honestly.

EGG: Mechanically, what does the book include? Artifacts? New Merits? Fully-stat'ed NPCs? Maps?
SDV: We have 6 new Loresheets, a new twist on the Memoriam mechanic, 5 premade characters and fully statted NPCs (including some classic Elders!). For London content, in addition to the chronicle itself, we have maps, an “After the Fall” for 2020’s campaigns, and lots of details on how the city works.

EGG: Are there any Easter eggs drawing in other World of Darkness properties like Werewolf, Mage, etc.?
SDV: If there are, the writers didn’t tell me. Doesn’t mean they’re not there of course, but that’s the whole point of Easter eggs—people need to find them on their own.

EGG: This ships in March 2020, but if you pre-order now, you get the PDF immediately. Is the PDF the final version or a draft?
SDV: We’ll correct typos and such if readers find them. But apart from that, yeah, the current PDF is the same as the planned book.

EGG: Can you tease any other forthcoming V5 products? Where can fans learn more about Modiphius Entertainment and Vampire: The Masquerade?
SDV: Let me link you for V5 at Paradox, Modiphius, and Onyx Path Publishing. Those are the places to check for V5 tabletop roleplaying game products. As for teasing upcoming products, that’s above my pay grade. Let me send you back to Matt Timm….

MATT TIMM: Hi Egg! I’m Matt Timm, I am Assistant Line Manager on V5, and I participated in the production of Fall of London. We are working on other products, but at the time I can’t reveal much. Keep an eye open for our announcements! 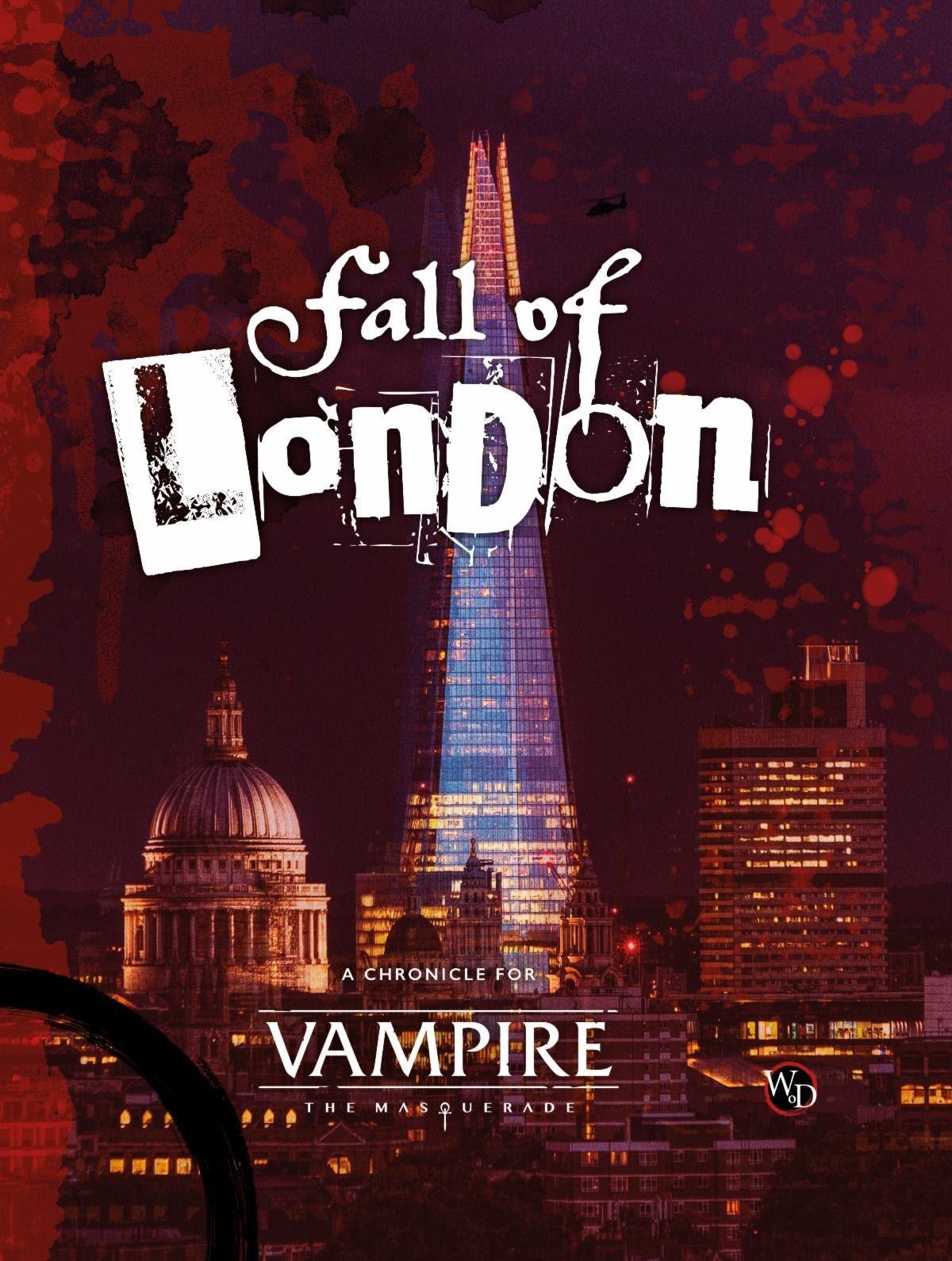 “The Fall of London is a Chronicle set in London in 2012, exploring the events that led to the canonical destruction of the city’s Kindred by the Second Inquisition. It is centered around a group of members of the Cult of Mithras who are awakened during the turmoil to retrieve five ancient relics of the Kindred god-ruler of Britain...Expected to ship in March 2020."
Click to expand...

Egg Embry participates in the OneBookShelf Affiliate Program. This program provides advertising fees by linking to the Storytellers Vault.

Some days ago I bought Changeling: the Dreaming 20 Anniversary Edition, and I wonder about the possibilities of an (25?) anniversary edition for the other lines (Kindred of East, Hunter, Mummy, Demon..). And why not?

LuisCarlos17f said:
Some days ago I bought Changeling: the Dreaming 20 Anniversary Edition, and I wonder about the possibilities of an (25?) anniversary edition for the other lines (Kindred of East, Hunter, Mummy, Demon..). And why not?

U* YOU BLOODSUCKERS! MAKING INQUISITION GREAT AGAIN!
Click to expand...

Modiphius’ licence is just with Vampire: The Masquerade.

Onyx Path Publishing are probably busy with publishing what they have at the moment, and this includes the Chronicles of Darkness lines (and others too). The various 20th Anniversary books are essentially done, as far as I am aware, and they’d have to get licensing permission from White Wolf/Paradox to move on.

Kindred of the East is a Vampire supplement and there isn’t as of yet any indication whether it will remain ‘canon’. The Hunter supplement for Vampire will be the mooted Second Inquisition sourcebook, effectively. In terms of Hunter: the Reckoning and Demon: The Fallen, I think it’s touch and go as to whether these titles will be something White Wolf/Paradox is interested in investing in.

And It's going to be coming to Fantasy Grounds soon also.