Bloody Gates and On the Wings of Valkyries are war-torn adventures for Wrath & Glory. The PCs are Imperium soldiers experiencing the worst war throws at them. These adventures are visceral and bloody, fitting the theme and genre perfectly and melding rules and roleplaying into a seamless experience. 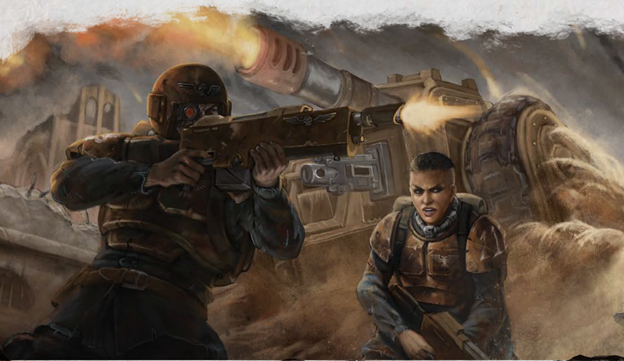 Thanks Cubicle7 for providing me with PDFs of these excellent adventures for review. In the grim darkness of the far future there is only war.

In Bloody Gates, the PCs are Tier 1 Imperium troopers like Guardsmen as well as criminals sentenced to serve in the Gravediggers’ Penal Brigade. The Gravediggers have to assault and take back the rebellious hive city, Tora Armis, on the Hive World of Gilead Primus. The PCs are expendable cannon fodder but if they earn glory, they may also earn their freedom.

On the Wings of Valkyries is for Imperium Tier 2 PCs such as Tempestus Scions, Space Marine Scouts, Adepta Sororitas, or a mixed force. They swoop in over the battlefield as Bloody Gates is close to wrapping up. When the rebellion overran Tora Armis, a rogue psyker named Raurok seized control of the top levels of the hive spire. He plans to summon a Warp storm to devastate the forces surrounding the spire, and it is up to the PCs to stop him.

Both adventures use the push and pull currency of Wrath and Glory (PCs succeeding at tasks that further their mission and glorify the Imperium) and Ruin (used by the GM to power enemies and brings battlefield ruin to the PCs). Long term, the PCs also earn experience points but Wrath, Glory, and Ruin affect the battle at hand directly.

These adventures resonate with me in a way many adventures do not. I have read dozens of adventures and many are quite good. But these Wrath & Glory adventures capture the moral weirdness of war as well as the blood and guts, the terror, and even the thrill of hard-earned victory.


For example, in Bloody Gates, Commissar Shrake may come across some broken troopers (depending on what the PCs have done). He will use threats to get them back into battle and even try to kill their leader to restore discipline. While this seems cruel, even savage, it is necessary to prevent the GM from gaining Ruin. If the PCs fix the problem themselves, they gain Glory. If they hide the broken troopers or allow one of them to kill the Commissar instead, the GM gains Ruin. The rules directly reflect the tough reality of war. The Commissar is correct in his actions as he trying to prevent Ruin. But the PCs can make things even better and gain Glory with no executions if they take the initiative. The combination of tense roleplaying, a challenging event, and the rules is wonderfully presented and joined together into something greater than the sum of its parts. I am impressed.

However, the PCs cannot just be random killers without consequences. Later in the adventure if they open fire on Imperium citizens fleeing towards their lines, the GM gains 2 Ruin. The Imperium troopers have a mission and going against that mission generates Ruin which can lead to defeat.
Wrath & Glory can take some getting used to if you’ve played Fantasy Flight’s 40K RPGs. There are no ship stats and space travel and space combat are abstracted or ignored all together. However, after reading excellent adventures like these, I have been won over to the system and see its glorious merit.

Also, if you’re looking at a way to change up from playing Dungeons & Dragons or Pathfinder, Wrath & Glory will seem familiar to your players. A small group of highly skilled individuals fight enemies to achieve their goals and win experience points. Wrath & Glory is the perfect way to branch out from fantasy without having to learn all about ships and ship combat.

And the adventures are amazing. You will feel the mud and smell the stink of gunpowder and worse, hear the gunfire and explosions, experience the blood and horror, and your world will narrow down to the next minefield you have to clear or the next gate you have to take over as you struggle to keep your buddies alive. And maybe, just maybe, you’ll find glory and stop ruin from coming to the Imperium. Bloody Gates and On the Wings of Valkyries live up to the idea that in the grim darkness of the far future there is only war. And war is hell.
Click to expand...

We've played 6 games of W&G so far and I've enjoyed them. I'll pass this info to our GM.

Marc_C said:
We've played 6 games of W&G so far and I've enjoyed them. I'll pass this info to our GM.
Click to expand...

Sadly, that would spoil the published adventure plots. I'm an imperial guard. I use how I hold my weapon to show my mental disposition. I don't talk much.

Are these releases only in pdf format or will they be published in physical form as well?

Thanks @Charles Dunwoody for the write up! The adventures sound really cool. I'll have to pick them up.

Psikosis said:
Are these releases only in pdf format or will they be published in physical form as well?
Click to expand...


Right now it looks like PDF only. I'll ask if a print version is coming. Cubicle 7 website