Kickstarter We're tired of being taken advantage of in this soul-crushing galaxy...

"We're tired of being taken advantage of in this soul-crushing galaxy.
The mega corps get relief funds. We get to work the relief shifts.
They report record profits. We report record hours.
Now we are free. Now we will report our own record profits.
Right from the coffers of the corps."

Freelancer's Guide to a profit-focused living is a deckbuilding tabletop roleplaying game about making a living in a megacorp ruled galaxy. You and your crew will create great plans the like characters in movies like Ocean's Eleven and Now You See Me, and then execute those plans like the characters in shows like Cowboy Bebop or Firefly. 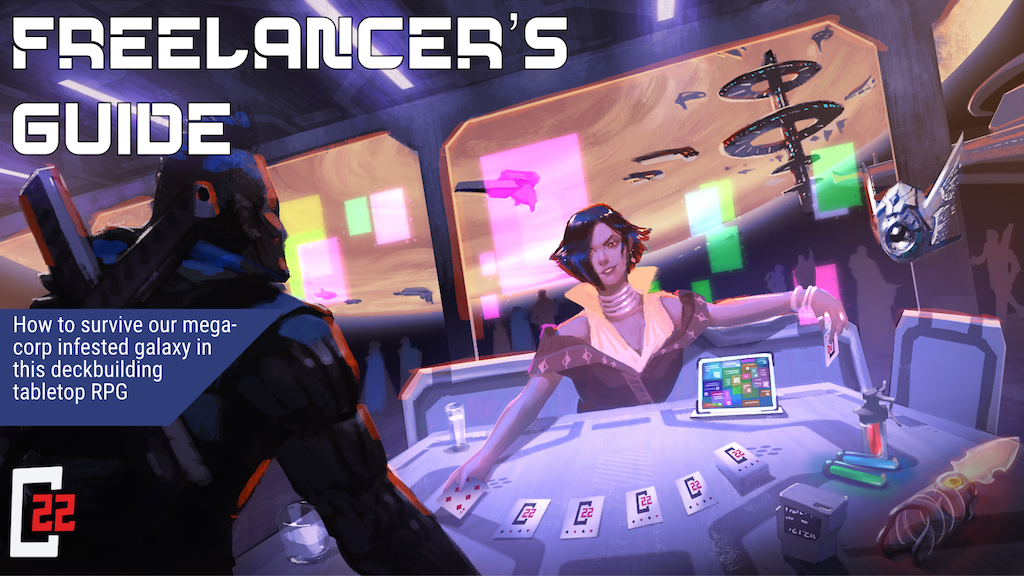 "Saving money for easy living" is the garbage Tramlaw shovels down society's throat. The truth is that are saving money for themselves. They sell the cheapest things: cheap for you to buy and cheap enough to break after a few uses. They have their fingers in a lot of pies in the galaxy, and they're always trying to reach more.

Everything flows through the Big River as they say, and honestly there's some truth to that. Big River is the largest distribution company in the galaxy, accounting for over 65% of all packages shipped. They have expanded their reach and have been gobbling up small stores on the frontiers so they can sell a wide variety of goods in many locations.

The galaxy’s largest military is a corporation. Milcom fuels the “war” between the Yents and the Humans, the Klebian Civil War, and the Nixxian’s expansion into the frontier. Some say they’re the only reason that the wars continue because war is good for business.

Items
Freelancers live and die by their equipment and one of the fastest ways to be forced back to corporate slavery is to get overcharged on a piece of equipment. Here is a small peek at some items you will use on your missions.

News Digest for the Week of March 27