D&D 5E What 5E Books Should I Buy First

The attached poll is a list of the books for 5E that I do not own. I feel like bolstering by library, so I figure I would crowd source the order in which to get them. Note that I limited folks to 3 answers just to avoid folks voting for all of them. If it isn't on the list I either own it or am not the least bit interested.

By the way -- use whatever criteria you think and explain in the comments if you desire.

If you get the Spelljammer: Adventures in Space set, make sure you have the Ghosts of Saltmarsh book.. The ship/crew rules are in Saltmarsh.

The only one on that list that I'd really consider a worthwhile purchase is the Essentials Kit, and even then it's not really for experienced players.

Weiley31 said:
If you get the Spelljammer: Adventures in Space set, make sure you have the Ghosts of Saltmarsh book.. The ship/crew rules are in Saltmarsh.
Click to expand...

Also -- they didn't reprint the rules for ship in Spelljammer?

Supporter
Went with Tasha's and Mordenkainen's which are just universally useful whatever your 5E plans are. Third pick was a crapshoot but I went with Radiant Citadel since in another thread you had expressed interest in short-form adventures and most (not all) of the ones in that book are good.

I would recommend Wildemount, Theros, and Ravnica in that order as very solid setting books but the primary usage is if you really want to run those settings (with a couple of caveats: Theros has some fun new mechanics that are transferable and is a good toolkit in general for running a classical mythology based campaign, and Wildemount has the Heroic Chronicle idea which is a great tool for backstory generation). Strixhaven is weaker than these three, and also as much an adventure campaign as a sourcebook (and not a great one).

Tyranny of Dragons is imo a somewhat maligned and underrated campaign, but still in the bottom half of official campaigns.

Essentials Kit is going to offer you nothing you don't already have at this point, and the included adventure, Dragon of Icespire Peak, is weaker than both Lost Mine of Phandelver and the new Dragons of Stormwreck Isle (in the new Starter Set). It does have the sidekick rules, but a more developed version of them also appears in Tasha's.

Re: Saltmarsh. It's quite good and I love the Saltmarsh setting. As an adventure collection I think Journeys Through the Radiant Citadel is better as I think Danger at Dunwater and The Final Enemy are unplayably bad, and Salvage Operation and Isle of the Abbey are unremarkable. However, the other 3 included adventures and all the supplementary material is good to great.

Also -- they didn't reprint the rules for ship in Spelljammer?
Click to expand...

Nope!
The only thing they have listed for the Spelljammer ships are HP, Crew, Damage Threshold, Speed, Material(AC), the weapons listed on there, Speed, Keel/Beam, Cargo, and Cost.

The weapons are listed with their own Armor Class, Hit Points, Costs, and how Many actions it takes to use said weapons. That's it. No mention of helms/Sails(for ships that it makes sense for), or stuff like that.

Not a single mention of stuff like Captain, Quartermaster, First Mate, Bosun, and other positions. There is a sidebar style box on pg.25 of the Astral Adventurer's Guide that states Shipboard Weapons are better for far away targets and when in close range, your PC's weapons/spells are better. Now, considering the Spelljammer ship weapons require more than one action to load/use, that makes sense...........................................Unless you have Acquisitions Incorporated/Ghost of Saltmarsh, which states that Ships can make THREE actions along as they have a high enough crew levels. Which means that using Shipboard Weapons won't "actually" be that annoying to use compared to how it was stated earlier.
Also: no Spelljammer ships have any ability scores. Not even STR/DEX/CON that ships usually have scores in. And of course, nothing is mentioned of stuff like Crew Quality scores, Downtime, Ship upgrades or even the possibility of a Mutiny.

Honestly, if it probably wasn't for the 64 page count, it's quite possible that the GoS ship rules would've been reprinted.

So yes, Ghosts of Saltmarsh will greatly enhance your 5E Spelljamming in a number of aspects.
Last edited: Aug 22, 2022

Ironically, the crossover books have some great stuff to cherry pick for your main 5E games too. So those three are good choices. Yes, I'd also say that even Strixhaven is good for cherry picking too. I low key think that Witherbloom's UA college features actually make some nice stuff to add to a Witch type character.
Last edited: Aug 28, 2022

Supporter
Unless you think you want to actually play in the settings you listed (or just want to read them for entertainment's sake)... I would say just go with the books that would have most universal usefulness-- Tasha's, Radiant Citadel, Monsters of the Multiverse.

Essentials Kit to me would only be truly useful if you were going to run Phandelver again so that you had more locations in the area to go to. But if you were going to do that... then I'd say to also pick up the 4E Neverwinter Campaign Setting, because that has even more locations north of Phandelver that will broaden the scope of a Phandelver campaign. Of course... we now know that if anyone actually wanted to run a fuller Phandelver campaign, they probably should wait until the actual Phandelver Campaign book gets released next summer, as it probably will have the Lost Mines and Icespire Peak adventures in it (plus who knows what other additional stuff Perkins adds to the area.)

Tasha's to get more character options.
Monsters of the Multiverse to get the revised creature stats and race options.
The others I couldn't vote for, because campaign settings aren't my teacup.

But are they perhaps your teaspoon? Hmmmmmmmm?


(Don't ask, I have no idea what I mean with this comment, I just found it funny in my head, LOL.)

DEFCON 1 said:
But are they perhaps your teaspoon? Hmmmmmmmm?


(Don't ask, I have no idea what I mean with this comment, I just found it funny in my head, LOL.)
Click to expand...

I have gotten stuck on this expression after a friend of mine (a nonnative English speaker) mixed up the idiom. Ever since it is "not my teacup" instead of "not my cup of tea."

For the character options, extra monsters, and awesome setting. Even if you don’t use Wildemount straight, there’s a lot of locations, factions, plot hooks, adventure seeds, NPCs, etc you can slightly reskin, or just rename, and drop in anywhere.

Reynard said:
By the way -- use whatever criteria you think and explain in the comments if you desire.
Click to expand...

Otherwise, I would save my money and not buy the others.

I went with Monsters of the Multiverse - but only if you don't already have Volo's or the older Mords.

The others are really a case of "what are you in the mood for?" and would be based on what sort of campaign you want to run - always a personal choice.

I left out Tasha's. I was really disappointed with the book, and didn't find anything useful in it for my game. I wish I hadn't bought it, actually. 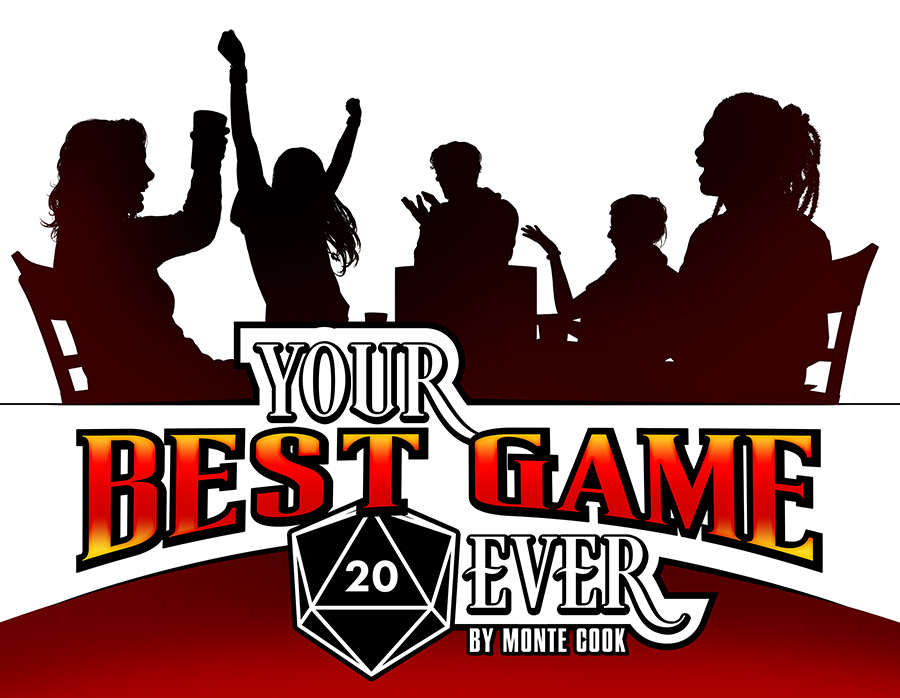 Unlock the secrets of consistently awesome RPG experiences—for players and GMs! We’ve all had them: games where the party clicked … Your Best Game Ever

Tashais the real must-have here, with a solid selection or Subclasses thst get a bit weirder than Xanathar's, and tons of DM tools.

Monsters of the Multiverse is just about worth it for the new art, but having a consolidated update of most of the Raves in 5E to OneD&D format in one place us quite handy.

As a Wildcard, I'll suggest Ravnica. It has a huge bestiary, that is full of some wild and out there for D&D ideas. The dungeon maps and adventure generation tables.are up there with eberron (both by Wyat, following a similar format). More of a "Urban Fantasy" construction kit than a "Setting" as one might normally consider it.

Reynard said:
The attached poll is a list of the books for 5E that I do not own. I feel like bolstering by library, so I figure I would crowd source the order in which to get them. Note that I limited folks to 3 answers just to avoid folks voting for all of them. If it isn't on the list I either own it or am not the least bit interested.

By the way -- use whatever criteria you think and explain in the comments if you desire.
Click to expand...


I chose Wildemount, because I prefer how they present the races and such in the book. In truth it could be a toss up between Wildemount and Mordekainen's.

If you are an Exandria fan it shouldn't even be a question. Get Wildemount. If you enjoy Exandria, that's what you should get point blank.

If you are interested in lore and a world, get Wildemount.

If you don't care about that stuff, hands down it should be the other choice. You should get Mordekainen's as it gives you more monsters and races. There's not much lore or anything else, but it does have a lot more races and monsters than any other book, including races that ARE monsters that you can play (overall...I don't really go for playing the Monsters type game though many do).

One caveat though, if you already have Volo's and Xanathar's...I wouldn't get Mordekainen. It's basically just a repeat with changed stats of those two books, but not as much lore or other material in it.

Tasha's is undeniably the biggest option of the books you list. It adds so many options to the game it's basically the Unearthed Arcana of 5e...it's just called something different.

I also chose the Essentials Kit because it's a great introduction overall, and for those learning the game, it's probably has the most content but in a simplified manner making it an easy book to utilize for those just starting out.

Edit: Got confused between Wildemount and Rising from the Last War (which is the one I would put over most of the other books except Tasha's...etc).
Last edited: Aug 28, 2022

GreyLord said:
I also chose the Essentials Kit because it's a great introduction overall, and for those learning the game, it's probably has the most content but in a simplified manner making it an easy book to utilize for those just starting out.
Click to expand...

Shout out to the Essentials Kit for coming with a digital copy alongside the box.