D&D General What are you prepping for your next D&D session? (+)

So far they've been at a Waterdeep probate lawyer's office to go over the details of a character's considerable inheritance, to the inherited estate where food and supplies are secured, through the looking glass upstairs, into the Outlands where they discover the world is much stranger than they supposed, into Sigil where they discover no, it's even stranger than that, and now back into the Outlands where this Tuesday they'll watch the wheels come off on pretty much everything.

Then we get to have our adventure.

Actually, looks like I'm going to be running a Star Wars SAGA one-shot, with the possibility it becoming a long term campaign.

I wil be loking to modify the rules with some 5eisms, and it will be set in the Mandalorian timeframe, with a lot of Legend continuity. May use some information from the Sequels, but I'm not considering it to be canon - the future isn't written in stone.

Most likely the group will be dealing with Imperial remnants, with hints of Thrawn and remnants of Operation Cinder possible. But I'm holding off on futher plotting until characters are complete.

My group recently finished an adventure into the lair of the mad mage. I asked them what they want to do next (I've given them several options), but I haven't heard back from them yet. Next week is Easter, so I figure that we'll be skipping a week.

I have almost finished the dwarf outpost, but this week my PCs demonstrated a strong desire to reverse direction and leave the underdark… they are 8th level, but a group of 14 dwarves, whom they have the drop on(!) have them intimidated. Ugh!

The PCs find themselves helping to defend a roadhouse and the family that runs it (refusing to flee danger) against a near army of goblins, ogres, and trolls. We left off as the first wave was being taken care of and the next wave is arriving and while my prep has been done for this adventure for weeks, I have decided at the last minute to swap out some of my goblins for the MCDM goblins included in the preview for Flee, Mortals! in order to give them a try.

"We eat gods for breakfast!"

I already had spell cards made up for all of the 1st level magic-user, cleric, and druid spells in BECMI. But now that two new players both rolled up artificers, I need device and gadget cards for my artificer class.

The Players will be enjoying some R&R in the Hutaakan village of Byxata. Here's what I have planned:

You will be spending at least the next two weeks in Byxata. I have listed the 5 or 6 Events that will be happening during this time. This is also a chance for you to interact with any NPCs or perhaps craft an item or two (if you have the skills)

When: Upon your return to Byxata.

Where: Priests' Shrine at the village center.

Why: For being awesome

WTF: "Silvered" Weapons and items are crafted with a steel & silver alloy. Only a Master Smith with the right equipment can make them. Silvered weapons provides no bonuses, but they do act as magical weapons in regards to a Monster's immunities and resistances. Flecks and veins of silver reflect the light off of this polished metal. These weapons are obviously valuable to any onlooker.

When: Night on three different occasions

Where: On the other side of the village. The Characters hear the screams of Kartoeba's victims, but the creature is gone by the time you reach the scene and only a trail of blood and green&yellow slime leading to a crack in the wall remains to be found.

Why: Kartoeba craves the souls of living.

WTF: It stalks the valley seeking victims both inside and outside the villages. Despite its size, Kartoeba can move silently, climb sheer surfaces, and dissolve its way through wooden doors. There seems to be a network of fissures and tunnels under the surface of the valley that allows Kartoeba to strike from anywhere. Foredz tells you that it's lair is underneath the Temple of Pflarr.


(3) BISTEK HAS A SPECIAL FRIEND NOW

When: Night. Within the first week of Downtime.

Where: In Bistek's head while he's dreaming

What: Bistek is shown an image in a dream and a deep, heavy voice says these cryptic words:

"When you see these confines, then you will be beyond the event horizon.
Fear not the betrayal. The Betrayers only betray themselves.
Click Subscribe and follow me for more tips and tricks! #Sekolah4ever"

'these confines' refer to this image: 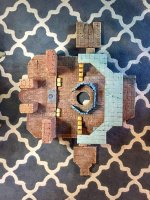 Why: Gives Bistek A good reason for becoming a warlock

WTF: ok, this is just an excuse to show off my dungeon terrain build.

When: Mid afternoon, during the second week of Downime. This is after you have received your Silvered Weapons and Balthazar and Bistek have Leveled Up.

Where: The ambush occurs outside of the walls of Byxata. Hutaakan guards on the 20 foot high wall can easioy see the ambush, but the encounter is 2000 feet away. The players

Who: A full war band of Cavemen foot soldiers and Giant Lizard Cavalry are ambushing a smaller war band of Hutaakans who are escorting Caveman prisoners.

Why: This quickly escalates into a full scale battle and it becomes apparent that the winner of this battle will tip the overall scales of power into their favor. In short, whoever wins the battle will win the war. The Characters + 2 Rakasta Riders + 2 Tigers will be facing off with Cavemen and Giant Lizards. The fate of the valley is in your hands.

WTF: Here's your chance to get an exotic mount. These Giant Lizards are domesticated

When: Occurs a few days after AMBUSH! and only if you win the battle. It's night time and there are no Hutaakans around

Where: A quickly constructed hut that's being used to house a prisoner.

Who: Caveman prisoner and up to 3 characters.

Why: This is your opportunity to get the Caveman's side of the story.

WTF: Not sure if there is anything gain from talking to the prisoner, but I wanted to give you the chance.

When: After you are finished with Downtime.

Where: The Temple of Pflarr is about 6 hours travel from Byxata.

Why: #1 Perform the Ritual to cleanse Temple. This will remove the Undead threat. #2 Face Kartoeba (a.k.a. The Guardian of Najar) #3 Find the tunnel passage to the Shrine of Rajas'el-Najar.

Curently working on the wilderness map for a West March. It still needs more caves and ruins close to the starting town with modest but still interesting challenges.

D&D General How do you schedule your D&D sessions?
2